This story is largely concerned with lightpackers, and the reader may discover much of their character and a little of their history. Lightpackers are an unobtrusive people, with small backpacks of surprisingly fine materials and light weight. They love to walk in the outdoors, and know their way through the wilds. They like to keep their trail life and gear simple, and shy away from what they call the "Ultra Heavy" backpackers.

Six of these lightpackers set out on a quest to forge a fellowship and walk the wild lands of Vålådalen, enjoying camaraderie on the trail and around the campfire. Like many other backpackers, they enjoy a hearty meal and firewater, the wide views from mountain tops and the sound of rivers. The sound of hooting owls and ptarmigans flying through their camp, reindeers eyeing them cautiously and mountain hares running away were sights to be enjoyed in this remote area, and made them smile. 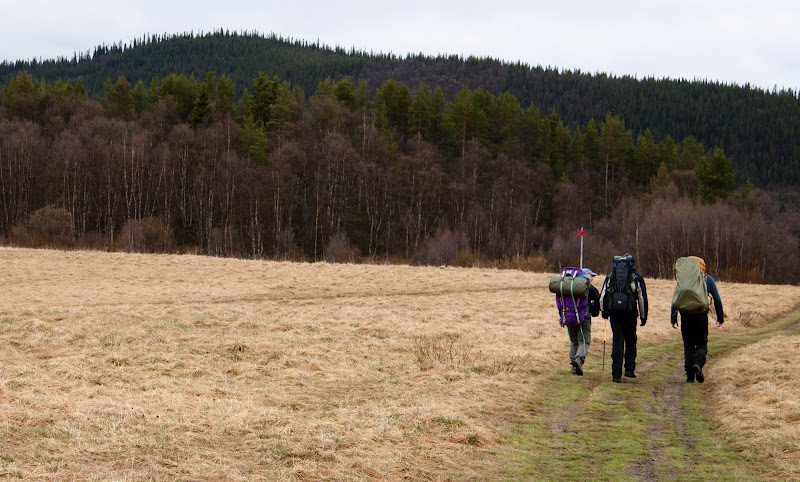 Example of Ultra Heavy backpackers, staying in huts, mind you.

When Legolas of Finland announced that he would be searching the companionship of fellow nordic lightpackers with a hike of special magnificence, there was much talk and excitement. Five fellow lightpackers were invited, Gimli from Denmark, Aragorn and Gandalf as well as Merry from Sweden and Pippin from Norway.

Much preparation went into this party, and the six heros of this tale spent countless hours planning and communicating about their journey. Merry went to great lengths to acquire fine rucksacks and walking poles made by Gossamer Gear, while Aragorn and Gandalf brought a stealthy home away from home. Merry and Pippin welcomed the days in their yellow shelters while Legolas' shelter was the same colour as the sky, and his rucksack was made of the lightest & blackest threads from a much sought after southern craftsman. 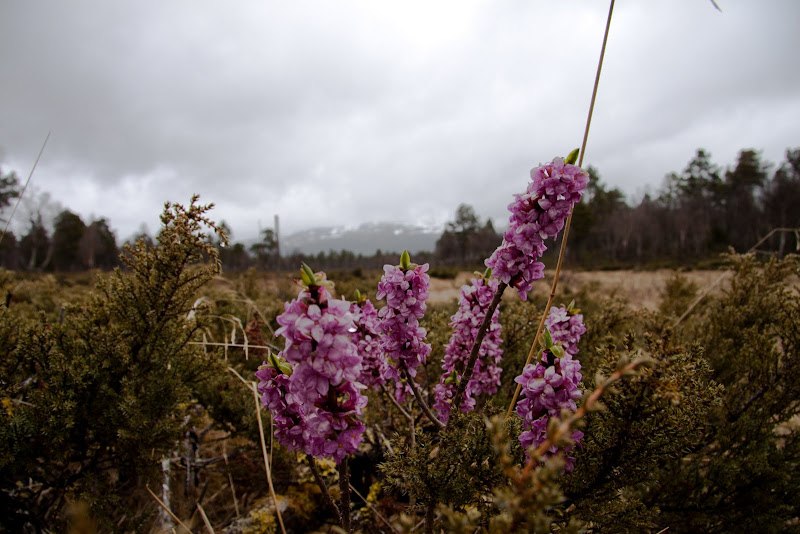 "You ought to go quietly, and you ought to go soon," said Gandalf. But the party made no sign of getting ready to leave the trailhead, where they were repacking their backpacks. To tell the truth, they were very reluctant to start - the sky was grey and the clouds were full of water, and the comfort of a warm building seemed a more desirable residence. After much deliberating the party left the trailhead, and walked off into the wild. 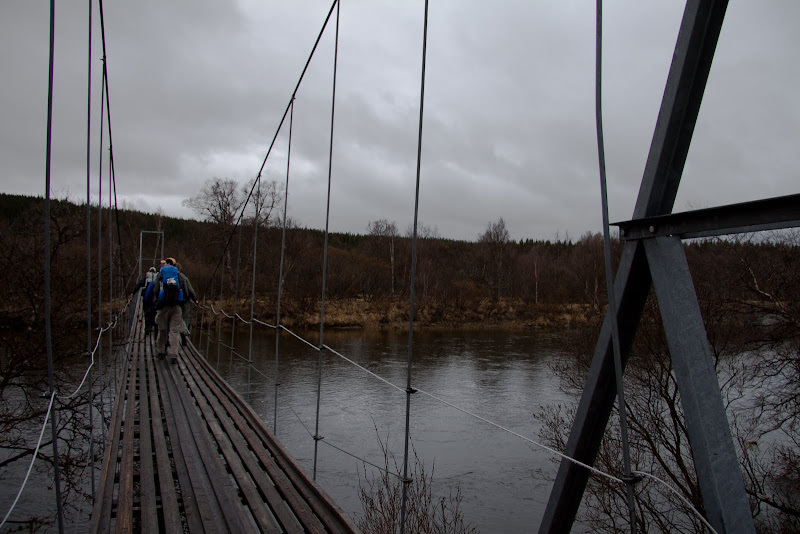 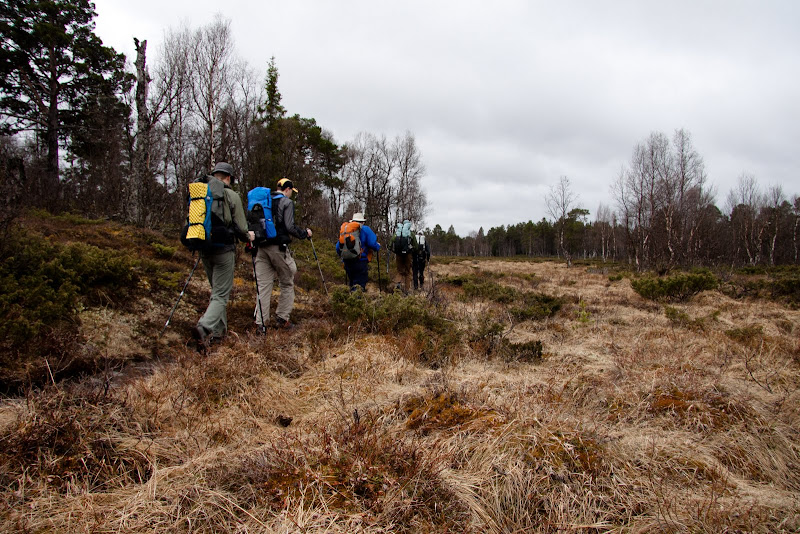 "I have been so taken up with the thoughts of leaving the trailhead hat I never even considered the direction," said Legolas, and Gimli and Pippin agreed. "For where are we to go? And by what shall we steer?" Gandalf calmed down the three, and together with Merry and Aragorn explained that they shall take the lead on this journey. "We travelled these lands before, thus do not worry" he told them, and they relaxed. 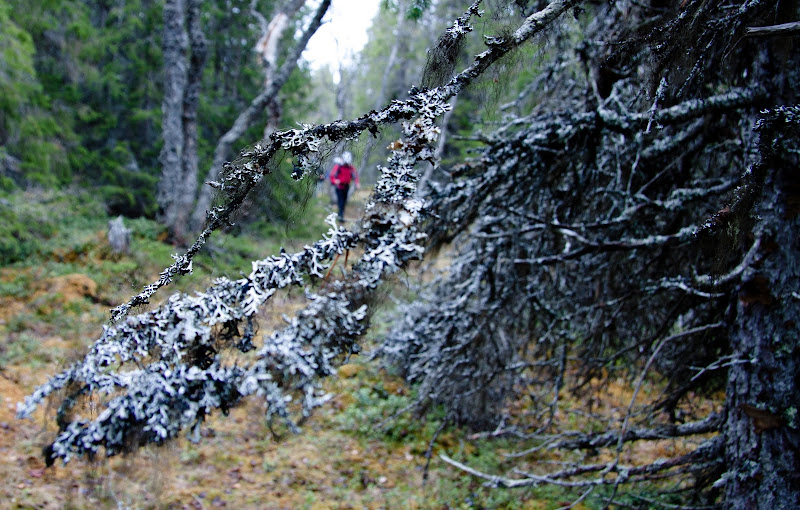 After walking for an hour, they approached the first ford which brought them away from the path. For Legolas this was the first time to ford a river of such width, and after watching Gandalf cross it without problems he and the rest of the group followed him. The fast flowing, cold river made their feet numb, and after a short stroll to warm up they sat down and had lunch - an important element for the group, to refuel and exchange thoughts. 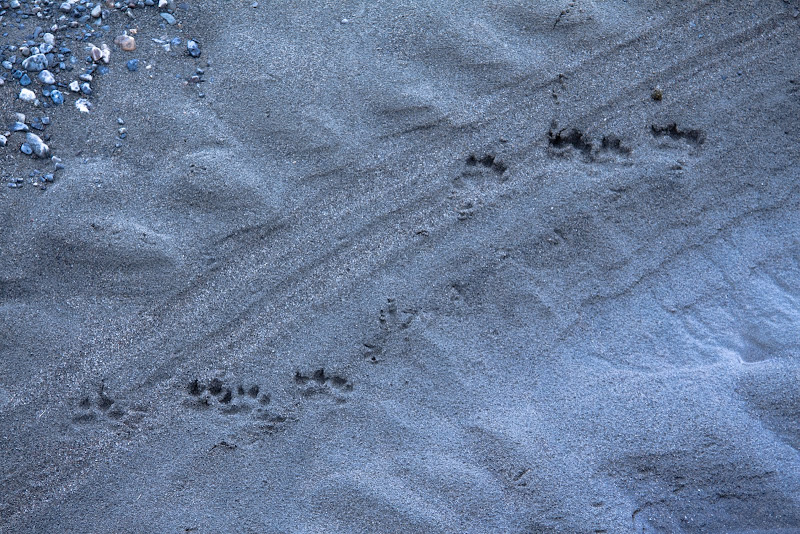 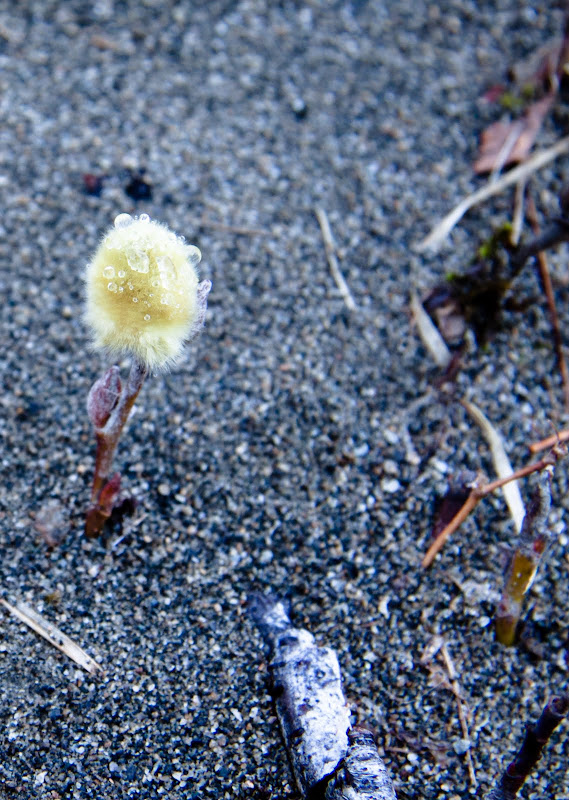 Strengthened the group continued, through smaller fords until they reached the shore of the mighty Vålån river. They stayed on the same side of the river and followed it up, passing majestic falls and fast rapids. They followed old game trails where there was a possibility to follow them, and kept the river to their right. Tea was had, and little breaks to regroup - some could not keep up with the long-legged Swedes, needing to take two steps where a Swede took one. 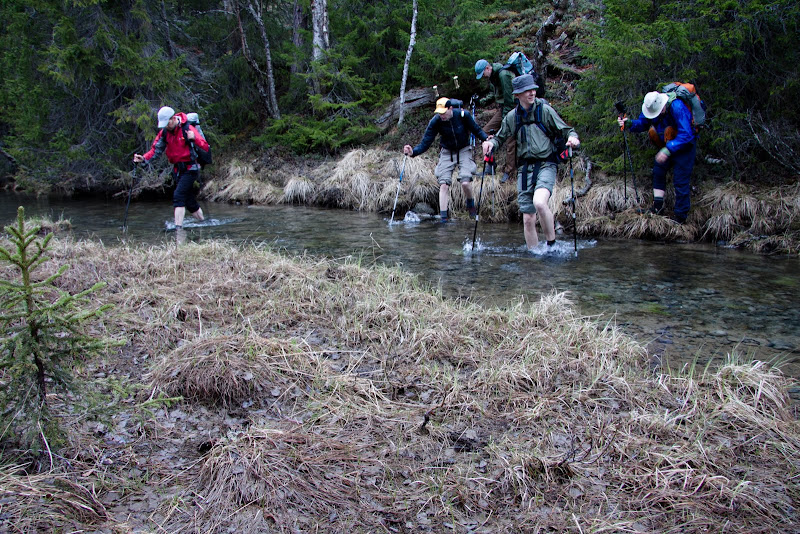 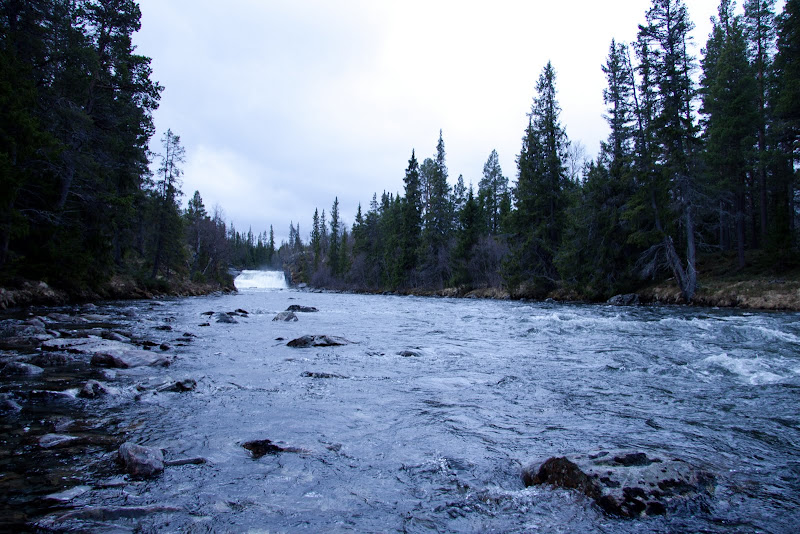 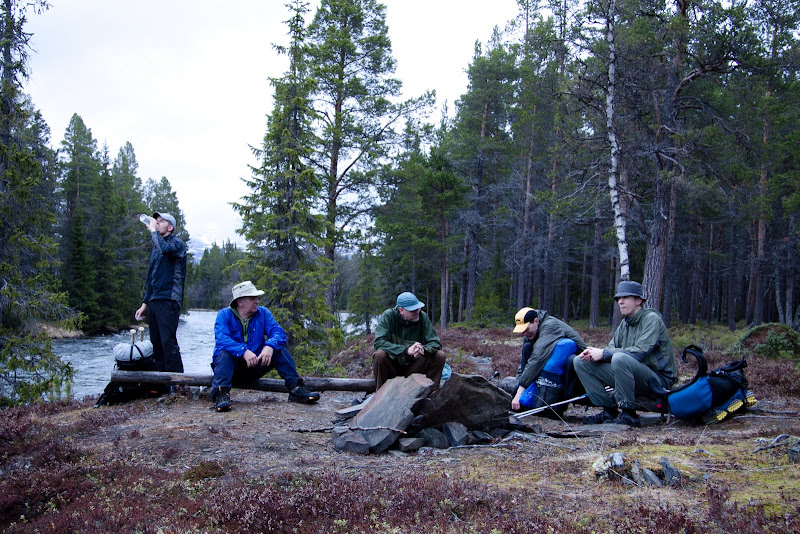 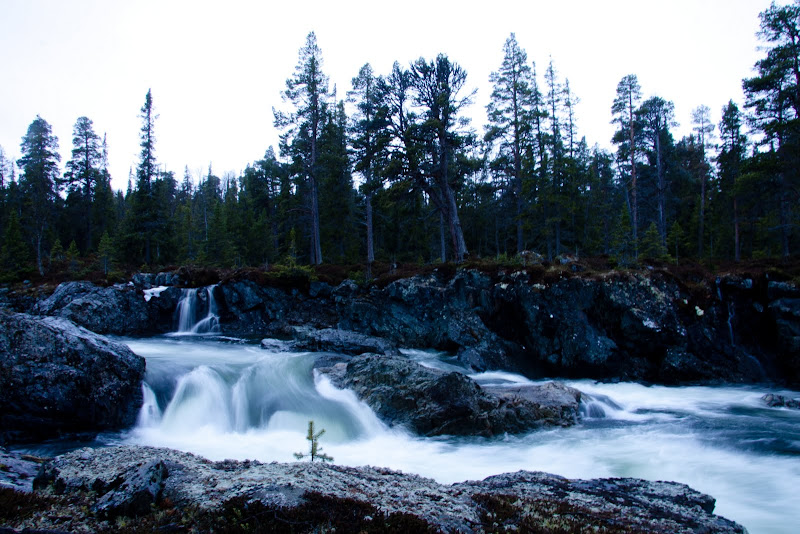 "Now let the song begin! let us sing together
Of sun, stars, moon and mist, rain and cloudy weather
Light on the budding leaf, dew on the bivy,
Wind on the open hills, bells on the heather,
Reeds by the shady pool, lilies on the water." 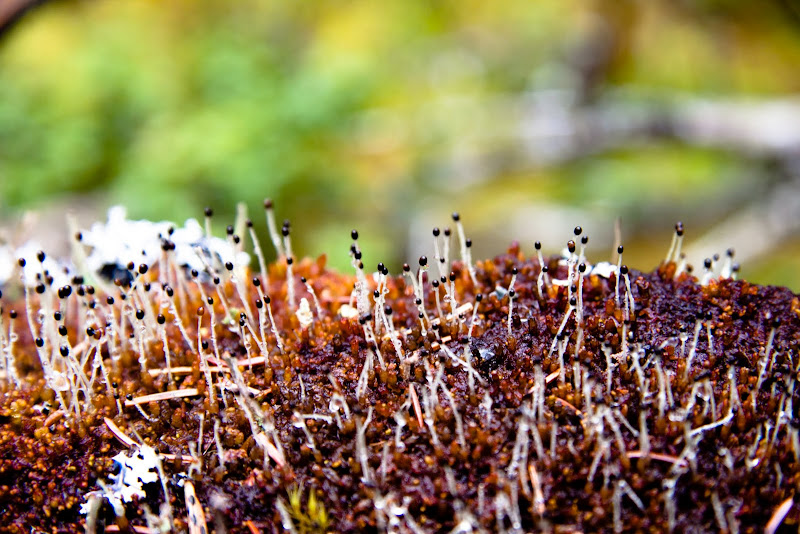 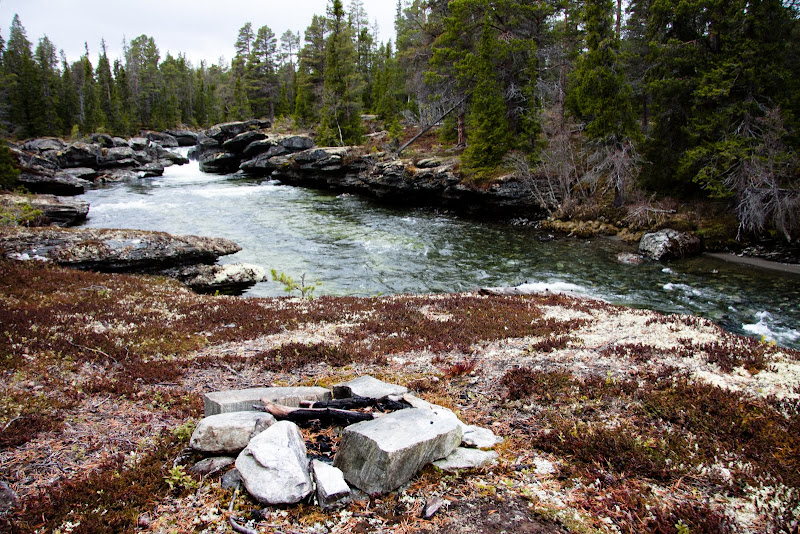 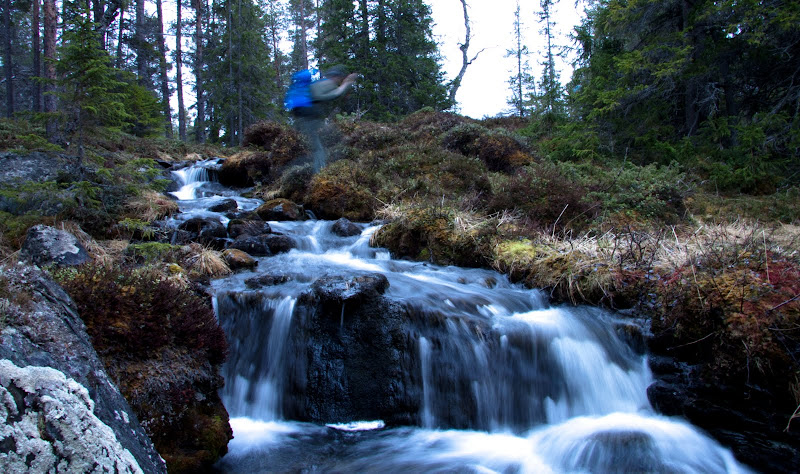 In The House Of Tom Bombadil

And with that the six lightpackers arrived at their first campsite, and stood still, looking for places to pitch their shelters. They were in a long swamp and boulder area along the mighty Vålån river. After searching for a while, each of our six heros found a comfortable place to sleep, and soon they gathered around the hearty fire which Legolas and Gandalf started. Meals were prepared and firewater made the round. Lively conversations were had till the fire nearly went out, and also the last ones retired to their shelters.

In the next morning Gandalf came knocking on the porches of the members of the Fellowship, he already had the fire going and was waiting with breakfast for the others. The Fellowship ate and after packing up continued their journey, looking back on the fire and trees which gave them warmth and comfort from the rain. The day was wet, from beneath and above, and the group continued upwards, towards the mountains, where snow still covered their paths and reindeers eyed them cautiously. 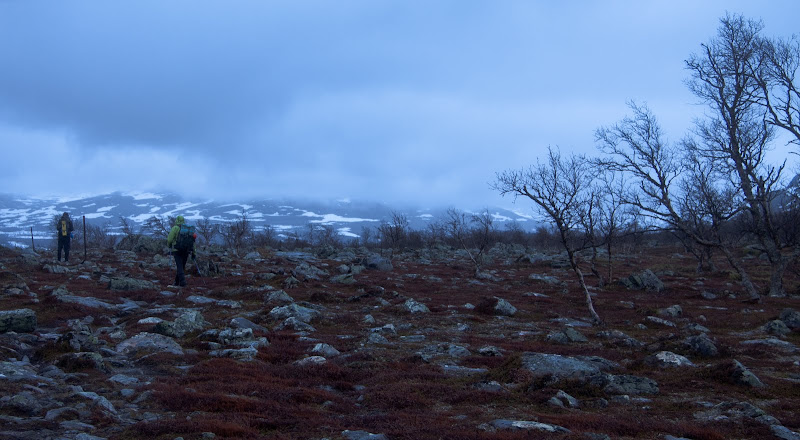 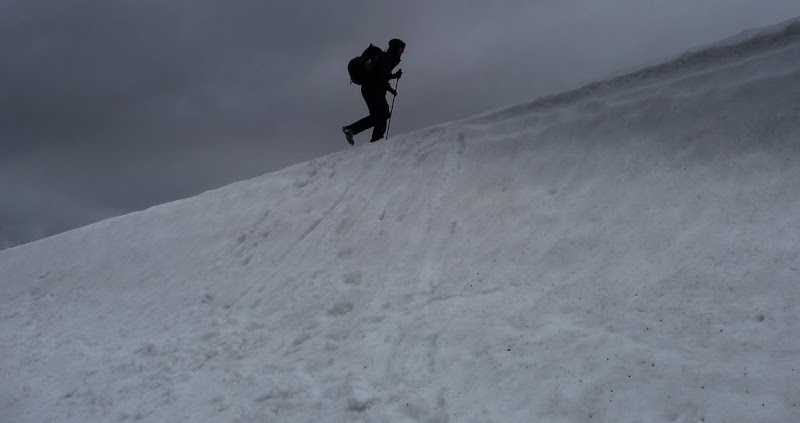 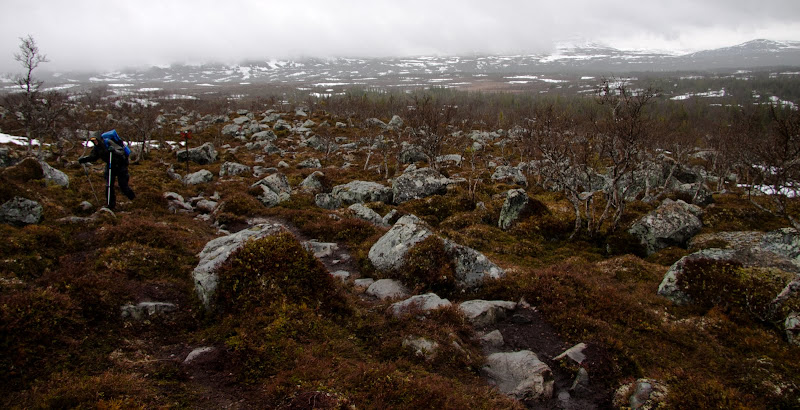 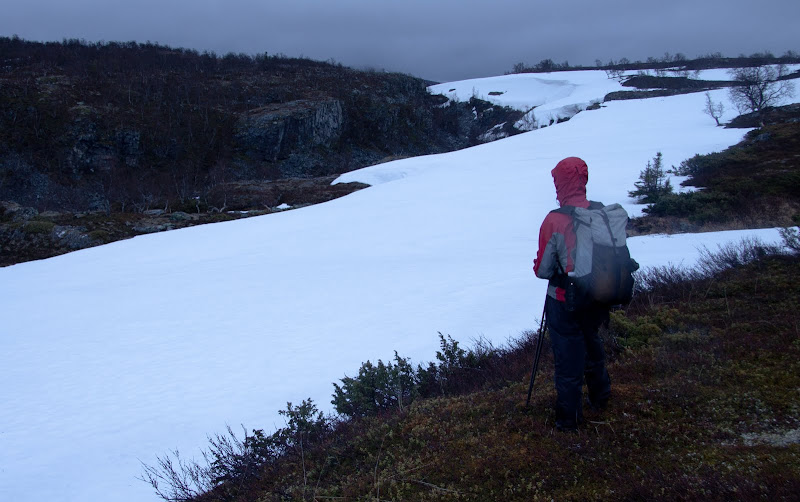 After a welcomed, sheltered break besides a warm oven the Fellowship continued its trek, even further up the fjell. A final ford of deep cold water later the group reached the desolate plateau. The barren land was unfriendly, the strong wind sweeping over it with no place to hide from it. Before long, the group descended to the valley, where a long forgotten King's hunting lodge was located, but the ruin was not welcoming and so they continued further down the valley, towards the protection the forest would give them. 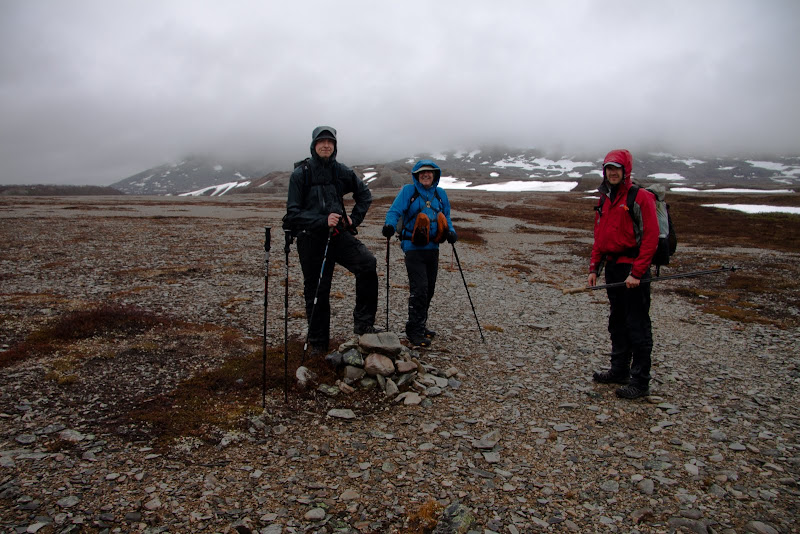 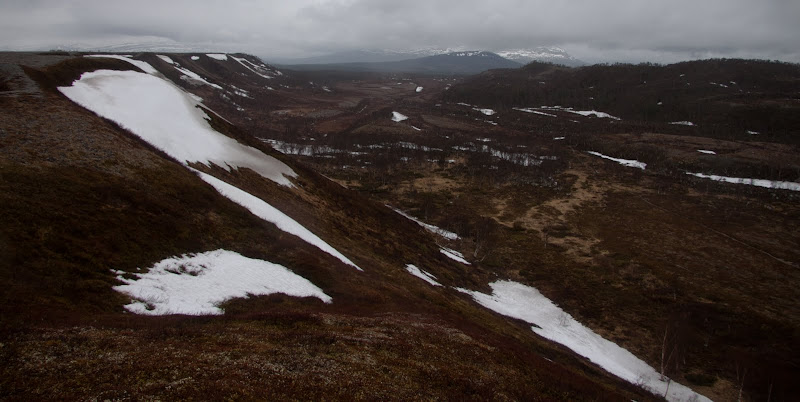 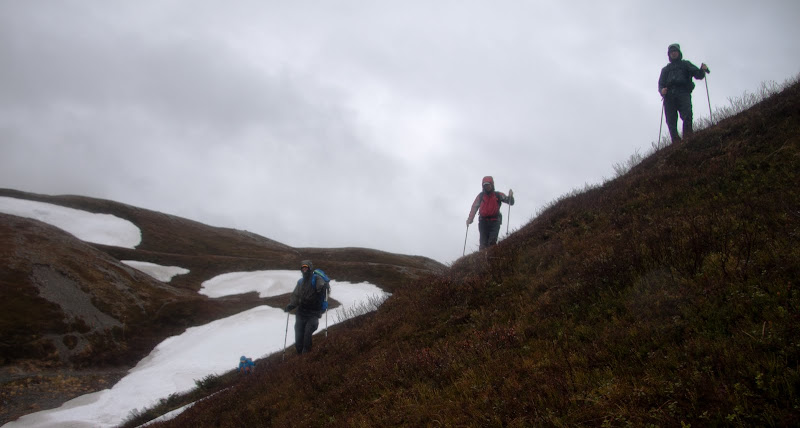 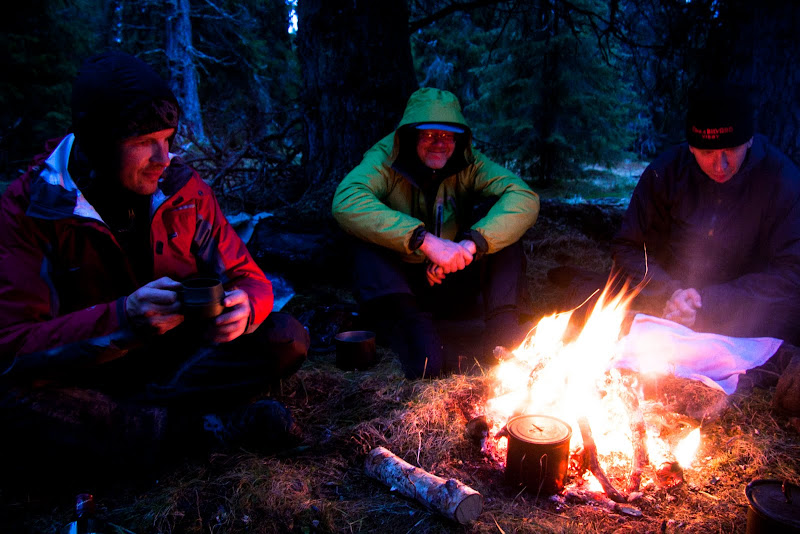 Aragorn and Legolas discussed till late in the night around the campfire, and only the hooting of owls - a sign that the day had changed - made them depart to their shelters. In the morning Gandalf again woke them up, waiting with a breakfast and fire for them. While there were no planned fordings this day, a flood had covered the trail in water and so the Fellowship again walked with wet feet. Their goal within their mental sight, the weather started to change. The clouds were blown apart, and the sun came for the first time out during their trek. 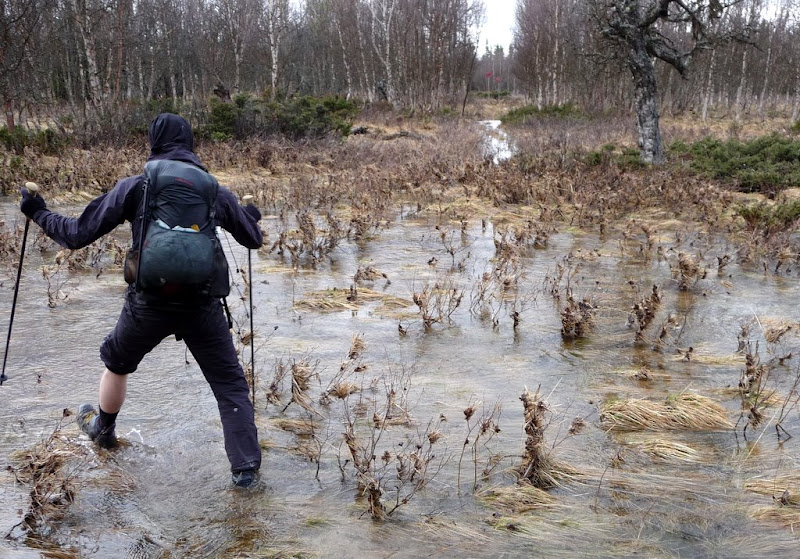 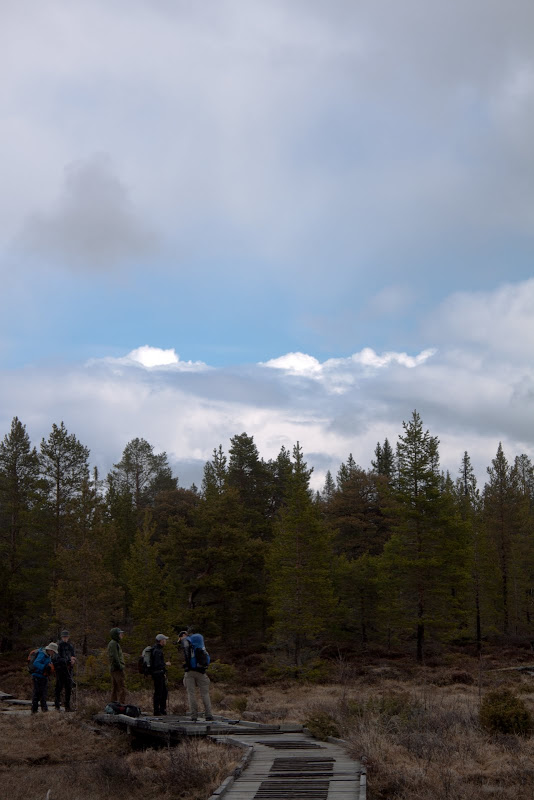 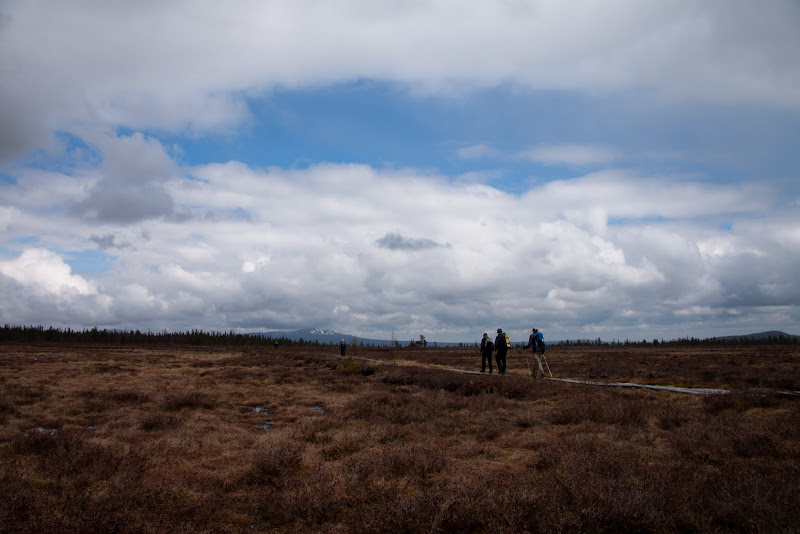 Their Spirits lifted, they forgot their hard task ahead - to bring the knowledge of lightpacking towards the north - and enjoyed the sun shining down on them. Under the blue sky our heros continued towards their goal, a small inn with a steam room and a good ale. Forgotten their worries of rain and greyness these last days, a Fellowship was born. 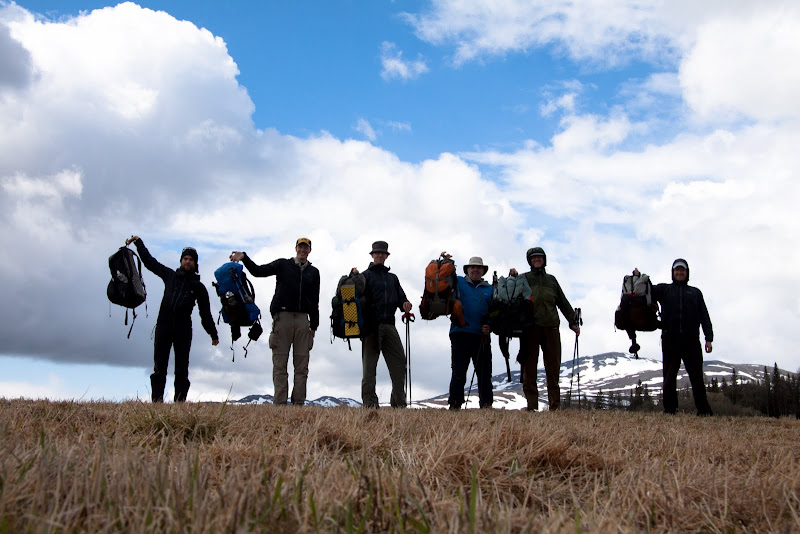 It was a busy week yet again. Besides all the "Back from Vålådalen" posts there is a flood of TGO reports. Lets go. 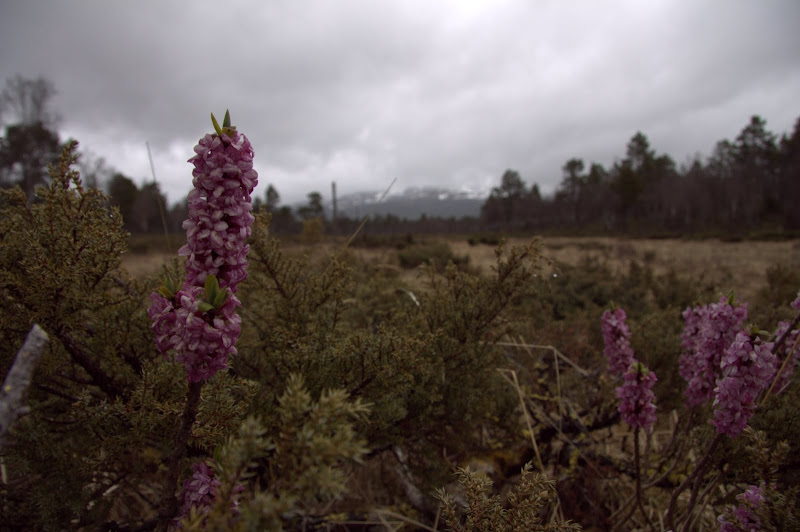 There was only one TGOC article I read thus far, and that was Andy Howell's excellent "A Younger Challenge: Not Only a More Vibrant Event But One With a Bright Future". Its a great piece and makes me want to send in an application for next years challenge.

Hana is fit again and was taken out on a trip up Ogawayama and Kokushidake. Makes me want a four legged companion for my trips.

Comet passed the 300 mile marker on his PCT hike, and asks himself what he was thinking.

Snakeball on the other hand is already a bit further ahead and is walking through the Mojave Desert and wonders if he needs to change his perception of a desert.

Fraser went on a bicycle trip in Glen Derry and if you follow Fraser already you know he shots cracking photos. He pushes the envelope in this report once more.

While Don Meredith did not get to go on a bike trip because of the weather, his packing list looked pretty awesome - Fraser could still learn a thing or two there ;)

Jonas went bouldering in the forests of Northern Germany. Nice green forests and blue skies - when it doesn't rain!

Richard went on a day trip on the North Antrim Causeway Coast and brought back stunning photos.

Roman Dial reports briefly of his week with Andrew Skurka and Mike Brown.

Die Beuteltiere went on a weekend trip from the Waldeifel to the Ahrtal (Ahr valley), and besides a Dyneema huckePACK there where plenty of encounters with the animals of the region and historical sights.

Colin Ibbotson is back from the Arizona trail and while he takes some time to get back into "real life" you can listen to his thoughts on the trail and check out the photos. 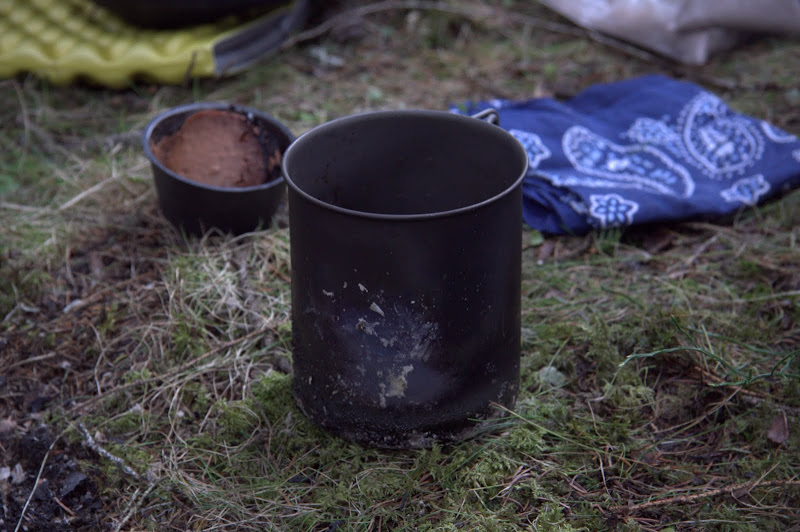 A groovy biotic muffin, made by Joe.

In the gear review section I really enjoyed Robin's "lessons learnt" post where he goes briefly through the various gear he took out on his latest trip.

If you, like me, carry a DSLR into the outdoors, and if you're not as lucky with the weather, you might need something to protect your expensive camera and lenses. Here I found an interesting solution which I am planning to try out in the future.

Phil has a look at the Brasher Neon shoes, which look like a steal for 25£.

Looking for a lightweight raft for white water action? Here's a first look at the Alpacka WitchCraft.

PCT has a look at some sweet merino garments from Chocolate Fish, namely the Taranaki T-Shirt, Fly-Front Boxers and Bunnet. Nice colours and made in the UK, I like that.

Four Dog Stove made some ace looking videos, check them all out here or click play on the video above.

I reckon you have heard about this tiny problem BP has, and therefore I do think you should boycott BP if you drive a car.

Finally, there is the Outdoor fair coming up in Germany soon-ish. I was asked by a few people if I'd come and would join them, but I decided that I rather not go. I hate huge amounts of people, and as I reckon that Roman and Benjamin will do a good job of covering the happening from an UL perspective and I am not up for a race of "Who posts what first" I'll rather relax in Finland.

We arrived save and sound back home. It was an epic trip, and the reports will follow during the following weeks - keep your eyes on the blogs of Roger, Gustav, Jörgen & Martin and Joe. Until my trip report of "The UL Fellowship" will come, I leave you with this impression of the Fellowship crossing into the lands of Morder, ähm, the Swedish Fjell. 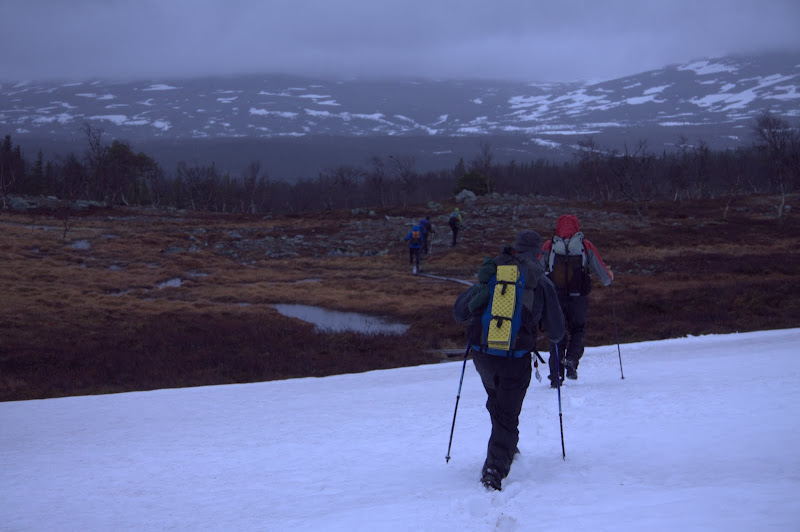