Last weekend the LT II had its first trail test, and it performed very well. The fact that we were at a lean-to also meant plenty of pretty much dry wood, from where it was easy to find small, dry pieces. That was in my test today not really the case, most of the wood was covered in a bit of ice or snow and it was difficult to secure a sufficient amount of dry wood. Anyhow, have a look and see how it went.

Weight for the Bushcooker LT II including the ground plate was 109 g, which is very lightweight. Together with the SnowPeak 900 cup and also the alcohol plate the weight was 278 g, considering that you have now the added options of burning alcohol and Esbit with it its an excellent trail weight.

As you saw in the video, burning wood in the winter to secure water for drinking and making food ain't a very easy task. You need to be able to secure sufficient dry wood and have good kindling in addition to your firestarter. I'm sure it is possible to do this, but it is more difficult than just putting your gas stove on while you're lying in your sleeping bag in your tent. I'll try Esbit and Alcohol for melting water and boiling it, as well as giving the Inferno and the BushBuddy Ultra a run in the same conditions, to see if they fare better. I'm sure they won't reach the convenience of a gas or multifuel stove, but therefore you do not need to carry that fuel with you.

So my temporary conclusion would be: If you plan to use the Bushcooker LT II in the winter, know how to make fire and secure plenty of wood, and carry some alcohol or Esbit as a back-up. I like the low weight and packability of the LT II, and think that in the summer the LT II will be a great companion for my trips.
Yes, time's up and with the help of Random.org I was able to figure out to whom the Merino Buffs will go. Drum roll... 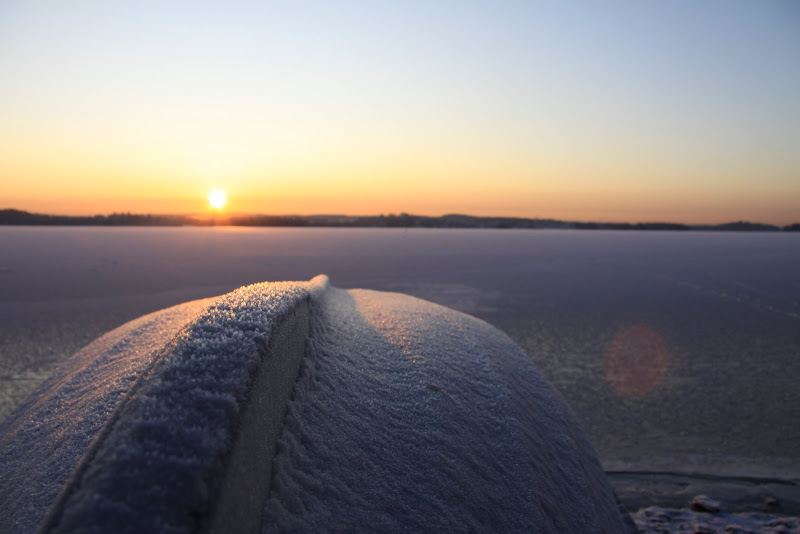 The lucky three: Please contact me via Email - hendrik dot morkel at gmail dot com - and send me your address + preferred colour (first and second choice), and I'll send them out in the beginning of next week.

Thanks again to Buff Finland for making this possible. The other 35 commentors, if you'd like to get a Merino Buff, they're still in stock at Partioaitta and Retkiaitta so you could treat yourself to a nice christmas present!

Saturday morning Xavier picked me up and we drove half an hour out of Tampere towards the start of the trail. We parked the car on a forest road, put some more clothes on and started walking. 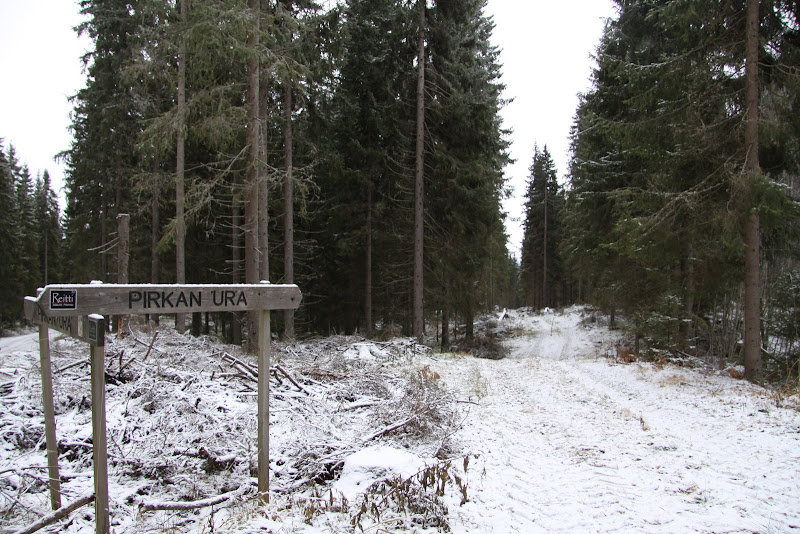 Weather forecast was -4°C and cloudy to sunny, I'd wished for more minus degrees but it stayed warm. We got off-trail a few times, and were bushwacking through the forest, just to see a few meters away the path. Well, the path it is, no need to make it more difficult. 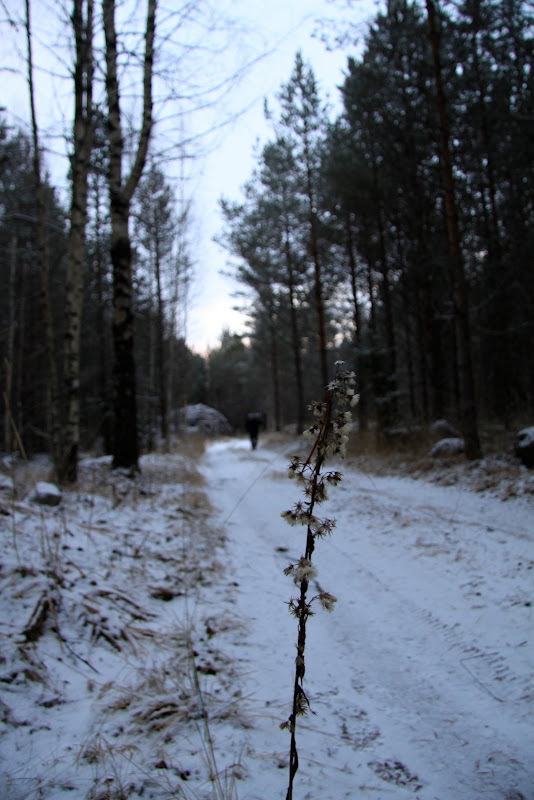 Xavier on the trail (in the background, he's not a flower). 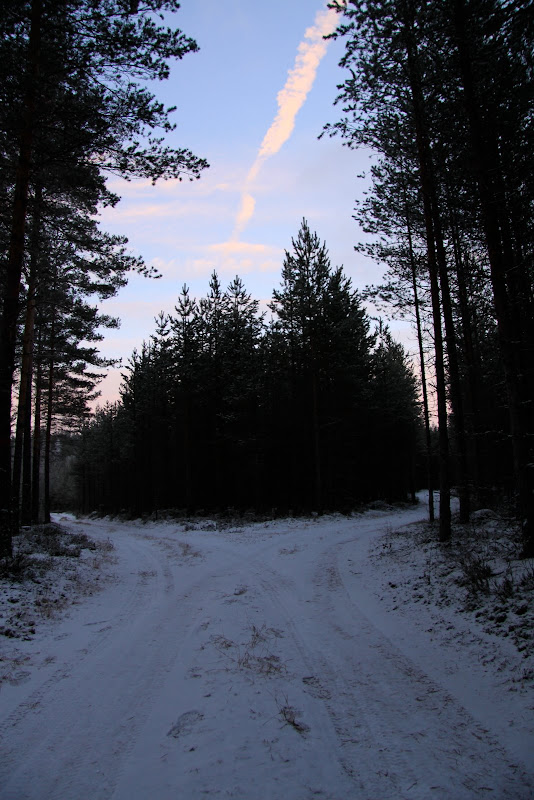 Which way to take? 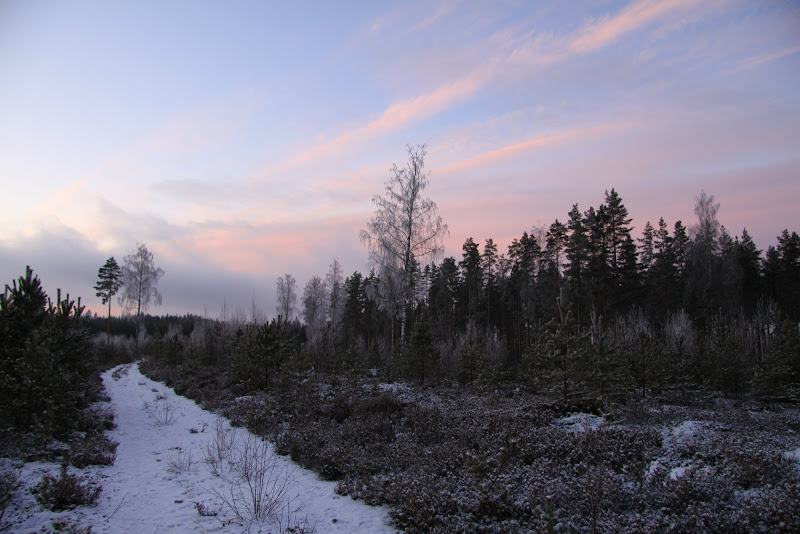 We walked on-trail and off-trail, crossed forest roads, walked on them, saw many tracks of Elk, mice and other critters in the snow, and enjoyed to be able to talk about UL backpacking. Only two kilometers from our intended goal, a lean-to shelter, it got dark, we didn't find the trail markings, so we decided to just go straight through the forest. 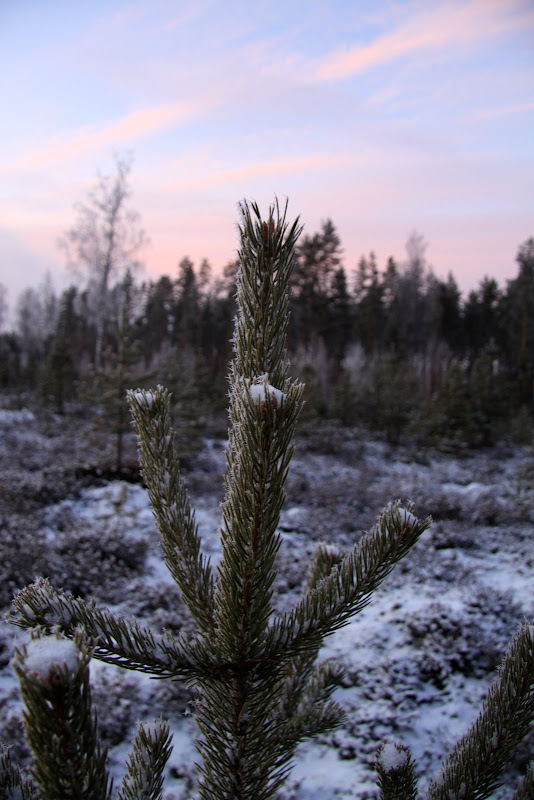 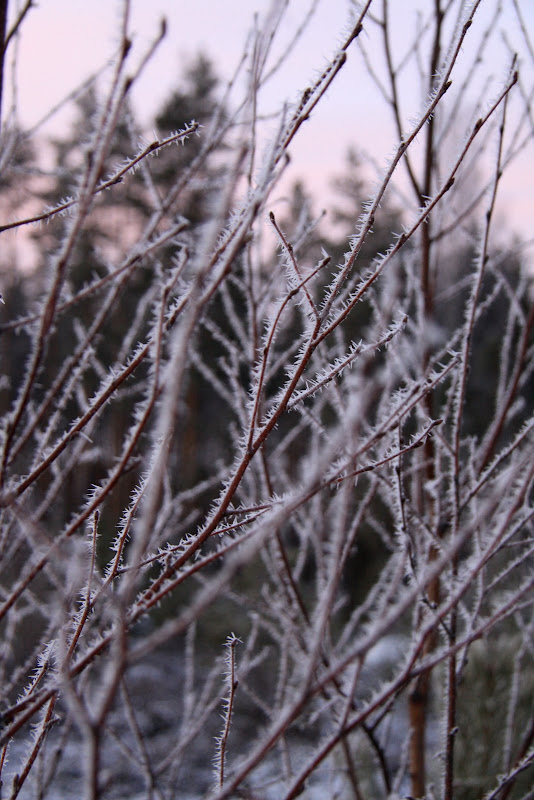 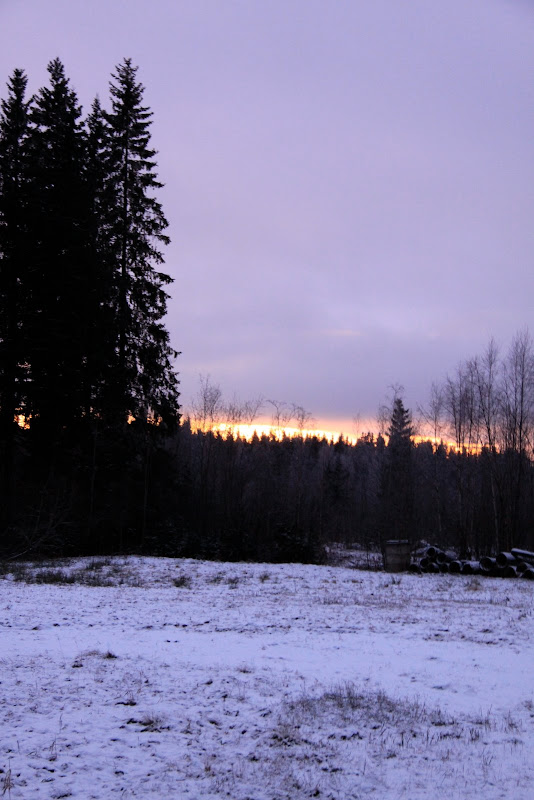 The sun sets, and we continue our adventure in the dark.

After consulting the map and GPS for a while, we managed to get out of the forest, onto a forest road, with a sign right in front of us. We followed it, and after a while we did reach the lean-to shelter. Xavier decided its his turn to start the fire, and after a short while he had it going. 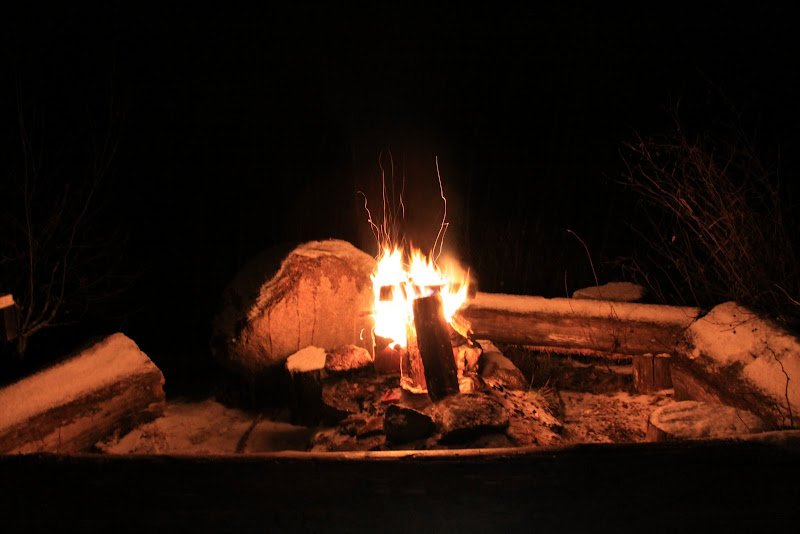 Home is where the fire burns. 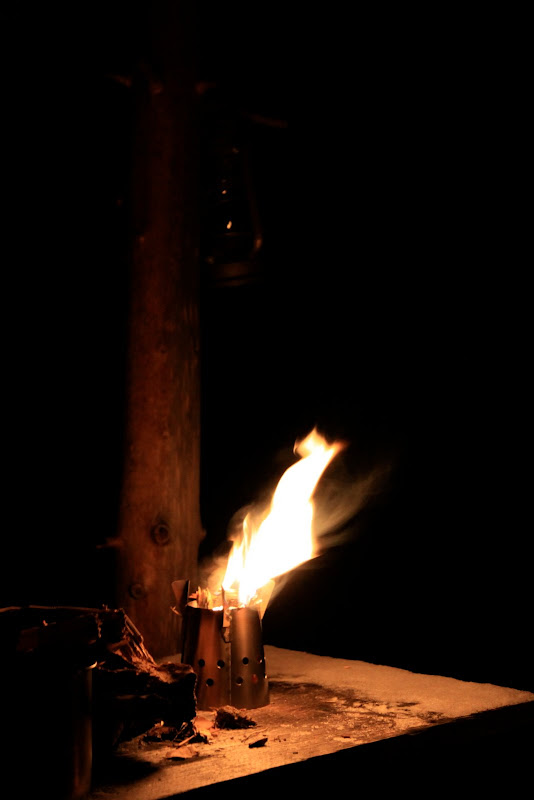 I got a fire in the Bushcooker LT II going and started to cook me some dinner - I was starving. Xavier followed suit and lighted up his Bushcooker, and in no time we were well fed. Time to take out the PlatyPreserve and enjoy a cup or three of redwine by the fire side. In the best of moods, I took out the camera and the GorillaPod and started to take some photos. 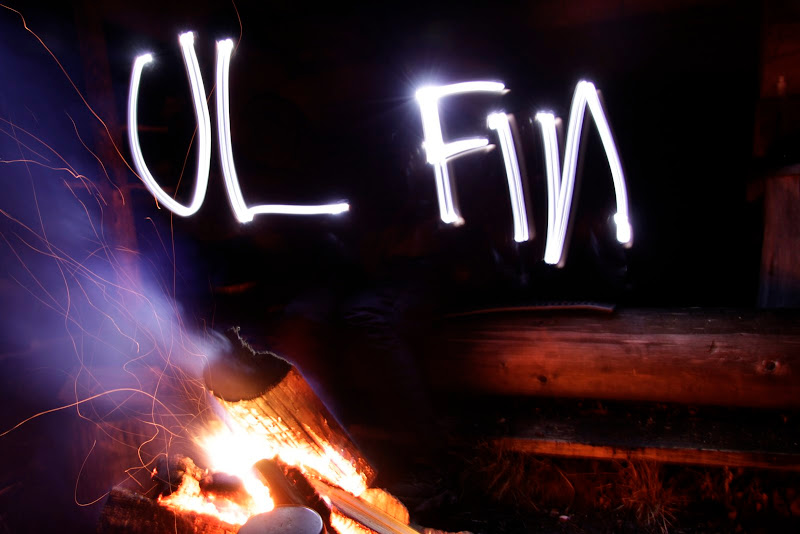 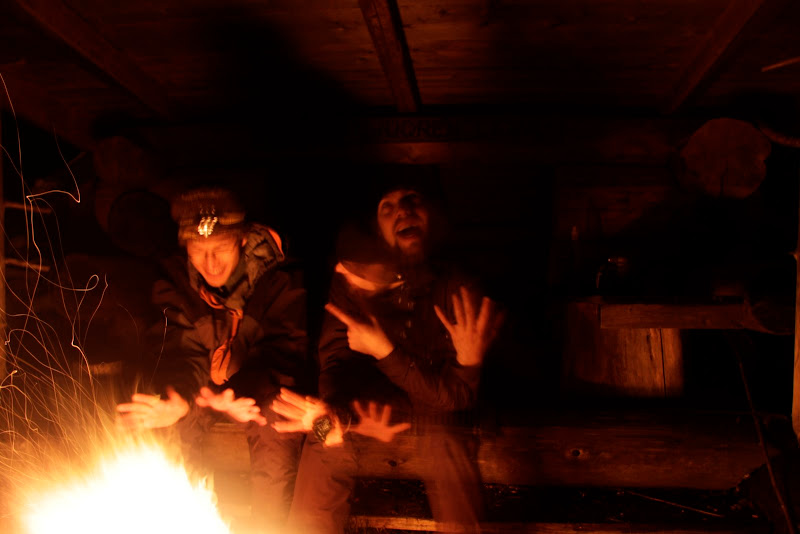 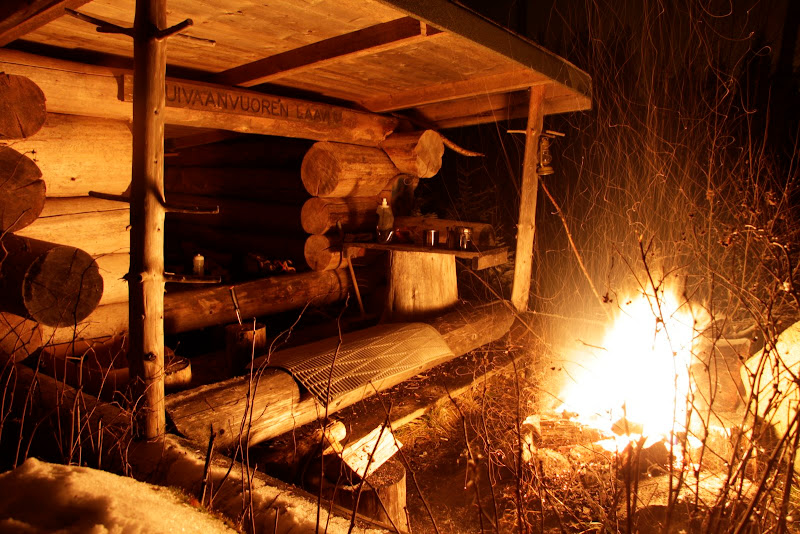 Our home for the night. Yes, it was splendid!

After a cup of Minttu Kakao I lay down on my Multimat Adventure and a Multimat Summit Compact 38 and problems with being cold on my back were a thing of the past. On top the GoLite Ultra 20°, and wearing an Integral Designs PLQ Jacket and Pants plus a Cyclone Buff and Merino Buff equals a toasty warmness during the night - in which I dreamed of global warming and the lack of winters. Hopefully that won't happen =) 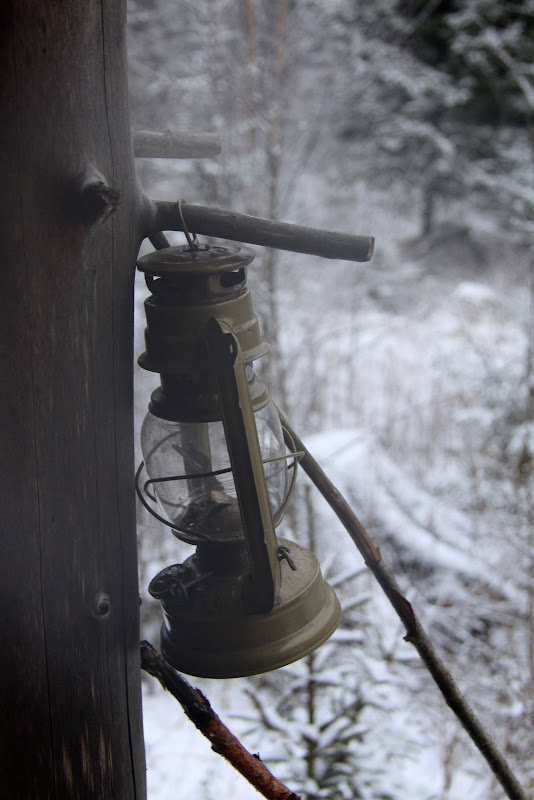 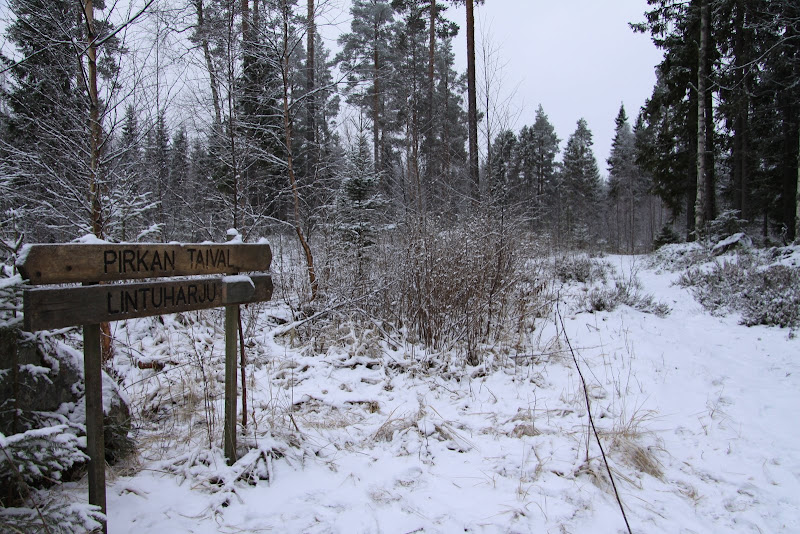 The way we came last night.

After a delicious breakfast (Fruity Kakao Müsli for me, Weetabiiiiiiiix for Xavier =) we packed up and decided to continue a bit further north before taking a right and walking back to the car. The sound of fresh snow was reaching our ears as we started to walk - yeah, it snowed last evening. A moment later we reached a forest road and were met by two couples, out on a Sunday morning stroll. 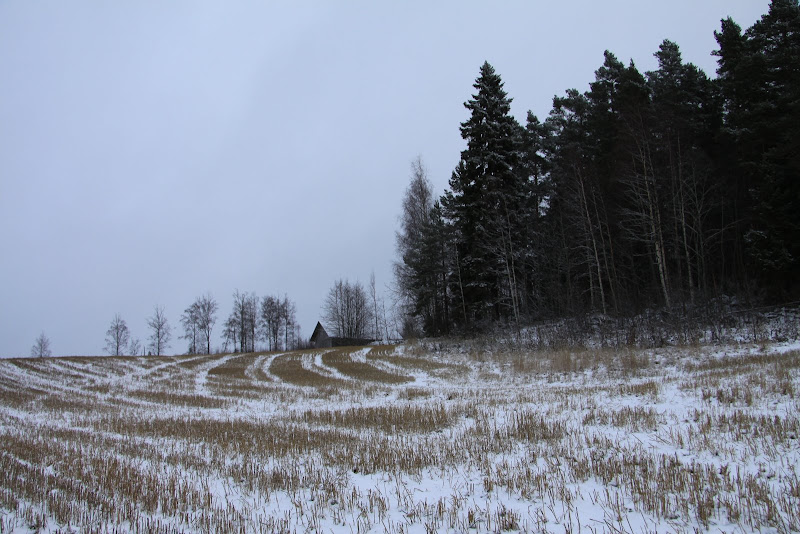 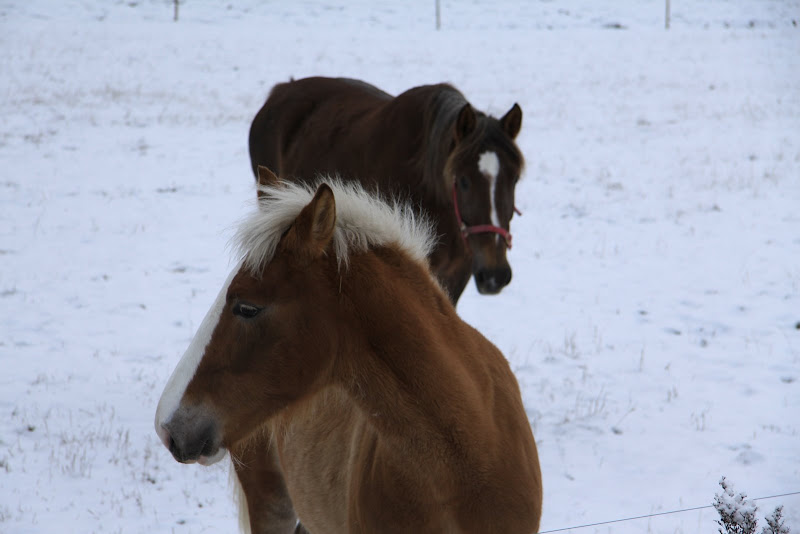 Horses. We weren't able to ride them back to the car, they wouldn't cooperate.

A few kilometers on the road, which was "busy" with Sunday morning traffic, we took a turn and headed back to the trail we walked the day before. We decided to have lunch and try our fire making skills in the middle of the forest, and while we both got a fire going the lack of enough dry wood had me stop soon and demanding to continue to the car (I knew there would be hot coffee and some breads be waiting at home for us)! A woodpecker, who sat on the tree next to us, didn't mind us being there lighting up the forest, and continued his knocking concert. 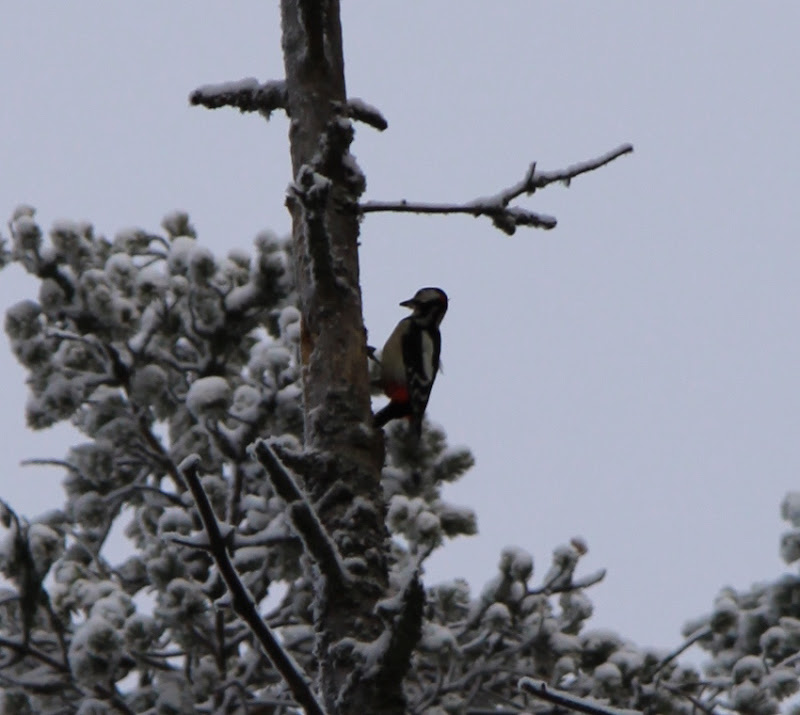 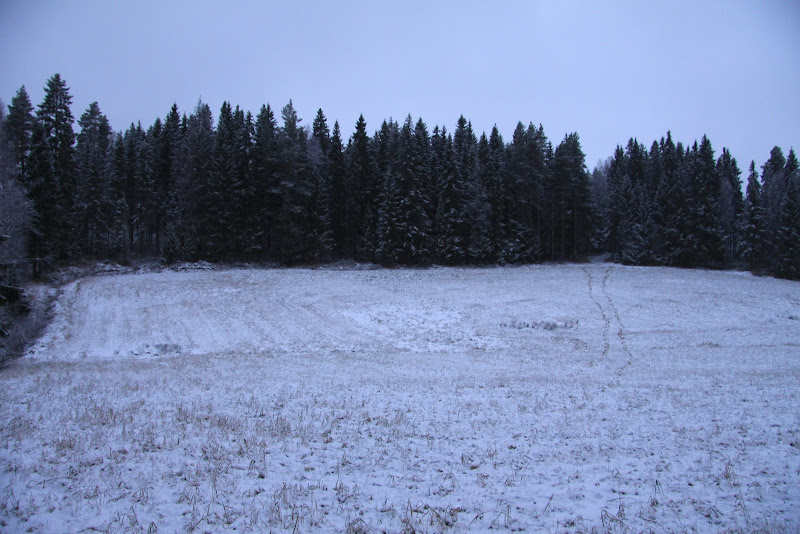 An hour after our attempt to cook in the forest we strolled over a field towards the car, and thirty minutes later we were enjoying the coffee and breads.

A good 24+ hours out, though now I want more. More snow, more minus degrees, and more of that splendid winter sunshine on my face. Sitting around fires in the evenings, enjoying life like its supposed to be.
← Older Blog Archives Newer →