Late on Friday afternoon I walked to the bus station, and after a longer than usual bus ride I started walking in Kuru at 16.45 o'clock. The first 15 km were familiar terrain as I walked it not so long ago, and I made good speed, arriving at Isokalliojärvi already two and half hours later. 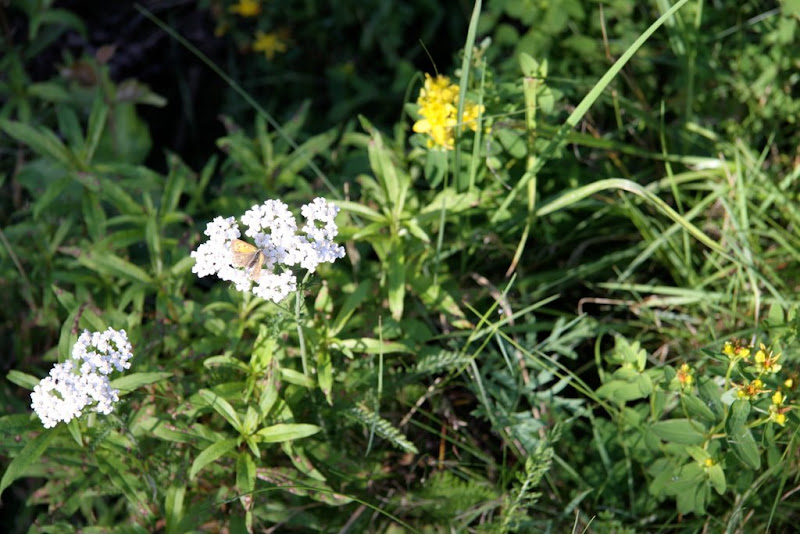 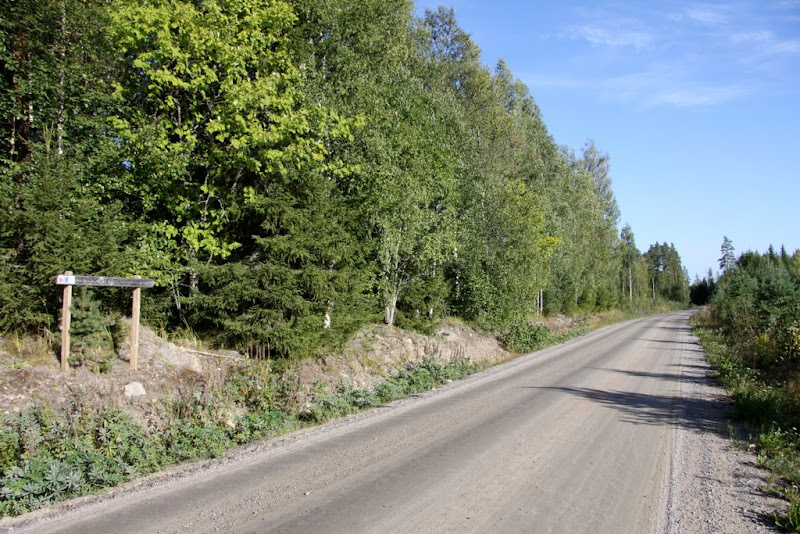 The trail uses forest roads like this one for some parts of the trail... 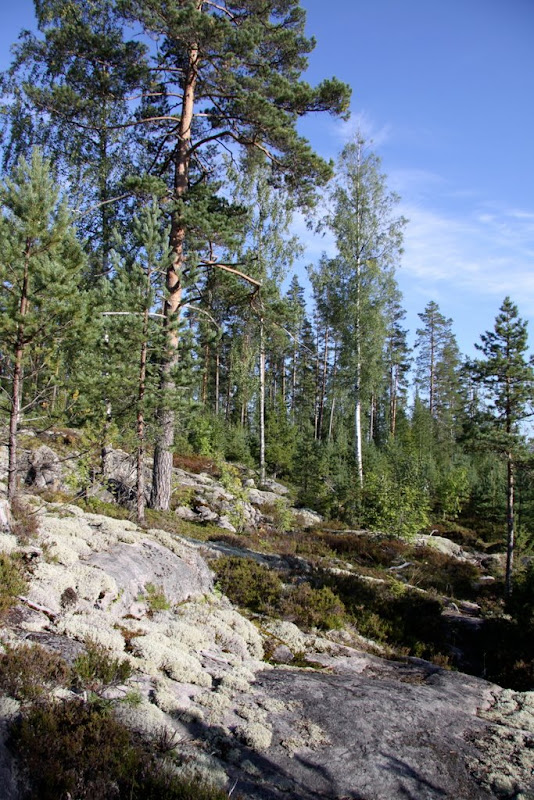 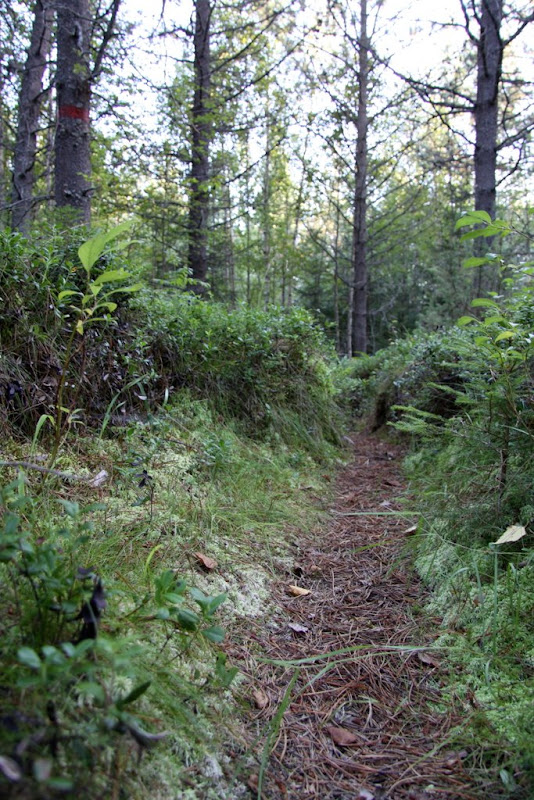 ... another part of the path, this time through shrubs and moss. 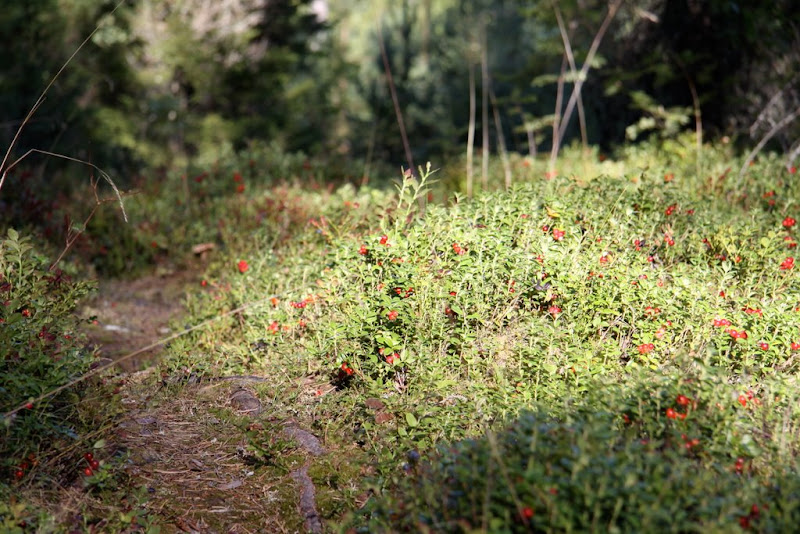 Red whortleberry next to the path. Plenty of them, and delicious. 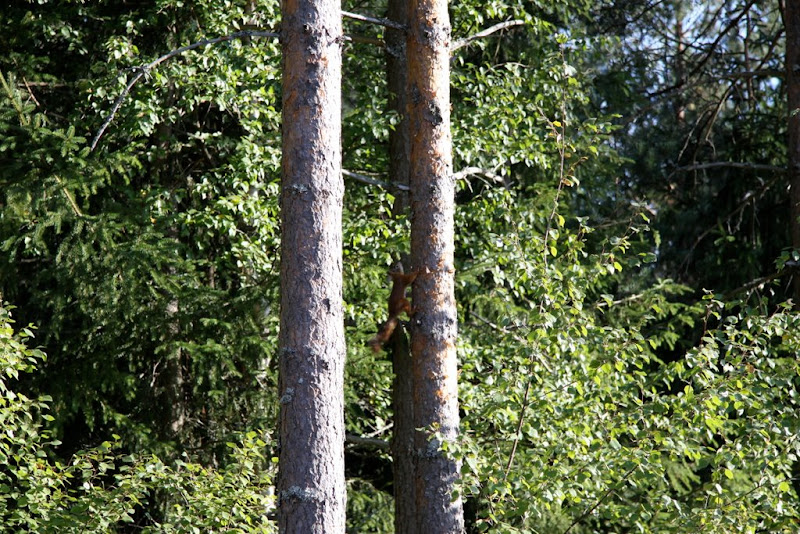 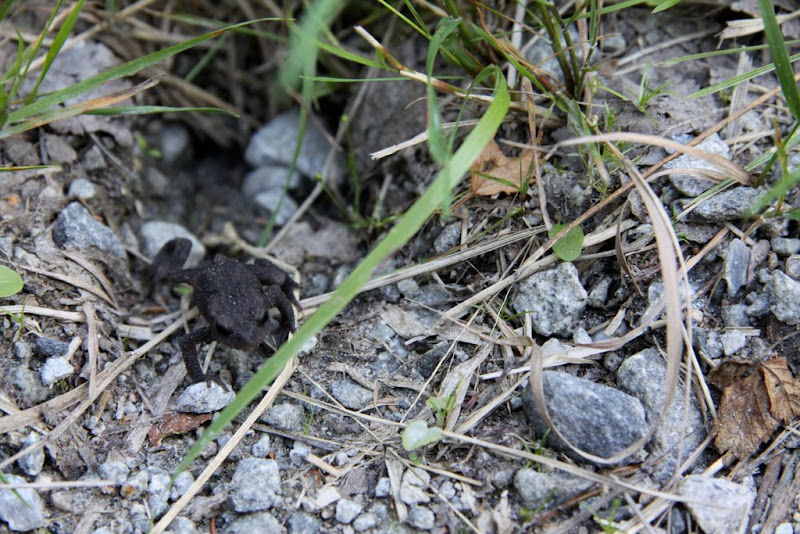 From Isokalliojärvi to my campsite it were still 9 km, and the sun slowly was going down. I enjoyed the well marked path, and the smell of the forest in the evening. I passed by an occasional house in the middle of the forest, previously a farm now used as a summer cottage. Dogs were announcing my passing by, and curious faces looked out of the windows, wondering what a lonely wanderer is doing at this time still on the path. 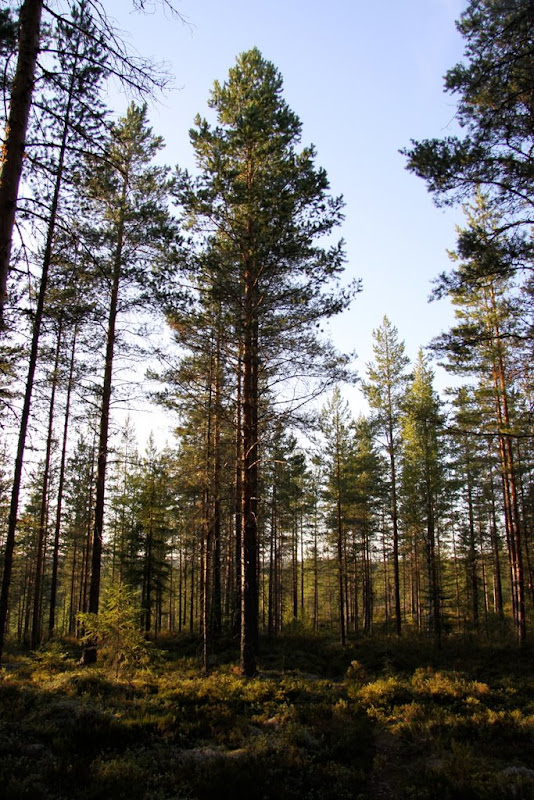 I arrived about two hours later at my campsite at Heinälahti, and looked for a good spot to put the Scarp 1 up. A couple which was sitting down at the water, watching the last bit of light from the sun behind the horizon, observed me curiously as I put up the Scarp 1 and started to cook with the BushBuddy. While waiting for the water to boil, I inflated the NeoAir and rolled out the sleeping bag. The pasta was simmering, and after a quick wash and putting on fresh clothes for the night I devoured my dinner. A look at the night sky was what rewards one for a trip into the wild: High trees aiming for the stars, which were plentiful. A beautiful sight to behold. I walked to the Scarp 1 and slipped into my sleeping bag, hoping that it will keep me warm enough this night. 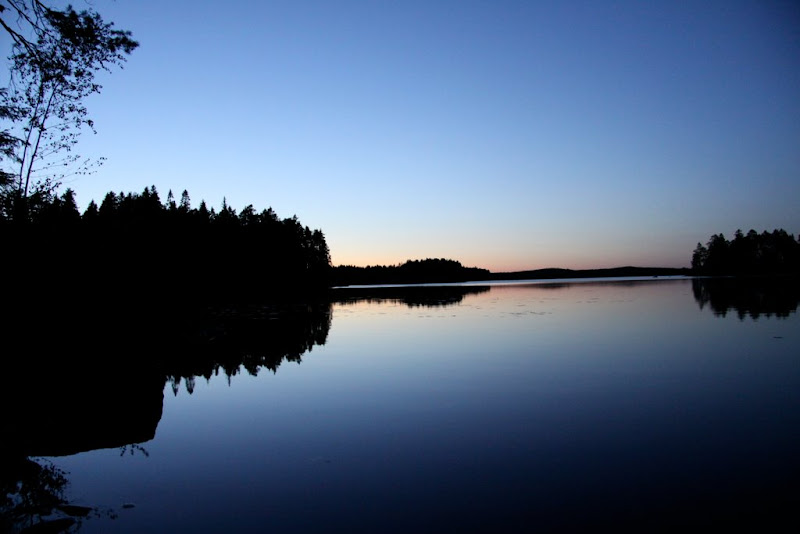 It didn't. At 4.50 o'clock I woke up from the cold. I opened the inner and the fly to take a peek outside. Dawn. Remembering that cjw from hiking and climbing in Japan takes some of his most stunning photos at this time, I decided to put on the pants and grab the camera, and see what I can do. 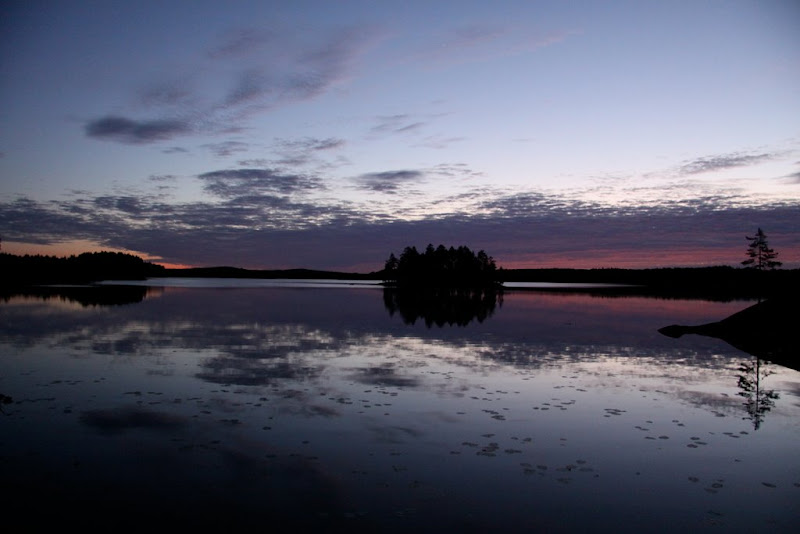 I took a few photos, and decided to go back to sleep. At 7.30 o'clock it was light inside my tent, and I decided to get up. Gear out of the Scarp 1, deflating the NeoAir and packing all together. Brushing my teeth while boiling water for my morning coffee. Enjoying the view. The fresh air. 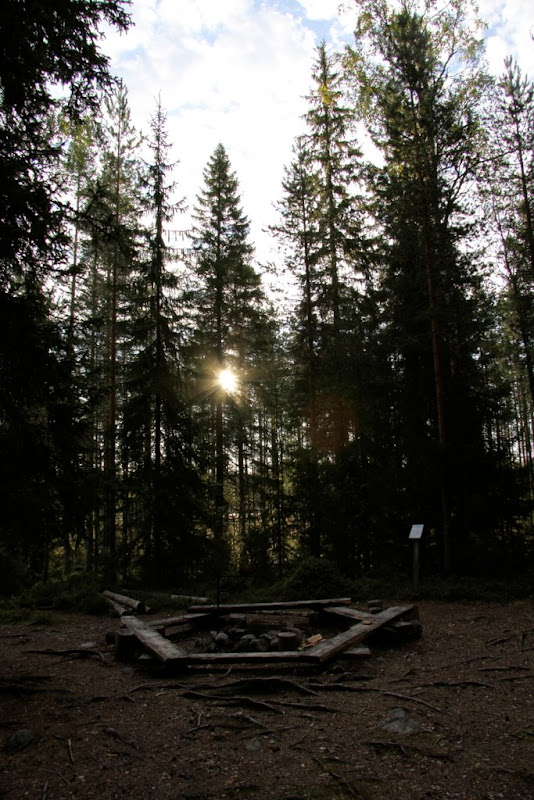 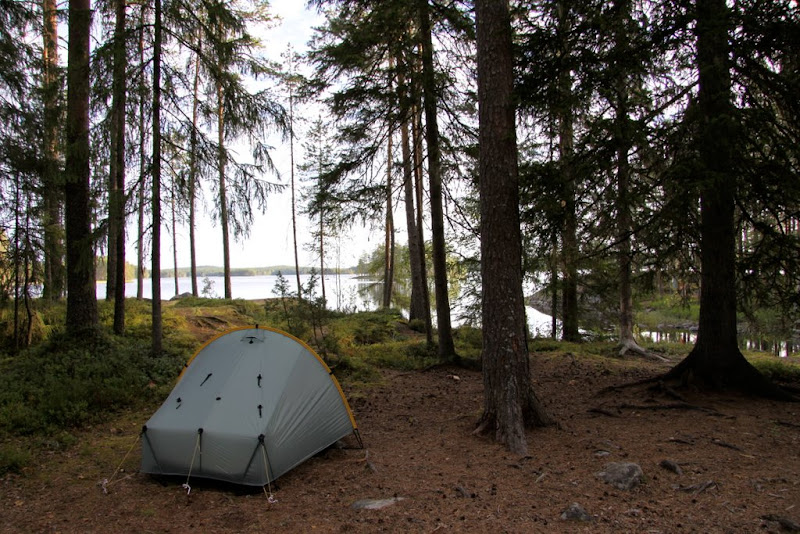 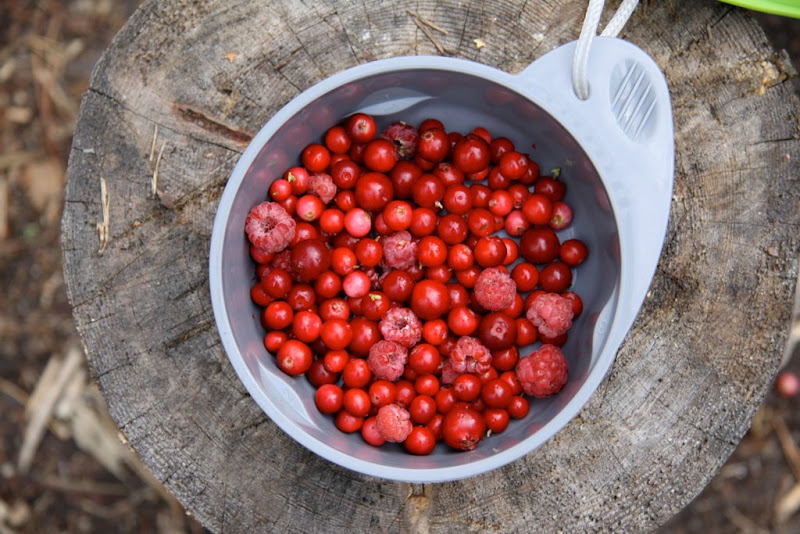 I tried to be fast, but still it took me nearly two hours to pack up and start walking. My neighbours still were sleeping by the time I left. I had the path to myself, and soon passed by Haukanhieta campsite, where people were slumbering in their huge FjällRäven and Halti tents. As I walked by Iso Ruokejärvi campsite, people were already up and making breakfast. A friendly "Terve!" as a greeting and I walked on.

I had a Mammut Geocache with me to hide at the Helvetinkolu (Hell's gorge), so I climbed it down with backpack and all. At the day trip hut grandparents were grilling sausages for the grandchildren, and although I was hungry I decided to continue walking for a while. It was 12.30 o'clock as I reached Luomajärvi campsite, the place I wanted to camp that night. But can I sit still and do nothing till dusk? No. The decision to walk to Ruovesi was made. 14 km, three hours time to catch the last bus. No lunch.

Utterly exhausted after jogging the last kilometer I reached the bus just in time. The chanterelle mushrooms I collected on the way were made into a delicious sauce by my girlfriend, and a pleasant Saturday evening and Sunday was had. Thoughts on gear I will post during the week, but in short, everything performed excellent - the sleeping bag will be replaced this week, allowing me to sleep longer on future trips. 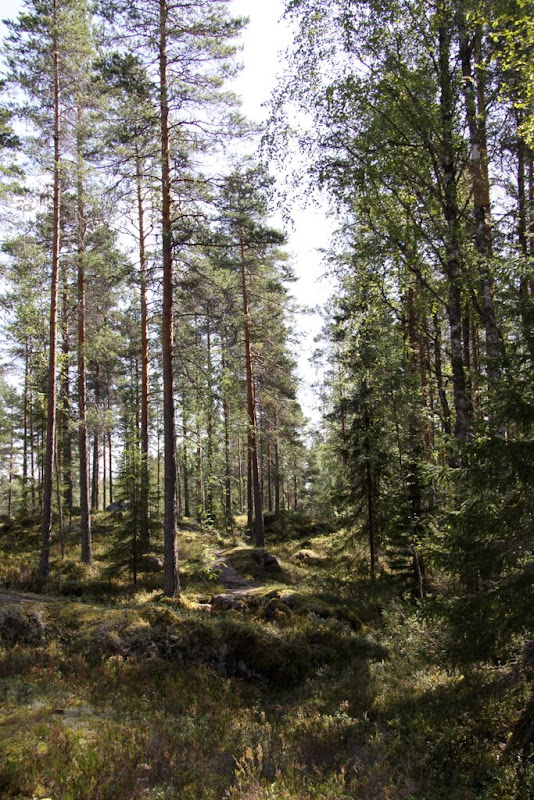