So obviously I had a lot of gear with me on the last tour, and a detailed review about everything would be nice but its not possible due to time constraints. So, inspired by PTC's "Kit that broke, kit that didnae, and other stuff before I forget" series of posts and a post by Markus on the trekking-ultraleicht.de Forum I decided that a post in which everything in the pack and worn gets a sentence or two written about would be in order. 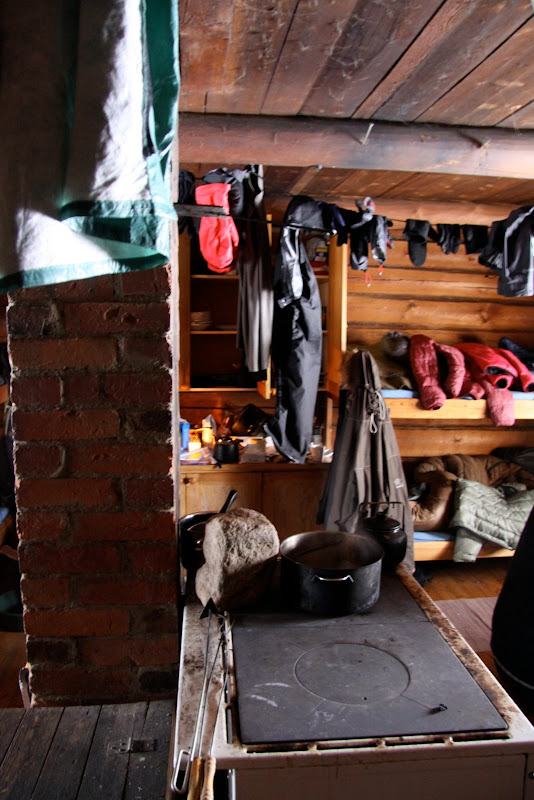 Various gear drying out at the cottage.

Spork: Not good if you eat out of bags. Happily Q had a 2nd Sea to Summit long handled spoon with him, which he gave me. Very useful and light at 13 g. Sea to Summit = Keeper, Spork = retired if I eat bag food.

Ti-Tri + Inferno: Didn't use it once on the whole trip, as I melted snow on the fire in my Tibetian Titanium 1100 pot. There was just no need for it, and I would leave it at home if I know I will be going to campsites. The pot was perfect, good size for melting snow.

Platypus: Two 1l bottles and the PlatyPreserve for the "Pepi". I borrowed a cozy which held the tea warm for a couple of hours, and if the water froze some massaging of the Platy always gave some water free.

Real Turmat, Travellunch: Both high quality food. Real Turmat slightly better, but at 8€ a meal I'm not sure if they will be the standard. Travellunch tasted good, and has a wide variety of meals for around 6€. If I have the extra cash I go for them, but Ramen and selfmade food taste as good, if not better.

Puukko & Kuksa: Both Keepers. Puukko so handy if you need to cut small pieces of wood to start a fire after your quilt collapsed, wouldn't miss it for anything. Kuksa isolates excellent and is easy to clean.

GoLite Ultra 20°: Fine till -10°C without a VBL, over that and it collapsed. My mistake, not going to take it if that kind of low temps could surprise me. Still top notch for the summer.

Laufbursche shelter: Slept only one night under it, but it was great. Easy set up, heaps of space, well-thought-out design. Might need to get a own one.

Petzl Tikka Plus: Gets retired. For winter you need a serious lamp, and the Tikka Plus ain't it. Some test lamps from Fenix and Princeton Tec coming in, expect a post in the coming weeks.

Julbo Dolgan sunglasses: The Anti Fog only worked half of the time, but otherwise I was glad to have them on those bright and sunny days. 33 g well worth to carry, but need to test them more.

Cyclone Buff & Merino Buff: Perfect for wearing during the day, kept me warm and dry. Wearing the Cyclone around my neck and up over the nose, and the Merino on top. Keeper.

Rab Microlite Vest and Klättermusen Loke: Great duo for wearing at camp and sleeping. No problems with being close to the fire either, the Loke can withstand some sparks without getting holes. Keeper.

Rab Momentum Jacket and Drillium Pants: Both great for when its windy and snowy, though I was able to get the eVent to the limit and had a bit of moisture build up, but when snowshoeing at -15°C that can happen. Keeper.

You already know that I liked the GoLite Pinnacle and the Woolpower gear, and expect a separate review of the Integral Designs PLQ jacket and pants. I will also give my thoughts on the Suntrica charger in the next few weeks. That's pretty much it what I had with me, most of it Keepers as you see, with some stuff needing more trail time.

So what about the stuff I didn't had with me? Well, a pair of VBL socks would have been a welcome piece of gear to have, because they keep your feet warm and minimize the danger of frostbite. An Cyclone buff for the neck and face also would have been useful, and probably more multiuse than a balaclava?

That was it. Questions, comments, observations, recommendations?