Not all backpacking trips are awesome, some suck. This trip was of the latter kind. Be prepared for some foul language, therefore this post is rated R 18. It is also a very long story with plenty of photos, so better take a cup of coffee/ tea and enjoy.

A lone star appearing at dusk of day one.

It started out nice, the 3 hour ride to Salamajärvi NP went well, we arrived at one o'clock and despite the weather forecast's promised rain we had a blue sky and sunshine. Xavier packed his ULA Conduit and soon after we set along the short stretch of road towards the trail head. Some fishermen were ice fishing, a good indicator that the ice still carries, despite a layer of water on top. The Plan™ was to walk the 59 km Hirvaan kierros circle trail, but as so often with The Plan™, it didn't work out. 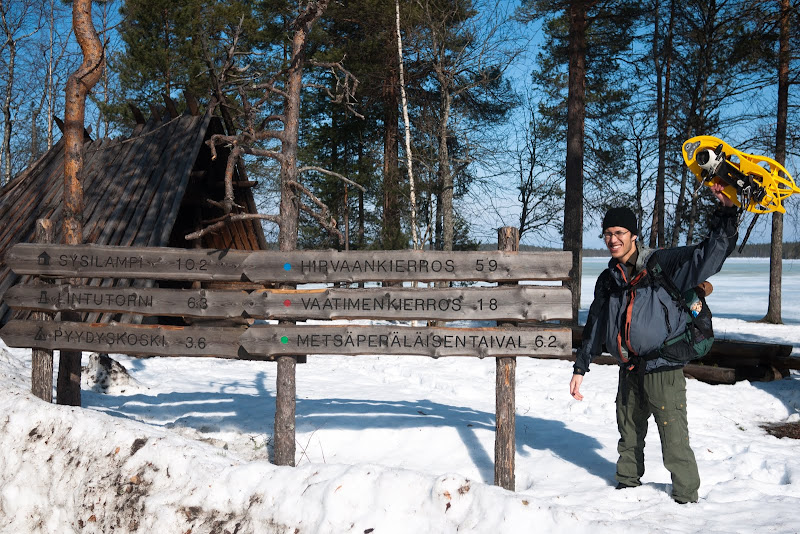 Xavier in a good mood at the trail head.

The trail was unbroken. We tried for a minute without snowshoes, but sinking in till over the knee doesn't make for good walking so the snowshoes came on. This improved the sinking in marginally, now we sunk in only till the knee, but every step was more difficult as the water soaked snow was heavy on the snowshoe surface, adding quite some weight to every step. Five minutes later I was ready to turn around, which I would have done if I wasn't with company. Easter 2009 I spent alone hiking in Helvetinjärvi NP and that trip of potholing was still fresh in my memory, I didn't need to add a further one to it. Xavier said this would be normal snowshoe conditions for him, and that he was up for a challenge. A challenge for me would be climbing a mountain in Japan with Chris and not potholing through a forest. 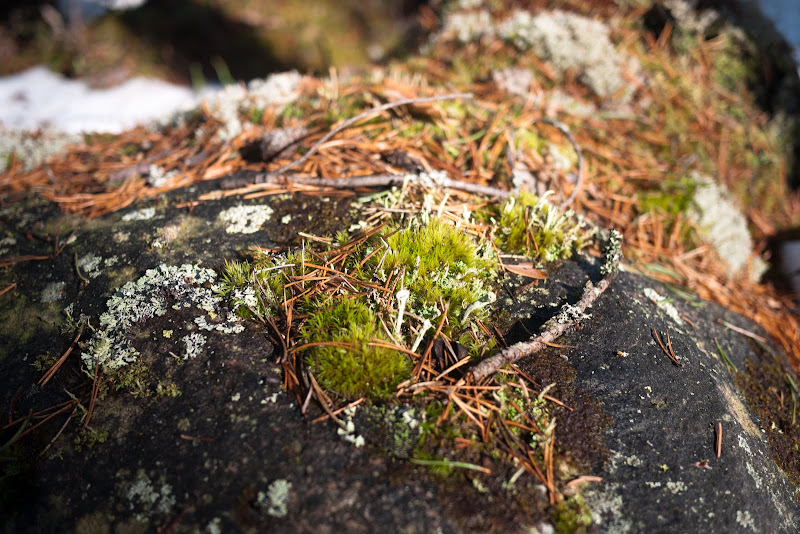 The moss was happy about the amount of wetness, from above and beneath. 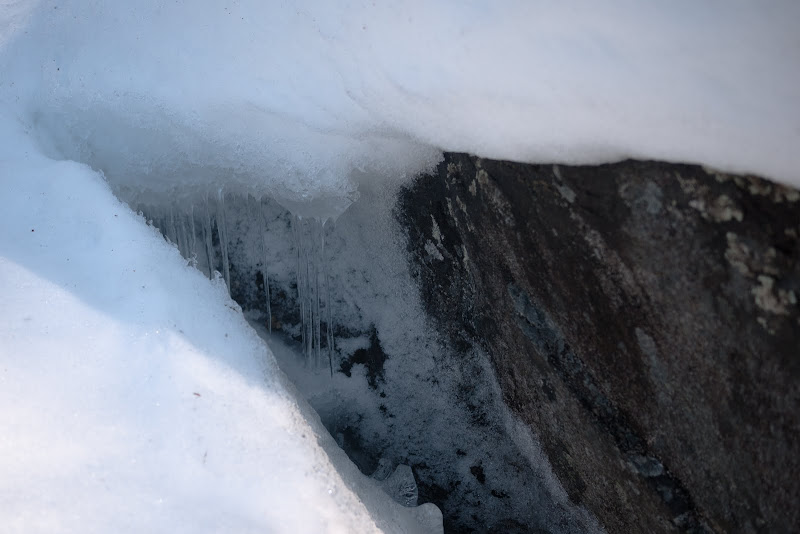 Finnish spring in the forest. 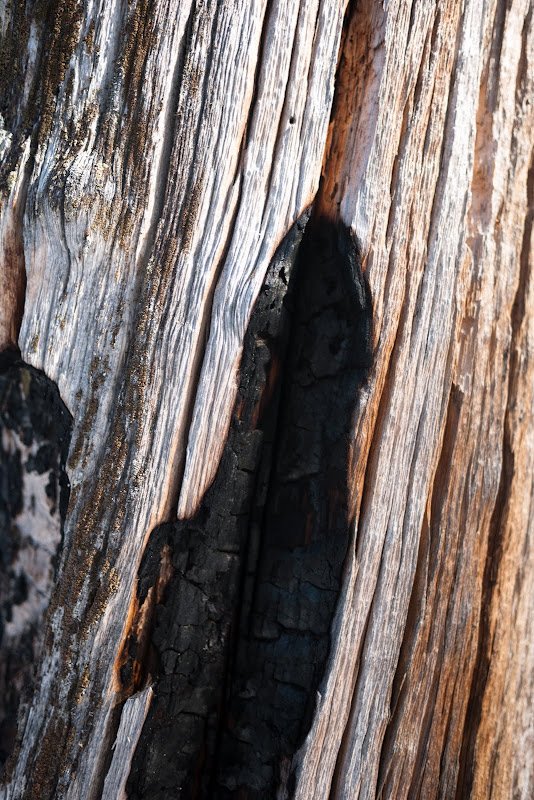 We continued, missed the first turn we should have taken and hence walked an additional five kilometers in these splendid conditions. The Plan™ of walking the complete 59 km circle was already buried, and so we decided to make the best of it. Because of the missed turn we went to Pahkahongankangas and further up to Pyydyskoski, where much to my pleasure someone with snowshoes had broken the trail for some part. Then 3,1 km through unbroken snow towards Heinkinjärvi, and while the sun was shining I was seriously frustrated. As we arrived at the lake, I spotted some tracks in the snow, and while we weren't sure then I now know that they were from a Wolverine - there are only around 150 of these in Finland, so quite a rare sight! With the lean-to in sight, my mood improved, and after a short break at the shelter I set off to explore the surroundings, while Xavier started the fire. 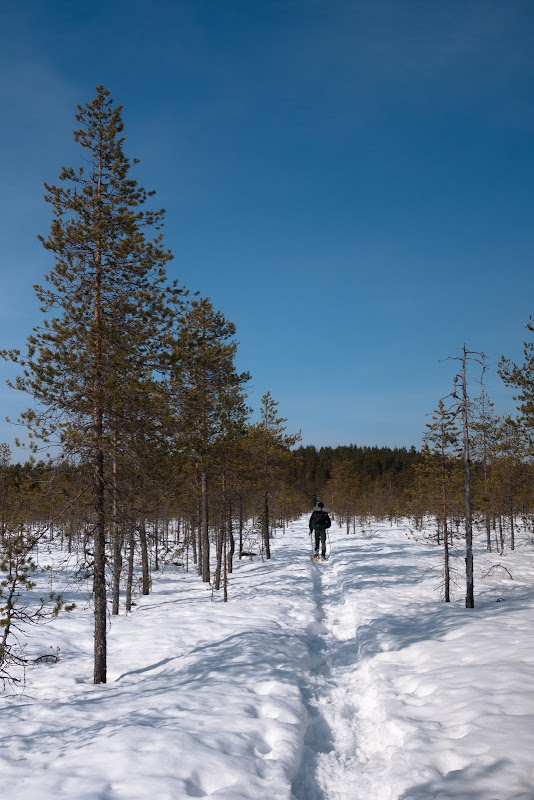 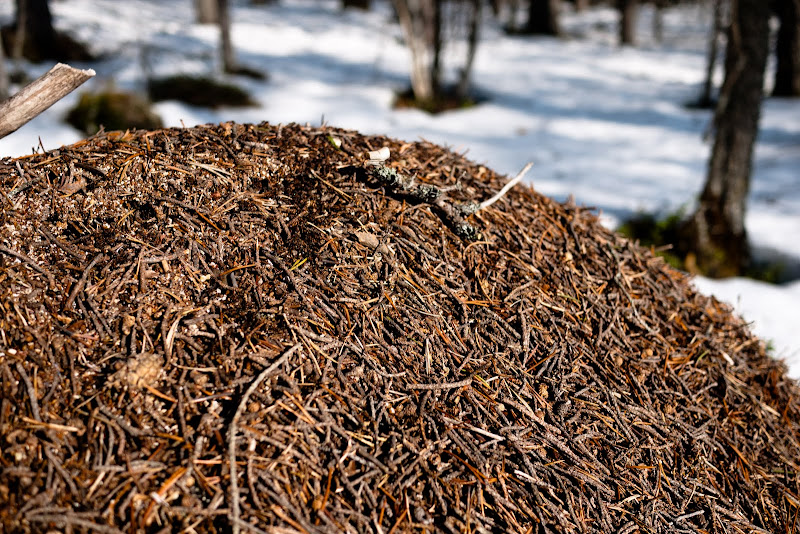 Ants are getting ready for the summer. 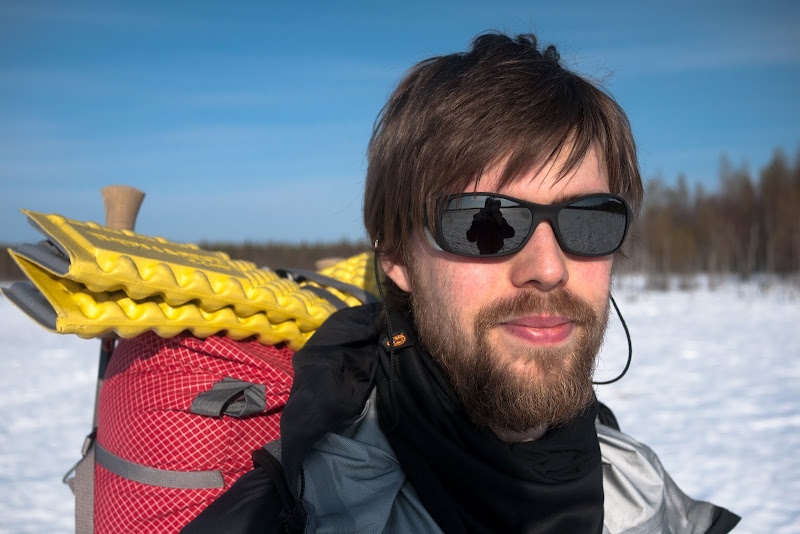 Close to the lean-to shelter at Heikinjärvi, I can almost smile. 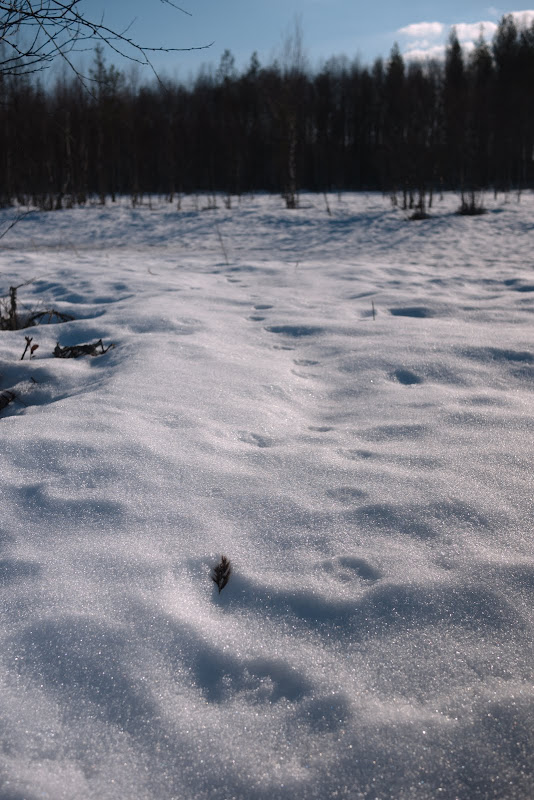 After my short trip I started to pitch the Gossamer Gear SpinnTwinn, in a nice spot, which will ensure the sun shining down on me in the morning. A pair of Whooper Swans was flying over the lake, their call echoing through the woods. With the very tasty Trek'n Eat Vegetable Puree with chili and hemp seeds, a kuksa of redwine, the warming glow of the fire and the pretty sunset, this was about the best moment on the trip. After a Trek'n Eat Mousse au Chocolate and a cup of tea I retired to my sleeping bag, falling asleep quickly. 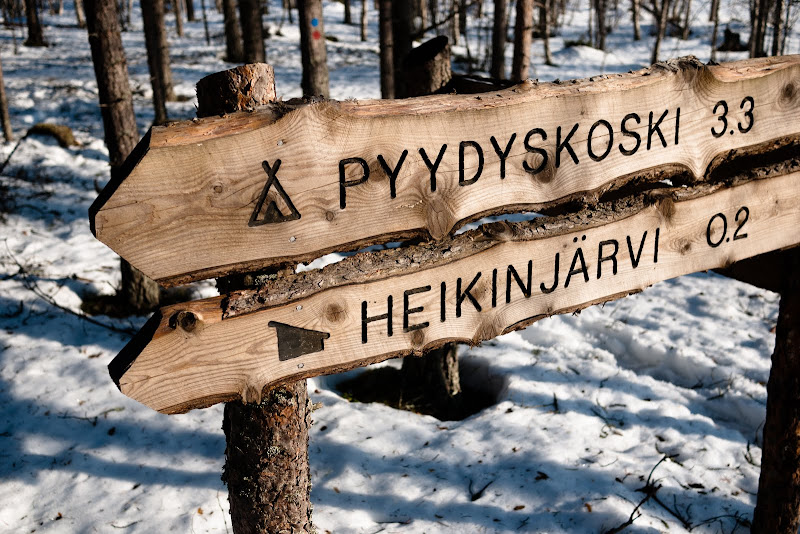 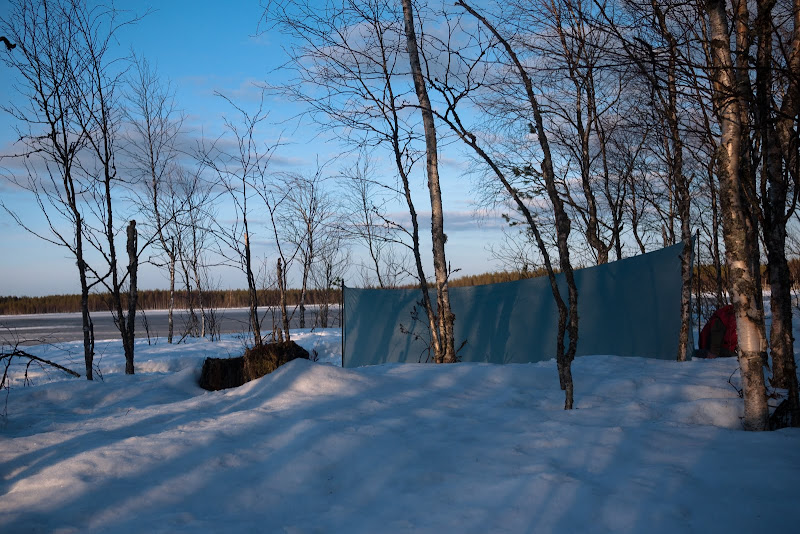 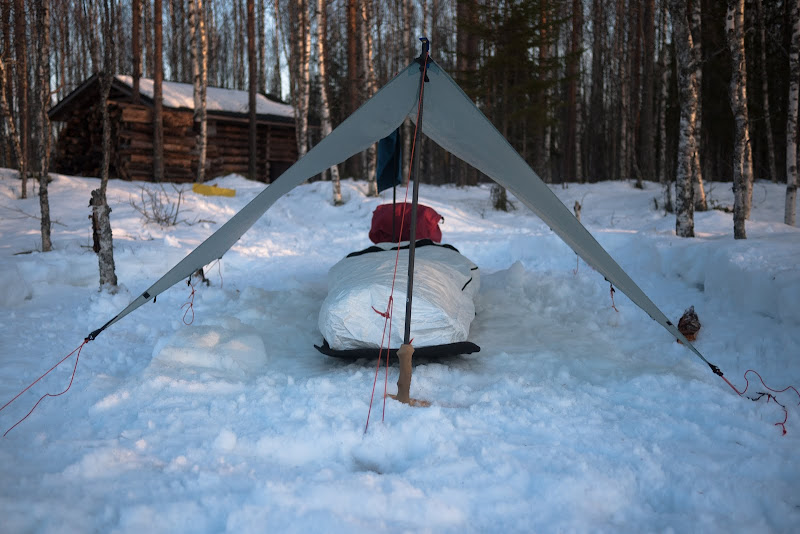 Home is ready, the woodshed in the background. 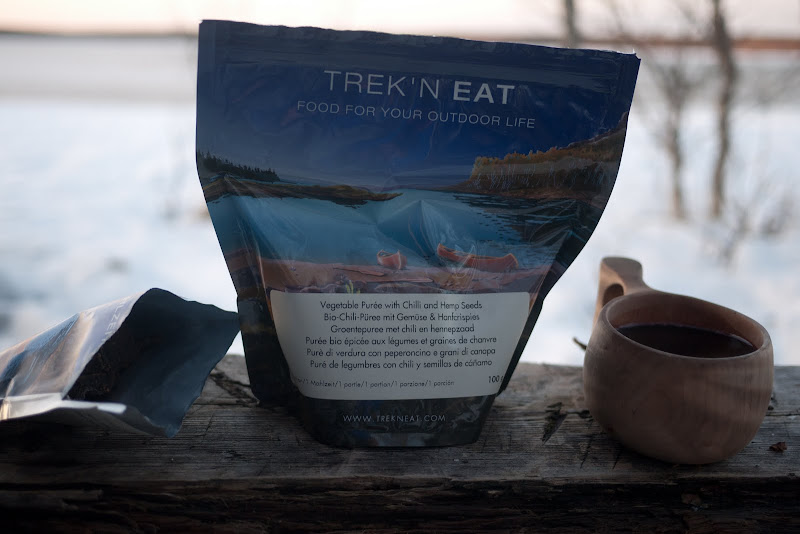 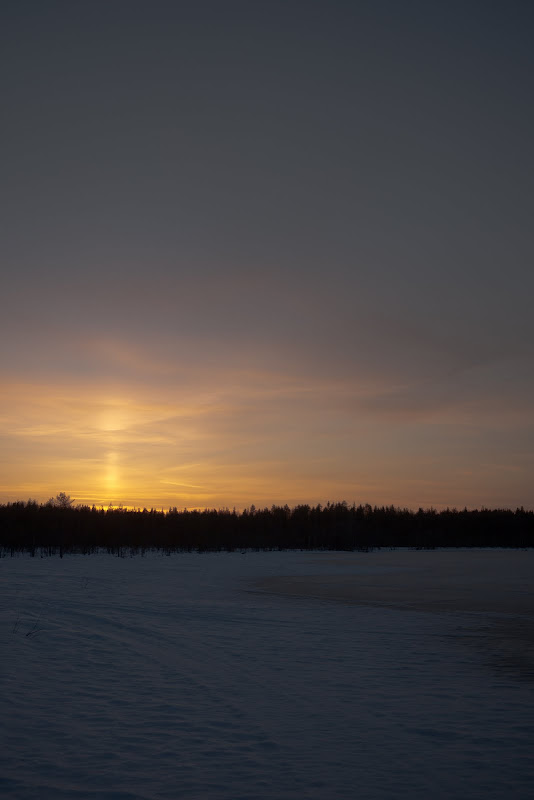 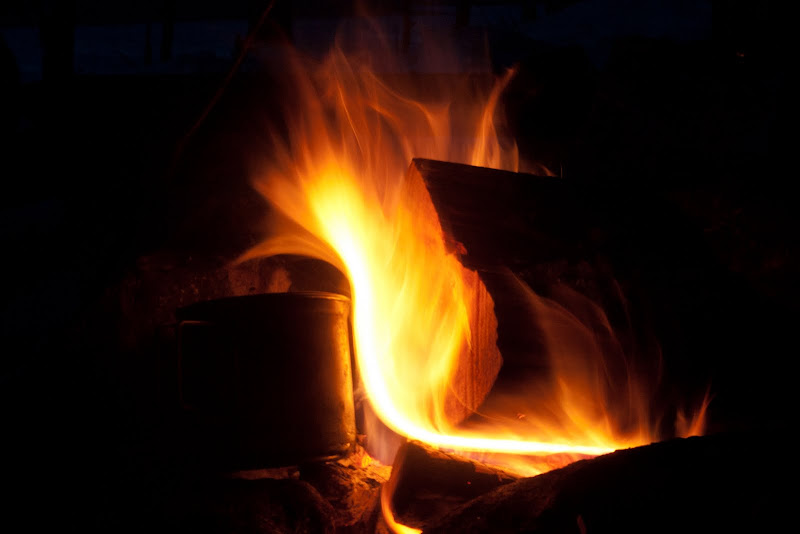 Boiling water for my evening tea.

The sunrise into the tarp never came. Instead, low hanging mist and rain which was falling on the spinnaker fabric of the tarp. The rain intensified the need to pee, and instead of getting into the hardshell clothes, have a pee and then getting out of them and back into the sleeping bag I decided to pack everything up and retire to the lean-to for breakfast. This was done in relative peace, I like rain but knew that this rain will make snowshoeing today utter misery. After the morning pee was taken care of, I decided to try to start the fire only with my puukko and firesteel, and after a while I had the piece of birch bark burning, and I was mighty proud of myself! The fire was burning well, and my coffee and breakfast water soon was hot. 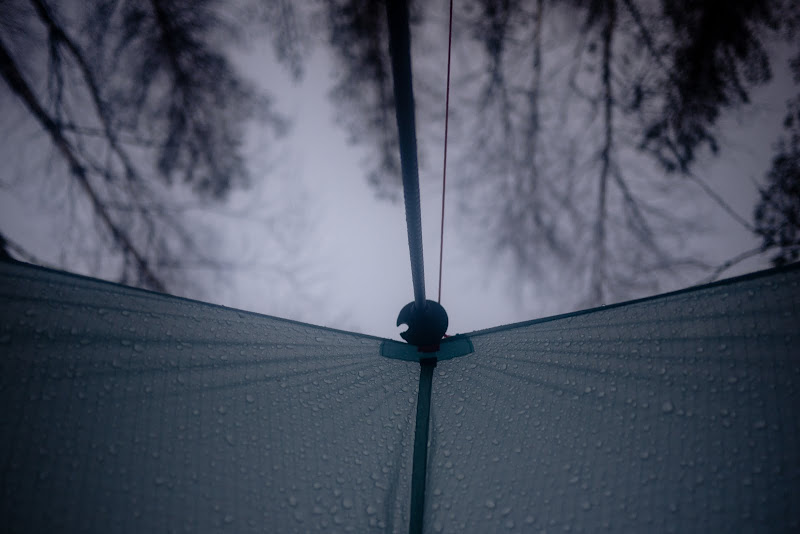 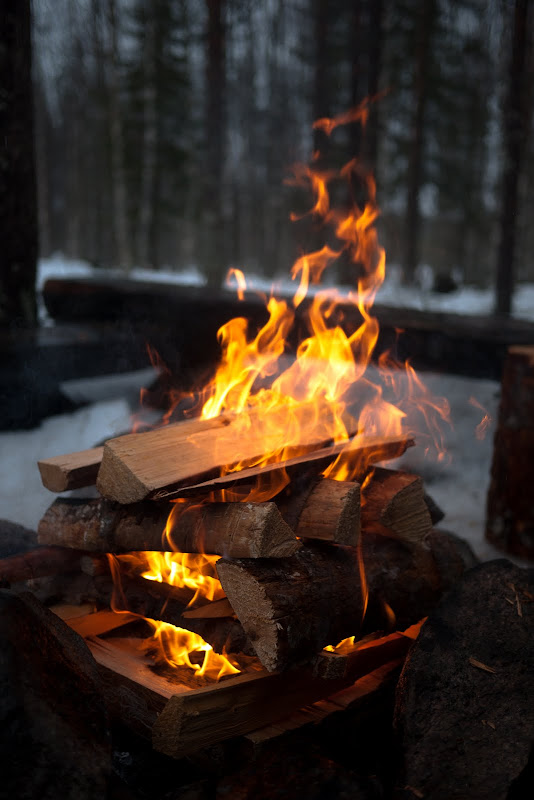 The fire which was made only with knife & firesteel.

As Xavier still didn't appear, I gave him a little visit, and still sleepy he said he shall rise soon. By the time he came I was fed and packed up, ready for snowshoeing in the rain. An hour later we hit the trail, and yes, it were the wretched conditions I thought they would be. The high exertion with the drizzling rain and general moistness brought the eVent membrane in the Rab Momentum jacket to its limits, and it felt like I was as wet on the inside as I was on the outside. We walked to Heikinjärvenneva, where a bird watching tower rises over the swamp, giving a great view but there was not much to see except mist, rain, snow. 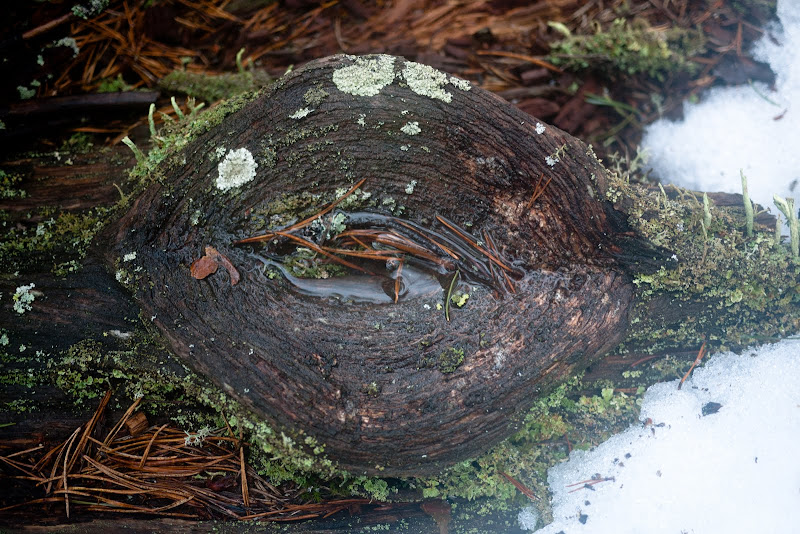 The Eye of Sauron. 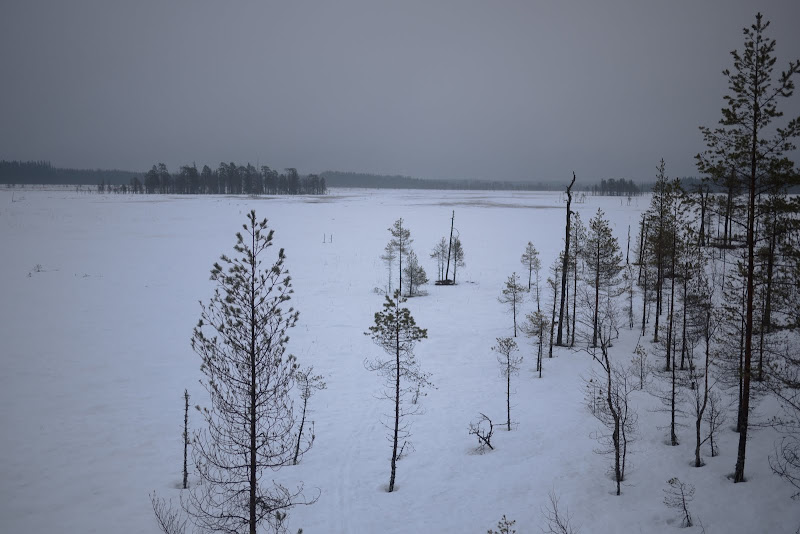 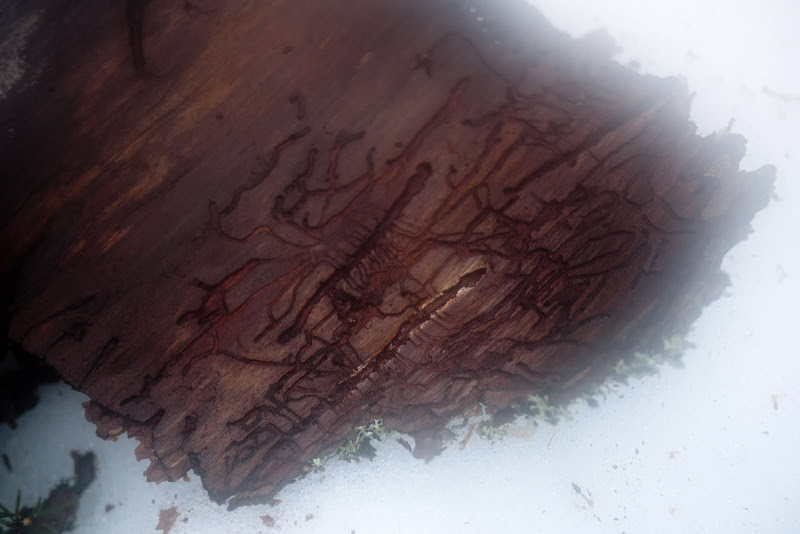 We continued towards Kaulus, an old smoke sauna building, and had a short rest in the cabin. A lonely skier peeked inside, said that he was on the way to Sysilampi cabin and will leave us a nice trail, and went off again. Motivated by the promise of a warm cabin, with an opportunity to dry the gear and ourselves, we continued and I managed to find a good gait and rhythm so I led for most of the time to Sysilampi. Arriving at the cabin, the lone skier was just eating his meal and chatting with his friend as we came in. Friendly talking about backpacking and trips ensued, and the misery was temporarily forgotten. 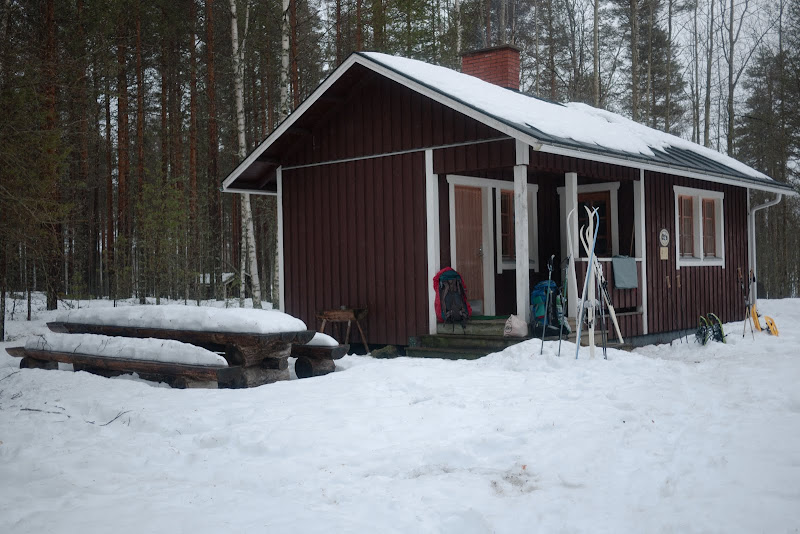 Sysilampi cottage. Previously this was a day trip hut, but now has mattresses and it is allowed to sleep in it.

The guys left, and soon after a group of three girls arrived. The cabin was big enough to house us five, but I decided to try and pitch the tarp, which thanks to the saturated ground was futile and so I told the girls that I'd retire to the room next to the woodshed while they could enjoy the cabin with the oven. The evening was spent drinking some more red wine and talking about this and that, and as the girls went off to the sauna I retired to my sleeping bag. 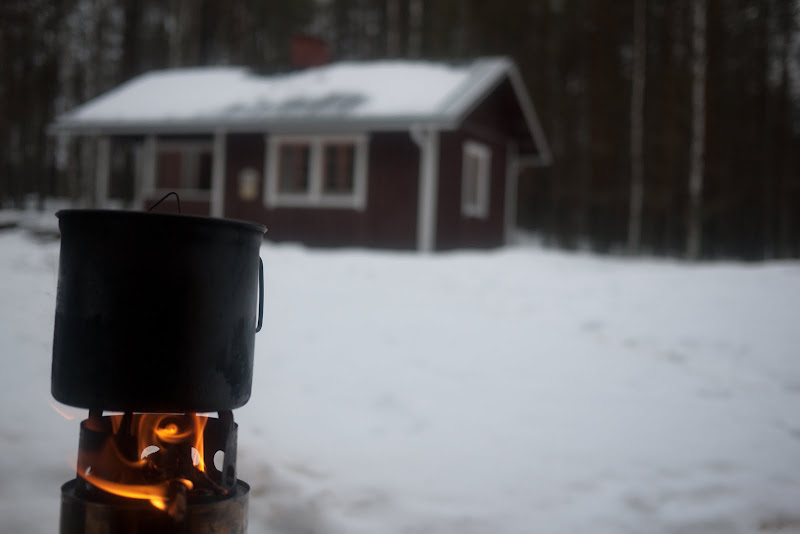 Boiling water on the morning of day three.

Last evening Xavier and I had decided to walk this morning to the parking lot 600 m down the trail, and follow the road back to the car at Koirasalmi. I was not willing to put myself through another 10,2 km of snowshoeing when I could just walk 12 km on a forest road at triple the speed and a kazillion times more comfort. After a breakfast of Travellunch müsli with orange juice and a cup of coffee, kindly provided by Mr. Macfarlane, we started walking. A mere two and half hours later we were back at the parking lot, I was happy to have put this behind me. In the car, on the way back to the main road I spotted a Western Capercaillie but by the time I had the Lumix GF1

out he had taken off to the top of a tree, and only aimed with the 20mm Pancake Lens

I wasn't able to get a decent photo of him. Ah well, their mating season is just starting so hopefully I will be able to see some and get a photo or two of them. 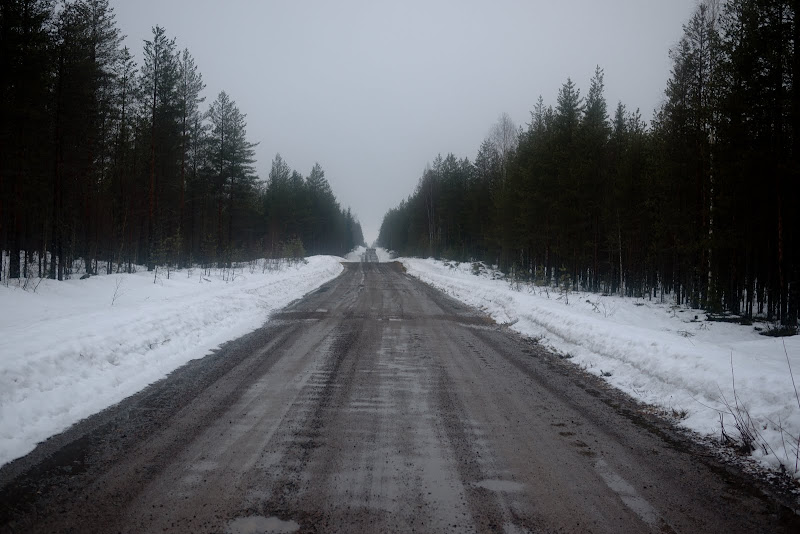 My frustration with the snowshoeing this weekend is simple: The snow didn't carry at all, and I broke in 95% of the time. Then the wet snow sat on top of the snowshoes, weighting them down and making walking a pain in the ass. What was very nerve wracking was that I never knew if the next step will carry or not, it did make a completely unpleasant experience. I asked the guys as the cabin how they fared in these conditions with the skis, and they said that on the swamp the skiing was OK while in the forest it was just as much of a pain as with snowshoes. So even with skis the whole trip would only have been around 30% better. While I am not normally someone who gives up easily, I knew I wouldn't enjoy myself plenty under this conditions and hence my readiness to turn around. I didn't turn around and while I had some good moments, I believe it would have been a better trip if either we would have had decent minus temperatures so that the snow carries, or there wouldn't have been any snow.

The national park was pretty, or at least what I saw of it - most of my concentration went towards placing the next step, so only once in a while I could take in the scenery. I plan to be back when the snow is gone, maybe in May or June, or then in autumn, that circle trail is still in my mind and I'd love to walk it. But for the moment, I will sit inside and wait till the snow is gone, as I don't need another rather not so nice experience - I go backpacking to enjoy myself, and potholing with snowshoes in the rain certainly doesn't count as enjoyment for me. 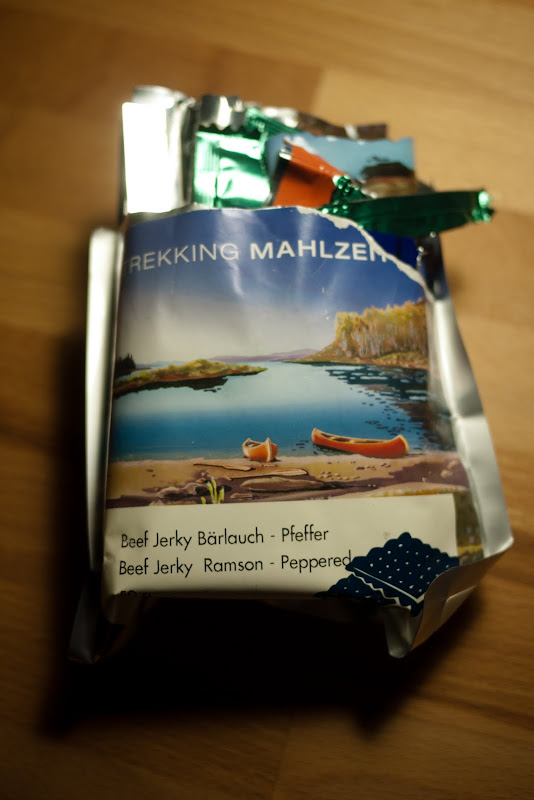 The garbage of the three days.