The food plan was one of the tasks which the planning group needed to carry out. We got a suggestion of meals, complete with calorie values et al. and it was aimed at a budget of about 6€/ day. I followed it only in part (we had two mandatory meals for the rest days, Borscht soup and Chili), but for the most part I sticked what I knew worked for me. The calorie recommendation was 3500 kcal/ day, which is far too much for me (I'm 175 cm tall, about 64 kg light) - especially given that we only walked between four and eight kilometers a day. Here's the food I took on the trip: 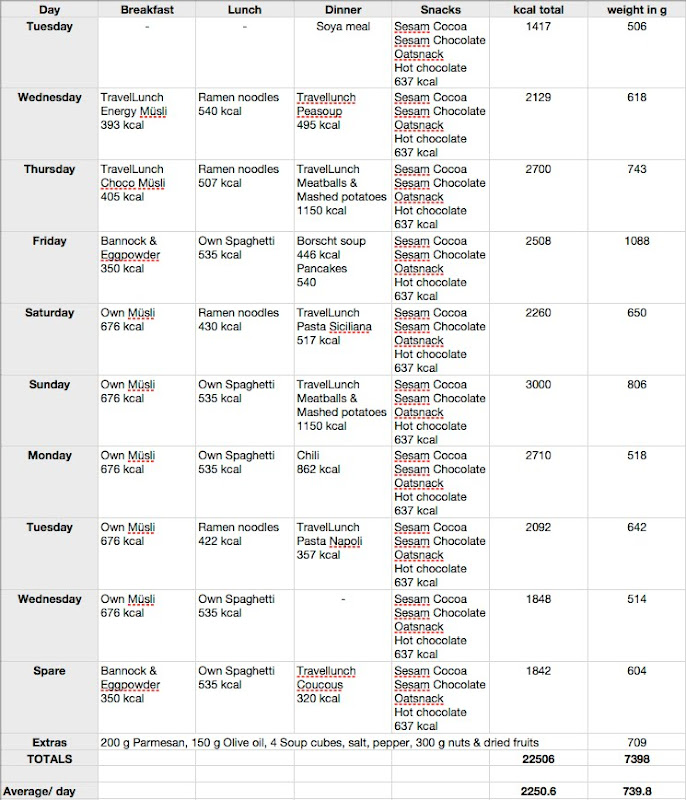 The food was more than enough, I actually had at the end 1731 g over (that includes the spare day of 604 g) and on the trail was dealing out snacks to classmates. Let me tell you what was good and what wasn't:

Breakfast; own Müsli vs TravelLunch Müsli. My own mixed Müsli wins, hands down. Not only in respect to taste, but also in calories. The TravelLunch Energy Müsli is terrible, I threw away most of it as I couldn't get it down. The Choco müsli was better, but still far away from my own creation. So own müsli in the future. Starbucks Via, which Phil bought for me, was my morning & lunch coffee. Very tasty stuff, super lightweight (a satchel is what, two or three grams?) and oh so convenient. Will need to order more for upcoming trips! The Bannock was good, the Travellunch egg powder wasn't. I'll try more Bannock in the future, especially on rest days a nice start into the day, easy and tasty. 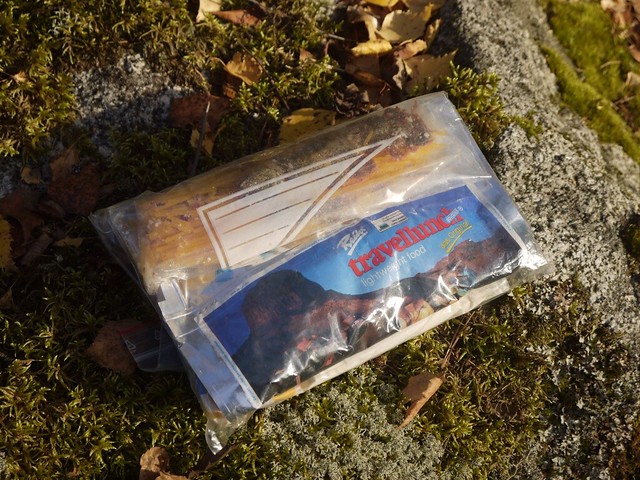 The whole days meal packed up.

Lunch: Ramen vs own Spaghetti: I dehydrated ready-made spaghetti sauce, one pot Arabica and one pot Gorgonzola, which was enough for six meals. I used Corn and Full grain spaghettis, broken into smaller sizes to fit in a Ziplock bag, where I added salt. Now, the Ramen noodles are fast and easy and have decent calorie values, but I much preferred my own creation, even if it took longer to prepare them. Instead of the recommended 1 l of water for 100 g of spaghetti, I only used about 300 ml and poured the whole content of a Ziploc bag in my pot and had it boil/ simmer for ten minutes, until the noodles were al dente. I then ate it as it was, without pouring away any water, which was super tasty. This was inspired by Ray Jardine, and it worked great. I think I might still use Ramen in the future, but my own spaghetti creation definitely will become a staple. 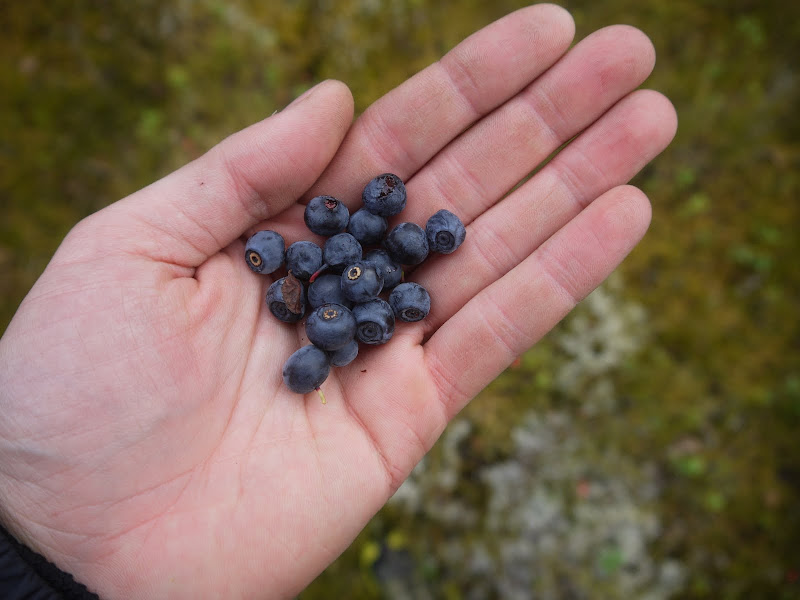 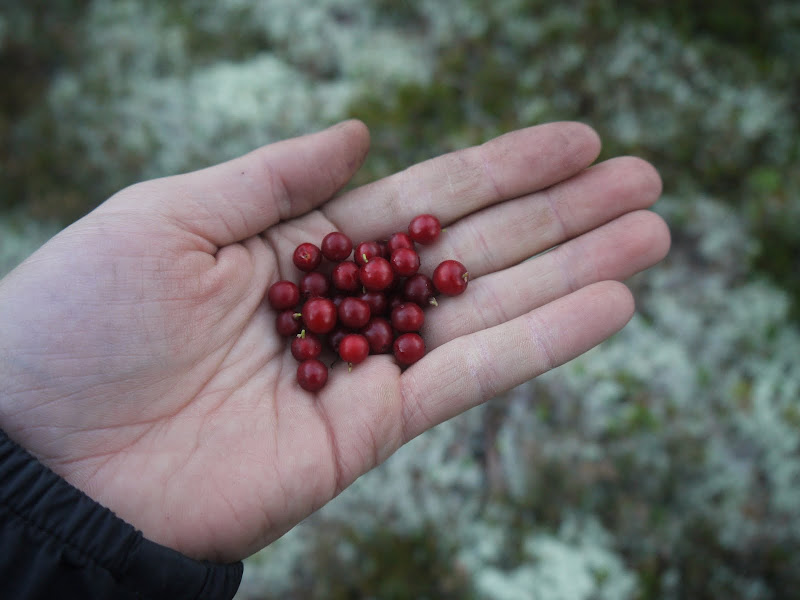 Blueberries and Lingonberries, a healthy and tasty addition to my diet on the trail.

Dinners: I was waiting for an order from Outdoor Foodshop, but because I was late it didn't arrive in time. So it was TravelLunch this trip, as my local outdoor shop decided to take Real Turmat out of the programme (bloody morons, those folks - taking the best meal out of the line-up, wtf?). I love the convenience of pouring boiling water in a bag, let it sit for five to ten minutes and ten munch without needing to do the dishes - that's perfect & simple. The meals all were tasty, my favourite is definitely the Peasoup, it is less a soup and more a potato mash with veggies, but I really love it. The other meals all were fine, the Meatballs was a 2-Person portion and was a bit too much for me, but otherwise good. But definitely looking forward to trying the meals from the Outdoor Foodshop on the next trips! 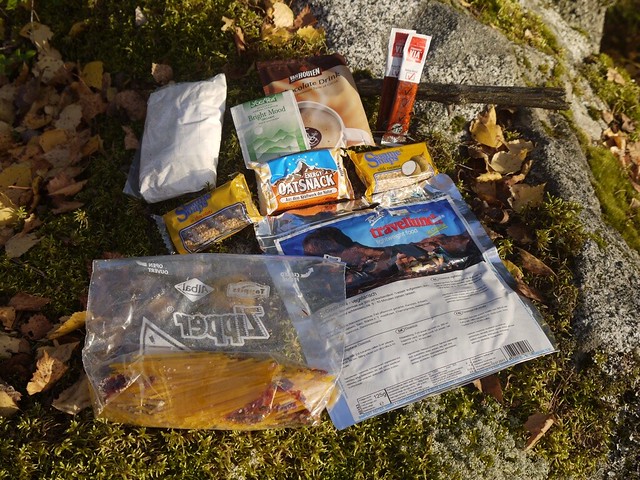 Snacks: Energy Oatsnacks rock! Super, super tasty and so much energy, these are a staple for me already. Many different tastes, from Yoghurt-Strawberry over Latte Macchiato to Cherry-Cocoa, I find them all very delicious and they have plenty of energy for their weight (67 g including packaging).

I found a new version of Sesame snacks, which come in plain, coconut and chocolate, the latter two are excellent and I never get tired of them, these are a staple on each trip. Add in a bag of Van Houten Chocolate as a night cap, and that rounds out my Menu. 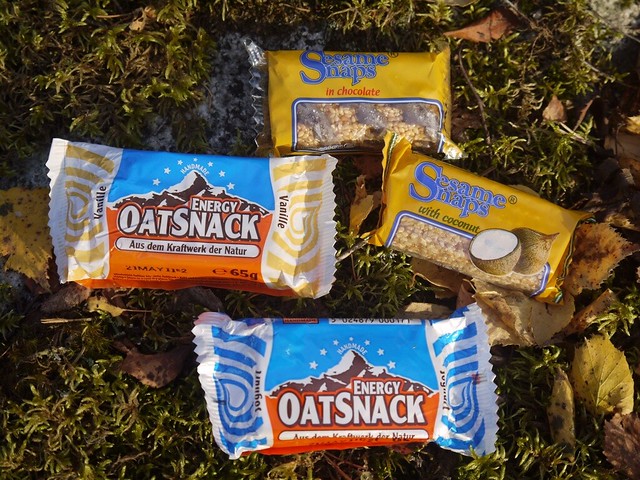 The mandatory meals we split up, me doing the Borscht and my food partner doing the Chili. Both were tasty, and not that much more heavy as a freeze-dried meal (I think the Borscht, which I carried, came down to about 180 g/ person and that was a massive portion). The Soya meal which I made on the first night was tasty as well, but with a preparation time of close to 45 minutes it takes far too long - something for rest days, maybe?

Add in the berries I found - Cranberries, Blueberries and Lingonberries - and which were consumed en route, it was a good and tasty trip. I remember walking the Karhunkierros back in 2008, with nothing but Supermarket Pasta meals for dinner, and they came out of my ears already on the third evening - dinner and lunch wasn't something we looked forward to, so in my opinion a healthy and tasty menu makes the outdoor experience much more worthwhile!

So this was my Russian diet. Fairly lightweight for an autumn expedition, I think - it could have been a bit lighter, but I ate very well and looked forward to each meal every day, which is a good sign in my opinion, thus I didn't mind the bit of extra weight (parmesan & olive oil). In future I might try, even if I like them a lot, a trip without snacks and only with nuts & dried fruits. Figuring out what is the right amount will then be paramount, I tend towards 75g/ day at the moment for spring till autumn, and around 125 g for winter? Also, dehydrating and mixing your own meals, while a bit of extra work, saves money and is good fun. With a dehydrator at my dispossable, I definitly will make good use of it for the next couple of trips.