From the beginning I knew that this is going to be a kickass internship. While the words "obligatory" always leave a bitter taste in my mouth, I decided that an internship, even if obligatory, would be beneficial for me in many ways. As I rather do my practical training with a company I can look up to and which gives me a good and appropriate task, the companies to choose from got small. Very small. And so I sent off last autumn one email to Upitrek, asking if they'd like to enjoy my free labour for a few weeks in the spring. The answer came soon and was positive, and so I studied the Upitrek website, their different winter programmes, and kept in touch with them. 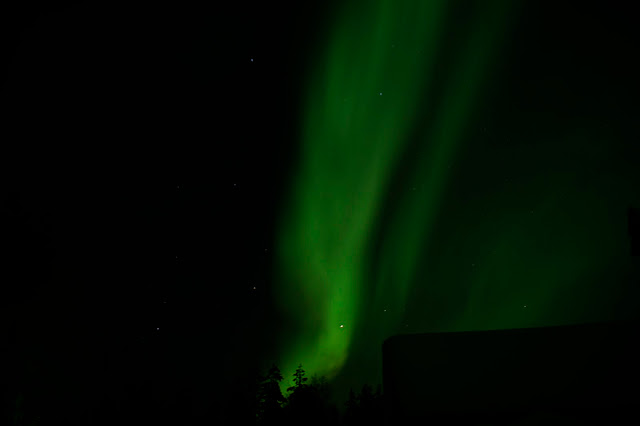 At the end of January was clear that I will go on their Russian Border Tour and the Winter Fun in Finland Tour. Lots of skiing first, and then some more skiing with snowshoeing, husky sled driving and a visit at a reindeer farm. It could be worse.

I arrived on the 27th of February in Kuusamo and continued to the airport, where I would meet my fellow guide and our clients. Much to my luck, my fellow guide Laura is someone I knew already, and our clients would be Dutch. After we collected everyone, stored their luggage in the trailer of the bus we started the drive towards the Hossa Hiking area, where we would start the trip. During the dinner I then revealed that I spoke and understand Dutch, which created some good laughs among the clients =) 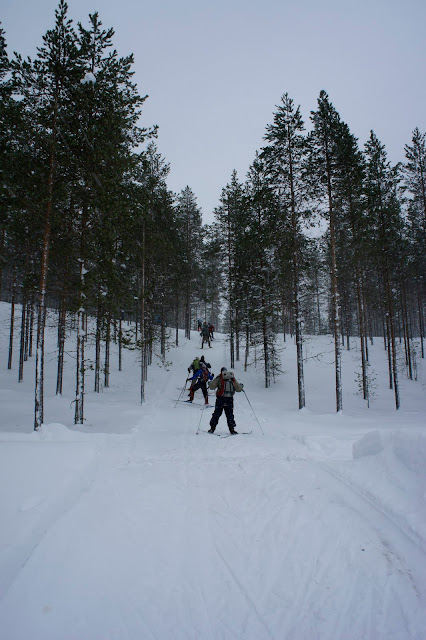 After breakfast on Monday morning all were eager to start skiing, despite the snow and wind outside. Day One started rather relaxed, and after a while everyone was back in the rhythm of kick-and-glide and it took just a bit under two hours to reach the first lunch place, the Hossa Visitor Centre. We enjoyed a look around the Museum which described the history of the area and its flora & fauna, before sitting down for a good lunch next to the fire place. 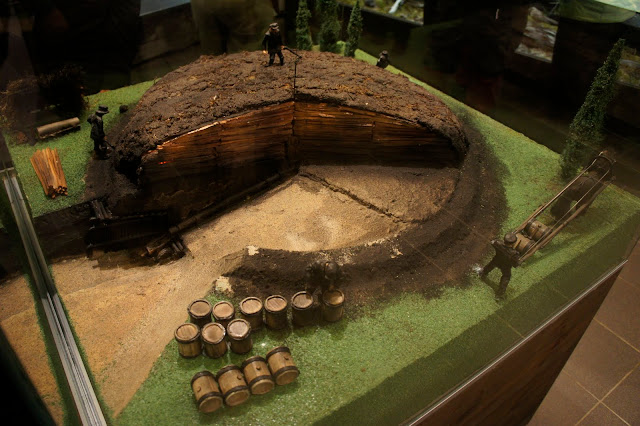 At the Hossa Visitor Centre Museum.

In the afternoon we continued skiing for another two hours, with a brief visit to the Reindeer Farm, before going to the hotel, the Hossan Lomakeskus. Sauna, dinner and some conversation before going to sleep. This was an easy day, and I had my own skis on, which wasn't a problem as the distance was short and I was the guide at the end. Though the next day we'd be skiing 25 km and I decided to switch to real Langlauf skis (44 mm width), which were a lot lighter and faster. I combined the boots with my new Urheiluareena Pilot overboots, which kept my toes warm and dry. A smart decision, as I would learn the following week. 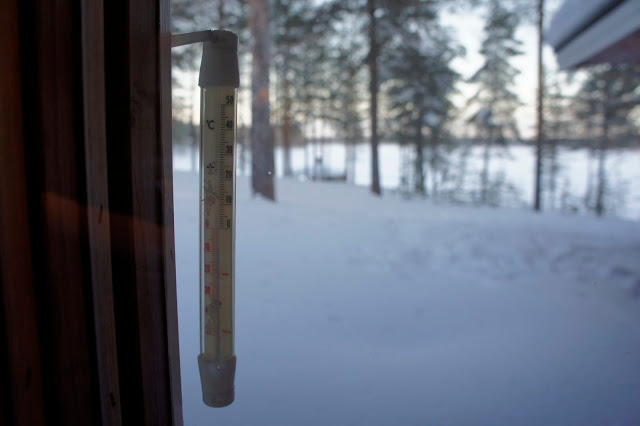 After a late breakfast we left the hotel, for a 25 km skiing day. Today I was the leading guide, which was a bit of an extra challenge in addition to the new skis. But the first 11 km to the lunch place went smooth, through fine forests, over lakes and swamps, always following the track our snowmobile guide has made for us. Arriving at the lunch place we were welcomed with a warm cup of hot juice, a delicious soup as well as bread - something to look forward to after a morning's skiing! I helped serving while the clients one for one arrived, everyone in their own speed - it was their holidays, after all. 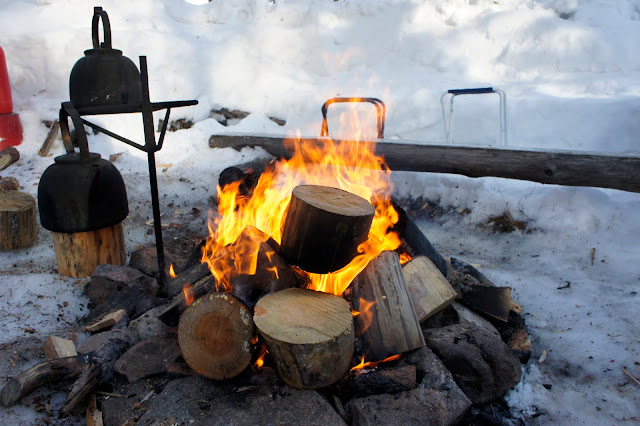 Well fed and with their thermos cans refilled, we started again. The sun was warm and the conditions for skiing great, and again I took off with the leading group. More swamps, lakes, hills, forests to ski through, and after a final climb we reached Kovavaara, the destination for the night. 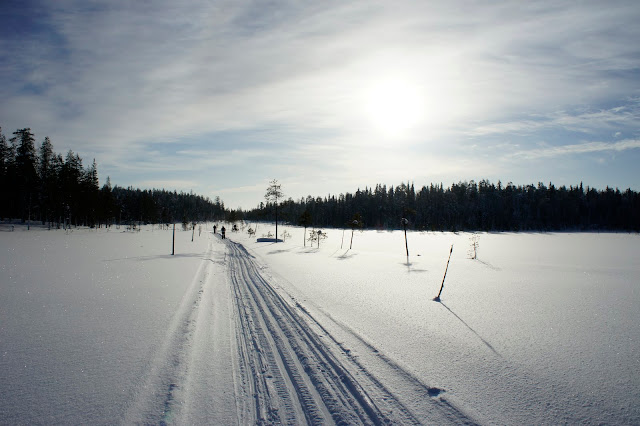 Over a swamp, along the Finnish - Russian border.

Again our great snowmobile guide Antti was waiting with hot juice or tea and breads for the hungry skiers, while I tried to stretch my thighs - it was exhausting, that skiing. After the last ones arrived, the clients were shown their cabins, the sauna and toilet while Antti, Laura and me prepared the dinner and warmed up the sauna. In the sauna with the clients I introduced them to the great "Olut löyly" which was much liked, and after a refreshing wash with snow all headed back to the main house. Antti prepared a delicious dinner, and after that the Northern Lights spectacle began. 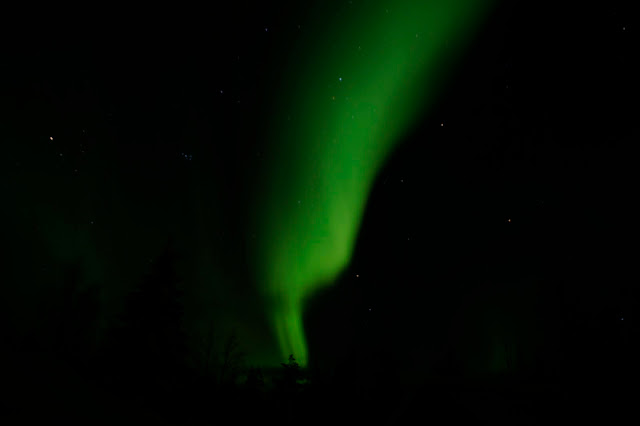 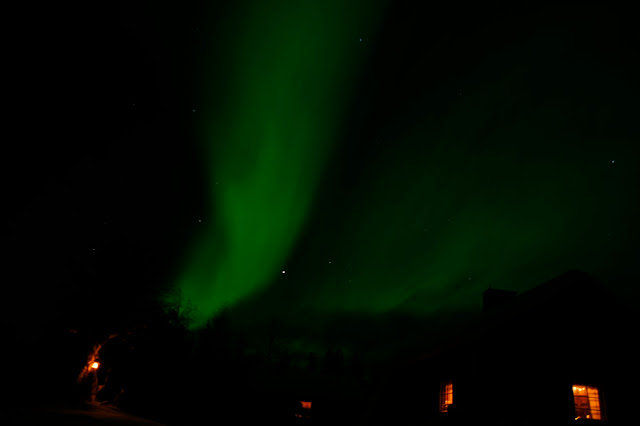 The Northern Lights were spectacular, and our clients were very delighted to have witnessed them. With a smile on their face everyone went to sleep in their warm cabins. The next morning came, and Antti and I started to prepare the breakfast. It was a beautiful morning, with fine sunshine and crisp temperatures. After I did the dishes for 18 people we set out, today I was again the guide at the end, which was perfect as I still felt my tights.

We continued along the border zone in perfect skiing weather, with clear views towards Russia as we skied in our snowmobile-made skiing track. Short breaks to snap photos, or to have a cup of tea and a snack were had, until we reached the lunch place. Hot juice, good soup, breads, fire, a welcome routine. 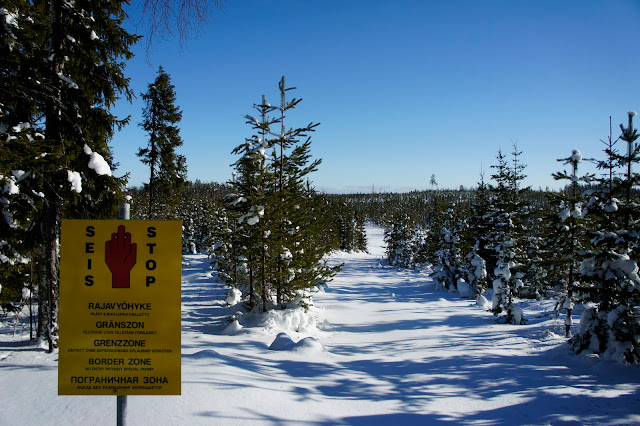 Do not cross! There be dragons on the other side =)

After only skiing 17 km today we reached Arola, where we were welcomed with the most delicious home-made pie and great coffee - just thinking of that pie now makes my mouth watery =) Some clients went for an extra round skiing, while others went to their apartments and got ready for sauna. After sauna we were again treated with the best home cooking on this trip, with delicious elk, pikeperch, mashed potatoes and a variety of vegetables and salads. Everyone enjoyed the great food, and after an equally fine dessert we retired to our rooms for a good nights sleep. 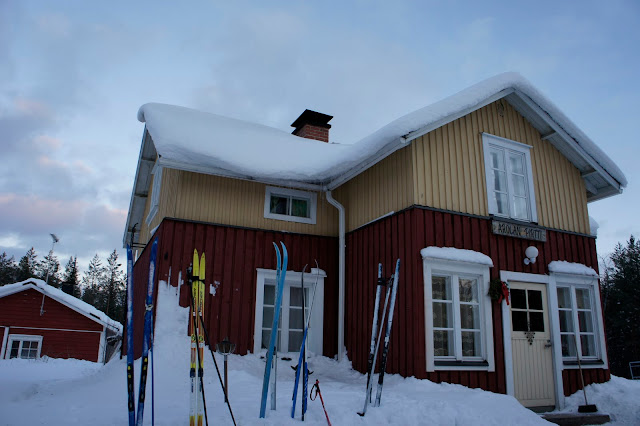 Day Four was a daytrip, as we would spent another night at Arola. A good 20 km skiing in less than perfect conditions - from white-out and over-blown tracks to full frontal wind and snow sticking to the skis, but fun was had by everyone nevertheless. Another fun evening with sauna, delicious food, song and laughter was had - as you can see this guide life is hard =) 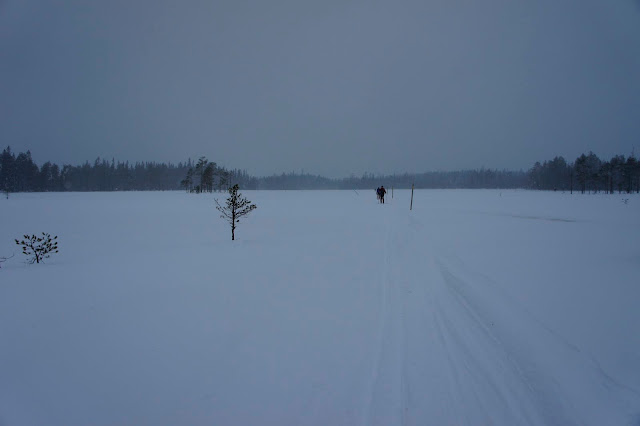 On the fifth skiing day I again was at the end of the line of skiers, and after a final good breakfast at Arola, many thanks and good byes to the perfect hosts we continued onwards. Another short day with only 17 km, and to mix things up lunch was next to a very nice hut, which was welcoming after the first leg of skiing. 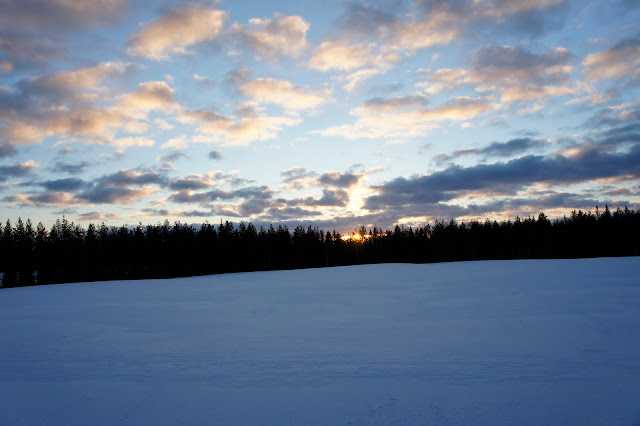 After lunch we continued towards Martinselkoksen Wilderness Centre, where we were welcomed with coffee and pastry. If you start to think that there's a lot of food involved, you're right! We were joking with some of the clients that it is more like a food trip with skiing in between =) Again the sauna was visited, "Olut löyly" was enjoyed, before dinner was served. The evening was passed by playing fun games and chatting, before slowly everyone retired to bed. 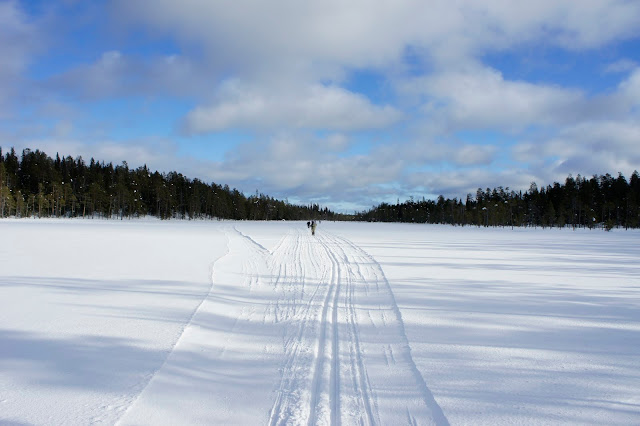 Saturday was the last day where Antti, the snowmobile guide, would make a track for us. The group of fourteen clients was fairly split in the middle between those who would like a longer round, and those who'd prefer a shorter round. I was happy to go with the short (17 km) round group, and retire early - after all, there was sauna, dinner and evening programme to be enjoyed. 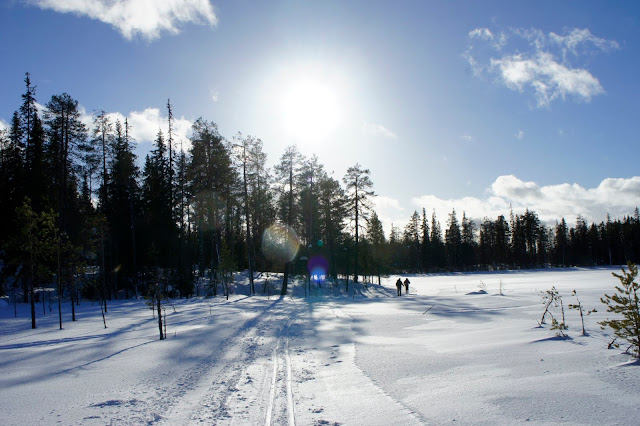 A last fine day of skiing.

Laura had a bag of instruments with her, and our impromptu jam session was fun and a great way to spend the final evening. More games and some fine Dutch Jenever made it an "gezellige avond" as we say in Dutch! 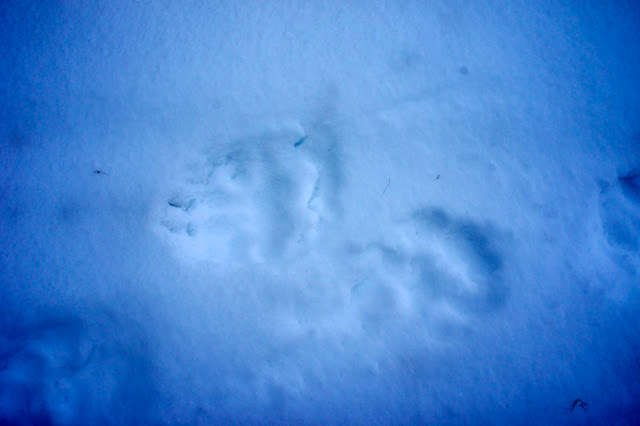 Sunday Laura left early and I was responsible for keeping the clients happy until the bus to the airport came to pick us up. Part wanted to go for a stroll, others wanted to try snowshoeing and some went for another short skiing round before packing commenced. 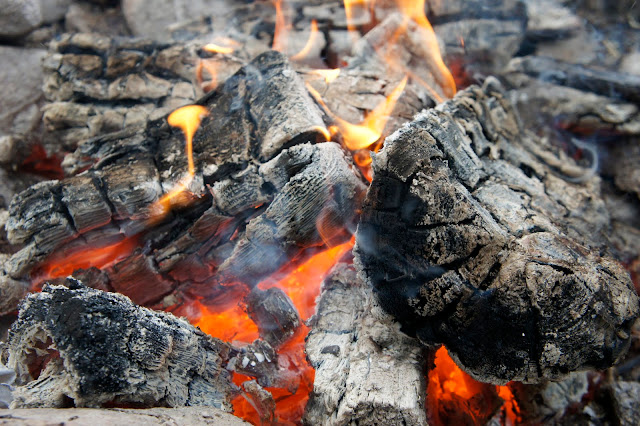 As the bus finally arrived we packed the gear into the trailers, before the trip back to Kuusamo began. And so my first week as an "apprentice guide" went towards the end, but even before we reached the airport I left the clients with a nostalgic feeling as I went to meet the second group, and a new "Master Guide" for dinner in Kuusamo. 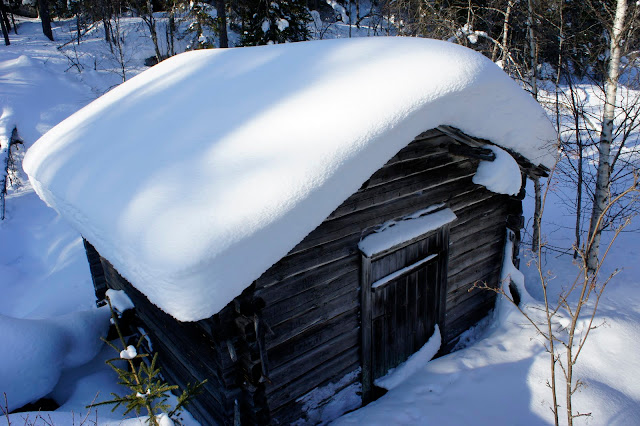 A old mill we visited on the snowshoeing trip.

Looking back on this week, after an estimated 111 km of skiing, six saunas, five different beds, plenty of tasty meals and fourteen happy clients, I know I made the right decision to do the wilderness guide education and do my internship with Upitrek. If this trip sounds appealing to you, and you want to hone your cross country skiing skills in pristine Finnish wilderness, all while staying in a warm bed at night with plenty of good meals, check the Russian Border Tour site at Upitrek - and who knows, maybe we might meet in the future on a trip like this!