Four weeks ago, right after we came back from the canoe trip, we had our Professional Examination. As I know that many readers are following this story of my IWG education, I thought to share it with you - also future students certainly will appreciate to know what is in store for them!

The Professional Examination has three evaluators: A teacher from the school (non of our own teachers, obviously), an entrepreneur who has his own guiding business and a wilderness guide. All three where really cool guys, friendly, funny and with plenty of experience between them. 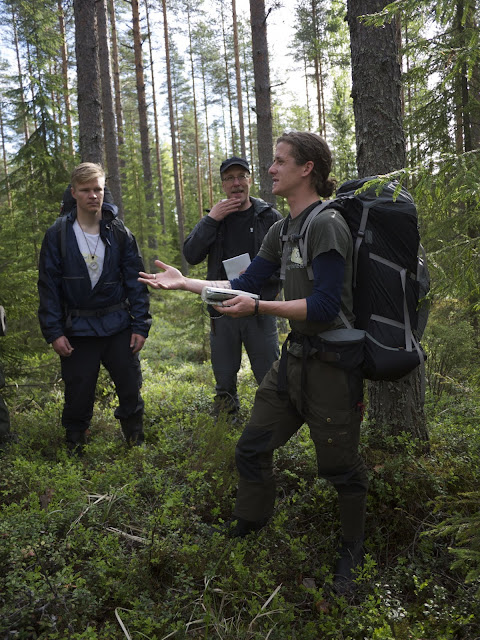 So, the story starts on Tuesday morning at 8 o'clock. We each get a map, and will be told later on with whom and to where we need to guide. They went in alphabetical order, which meant I was somewhere in the middle. Our Aussie and Belgian classmates had the honours of going first and setting the benchmark. We jumped in the cars and drove off into the forest, where our two teachers would drop us and take the cars back.

The task was to navigate to a point on the map, off-trail of course, and en route disclose some nature knowledge - be it about birds, trees, mosses or any other flora & fauna is up to oneself. The rest of the class was instructed to be "good clients" and don't make trouble, and to top things of we were also seriously lucky with the weather - the thermometer was upwards of the 20°C mark and it was nice sunny. 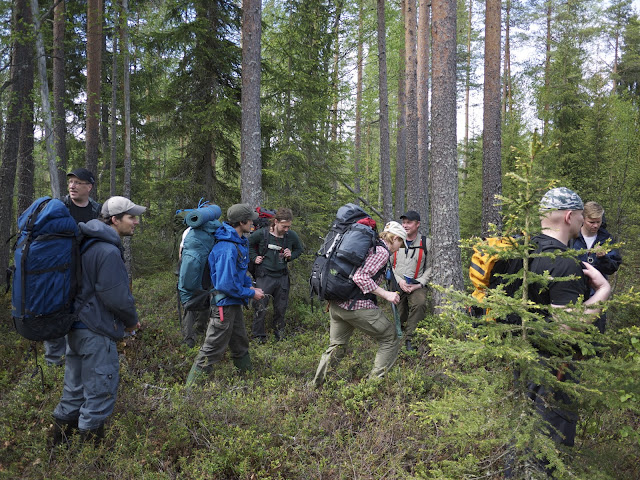 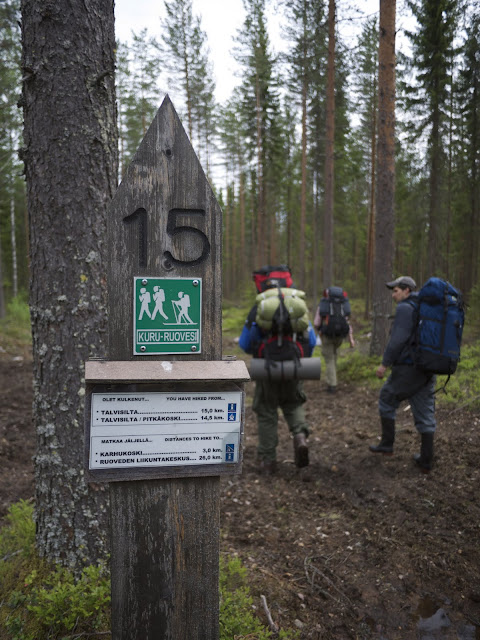 Onwards through the woods.

The navigation & nature knowledge part was done fine by everyone, and the last part of the journey was to be traveled via canoe, paddling some three to four kilometer over the lake to our final destination. Once we arrived there, we loaded the seven canoes back to the trailer and immediately got our next tasks. 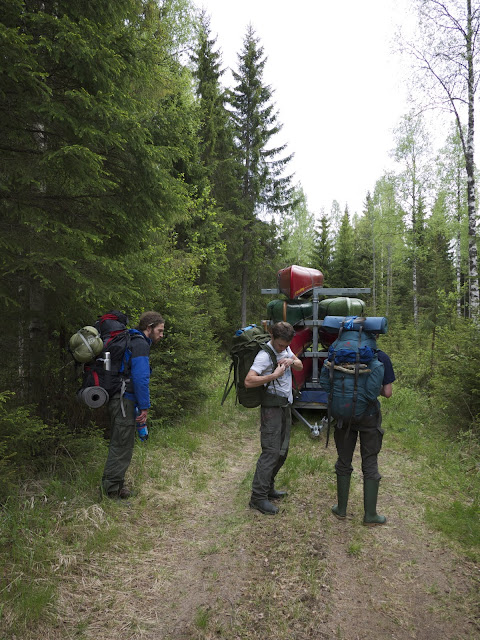 Arrived at the canoes! 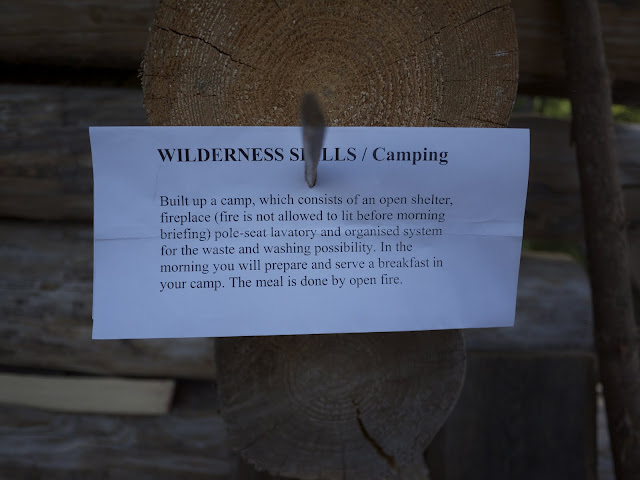 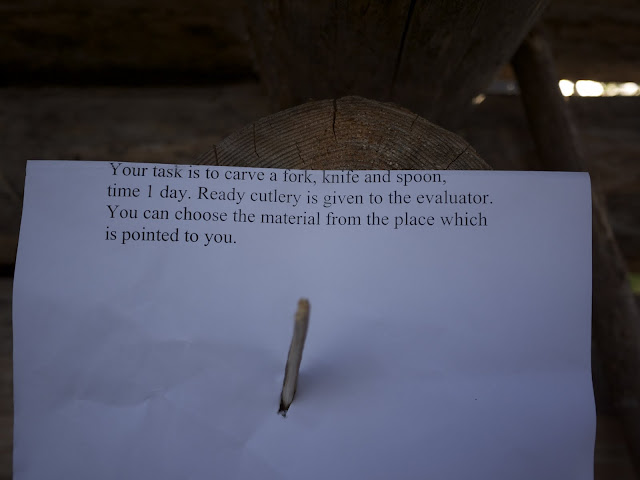 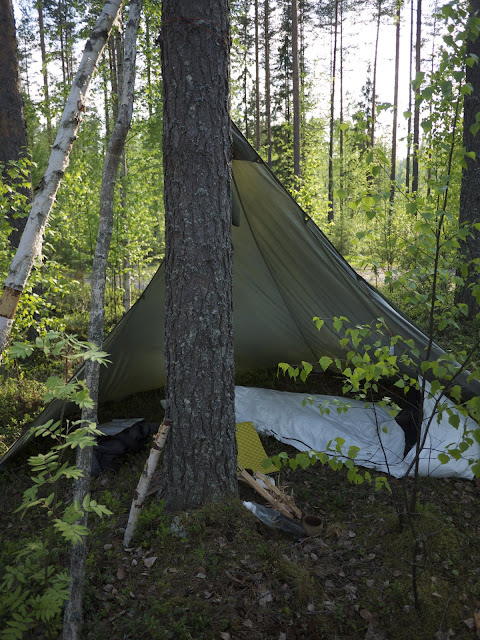 We had three hours to build our camp, the fireplace & toilet, and start carving; while at the same time we were called in for additional tasks. It really was very fast paced, and the time flew by. I was testing the sharpness of my Gransförs Bruks axe and found out that it is sharp enough of to cut a good piece of skin of my hand, and thus made use of first my own First Aid kit and then consulted my classmate who's a nurse, who did a superior job than me. Continue with a bit of a dressing =)

The "in-between" tasks were to explain fishing laws in Finland and setting up a rod & reel for pike fishing, followed by demonstrating your knowledge about sharpening your puukko and knots, and finally using a GPS. The first three were no problem, and while I was able to use the GPS to get the location coordinates, I misunderstood the second part of the task and did poorly in it. In hindsight I found out what was wanted: We were giving coordinates and needed to locate these on a map. I was able to do this, but because I misunderstood and thought we should locate our current location, I failed this part (Future exam takers probably want to know that the coordinates given are not the coordinates of the current position, but of another place. If you know how to read GPS coordinates on a map it should be no problem to find the right spot =).

This took a bit longer as expected (11 students doing all of the above), so at 21 o'clock we gathered around to hear the final task of the day: Prepare your own dinner with the given ingredients, on a wood fire, time is 90 minutes, evaluators will come by to sample your dish. Ingredients at our disposal: A complete perch which you needed to prepare, potatoes, onions, turnip, carrots, dill, half a lemon, some butter, oil and creme as well as several spices. As much as possible needed to be used, and I used all except the creme; and you needed to start your fire not before you had collected your ingredients. 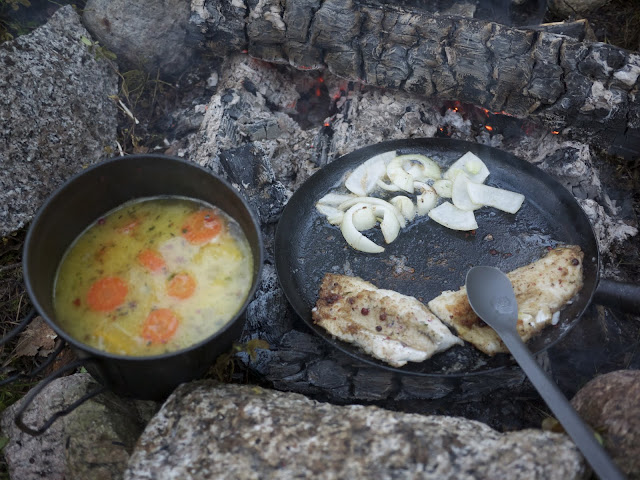 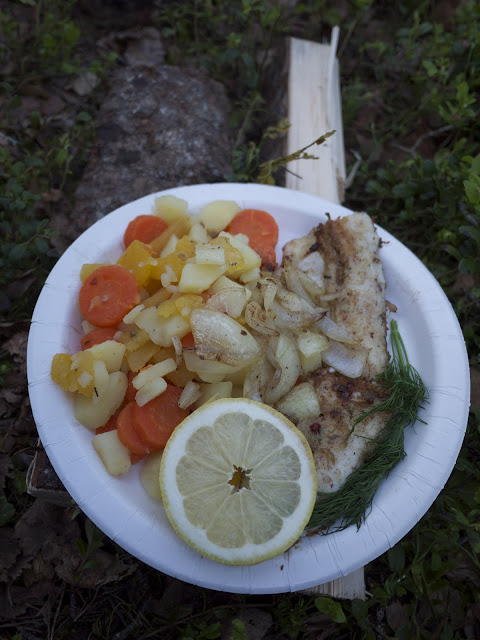 I opted to filet & fry the perch, boil the veggies in water, salt & butter and garnish the whole thing with a slice of lemon and some dill. I was the first to finish cooking and got good marks for my dish - it was a tad to salty they said, though I need to point out that Finns & Central Europeans are on different saltiness levels. So all in all I was happy, and yes, it tasted fab - it was a smart move on my side to loan a frying pan from the school, as without that cooking would have been slightly more difficult! 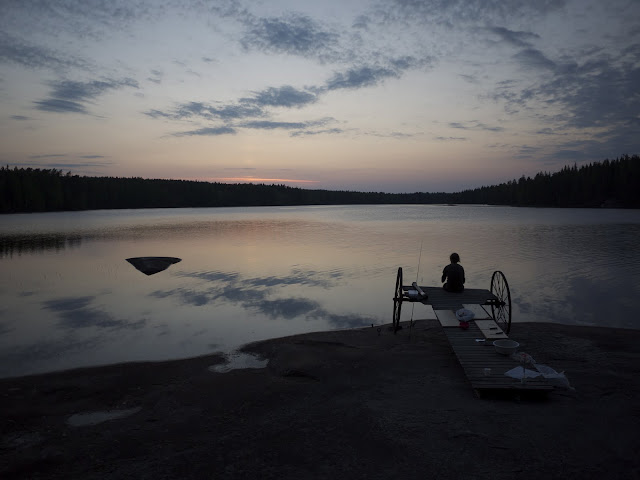 Eating dinner with a fine view.

After cooking and eating I continued to carve a bit, though as dusk was setting in, as did my tiredness - I got up at 5 o'clock that morning - I decided around midnight to go to sleep. I went into my lovely LAUFBURSCHE tyvek bivy, said good night to the army of mosquitos sitting on the no-see-um mesh and went dreaming.

At six thirty I got up again, the sun already was shining since a few hours and at seven o'clock we needed to be ready for the next tasks. Yeps, more tasks, more cooking! Eggs, bacon, bread, salad, tomatoes, cucumbers, needed to be transformed into a palatable breakfast. 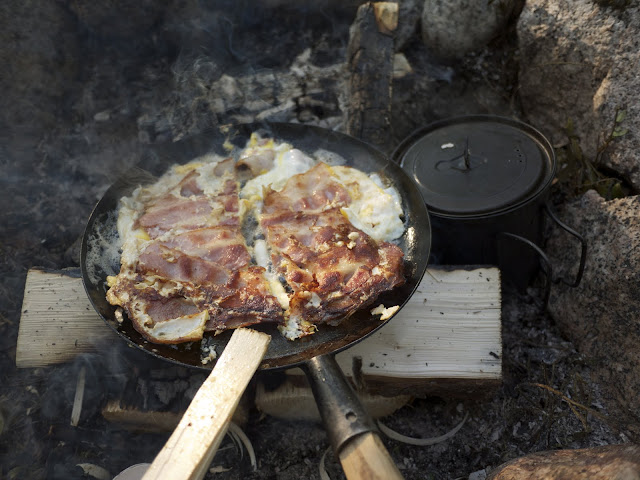 I opted for a rather basic fried bacon & eggs with veggies sandwich, which was well received. The evaluators came to check our camp, while we again went one-for-one through the task of explaining a Optimus Multifuel stove. After I successfully went through that I explained the teacher how my BushBuddy Ultra worked =)

The next task was to break up camp. An evaluator came by to check if we were able to break camp and "Leave No Trace" - I was so good in hiding my fireplace that he didn't find it =) Then I needed to explain how to pack my rucksack, and show how and what I packed. No problem, though the evaluator looked and listened with interest as I was explaining about ultralight gear, frameless backpacks, sleep systems et al.

The final half an hour I spent carving: 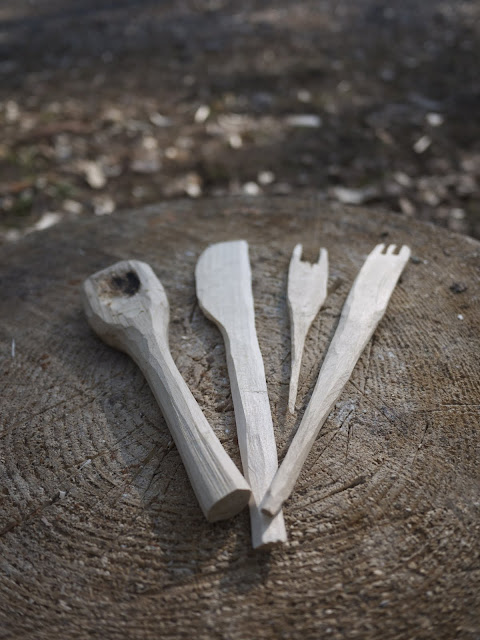 Not pretty but OK. Spoons are a pain if you don't have a lot of time or a curved knife.

That were all tasks done, and being the first one packed and ready I was also the first to go and have the personal talk with two of the evaluators. They asked me how I think it went, and after I briefly stated how it was in my opinion, they gave me feedback on the different tasks. Everything was very good to excellent, except my GPS failure. We then had a short talk about why I wasn't on the Bear Ski, and after we had sorted that we shook hands and I walked off, having passed the practical part of the Wilderness Guide examination. 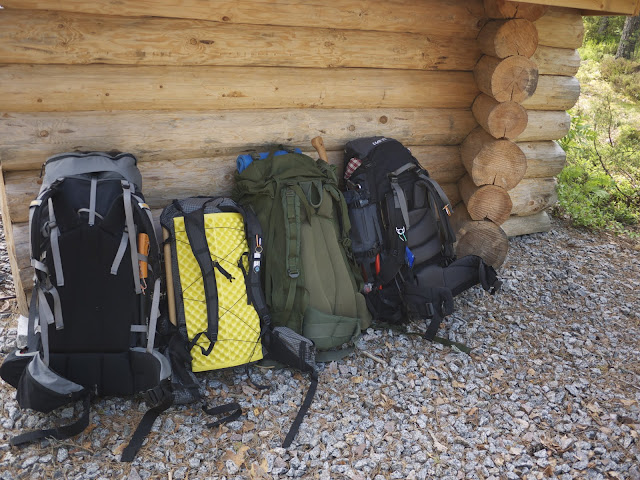