And we continue where we have left off. 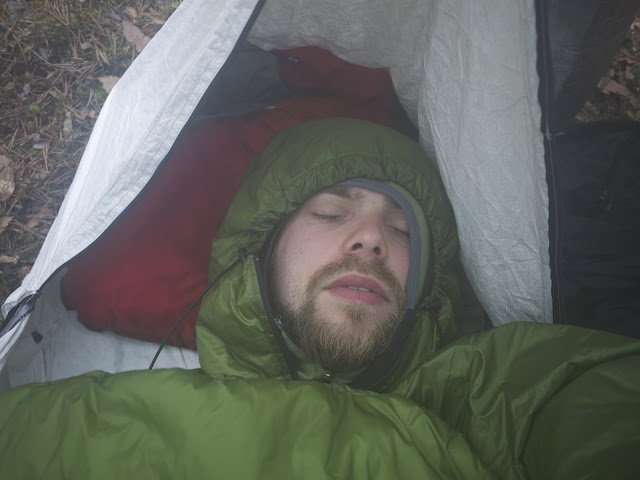 After a fine dinner & sauna I slept very well, being woken up too early for my taste. Nevertheless, boiling some water for my breakfast and coffee (Starbucks Via ftw!) and then we had a "Safety and Unexpected Situations" lecture by Petri. After explaining safety gear worn and carried Petri elected pairs of people and volunteers to act with him some unexpected situations. 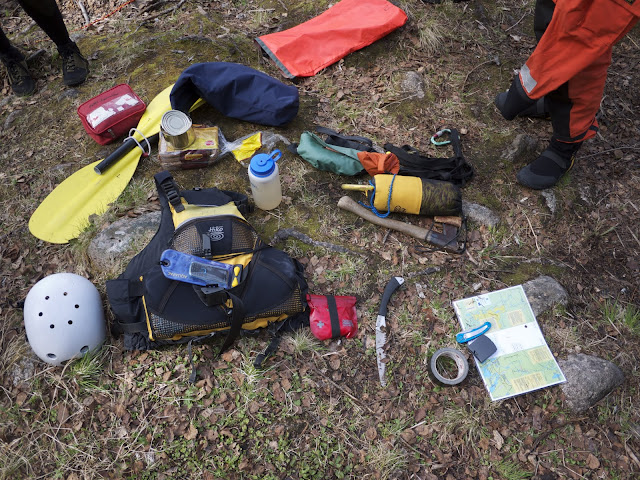 Petri's safety gear - hover over the image to get specific information.

Unexpected situations usually included capsizing in kayak and canoe in varying variations - from poling up a stream, to being a novice paddler, to having a heart attack, to being drunk (the most likely thing to happen in my experience, Finns get utterly wasted when paddling/ boating). I was with my Russian mate as a rescuer, our situation being that Petri and his partner capsized while Petri also acted to have a heart attack and being unconscious. We decided to first rescue the conscious person and then get the unconscious one into the canoe and start CPR. Now getting a unconscious person into a canoe is quite a task and I had quite a job cut out for me getting Petri in, and doing CPR in a canoe also belongs to the kind of stuff I hope I will never have to do.

There's no right and wrong in those situations, but the general opinion after our rescue was to go first for the unconscious person and then rescue the conscious person. We decided to go the other way, as it would mean at least one sure survivor. Of course it does make sense to me, in hindsight, that we could have first rescued the unconscious, do CPR and call for help while still being able to rescue person number two without running danger of him becoming hypothermic or similar. 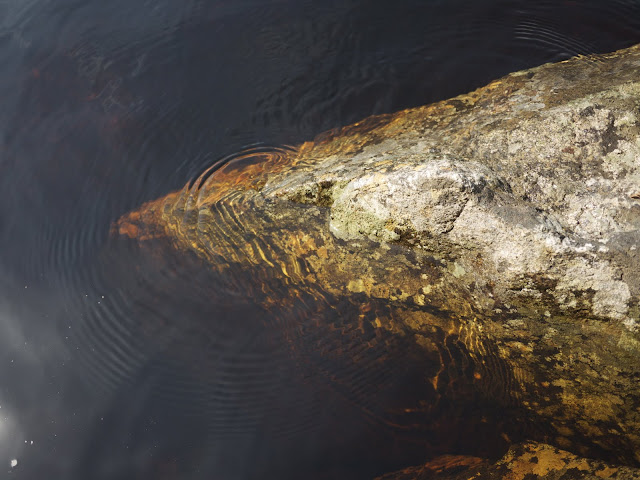 After the lessons some people headed to the sauna, and after lunch we packed up and continued just a few kilometers downstream, until Aittokoski, another Class II rapid. We got out at the top and went scouting, it was a pretty straight run of 400 m with 4,4 m in fall, with some big rocks at the beginning. In a canoe with my partner we did it without a problem, a fine run. Right after the rapid there's a eddy with a little sand beach, perfect for landing - even more perfect as this is where we would stay for the night!

A big double laavu with a fire place inside, a fine fire place with a bench for preparing food outside, and some very fine reindeer moss and other lichen & mosses not too far off, this seemed a fine spot. Add in that the portage back up is easy and short, and some of my classmates took the kayaks and tried the rapids a few more times. I went about setting up camp, inflating the Alpaca, getting the mind set on the task ahead and recruited a photographer. 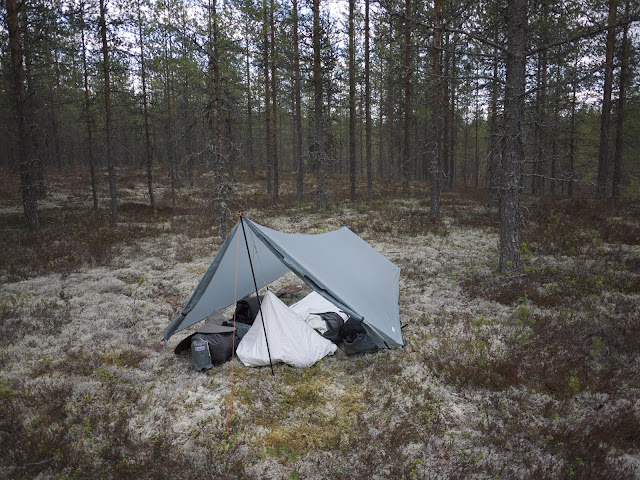 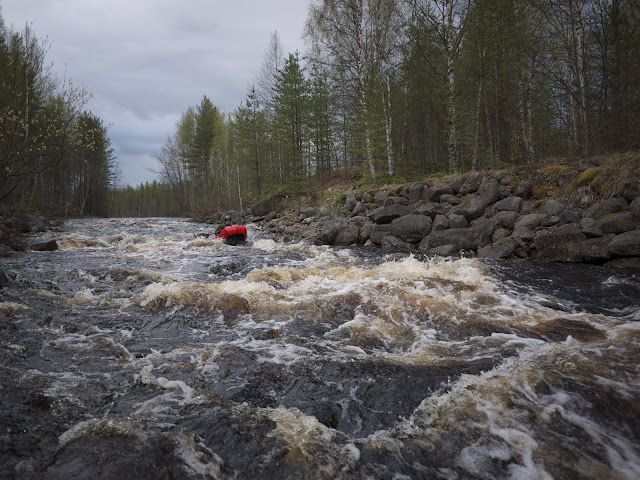 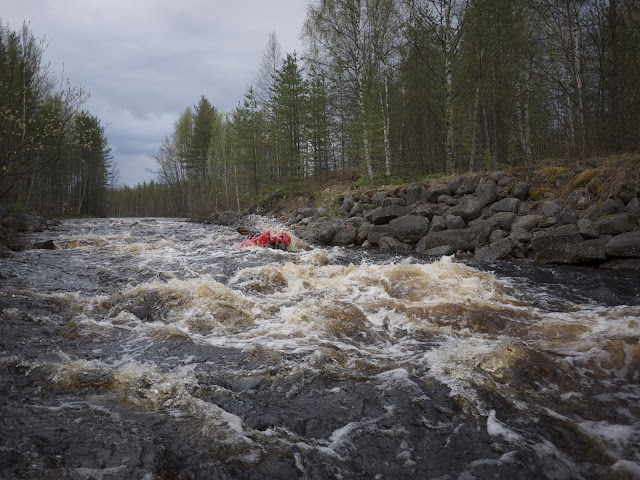 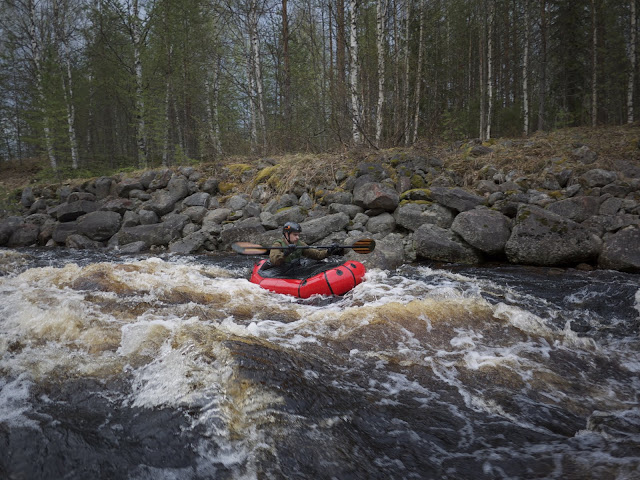 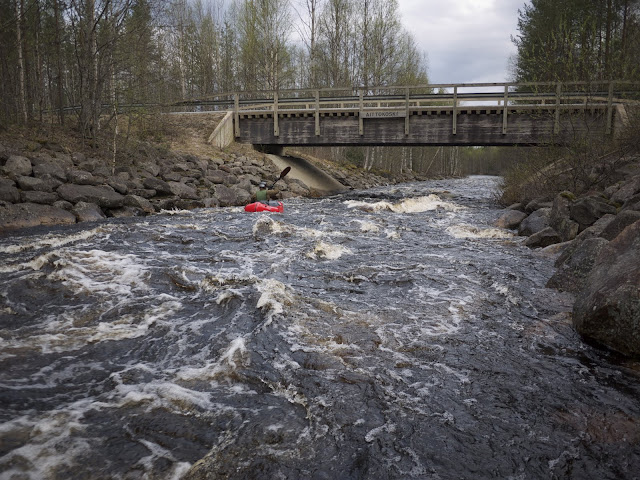 From the left site... 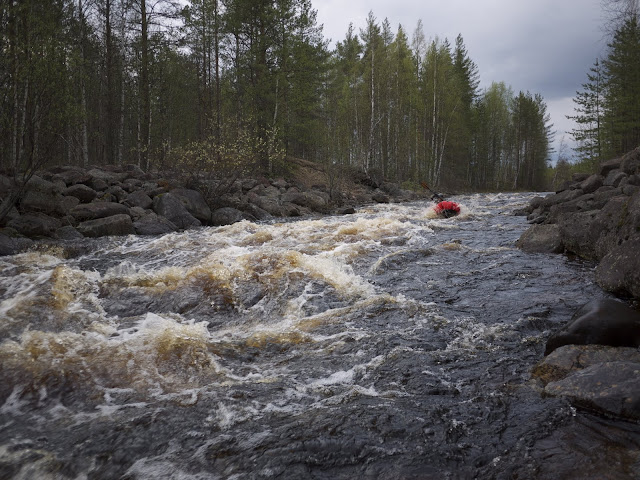 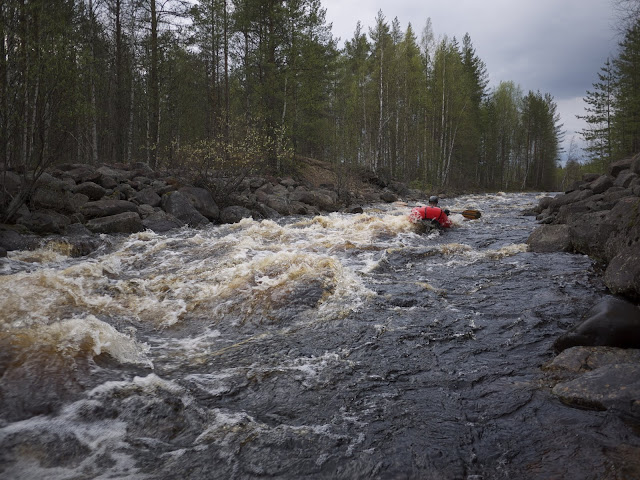 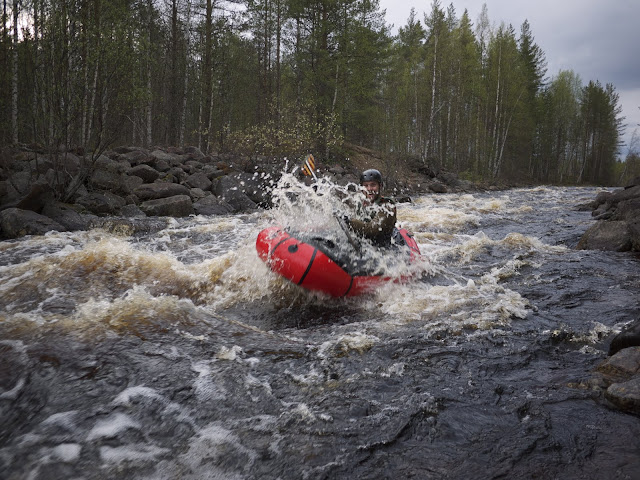 And the right site. Thanks to my mate Stu Campbell for the fine photos!

After running the rapid twice in my packraft it was time for the evening get together and talk about the day. Sitting outside around the fire we are discussing, while in our back a massive black cloud is pulling up. Petri finishes with a "... and we had great weather!" as a massive thunder cracks through the sky right above us, and a blinding lightning strikes not far away. Seconds later first hail, then big drops of rain are pounding down on us, and the meeting is postponed while everyone runs off to secure their shelters.

A howling wind blows from the west, and rips three shelters out of the ground while it shreds one 3x3 tarp at the seams and renders it useless. I had my wet gear up for drying and my SpinnShelter pitched high, which I quickly corrected with the rain and wind making it not too easy. As I think I'm done my Alpaca, which I left drying against a tree, is picked up by the wind and jumps through the forest, me chasing it =) Securely lashed around a tree and deflating it, I check once more pegs before I head back to the double laavu. 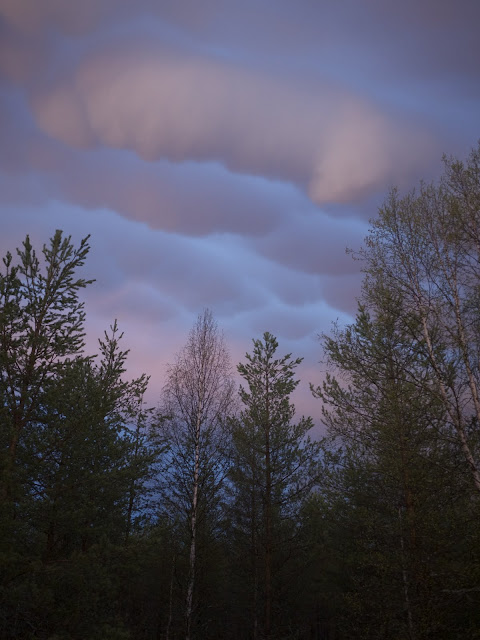 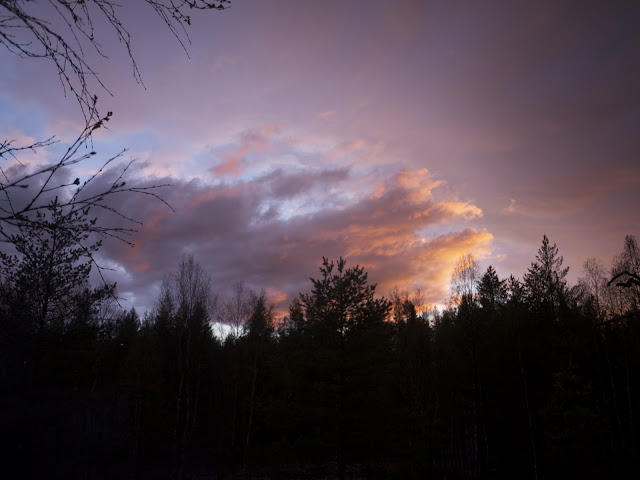 And as soon as it started it was over, leaving us with a fine display of clouds and a rainbow. The meeting commences for a second time, and concludes with a few games being played. 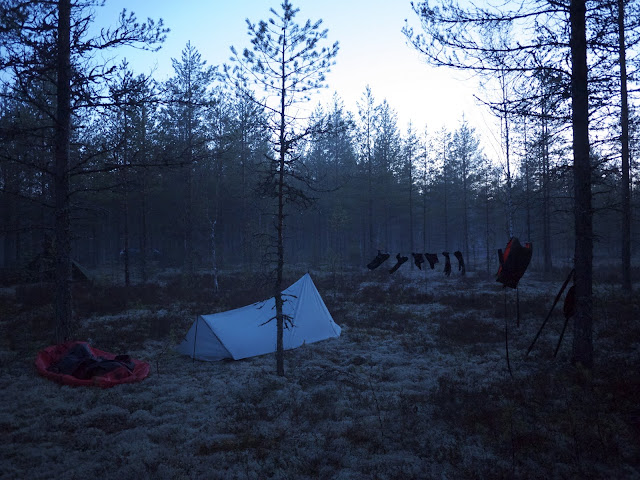 After the storm went over, gear is put back up for drying. 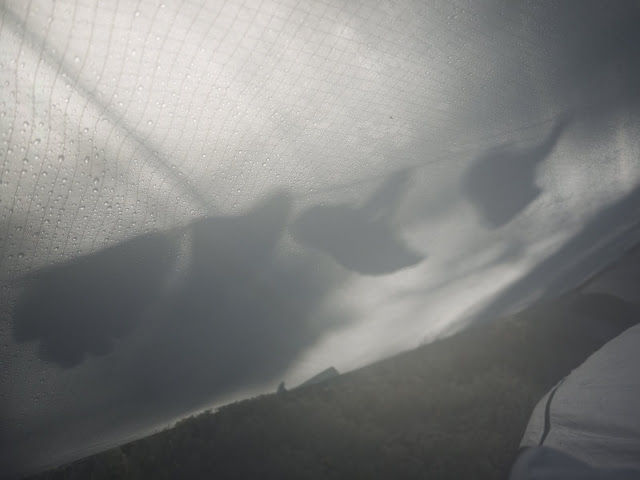 Sunshine is a fine thing to take up to.

Waking up to sunshine isn't difficult in summer in Finland. It actually is more difficult to sleep without being woken up by the sun - it going down around 23 o'clock and popping back up at the horizon around 2-ish means you wanna look for a bit of a shady camping spot. Breakfast, breaking camp, packing the vessels and getting into the paddling mindset are the tasks of the morning, and before nine we start off. 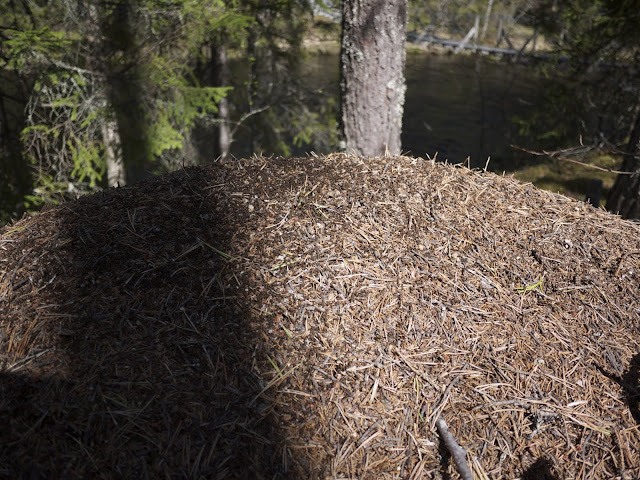 Today was my first full day paddling in a kayak - the previous days on the river I was in a canoe. At first I was a bit skeptical - we had to cover some 26 km, and in a kayak you're paddling alone while in a canoe you got someone to help out. Well, we covered 20 km to the lunch place in about 3,5 hours and I didn't even break a sweat, so my worries were unfounded - it was a lot easier as I thought. With hindsight it is obvious, the kayaks we used being Seakayaks and having a very long keel while having less surface than the canoes. However, going down rapids in the Seakayaks, be it Class I or II, I could care less for. Personally I find it not interesting, it is just annoying that you get massive loads of water on your spraydeck while maneuvering in them, in the rapids, is a tad awkward. Anyway.

After lunch we continued at a leisurely pace the remaining six kilometers and arrived very early at our third camping spot, Laklajoen taukopaikka just a short walk underneath some Class II rapids. Instead of some more packrafting I decided to check out the surroundings on foot, after having set up camp. The Karhunpolku goes through the area, a very fine looking trail, and I followed it for a while to a nearby spring, where I refilled my hydration bladder and headed back. It was dinner and evening meeting time =) 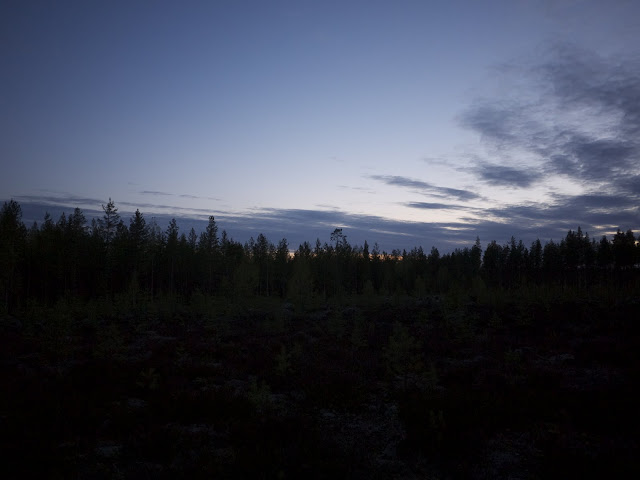 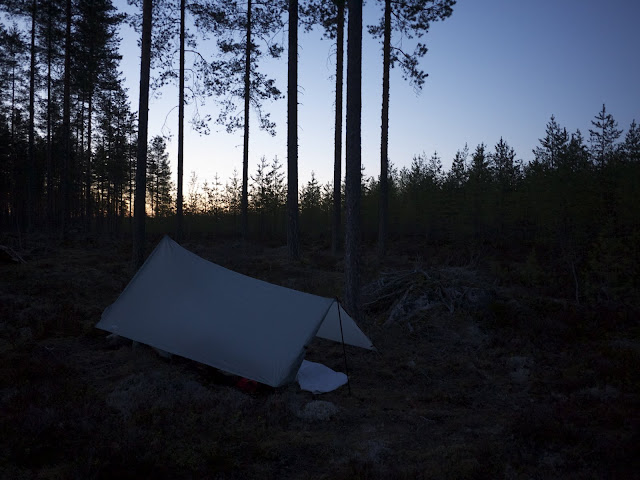 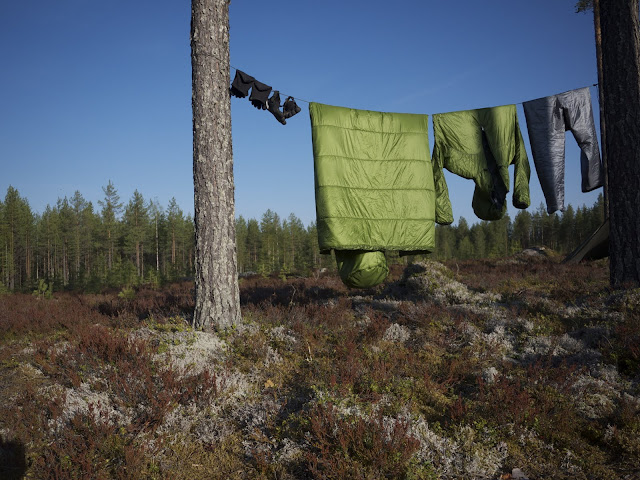 Drying gear the next morning.

Another great night's sleep, it was nice to wake up to splendid sunshine and warm temperatures. A short day of paddling was waiting, before we would head off to Ruunaa for more paddling. But first breakfast, packing, loading the canoe... The morning's paddling was uneventful, the major rapids on the river where behind us, with mostly flat water without much current and the rare Class I rapid before us. We had a final lunch before the remaining Class II rapid of Viitakoski before running it, and were passed by a group of amateur paddlers. Curious as we are, we walked up to the bridge to see how they'd paddle the rapid. It was quite a miracle that none of them capsized, as they didn't even know how to hold a paddle correctly, nevermind to keep it on one side or which strokes to use with it. We made it down Viitakoski with proper paddling, and then landed and started to load the gear for the trip to the Ruunaa river. 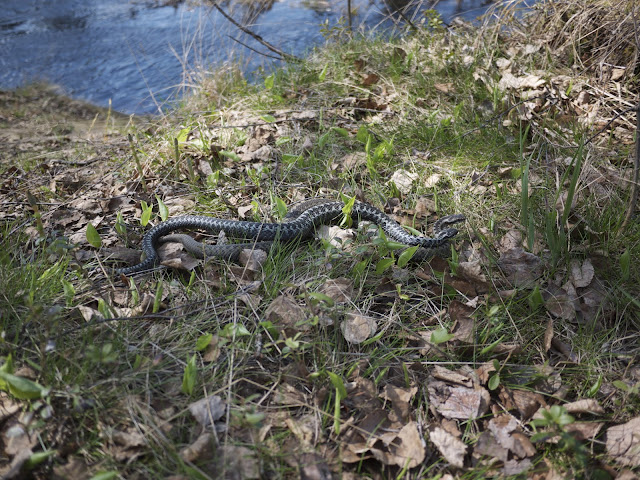 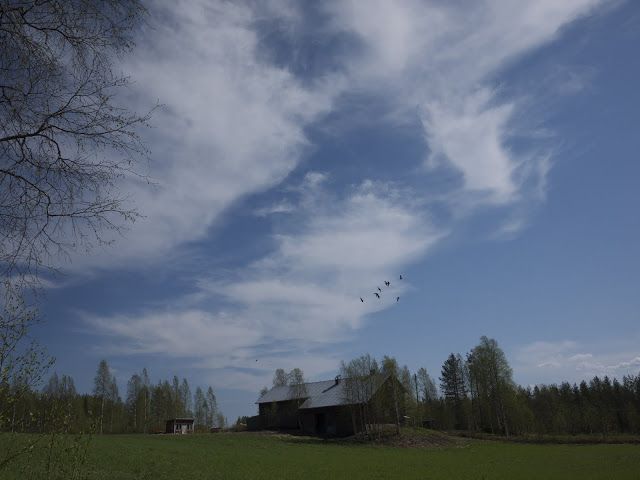 Adders in love and a small group of cranes.