My bike has given me the evil eye lately. It’s not that it doesn’t get used - it gets used daily on my commute to our house that I’m renovating, grocery shopping, and some fitness rides - but that it doesn’t get used enough on the singletrack trails and backend roads that it was made for. So when the three family dads of this story finally found a few free days where everyone was exempt from work and family duties, and my bike heard about it, she started to give me less trouble. 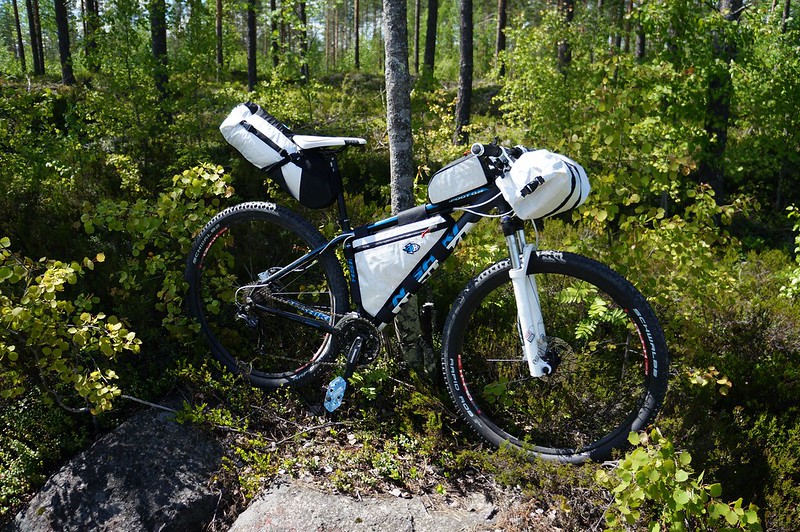 To celebrate the occasion of the first bikepacking trip, I took her to the mechanic who fixed her bent rear derailleur, and as a surprise there was a full set of white XPac Porcelain Rocket frambags waiting for her to be dressed up with. After that she was so happy, that the daily commute on asphalt didn’t bother her anymore - soon she’d be joined by two fine bikes on the trails and roads of Pirkanmaa, and she was eager for it.

Toni and Peter life in Turku, while I now hail from Vaasa, so we decided to meet in Pirkanmaa, which is fairly in the middle of us three. Parkano with its railway station close to the Pirkan Taival trail was made the starting point, and after an uneventful trip for me, I was before noon there. Checking Twitter, I had a few messages from Toni and Peter that VR managed to fuck up again (they call it technical problems, I call it running a business very inefficiently) and that they’d be late. Swell. I sat down to make lunch and a hot drink, after which a short phone call with Peter confirmed that they’d be here at around 15.45. Happily there was an electricity outlet to keep the iPhone charged, and I also had a good book with me to keep me entertained. 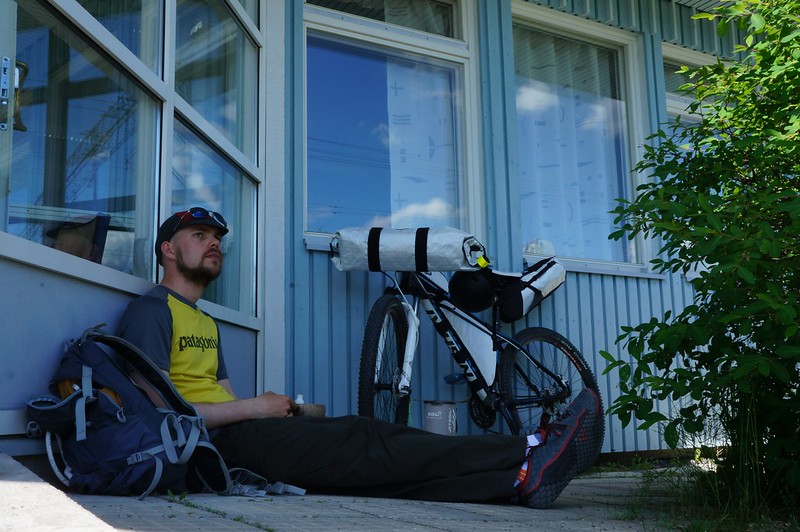 VR managed to deliver Toni and Peter with bikes on time to Parkano, and while we had a brief chat about route, tire pressure and general chit chat, our bikes sniffed each others rear wheels, much like dogs do. Toni came, much to my pleasure, with his 9:Zero:7 fatbike, which is something to be seen in Person to understand how awesome these are. I also quickly saw that Toni and I are about the same height, so a test ride on his bike later on should be possible. Peter came on his Salsa Fargo, which looked like a sweet ride, too - but Peter being rather tall, a test ride would be out of the question. But the bikes were happy and ready, and so we set off.

Into a Military Zone. While checking smartphones and maps, a officer drove up, and inquired what we were up to. After taking our social security numbers and names, he led us to the “right” road - the road I wanted to avoid, as I found it boring when I walked it the last time, but well, if it brings us to our goal, so be it.

We rode for one and a half hour before arriving at the Seitseminen Visitor Centre, which was open for another 30 minutes. Loading up on food and each of us buying a map, we sat there, enjoyed our hamburgers, coffee and cake, and decided how to go forward. A short consultation with the staff of the Visitor Centre confirmed that all trails are open for cyclists in the National Park, and that the especially marked cycling trails are just a bit wider. Swell news - Lets roll. 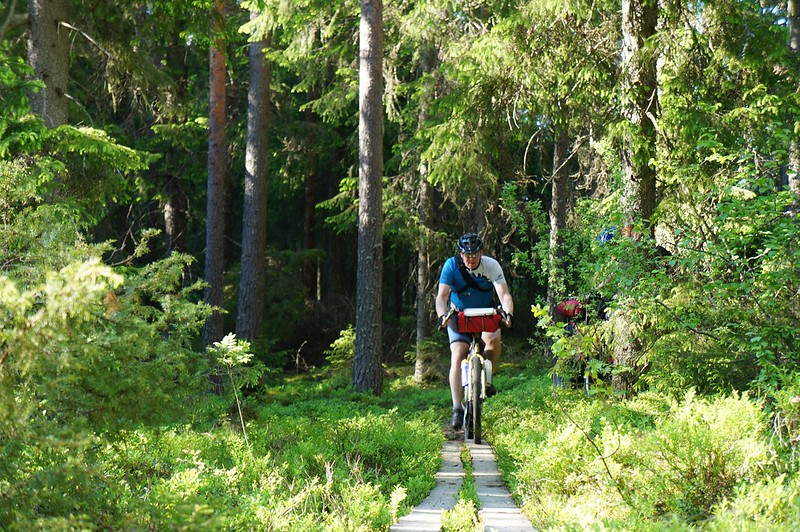 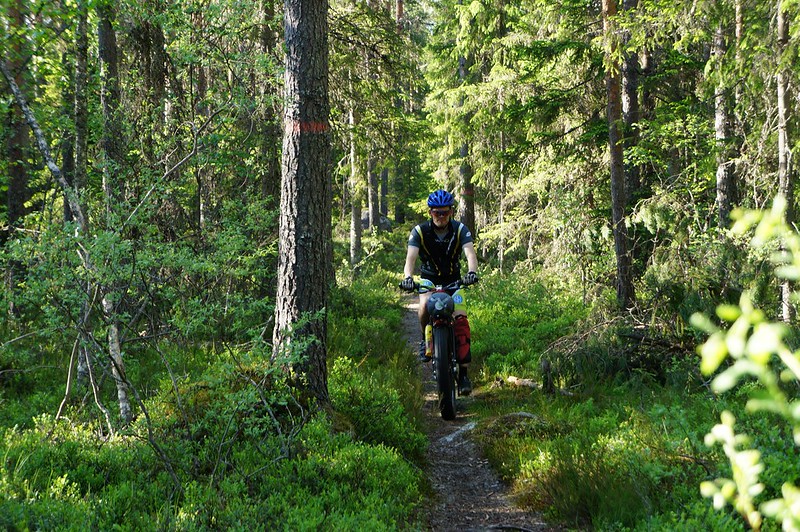 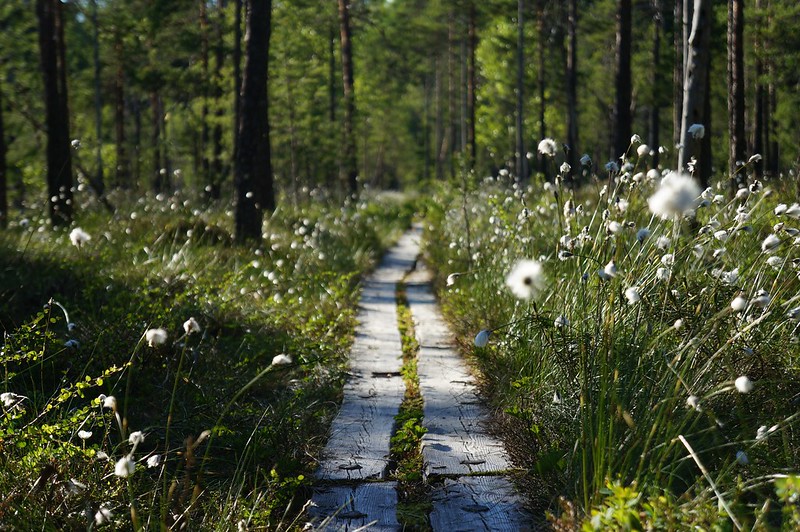 While I have ridden a bit on trails, it was nothing like this. This was, in the words of Toni & Peter - ‘Awesome singletrack’. While the two raced speedily over the trails and duckboards, yours truly and his steed took a bit slower, to gather up the skills and balls that it takes to ride down steep, rocky singletrack. We made good speed and drove, with plenty of little breaks, onwards to Kovero, the old croft in the National Park, where we rested for a bit. 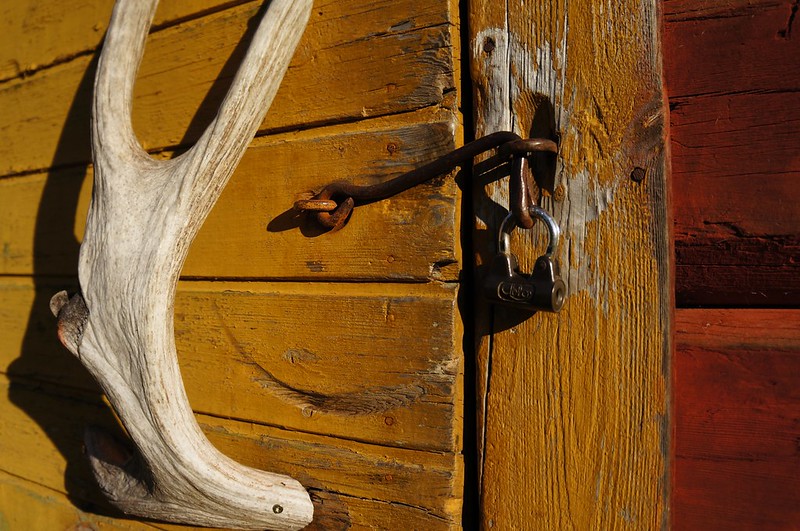 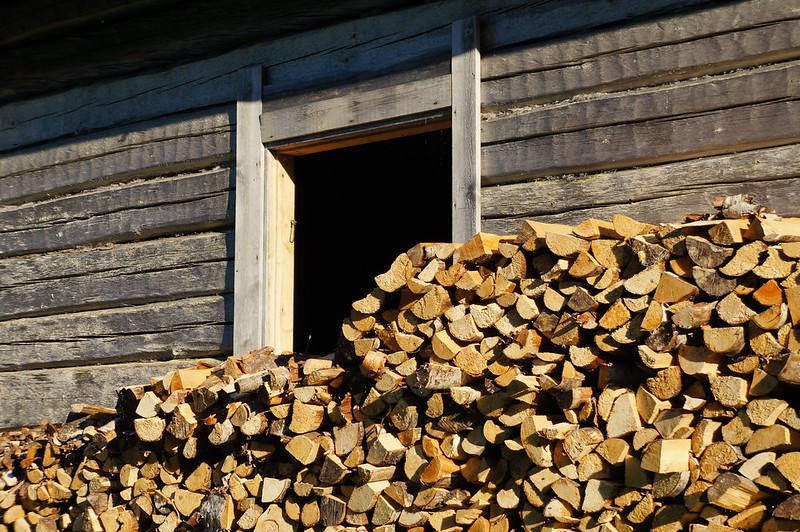 Then it went forward over forest roads towards our chosen campsite at Löyttöjärvi, with a short stretch of trail as a shortcut. It was a nice stretch, but it was getting late, and I felt my attention wane, and was happy as we reached the forest road. Just another hour and a half till we’d be there; happily my PR Top Tube Pack held a good amount and variety of chocolate bars - useful for quick energy, I just need to work on how to open them with one hand.

Arriving at camp, a fire needed starting; not because it was cold, but looking at an empty fire pit is just, hmm, not very interesting. Toni & Peter designated me to have the honour to start it, as I’m the professional =) A few minutes later, we were sitting on the bench, starring into the Wilderness TV, pondering what to do next. Ah ja, there was this thing with food. Gas stoves were brought up from the depth of frame packs, and quickly water was boiling, meals were hydrated & consumed.

On the Tuesday the same week I went to get a pad & some other kit from my in-laws, where I have my outdoor gear stored. Of course I managed to forget to take the pad among the other stuff I took, so all I had were six segments of a ZLite, which was really pushing it (in hindsight I should have brought ten, I had the space and segements) but I managed to find a comfortable spot for my bivy nevertheless. The weather was so good, and the sky clear, that I didn’t bother pitching my shelter, though the bug free environment which Peter had under his Double Rainbow would have been welcome. The sound of billions of mosquitos soon had me sleeping, though, even if a bit more distance between them and me would have been cool. 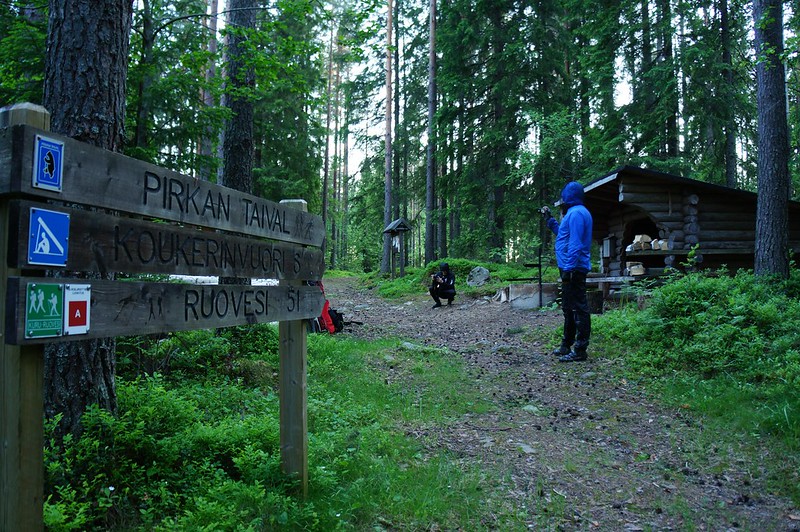 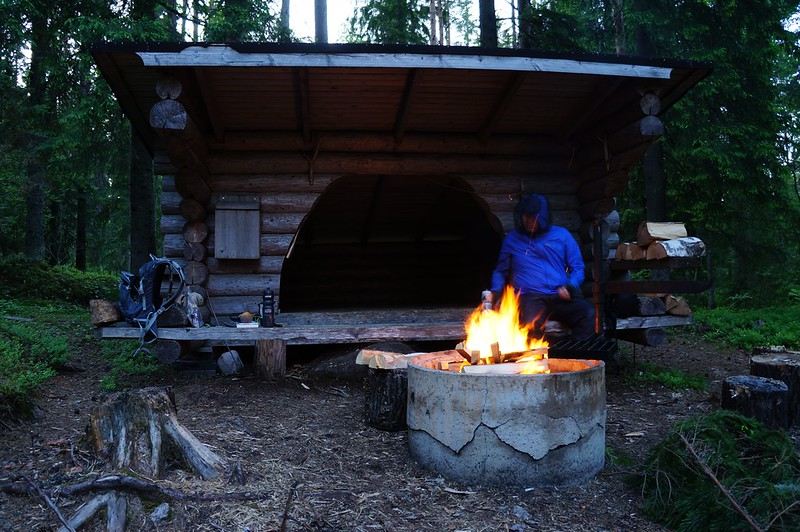 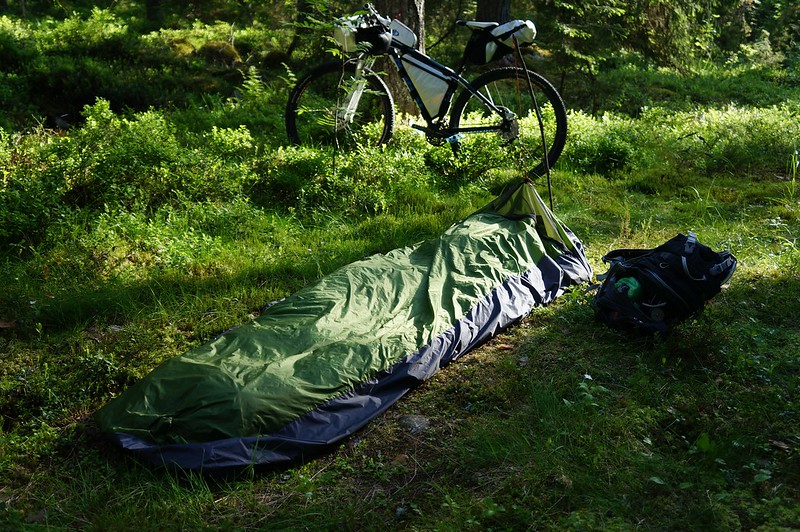 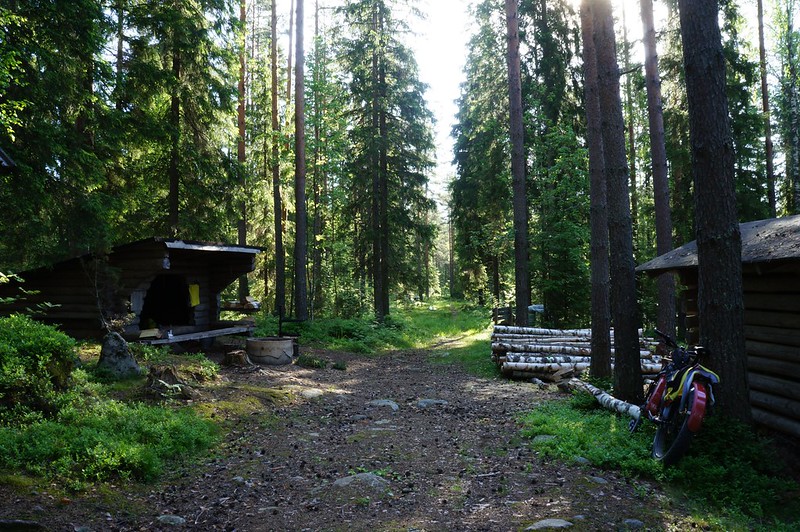 I woke up at 6.30 in the morning, and carefully rising to see if either of my companions were up already, which wasn’t the case, I lay down again and went back to sleep. 90 minutes later I saw Peter up, and despite the army of mosquitos hovering above me, I got out of the bivy and into my Arc’teryx Palisade pants and Rab Pulse jacket to keep them off. A cup of coffee was all we three had for breakfast, as the lack of water at the camping spot hindered us from going very fancy in terms of cooking. 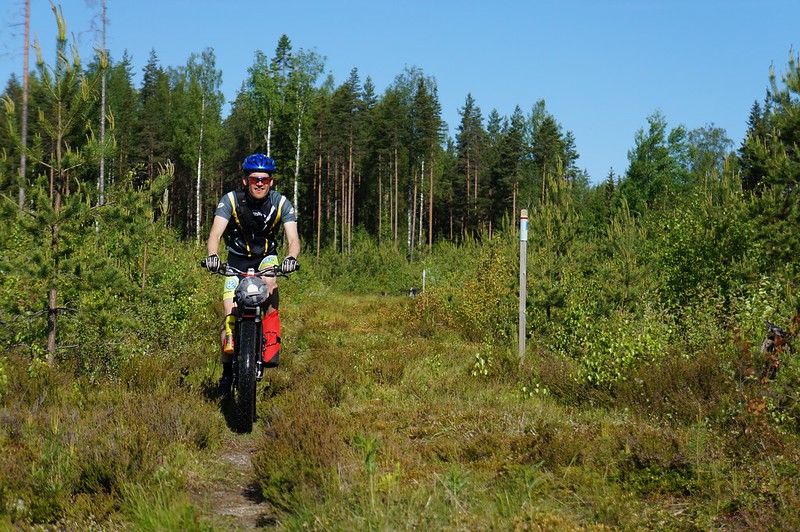 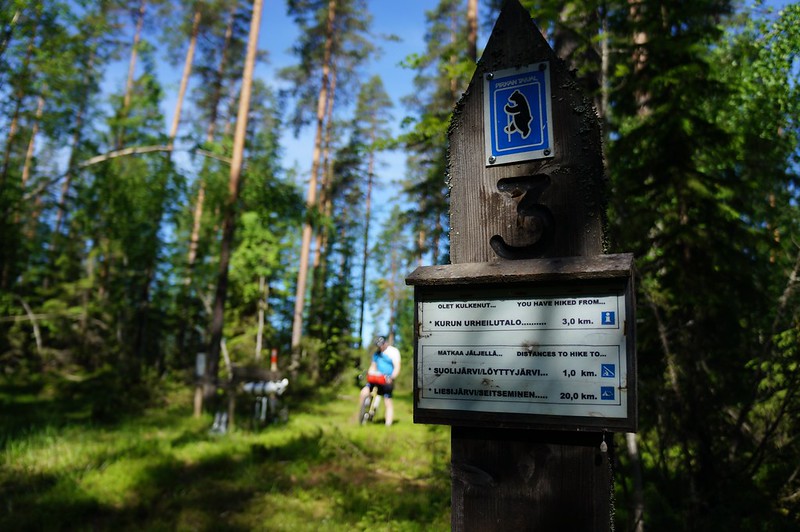 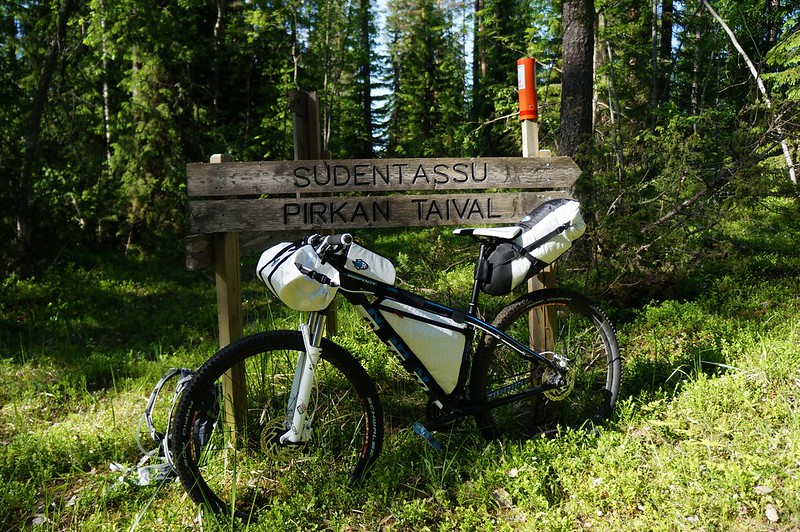 Some very fine singletrack brought us to my old school, where we tanked up on water. Peter and Toni found it too late for breakfast now, and so we rode on - until Toni stopped at the Kuru Hardware Store to find some screws for his fenders, which were misbehaving.

After riding out of Kuru on the street we soon took a turn and were on one of the silent backroads which criss-cross the Pirkanmaa. Rolling hills, partly over asphalt, mostly on grit, with less than five cars passing us on some 25 km - fine riding. Up, down, curves, straight, forest, fields, lakes, tiny villages, summer cottages, farms, more forest - this is Finland at its best, experienced in the best way.

We roll down a grit road to a jetty, where we have lunch. As I’m looking for a way to get water from the lake, I spot a nest - with two hatching eggs. Excited we snap a few photos before the parents return, and keep a save distance to not disturb them, or to agitate the parents. Meals are consumed, coffees drunk, dishes cleaned and we continue. The parents return to the nest as we leave, surely happy that these intrudes were more interested in their own food than their offspring. 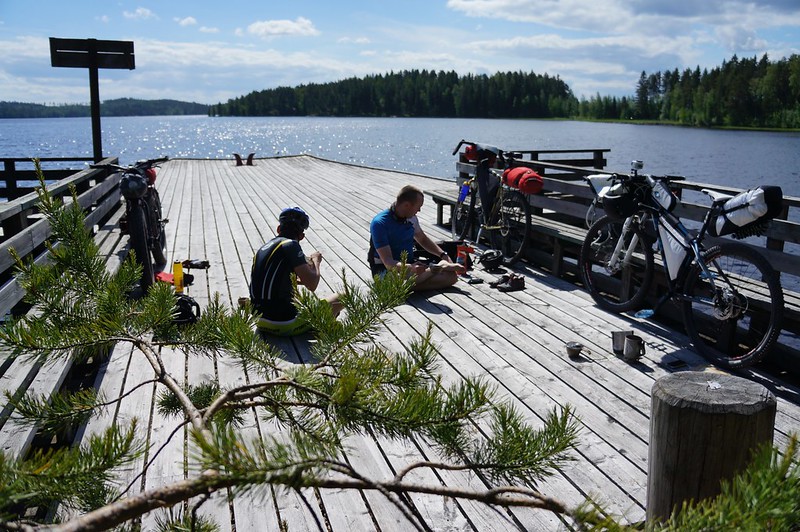 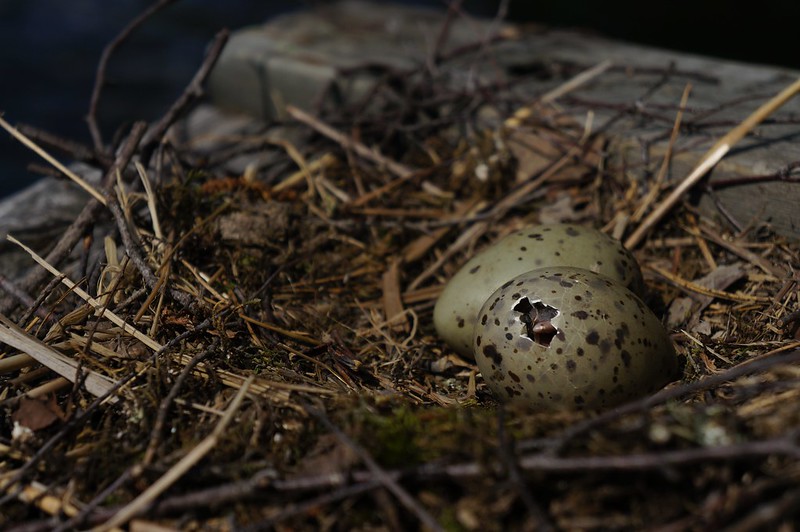 We continue over the same kind of fine roads for a dozen or so kilometers, and it is here that I try Toni’s fatbike. Wow, how much fun - and so fast! I thought it would be sluggish going on the asphalt, but it is quick and feels even faster than my own bike. We switch bikes again and continue, until we hit the highway. Before we join trucks and cars, we first have a quick stop at the Supermarket: Toni and Peter to have an ice cream, me to restock on chocolate bars and some juice. Then, on the side of the road we cycle onwards, the trucks and cars rushing passed us, but always trying to stay as far away as possible from us. Nevertheless, really comfortable I don’t feel here, and am happy as we turn on the old highway, which sees a lot less traffic - and after some ten kilometers or so even has a cycling path going till Tampere! 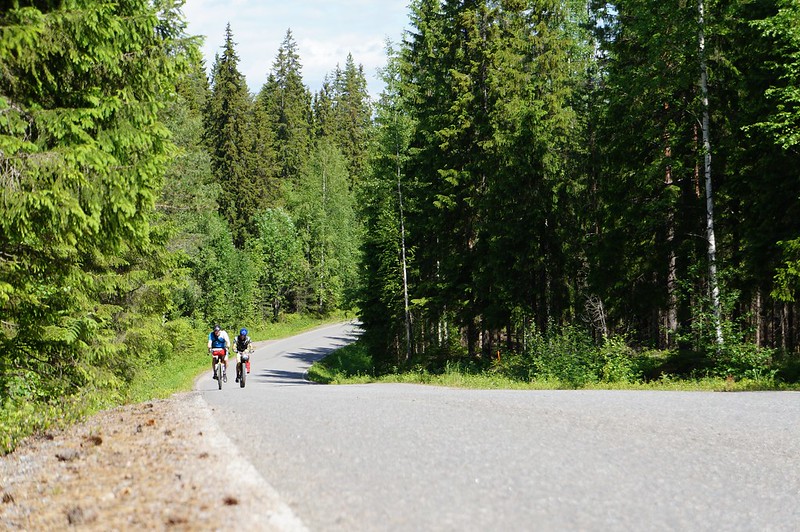 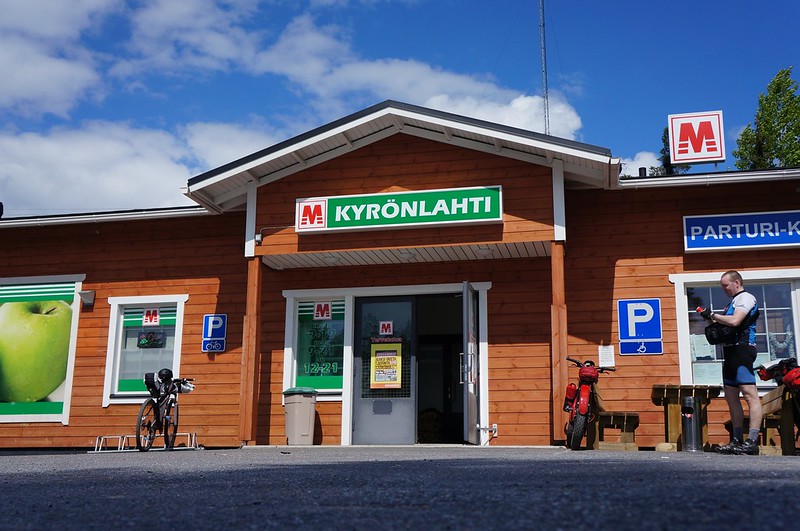 We roll into Tampere at pretty much four o’clock in the afternoon, the sun high in the sky. Peter had some problems with his bike, so I show him R-Tech Suspension, Tampere’s finest bike shop, where his bike was fixed quickly while we sat and ate - first some sandwiches, then some more ice cream.

And so it ends. I head in time to the Railway Station to catch my train back to Vaasa, while Toni and Peter continued to explore the south of Tampere. You definitely should read and see their account of the trip, by the way: Peter, Toni and More of my photos.

Lessons learned? It is hard to put into words or photos the immense fun this trip was. We covered 135 km in about 24 hours, 55 km on Thursday, and 80 km on Friday - I didn’t even think I’d be capable of riding that far, and am sure that without Peter & Toni wouldn’t even have tried - it is great if someone pushes you over your boundaries.

Riding singletrack like the one in Seitseminen with a full bikepacking setup also was a first for me, and lots of fun - duck boards seem challenging, but once you realize that you can do it, it is no problem and good, adrenaline-infusing fun. As is going downhill and fast on curvy forest paths.

Ultralight backpacking gives you the gear and skills to try bikepacking. Yes, you need some additional storage options (and let me tell ya, my Porcelain Rocket frame packs are the sexiest pieces of gear I’ve got in a looooong time), and here you can either use what you have and do some MYOG goodies, or go down the custom-made route. Though in terms of camping gear you are very well equipped already, and your small, light and compact kit makes a perfect setup for bikepacking.

Photo wise I think Toni and Peter had an interesting setup - both used a LowePro Slingshot which allowed them to have the camera really quickly in their hands, additionally Peter used a point-and-shoot to take photos while riding. I think you can easily see that they have more experience in this discipline than me, and if you want to see some photos of my riding you need to check out their posts =) I on the other hand set on hydration and had a Osprey Raptor 18 on my back, which also carried my camera - but it wasn’t as quick and accessible as Peter & Toni’s setup. I’m pondering if a small point and shoot would be useful for taking photos while riding, and using the Sony NEX-5N when I stop.

Anyway. I’m hooked. Negotiations are on-going to broker for more free time for bikepacking trips, possibly with the additional use of something inflatable to be used with a paddle. And a re-run of this trip is in the planning for the autumn. Same cast, other bikes, same fun. Thank you Toni and Peter, looking forward to ride again soon!