Somtimes trips don’t go according to plan. That’s especially annoying if you don’t get to go on as much trips as you’d like to, and try to make each trip count. While I didn’t put myself under any stress to make this trip a success, outside influences made this 24 trip a lot shorter. A trip report, sort of. 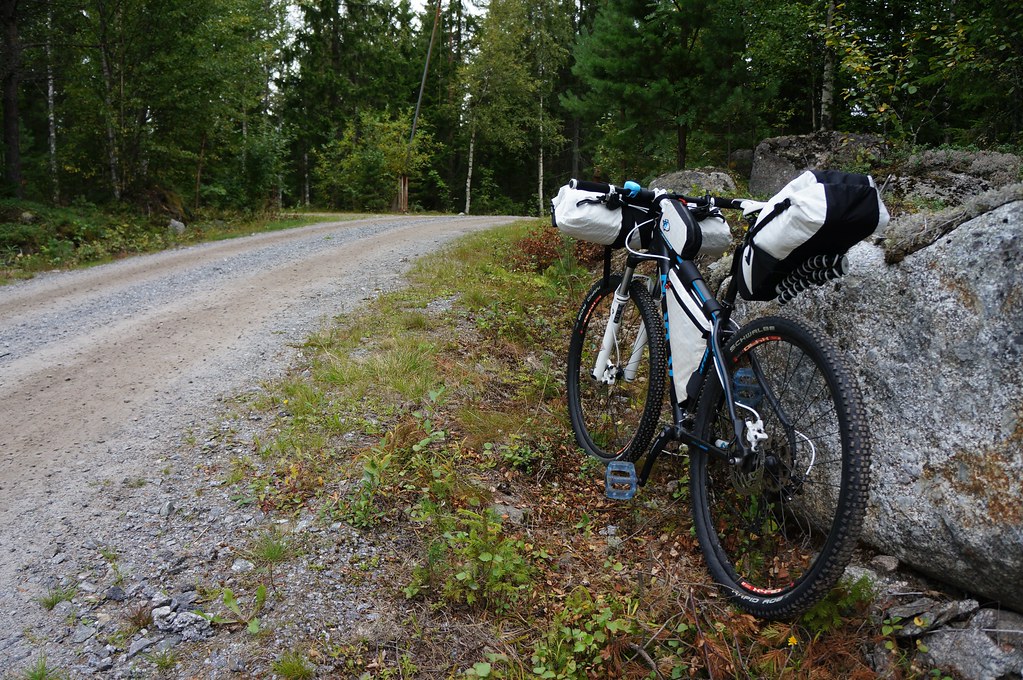 Remember when 24 trips were all the rage? That’d be about two years ago, when Ryan Jordan coined the 24 term for overnighters. He wrote a few superb trip reports and thoughts on 24 trips, and many took up the idea of these short trips, which didn’t need days of planning, but you just grab your kit, food, a map and go to the trail head, hike for a few hours, pitch and spend a fine night outside, before heading back the next morning. The idea is still as great as back then, because just getting away for a few hours, going outdoors, can be enough to recharge your batteries for normal life. 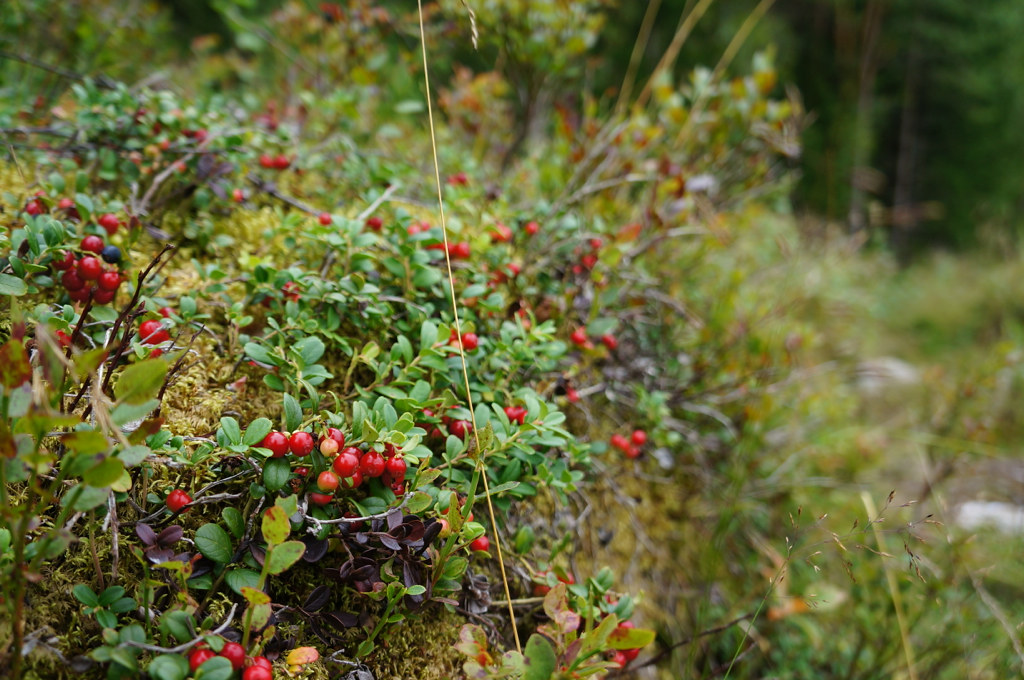 With an eleven month old baby son and a house renovation which we mightly underestimated, I was delighted as my wife gave me an OK for an overnighter. “Be back before noon on Saturday, so we can get some Raspberries from the market.” was the only condition. Spending eight plus hours working on my house Monday to Friday for four months already is taxing, and going outdoors is for me a good way to recharge and get ready for more of it.

I visited the supermarket after few hours at work to grab some torillas and salami for lunch and snacking, as well as my new favourite trail snack, Honey Roasted Nuts. Back at home I went to pack my Porcelain Rocket frame packs, threw a 3 litre reservoir into my Osprey Raptor 18 and after my son was asleep, taking his afternoon nap, I kissed my wife good bye and went to dress up my bike in its fine garments. 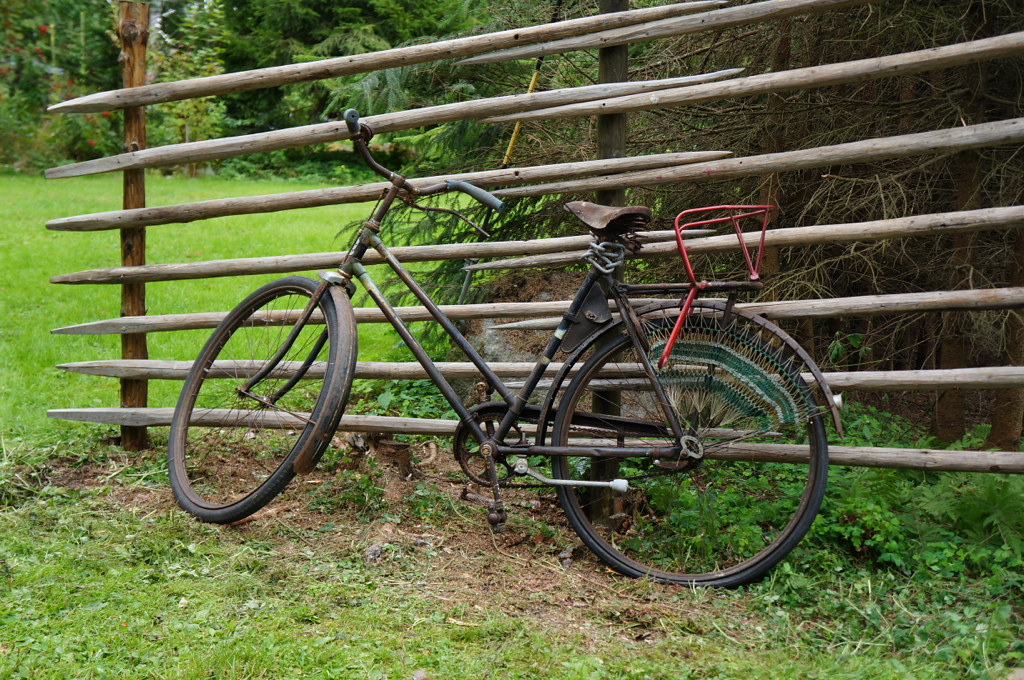 Where to go? I decided to visit the island of Köklot, part of the Kvarken Archipelago, Finland’s only UNESCO Natural World Heritage Site. I have visited the area in the past, and decided, that while riding to the main island which I have seen before, this little island on the site would be more interesting. A small beach, around 30 km from Vaasa, was were I planned to spend the night.

As riding on highways isn’t my favourite way to travel, I drove along backroads along the coast. Backroads in Finland are pretty good to cover distance, as you encounter minimum traffic. The scenery is dotted with summer cottages, though some are more like proper houses, and through the trees I glimpsed here and there the Baltic Sea. As I reached the end of the road I took a turn into the forest, where I found a trail which followed the power line. Along the trail, which was only just suited to riding, lingon berries and mushrooms were ripe for the taking. To my surprise, still a lot of mosquitos were around, and I made a happy mental note that it was smart that I took the mosquito headnet. 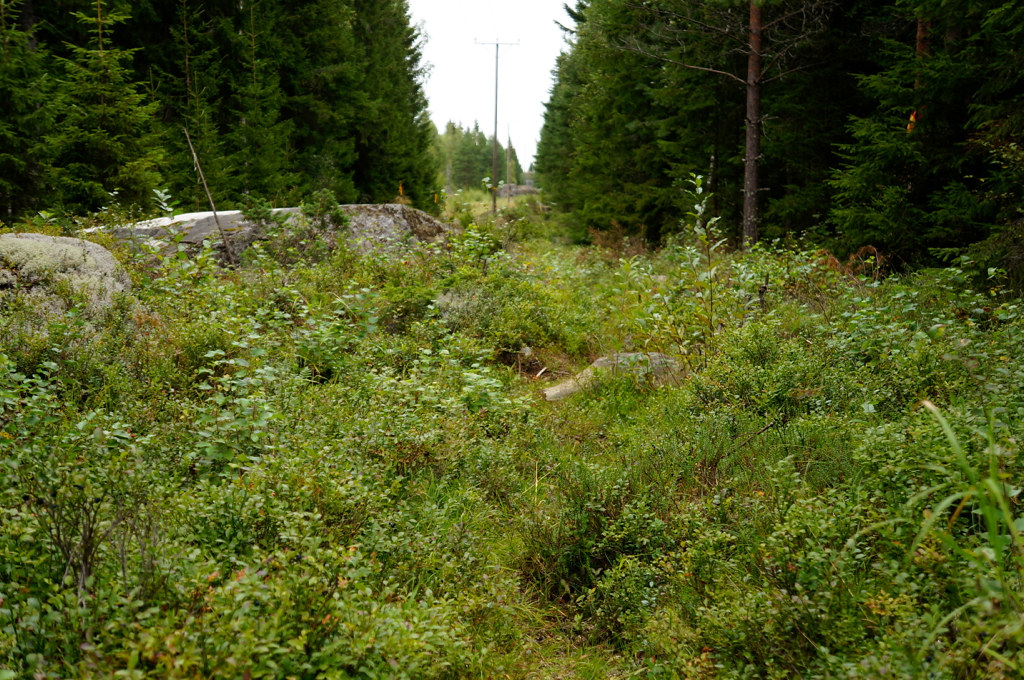 After a bit of bushwacking I finally reached the forest road I aimed for, and soon I was making good speed again. Then it didn’t take long to reach the highway, though fortunately I only needed to share the road a few hundred meters with the moronic car drivers, racing past me, until I made it to a cycle lane next to the street. From here it was smooth riding till the Raippaluoto bridge, Finland’s longest bridge. I drove a bit onto it, for the view, before I turned back. 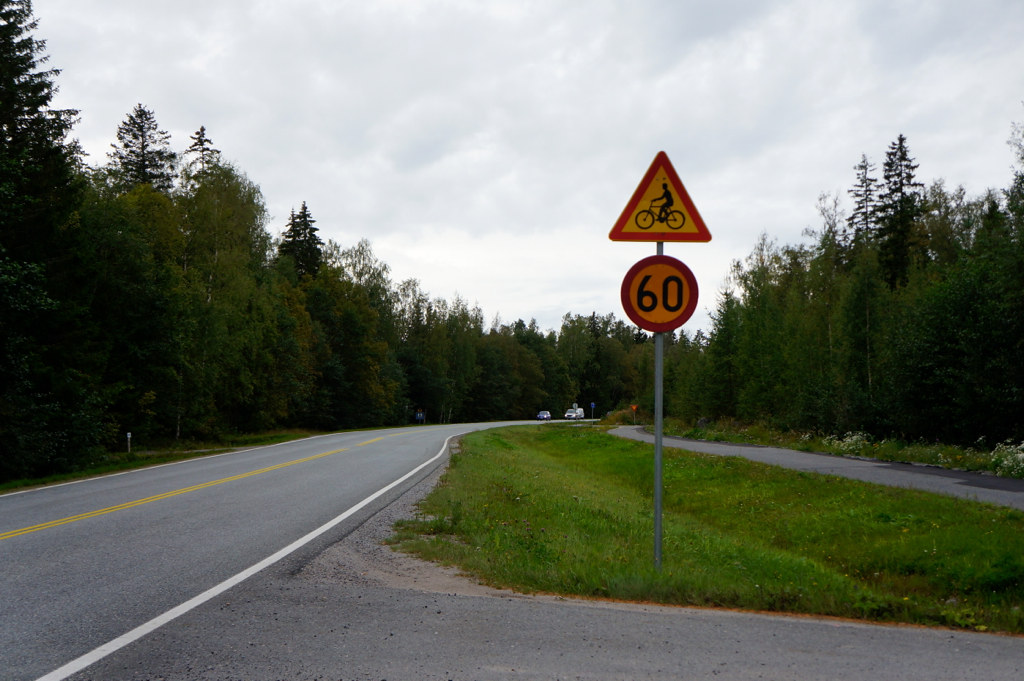 A small break at a rather well-equipped parking lot, where I picked some raspberries, followed. I was less than two hours on the road, and already covered some good distance. That the weather wasn’t very inspiring didn’t bother me too much, these various shades of grey had their own charme, and I was in good hopes that there would be a nice sunset and -rise to enjoy. 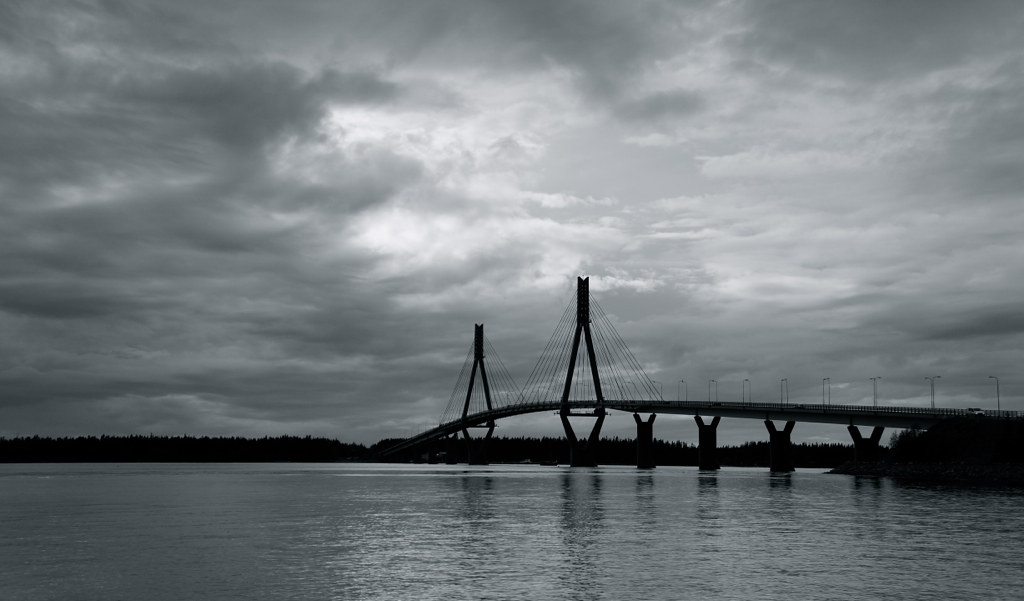 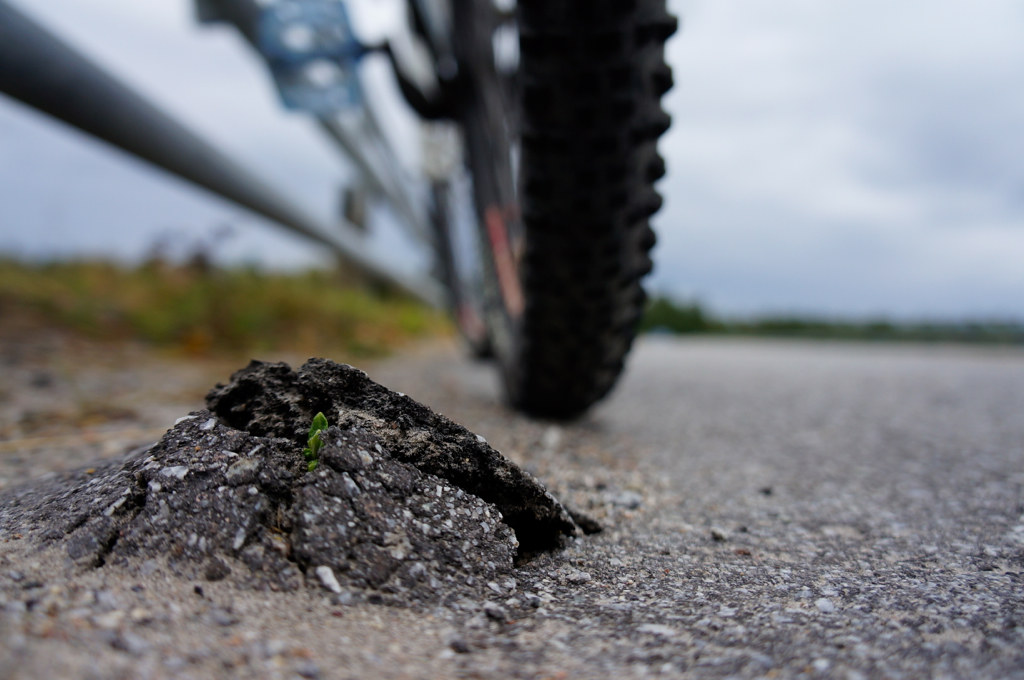 I cycled back to the road which would take me to Köklot. To my surprise there was a lot of traffic on it, and it being a side road the drivers seemed to even get more idiotic in terms of how fast they went. I was pondering what would be the most effective way to educate these lunatics in their cars, but ended up wondering if there are mobile EMP weapons which could take out cars in a radius of several hundred meters around me. That’d ensure that none but the oldest cars would go off coming close to me, and I would be safe from racing drivers [If someone needs an Alpha/ Beta Tester for EMP weapons for cyclists, I’m available]. 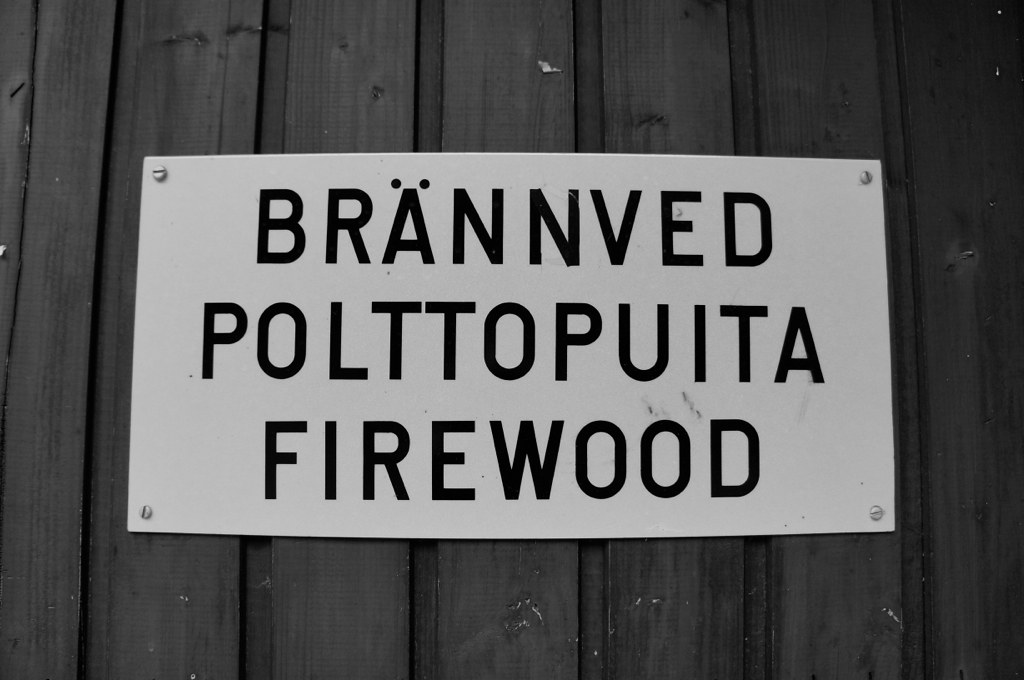 While the road was scenic, I was happy to reach the beach I aimed for. It was still plenty early, and it wouldn’t be dark till 22 o’clock. I drove down and was delighted to find such a fine beach all to myself, well, maybe it wasn’t such a surprise as it started to rain. I put on my Rab Pulse and took shelter at one of the dressing cabins, while putting my stove on to boil some water for a hot cup of cappuciono and dinner. The clouds were doing their thing in the sky, while I carved myself a spoon, which I left at home to safe weight. I was happy.

It’s a good trade-off to take a 42 gram knife instead of a 18 gram spoon -the knife is multi-purpose!

After dinner I decided to take a look at Köklot, the tiny settlement a few more kilometers down the road; conveniently the rain stopped, too. Also, while the beach was beautiful, it was a tad too close for my taste to the street and was facing south, which meant I might not see that sunrise I hoped for. Back on the street, all drivers finally seemed to have reached the places which they were in such a hurry to reach. 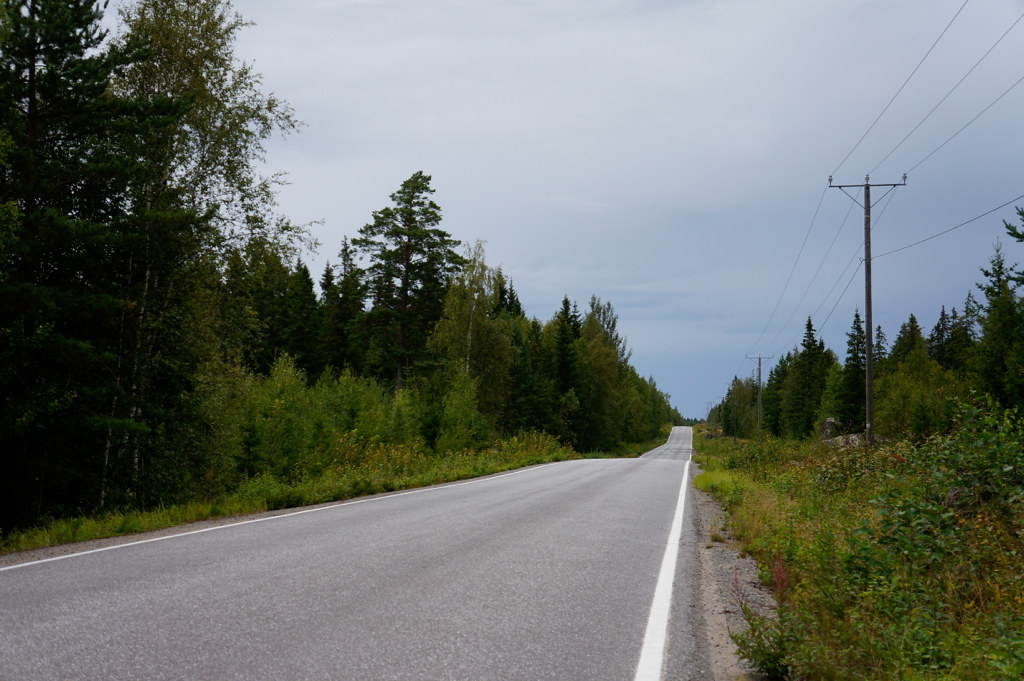 I passed a small fishing harbour, and a gorgeous sunset was on display at the horizon. Rain could be seen going north, and it was a pretty sight, with a few sailing boats out on the sea. I continued and drove into Köklot, where warm yellow light came through windows, but no one was to be seen on the street. Riding down a street brought me to an east facing shore, but all possible pitches were on someones land, so off limit.

I continued through the settlement for a bit, in the hope that there’d be some nice place somewhere close to the east-facing shore to pitch my tarp, but no luck. The sun now already set it was time to switch on my Knog Boomer USB lights just in case one of those drivers decided to go out again for a ride, and cycled the few kilometers back to the beach. 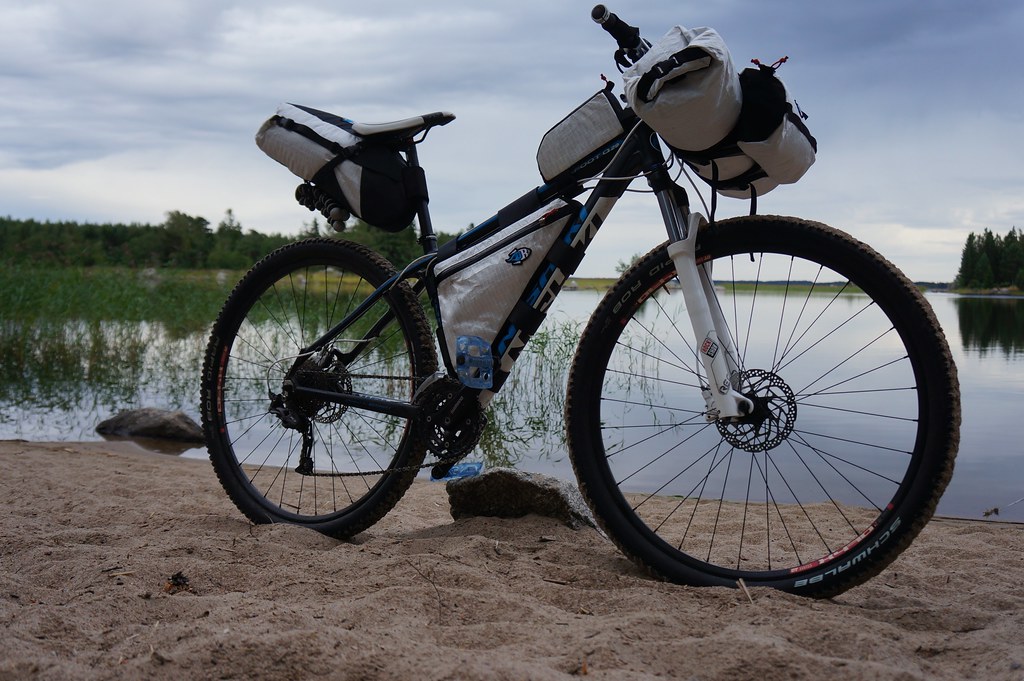 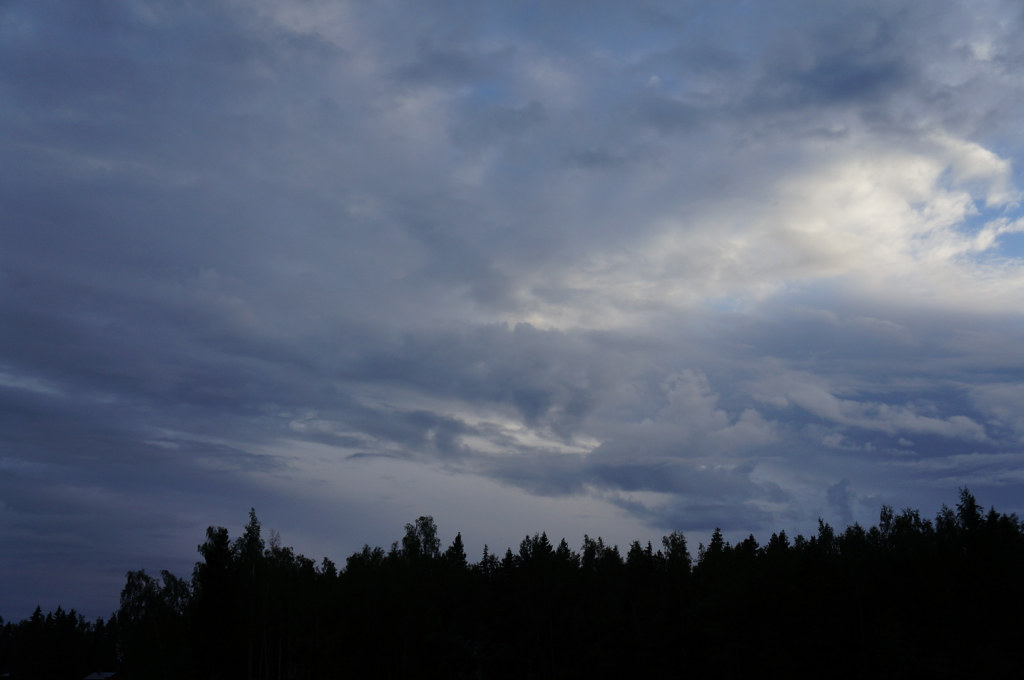 Back at the beach I looked for good spots to camp. Off into the forest I went, though between boulders large and small - these islands being created by the last ice age, they’re all rock - I didn’t find anything. Close to the beach there was a tiny patch of grass, just big enough, but it was at the end of the road, and I like my camps a tad more sheltered. On the sandy beach then I found one good spot. I put on my Mountain Hardwear Nitrous Down Jacket and started to unpack, as I heard some hubbub from the street.

Hmmm. I waited, and shortly after a guy with a reindeer skin and some booze appeared. He walked straight to the shore, where he stood still, looking out on the water. Engine noise appeared, and a boat entered the bay, riding up to the shore. Reindeer man jumped in, and off they went. Well, that was lucky, I thought.

Or not. I just got the tarp out of the handlebar pack when a car drove down to the shore. Well, swell. It was ten o’clock by now, I was ready for bed, but not with a bunch of people coming to party where I planned to camp. Somehow that possibility didn’t even cross my mind as I picked this beach as a camping spot, though in hindsight it was obvious that also others might find this Friday evening a good time to go partying at this beach, which was so conveniently close located to the street.

I packed up in the dusk, and headed back up to the street, leaving the party beach behind. I decided to look for a place to camp on the road back to Vaasa, but was not very optimistic. 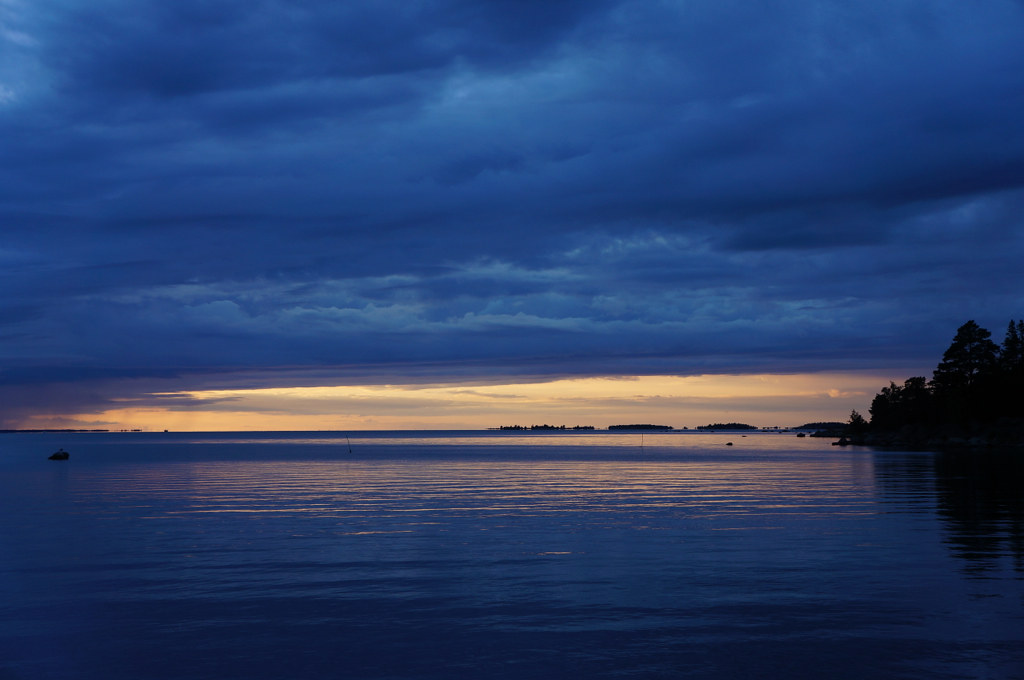 A few turns went of the main street which I drove up just a few hours earlier, but most were leading to summer cottages, which meant they were off limit. Those two that I went down were either un-safe - the noise of heavy forest machinery rang through the forest, explaining the deep tracks I drove through - or so hard and bumpy that even the NeoAir XTherm I brought would not be enough to give me a comfortable sleep. An hour and 15 km later I was back at the highway to Vaasa, and another hour and another 15 km later I was just a bit past midnight back at home. My 24 trip was just a bit over nine hours.

While I was a bit disappointed by not sleeping outside - I looked forward to the sound of rain on my tarp and the sunrise - it was a fine ride. I cycled some 70 km, saw some nice places, and was exploring my new surroundings. I also learned to not pick camp places which are too close to a street - something to remember on my next 24 trip, which is just around the corner!

Have you had failed trips? Tell us - what went wrong, and why? What lessons did you learn?