A new approach to OutDoor News posts this year, with a look at different categories instead of brands. Starting of with everyone’s favourite: Stoves! 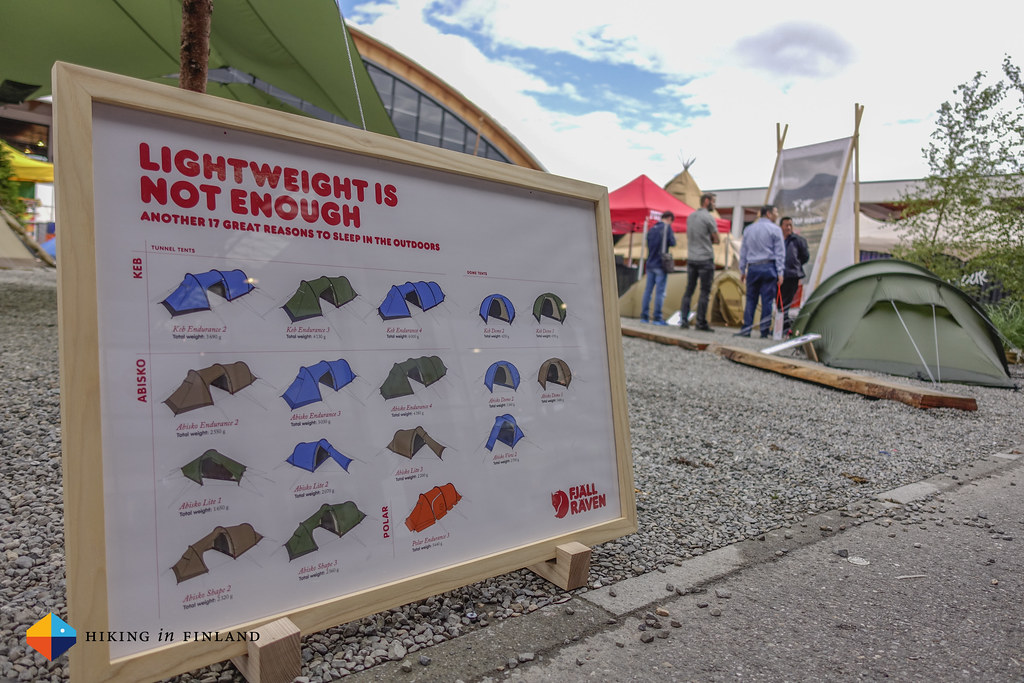 I didn’t find too many new stoves this year, which I blame on my severely limited time at the show to walk around and visit the different booths. But at least I managed to see and play with two stoves on the fair, of which I found the Jetboil MightyMo the more interesting one. At 95 g it certainly isn’t the lightest stove around, especially if you factor in an additional windscreen and pot, but if we look at the stove only we see it is actually a pretty powerful little thing. It packs 10.000 BTU which is around 3.000 Watt in case these matters to you, in practice it means you can boil water & melt snow at high altitude - although the reliable regulator is more responsible for that. It has a Piezo ignition which is comfortable and nice in use, and the output can be finely adjusted allowing you to simmer, cook or just boil. It is compatible with the Jetboil FluxRing pans and pots which have heat exchangers and works well with them. The MightyMo should retail in Europe for 59€ next year, while US Americans already will be able to buy it in the autumn. 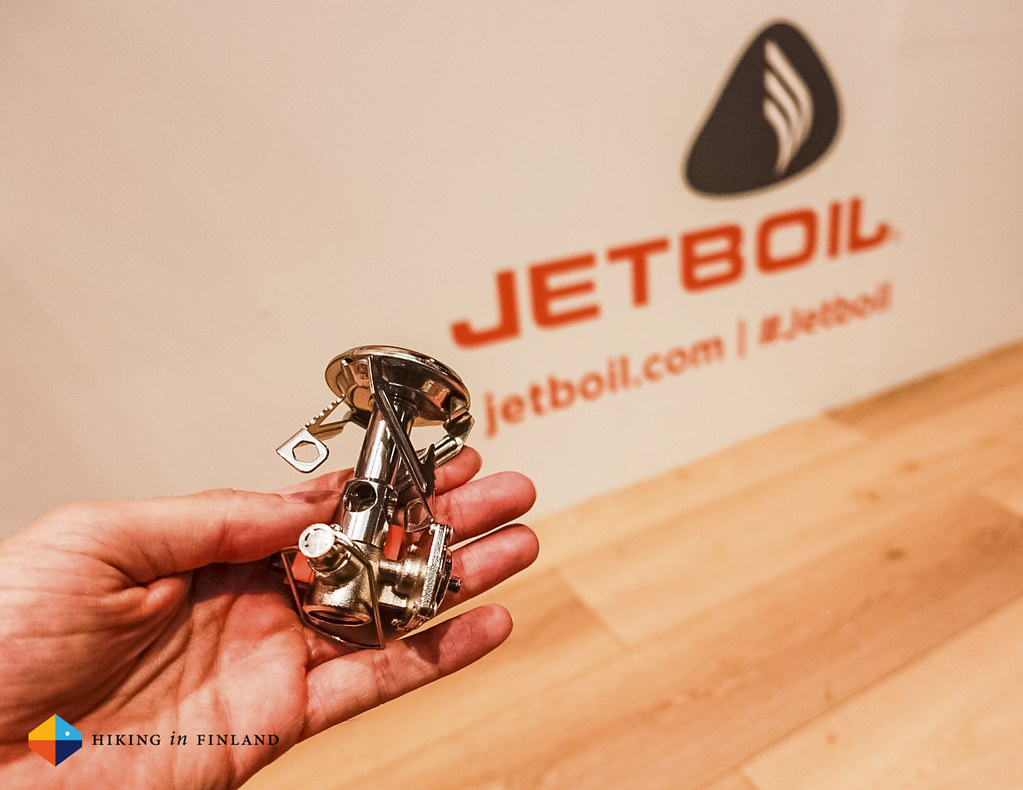 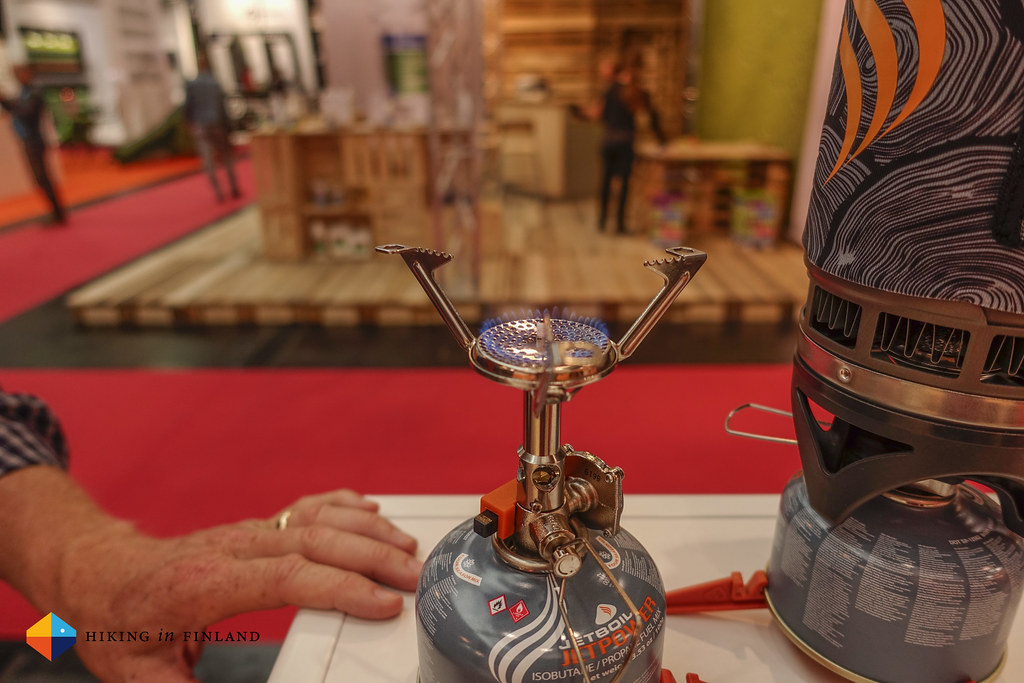 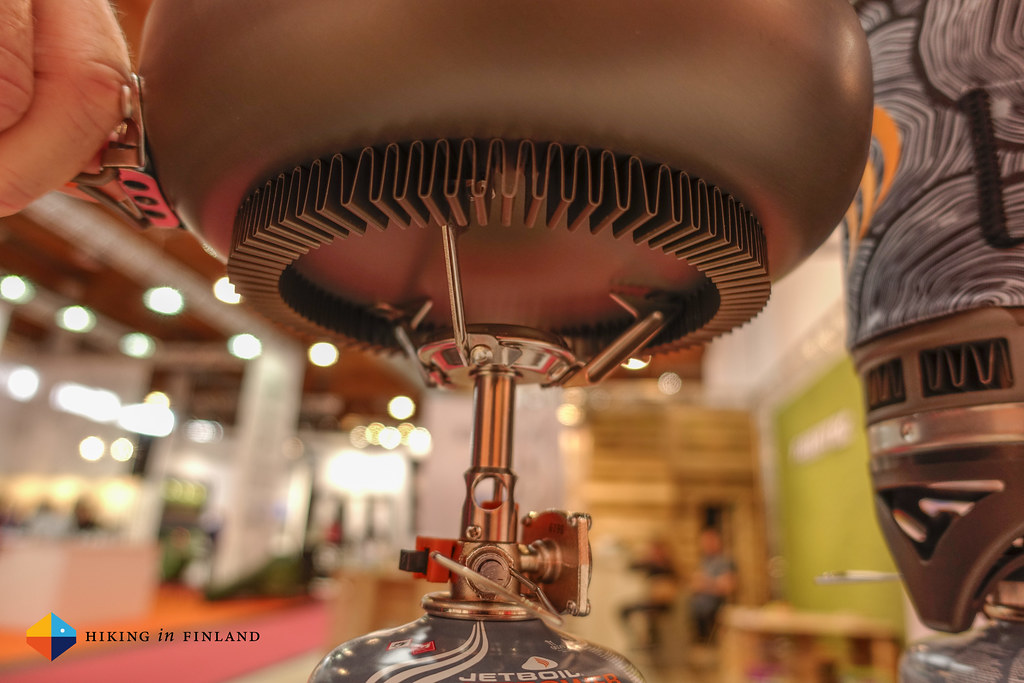 The MSR PocketRocket 2 combines the MicroRocket’s light weight with the durability and quick boil time of the PocketRocket and also is more compact and stable as its predecessor. It is now 73 g light, 20% smaller as the original and boils one litre of water in 3,5 minutes. The new pot supports accommodate a wider range of pot sizes. No info on output, price and how reliable it would work at high altitude. 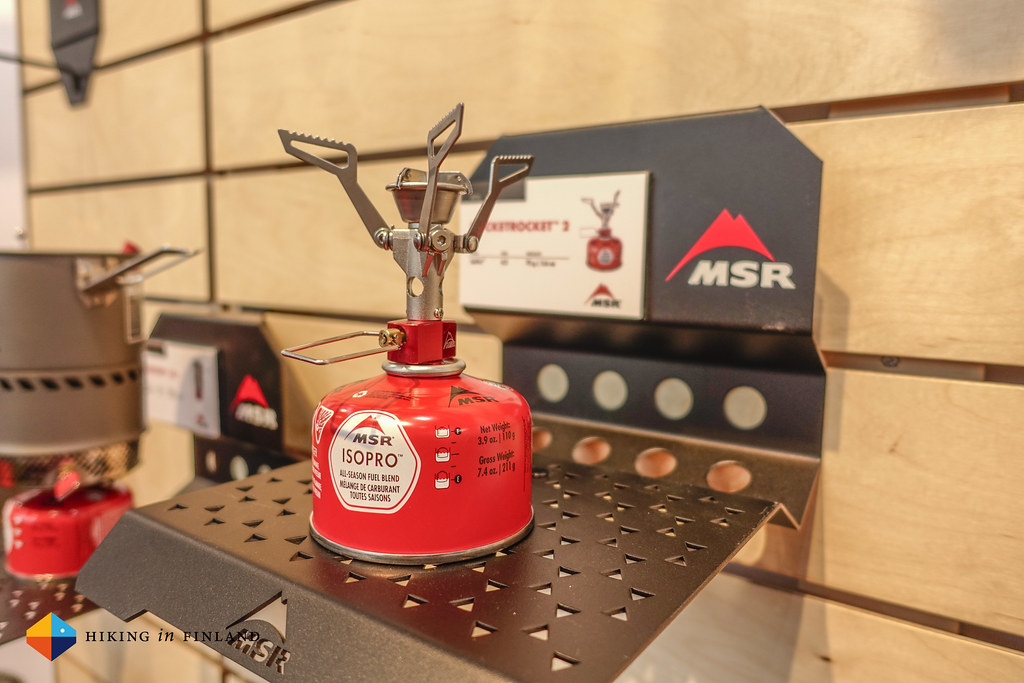 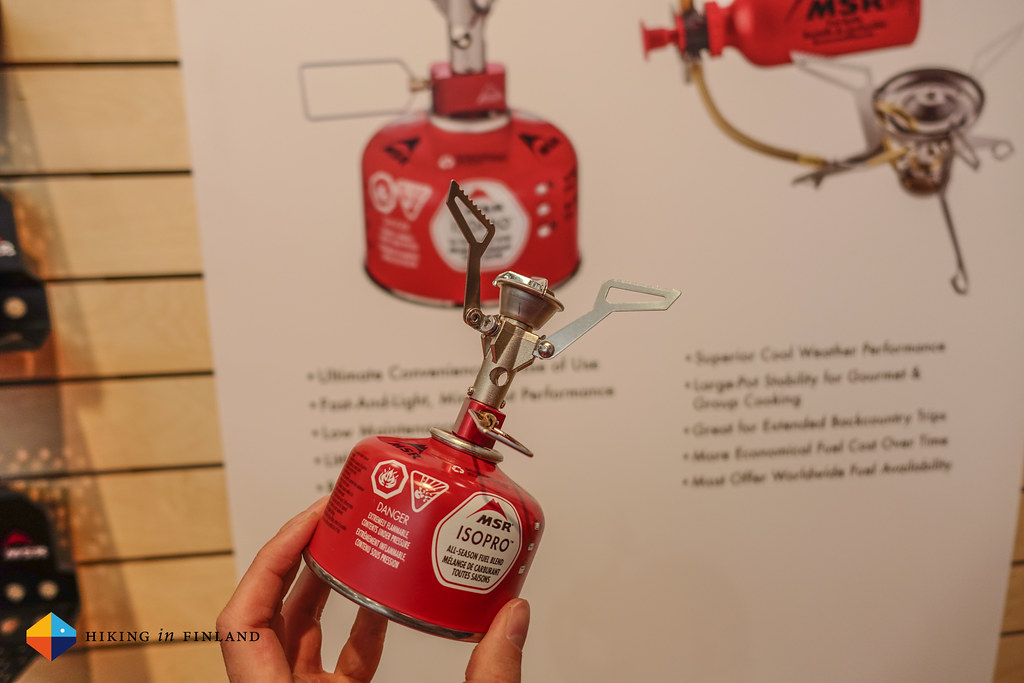 So much on stoves, lets stay with MSR and look at the new TrailShot Microfilter. Made for trailrunners & hikers who do not want to carry much water on their runs & hikes, this filter is a combination of a hose and filter. It’s pretty easy to use: Drop the hose into the water source - a stream in the mountains, a lake in the woods or even a puddle - and then squeeze the filter. The squeezing sucks water into the filter, and at the front, mouth piece clean & filtered water comes out. The filter takes out Protozoa and bacteria, and weighs 142 g for the Filter & Hose. The flow rate of 1 litre per minute is reasonably fast and you can treat up to 2.000 l of water with it. It should cost 50€ in Germany when it comes out next year. 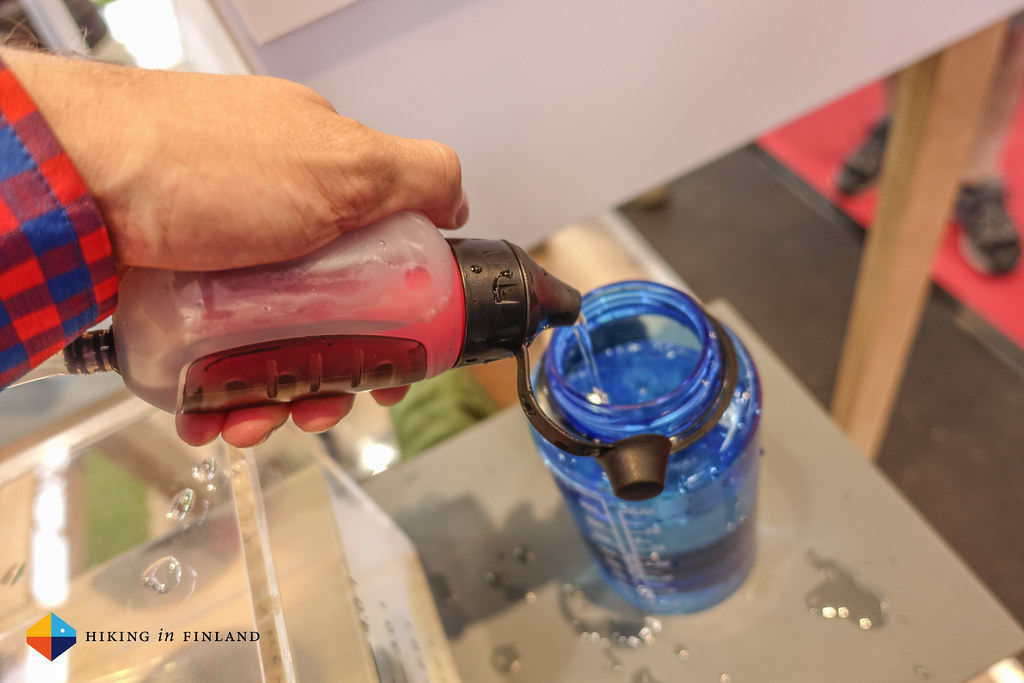 In my teaser post I already looked at the Katadyn BeFree and it was cool to see one in action at the fair. It’s a nifty setup that weighs only 55 g including the 0,5 l Hydrapak Softflask. The filter is easy to clean and has a high output rate. The filter itself is good for 1.000 l of dirty water, then you can replace the filter unit for 35€ - given that the whole package is 45€ it’s a bit expensive for just the filter me thinks, but if your Softflask is still OK why replace it? Rumours on the show floor have it that there will be bigger flasks coming in 2017 as well as a possible system, but as the filter does already fit on bigger Hydrapak softflasks you could just use on of these already. 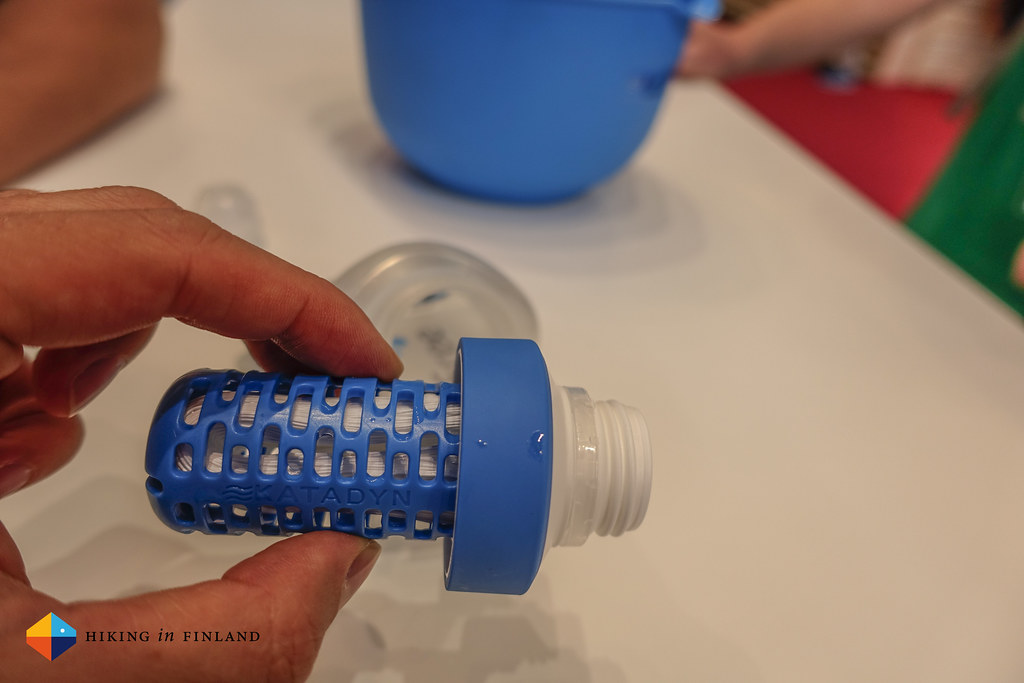 Do you like to make pretty night time photos of your illuminated tent under the Milky Way? Read a book before you turn it? Need some light to search something in your tent at night? Then the Petzl Noctilight might be something for you. Put your Petzl Headlamp in there during transport or at camp, put it on and it will diffuse the light beautifully for reading, searching and taking photos. It’s 85 g heavy, so if you’re an ultralight backpacker you need to ponder hard if it comes along, but for glamping it will be a great little accessory. 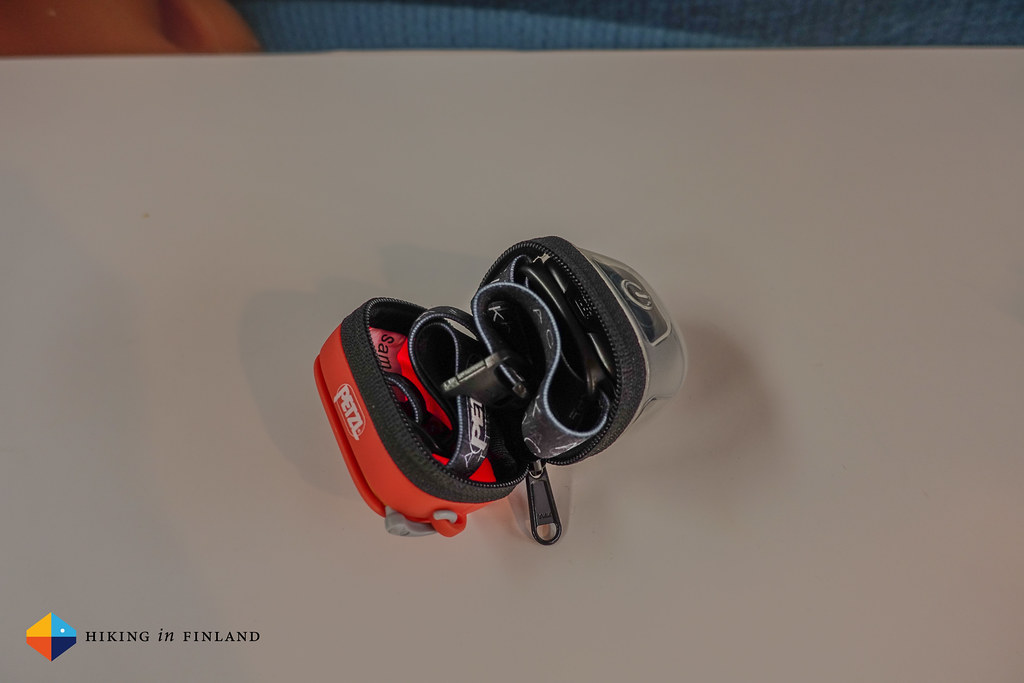 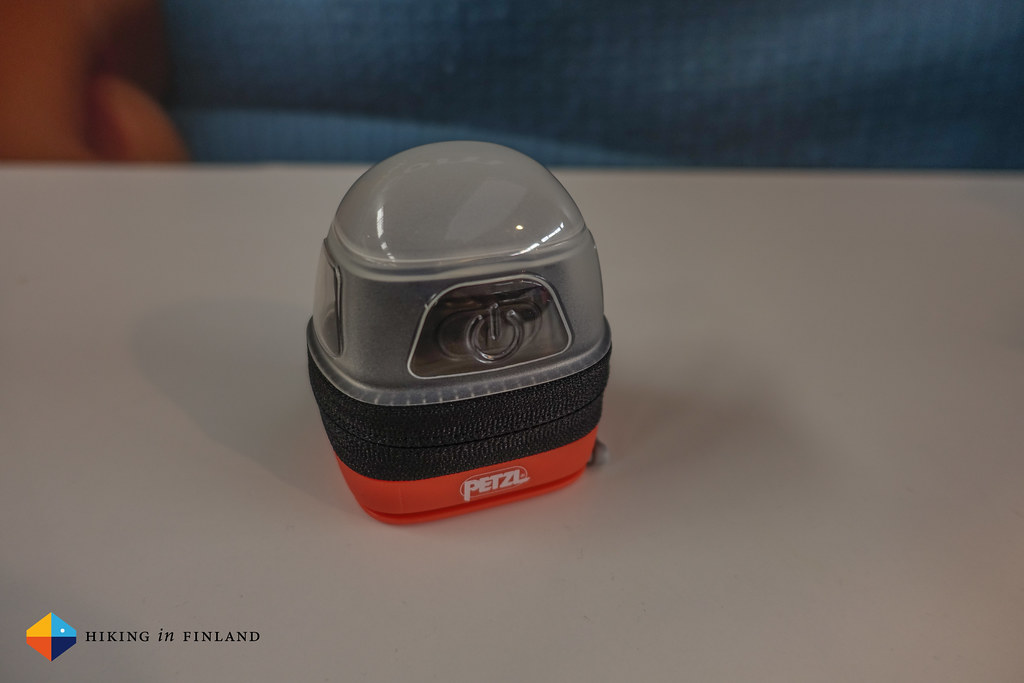 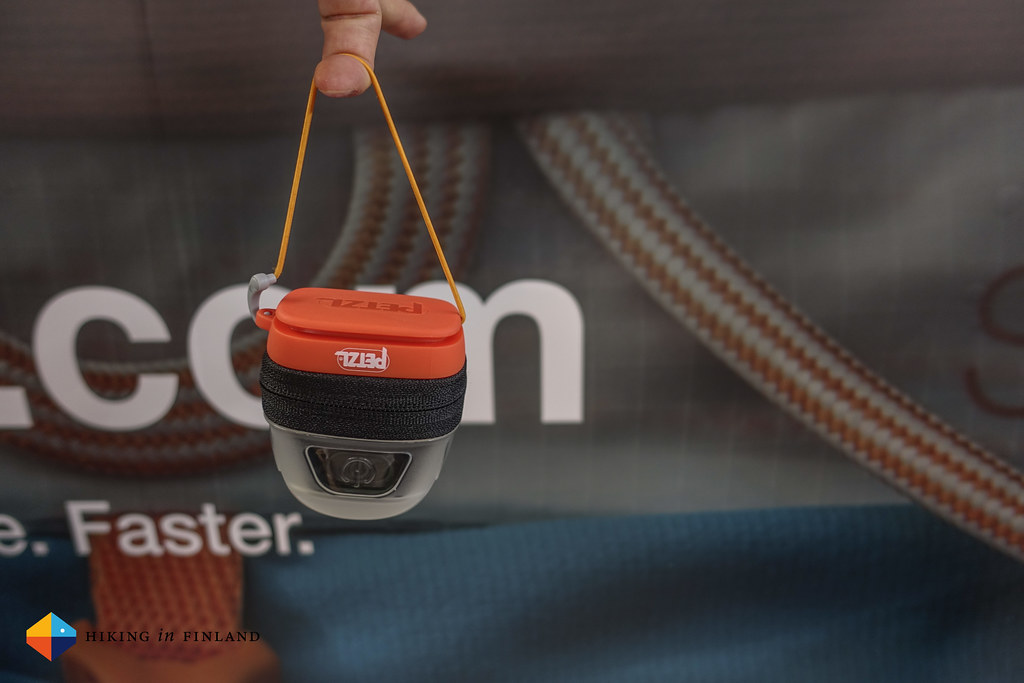 The HYBRID design allows Petzl’s new compact headlamps to run off both the CORE rechargeable battery or three AAA/LR03 batteries, without an adapter. A practical and flexible solution that allows the user to take advantage of each of these energy sources, depending on use. Compatible with all TIKKINA, TIKKA, ZIPKA, ACTIK, ACTIK CORE, TACTIKKA, TACTIKKA+ and TACTIKKA +RGB headlamps. The CORE rechargeable battery weighs 23 g and can be recharged via the USB port of your headlamp or directly, as the CORE also has a mini USB port. 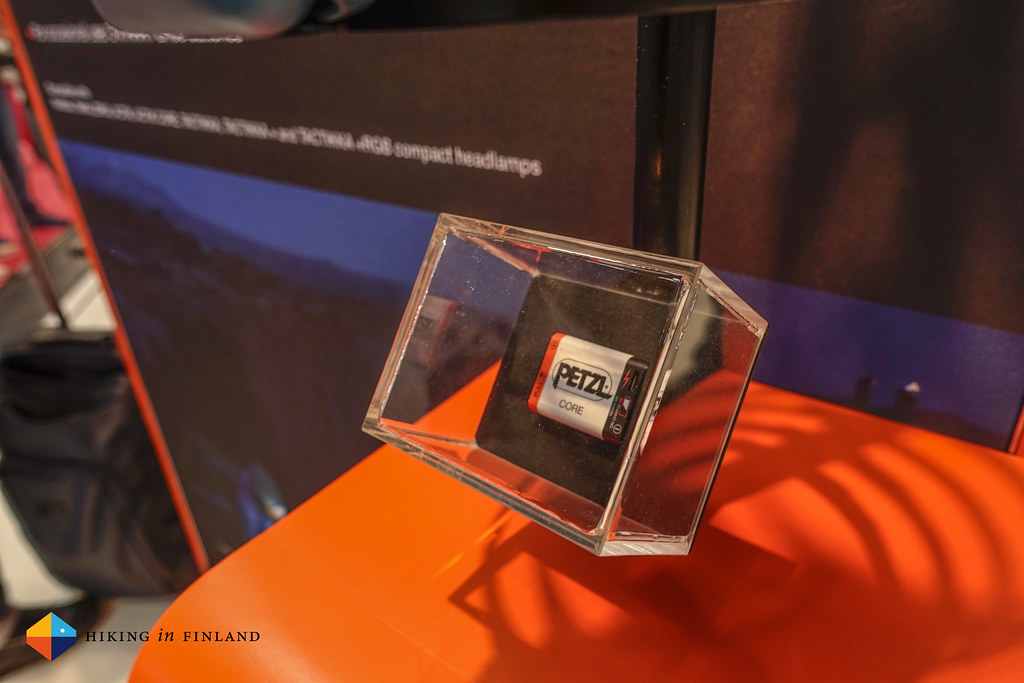 The Petzl eLite comes back, this time around with 50 Lumen at 27 g of weight. It keeps the red light, strobes, the whistle in the back and is still powered by two Lithium CR032 batteries. It now also has the red carrying case included again, and has a recommended retail price of 25€. 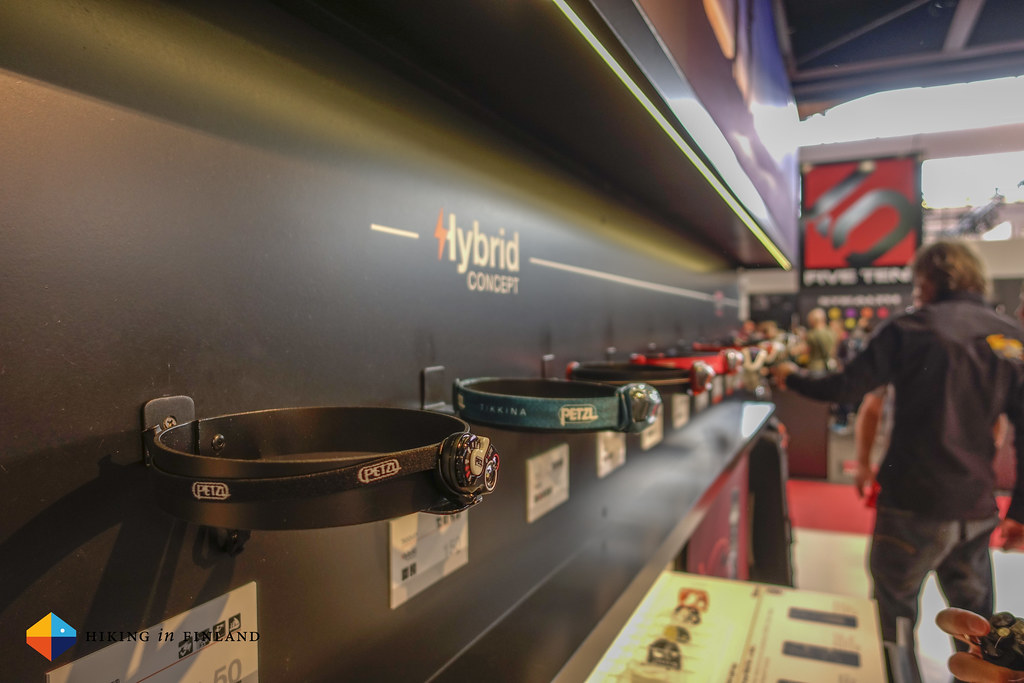 Other Petzl headlamps have got minor updates - you know the drill: More lumen, new colours. But the Actik and Actik Core Headlamps are actually new and aimed at active people, or to be more precise as everyone that walks around outside in the dark is active: Active people who need lots of light and go fast. The Actik packs 300 Lumen and is designed for mountaineering, running, hiking and backpacking at night. It has red light for keeping your night vision, and reflective details on the headband make you visible to others outside in the dark. It works with the CORE rechargeable battery, weighs 90 g and should cost only 40€! The big brother Actik Core packs 350 Lumen, weighs only 80 g and costs only 55€. The CORE battery is included, hence the Core in the name. 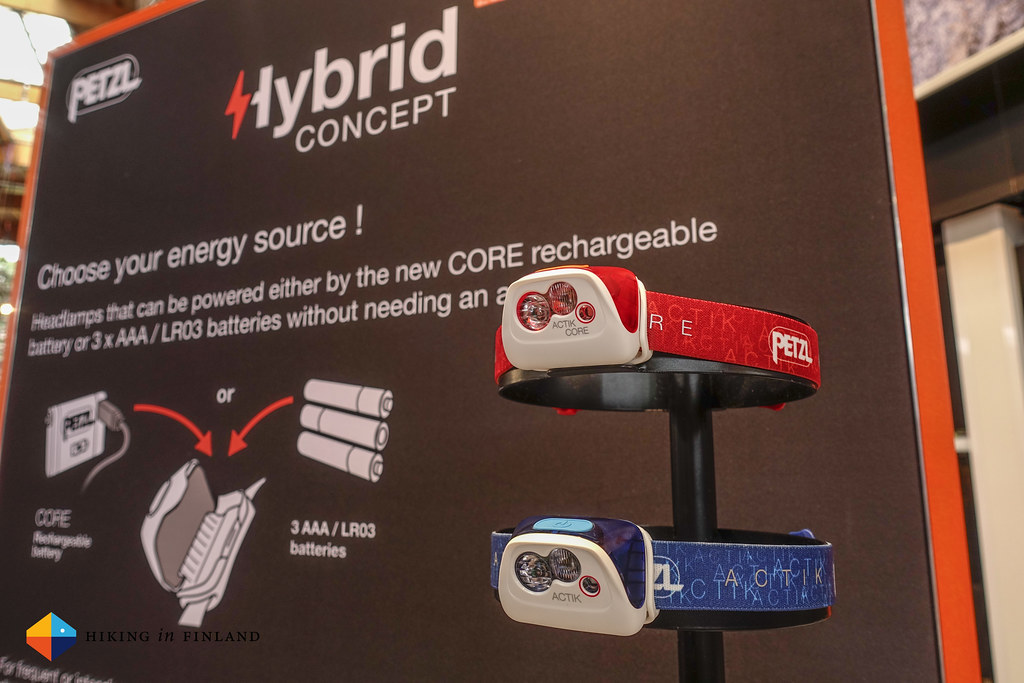 Another light and rechargeable headlamp is the Black Diamond Iota. The 56 g light (and that’s including batteries) headlamp packs 150 Lumen and is powered by an lithium ion rechargeable battery which is loaded in three hours via USB. The Iota also has the PowerTap Technology which allows you to fast and simply transition between full and dimmed power, and a 3-level power meter shows the remaining battery life for three seconds after you switch on the headlamp. 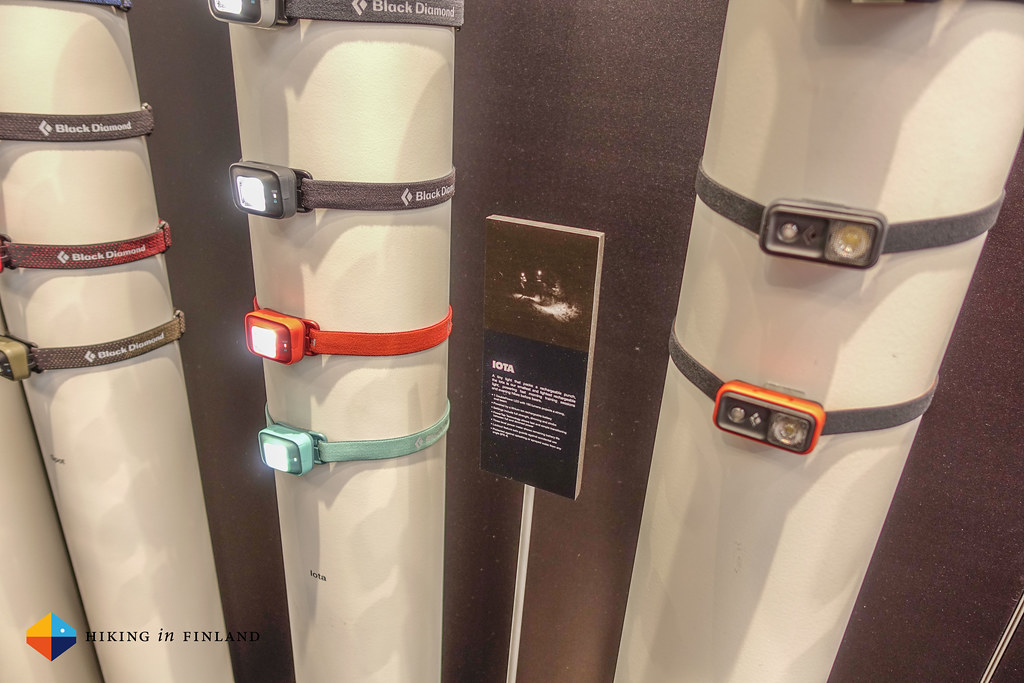 I’m a collapsible and Kuksa kind of man, but as I was strolling past the SIGG booth I was shang-haied in by a PR Person and informed about the new bottles from the Swiss company. So let me briefly tell you about them as well, alrighty? The Miracle Bottle on the far right (the blue one in case you don’t remember where right is) has a revolutionary drinking cap that allows the desired amount of water to be released simply by pressing an ergonomic button. Made of Tritan it holds 0,6 l of your favourite liquid. As stats such as weight and prize are often not of importance to PR people and I was in a hurry onwards and couldn’t be bothered to ask via Email we’ll need to find out next year when one of us buys it and weighs it. Lets ignore the green bottle next in line and move on to the grey-ish one, the Hero Bottle. It has a Tritan bottle neck and a polypropylene body that can be squeezed. It has also a 0,6 l volume, is Made in Germany and is easy to use with one hand, SIGG writes. Which brings us to the last bottle in the line-up on the left, the Total Clear Bottle. It is heat resistant and dishwasher safe, made in China from Tritan and has a SIGG Wide Mouth Bottle One Top lid which allows you to fill up the bottle simply without having to remove the lid. The volume is 0,75 l and it’s also possible to fill carbonated drinks in it. 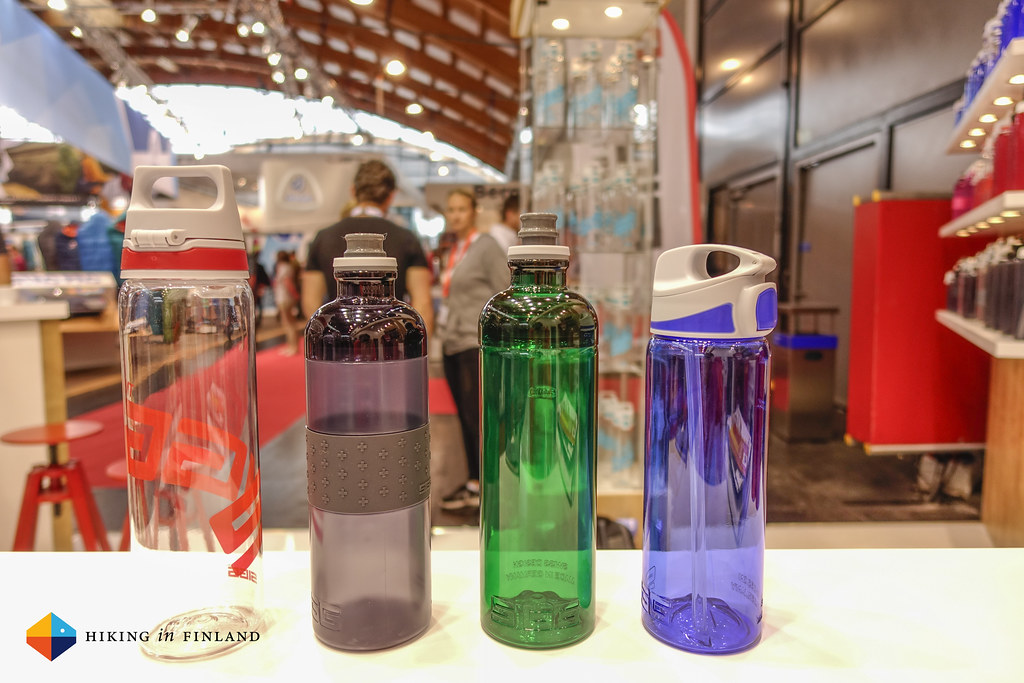 The Roll Doc from Ortovox is an emergency kit which you can roll up. It packs compact when not needed and in case of an emergency you roll it open where it reveals five compartments with different First Aid supplies, from an emergency blanket to scissors and bandages. The Roll Doc weighs 190 g fully filled, is waterproof and has illustrations on the inside which help you figure out how to help your injured friend. 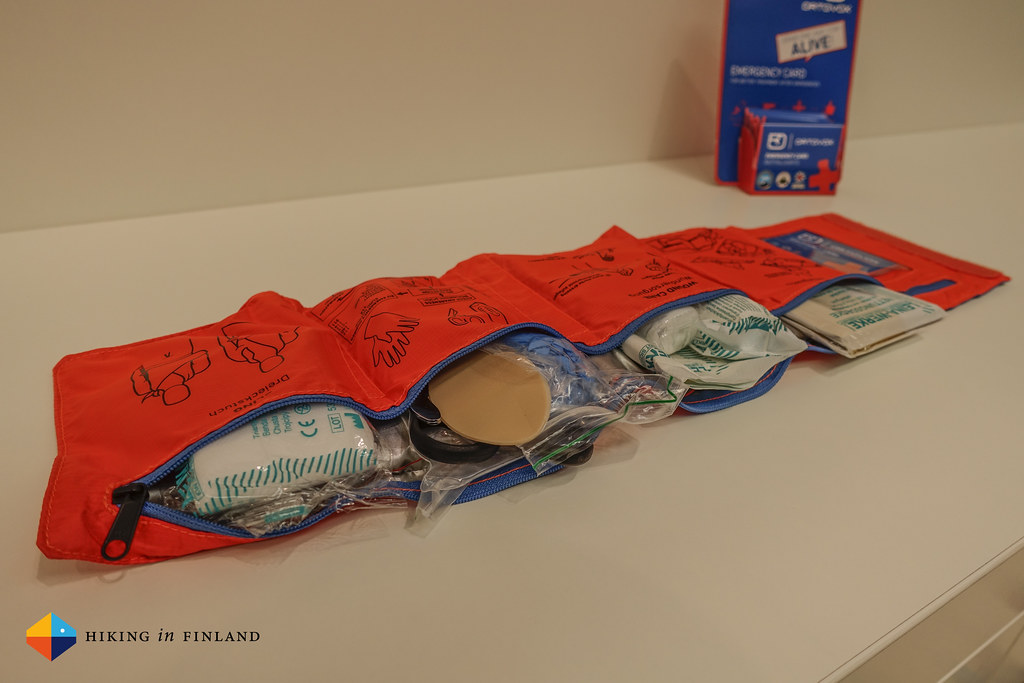 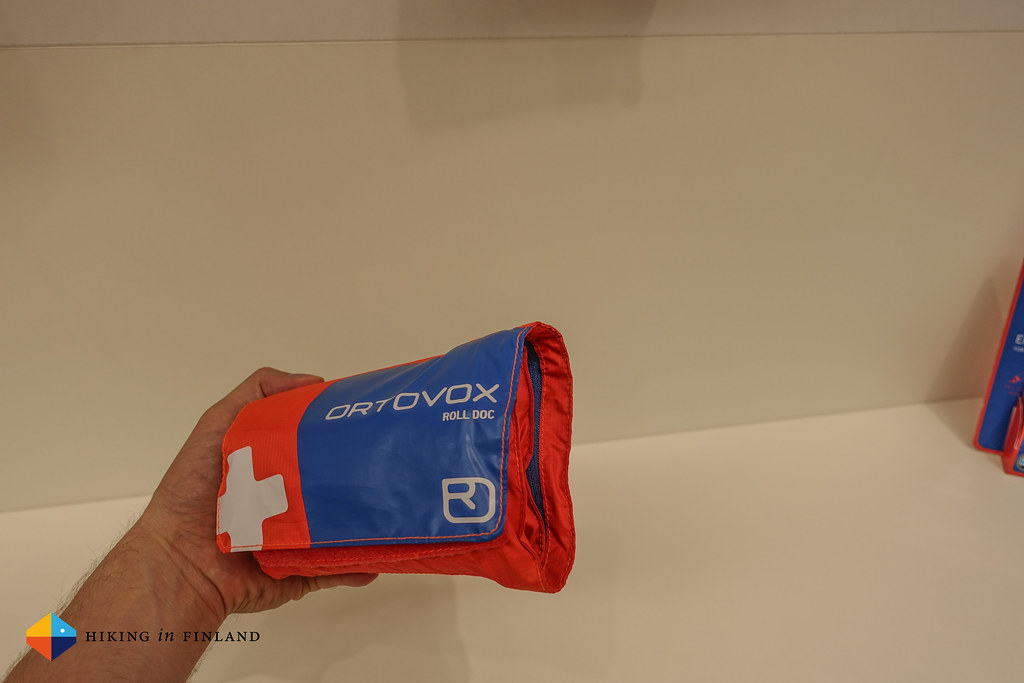 And finally a look at a new knife. The Morakniv Eldris is 76 g light for knife & sheath (the knife itself is 60 g light) and lays beautifully in the hand. It’s gonna be available later in the autumn of this year, in five colours which show the general trend of colours for the next few years: More toned down & earthy. This fixed blade does actually fit into your pocket and super versatile in use: Take it along hiking & camping, use it as a safety knife when climbing or even take it hunting. The thermoplastic rubber on the handle ensures a safe grip of the little knife, which is 143 mm long in total. The blade is 56 mm long, which theoretically would even make it carry-on compliant, but I wouldn’t try that personally. You can use the back of the blade to strike a firesteel, and indeed the Eldris is available in a set with a lanyard and firesteel. I might do a more detailed review on this little friend in the future, as I already have one! 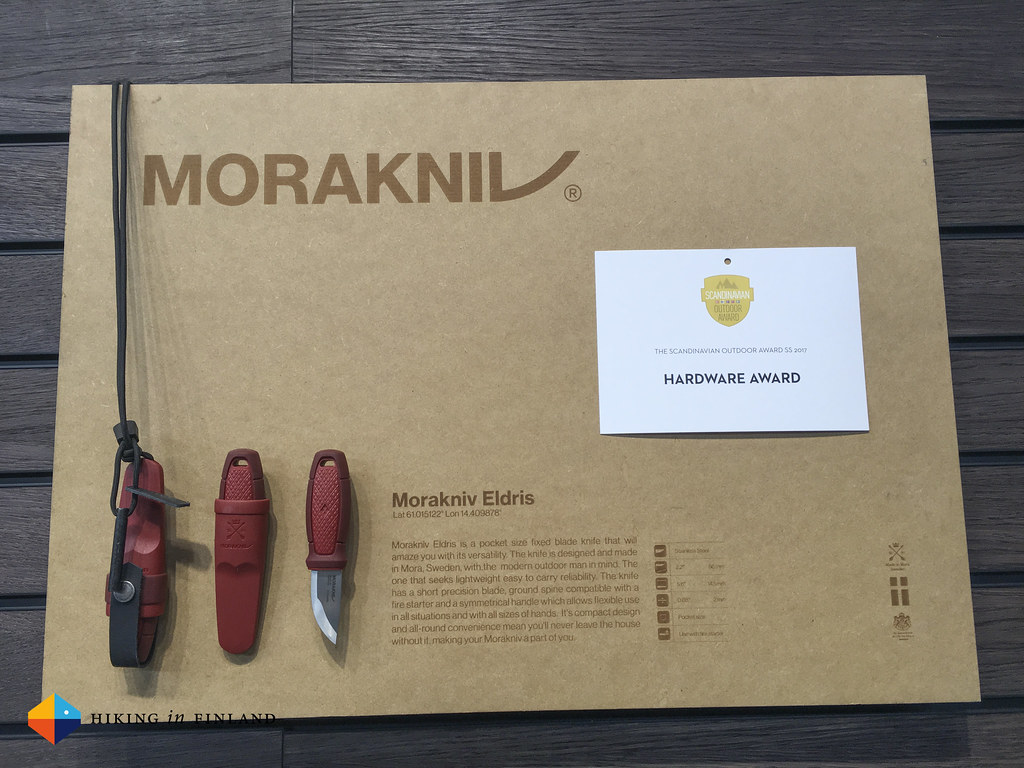 Disclaimer: There are affiliate links in this article to help finance the website. You either can avoid them like hell or click them and buy gear and apparel via them to support me. Read the Transparency Disclaimer for more information on affiliate links & blogger transparency.