If you prefer the Outdoors over Cities but need to go to Helsinki - squeeze in a Microadventure to Sipoonkorpi National Park the next time you are in the Capital of Finland! 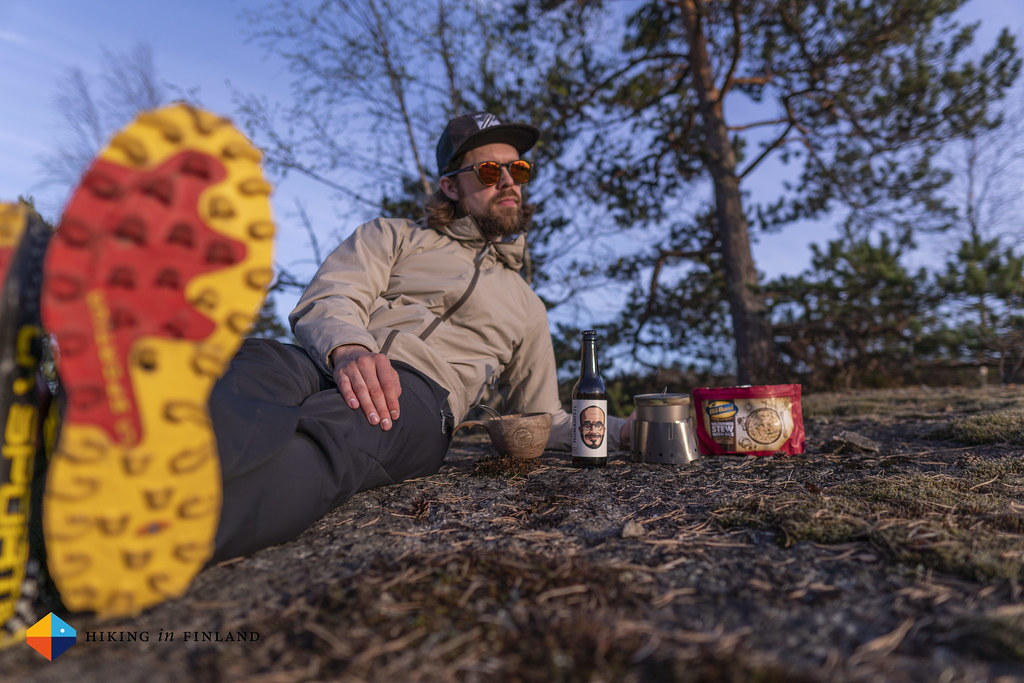 Last week I was going to Helsinki for PING Festival 2018 and I decided to sneak in a wee Microadventure in Sipoonkorpi National Park before the event. Sipoonkorpi is a new-ish National Park and less than an hour by bus away from the centre of Helsinki, so it makes for an excellent place to escape the city for a while and enjoy this unique park with its forests, hills and beautiful nature. If you prefer Video over photos and want to see some enchanting Drone Footage, relaxed hiking and me brushing my teeth just hit play:

I took the train to Helsinki, a great way to do some work and watch the latest Episode of Neo Magazine Royale, and then jumped on the Tram to the Clarion Helsinki to drop of the stuff I needed for the following few days in Helsinki and Ruka. Then it was off with the Bus to Sipoonkorpi National Park, which lays on the outskirts of Vantaa, one of the three cities which makes up the Helsinki Metropolitan area. I got off in the middle of nowhere at a scenic road. I followed the sign to the Tractor Museum and then just walked down the road where I saw the blue “Sipoonkorpi National Park” sign. Shortly after I saw the Luontopolku sign, this trail can be walked in either direction but as it was early in the day and I had an idea where I wanted to sleep and what I wanted to see when I followed the trail first north. 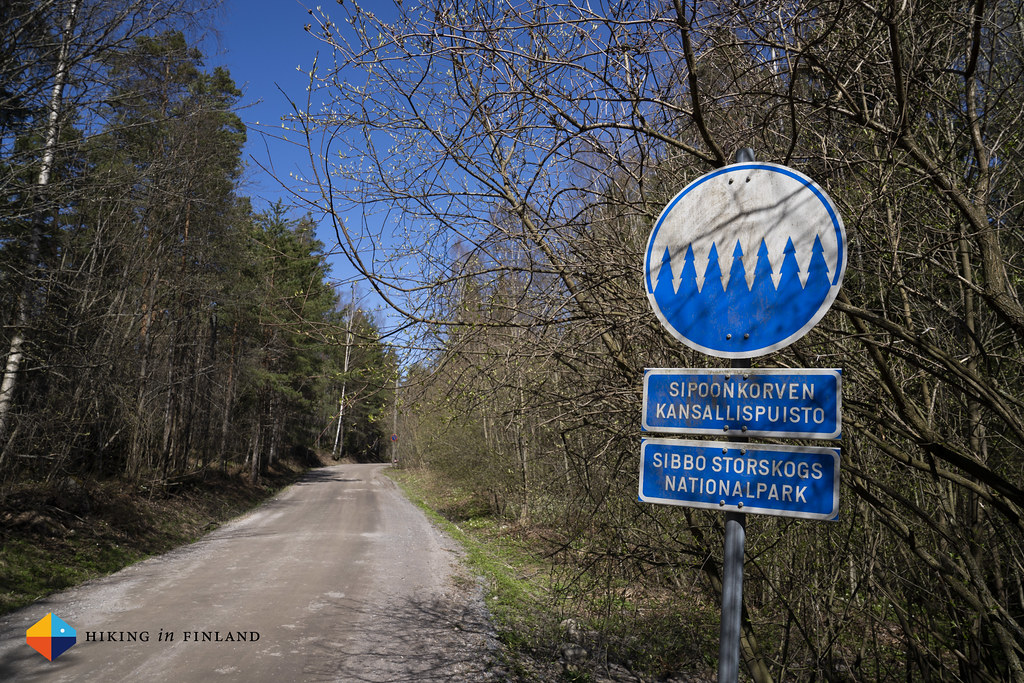 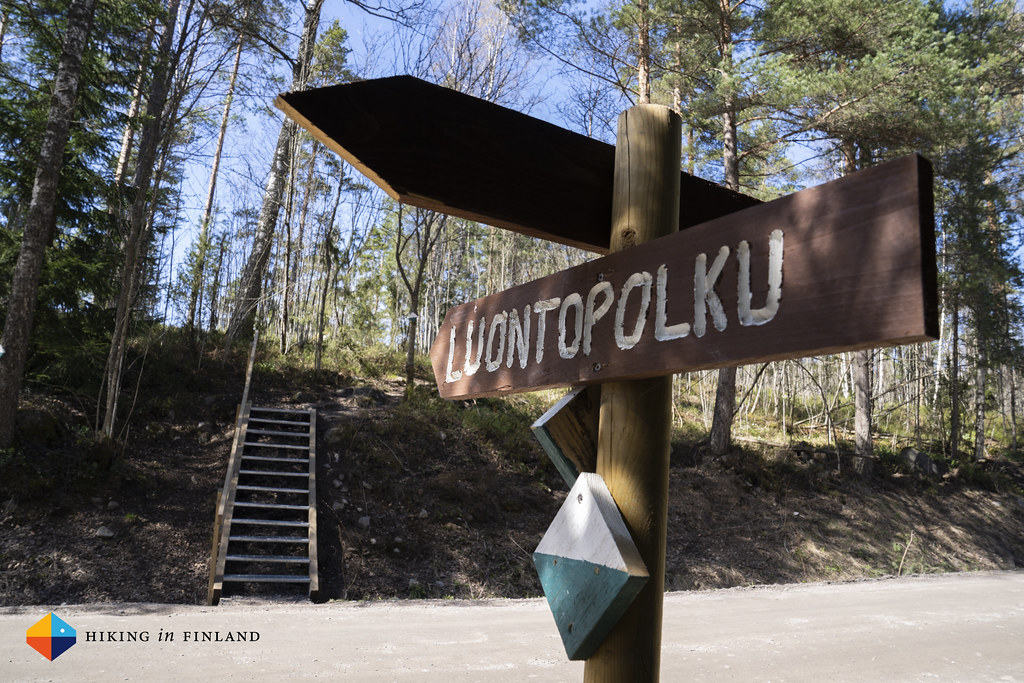 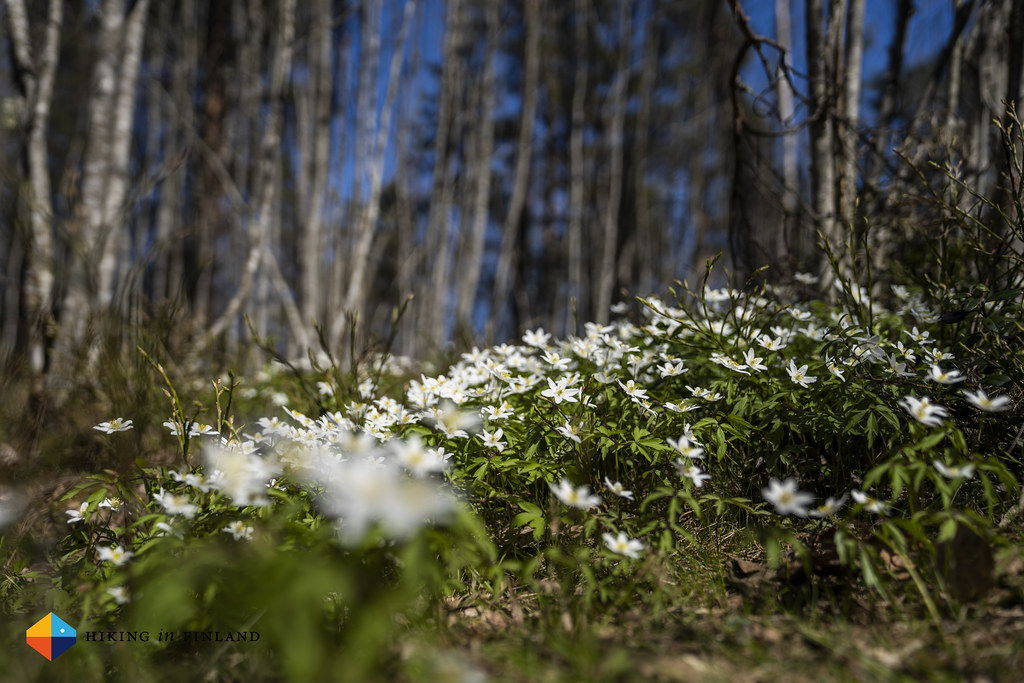 Right away I loved the little trail - Wood Anemone were everywhere along the narrow trail which went through a very young forest which was beautiful, and then one got a first taste of the granite slick rocks which I later see a lot in the Högberget section of the trail. This section was short and after a short while I was out on the forest road again, before entering a more shaded pine forest on the other side. This section ended also again in that same forest road, and then the trail went on the road further till a parking lot where quite a few cars were parked and a few boulderers where just shouldering their crashpads to go hug some pebbles in the National Park’s surroundings. I followed the trail towards the Kalkkiruukki Laavu, which was very busy with day hikers grilling sausages and enjoying the fantastic warm weather. 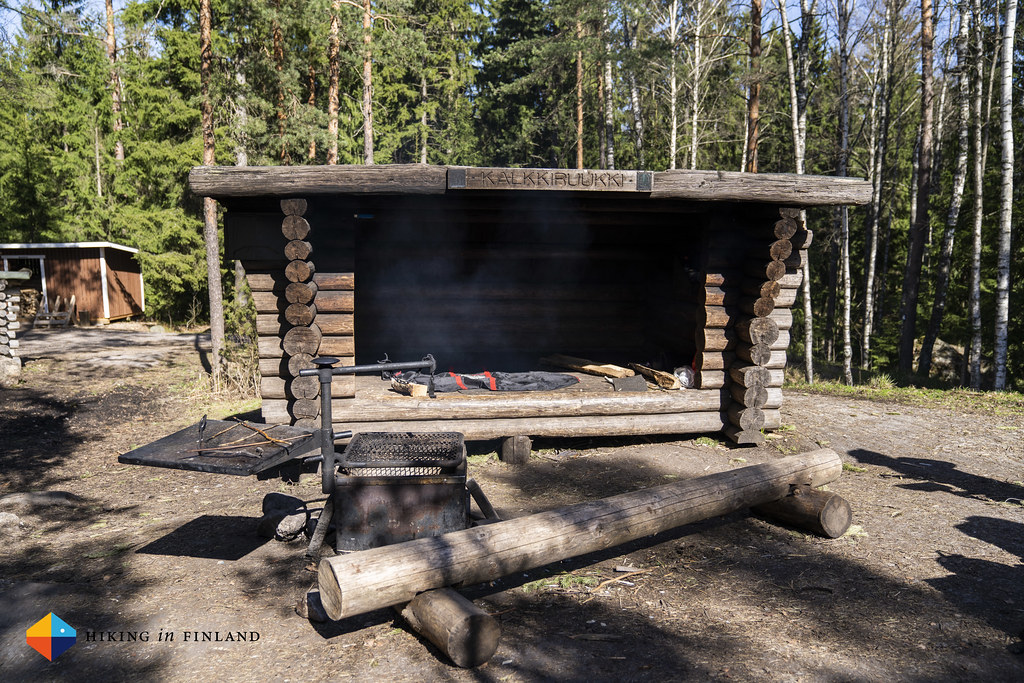 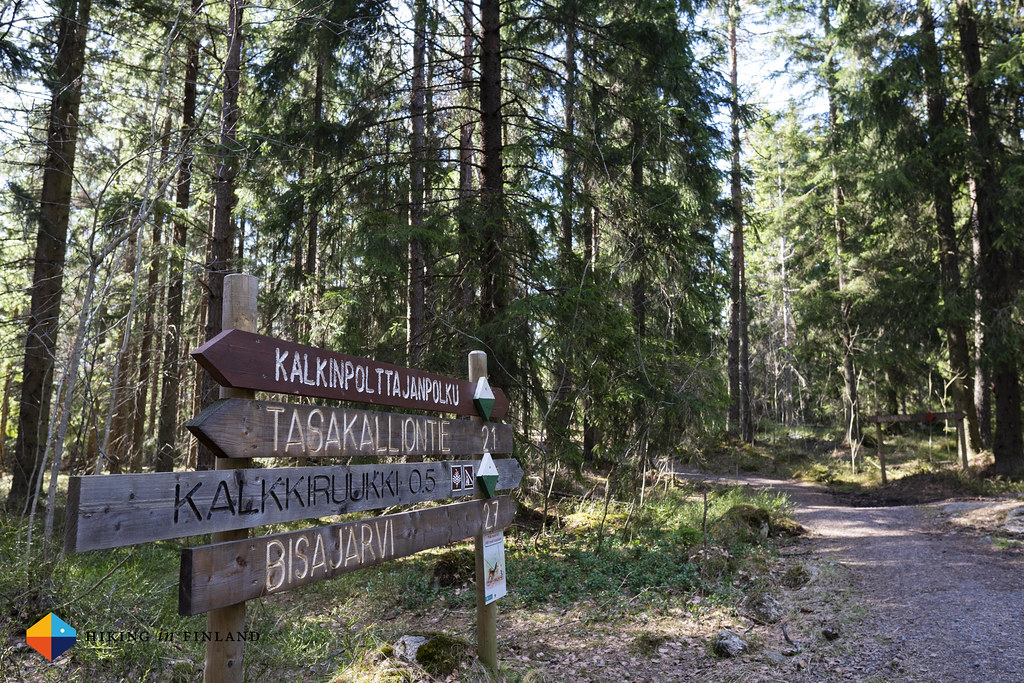 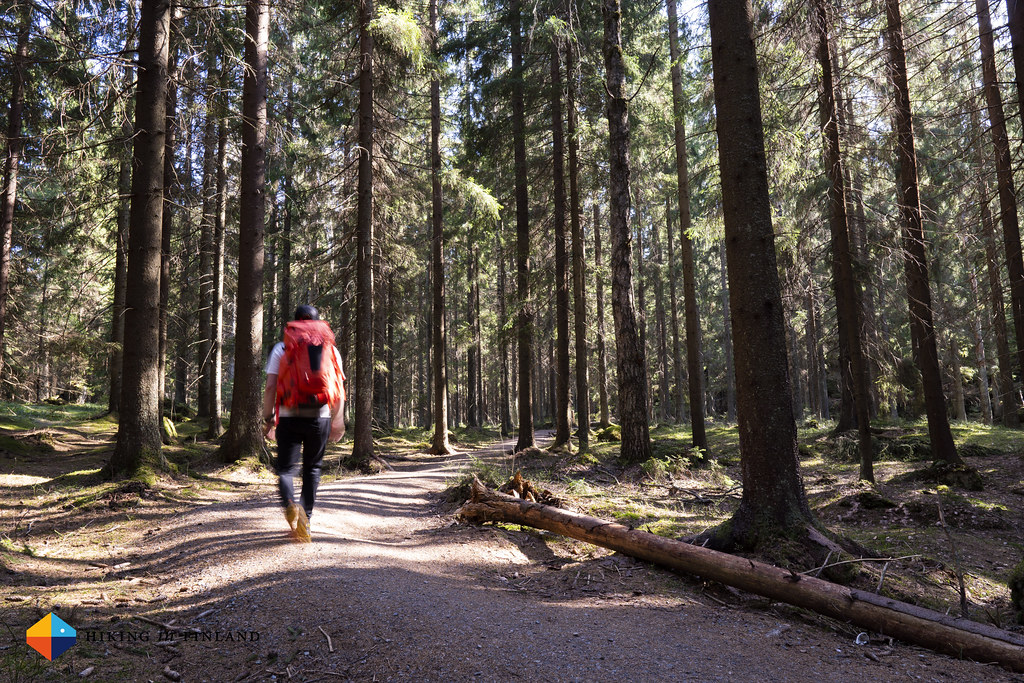 I sat down for an hour or so, drunk a coffee and shot some video scenes, and complained on Instagram that my NEW Katadyn BeFree 1l bottle was apparently already broken as I got it (see it here on Twitter). I packed up and then the trail continued for a few kilometres through dark pine forests, past rocks, climbing up and down and over streams. The path was wide and great condition, and here and there one could see where the winter XC trail goes. I had a chat with two women who where hiking with their dog and inquired about Ticks, and according to them these little pests are not a problem here (I didn’t encounter any). 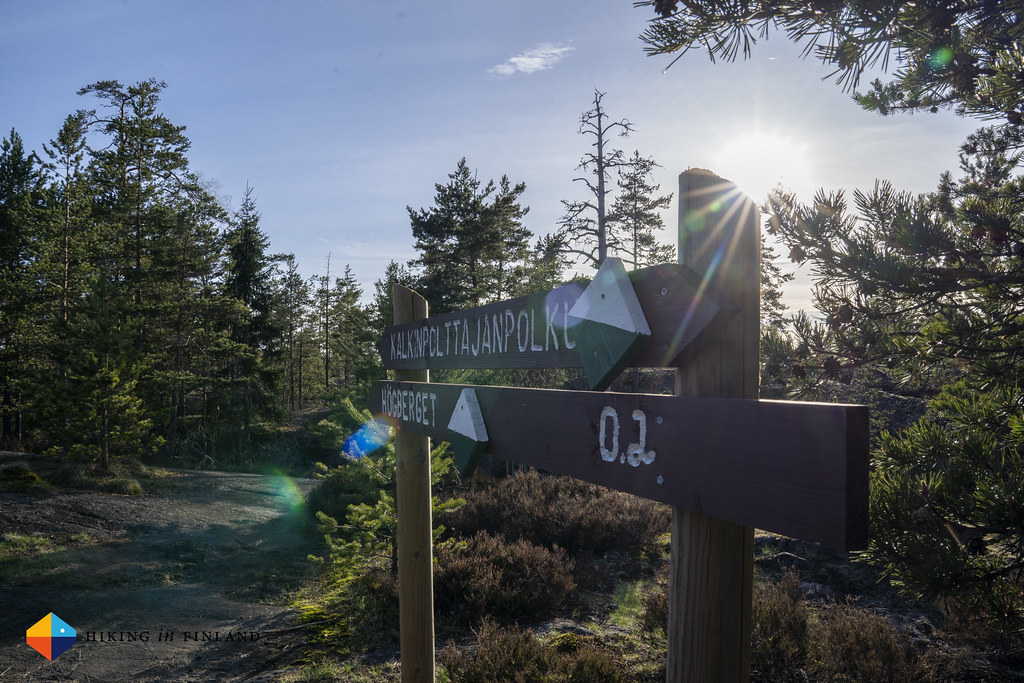 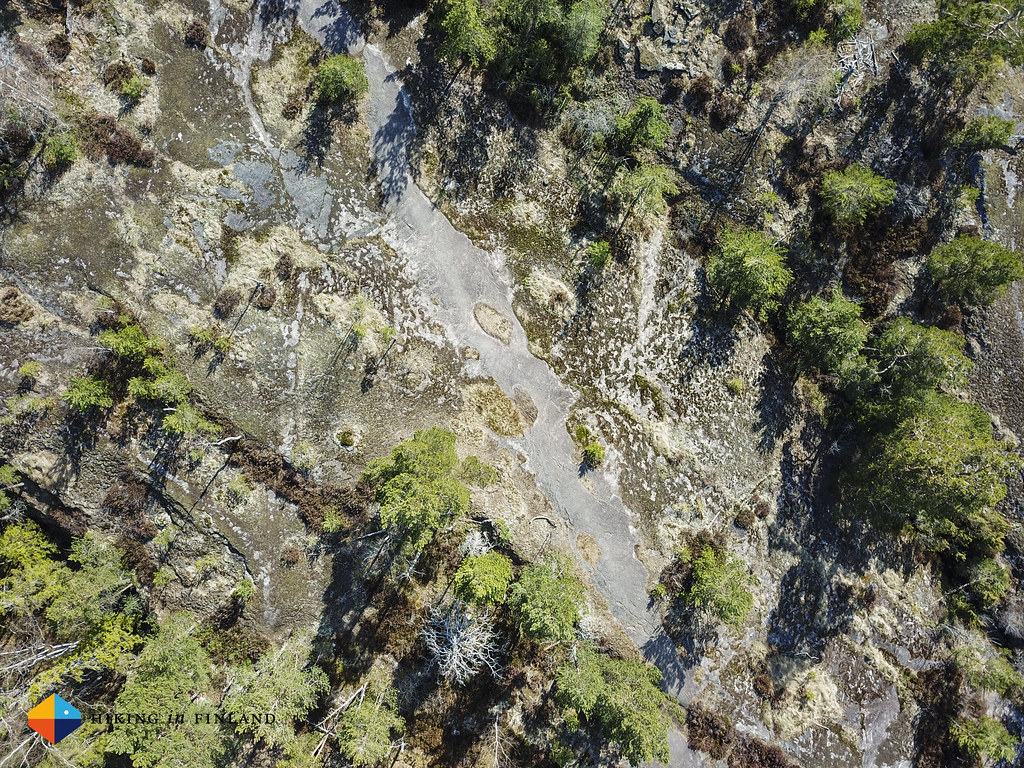 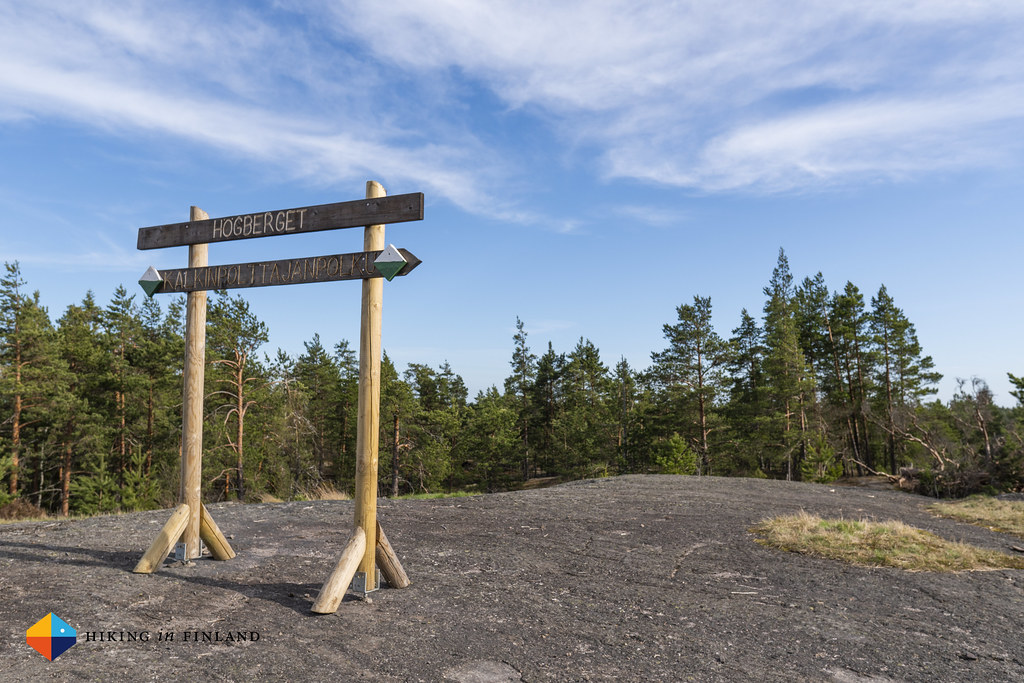 And then I arrived at Högberget! These are probably the most popular spot of the National Park, I saw a lot of people here, enjoying the view from the higher rocks towards the city and sea beyond (I didn’t see the Baltic, but it should be possible to see it on a clear day). These slick granite rocks are really nice and I decided that I wanted to sleep under the stars somewhere over there, though as there was no water close by I first needed to find a water source - and I wanted to finish the trail before looking for a place to sleep. As the days are long in Finland now - the sun sets somewhere around 22:30 - I had enough time to do everything, and still could find a nice spot to roll out my mat & quilt and have something to eat. 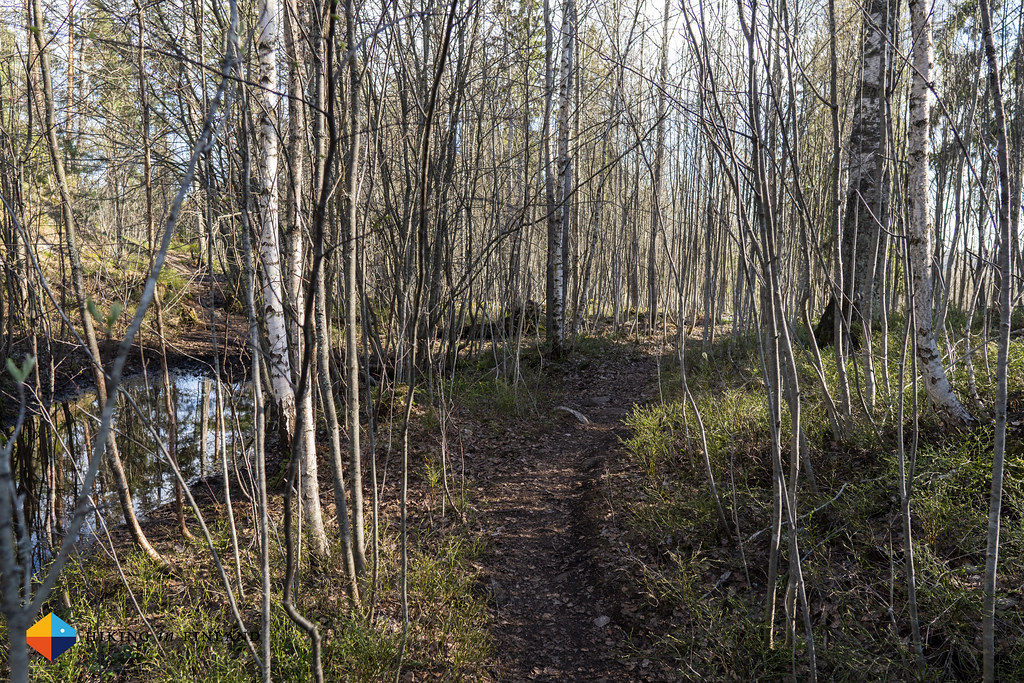 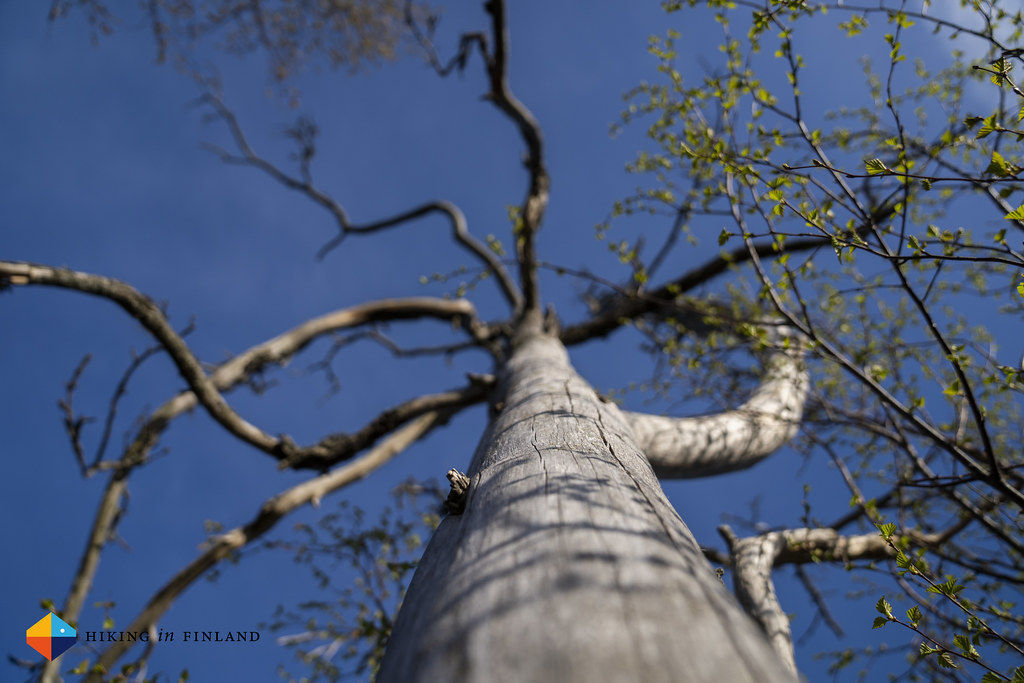 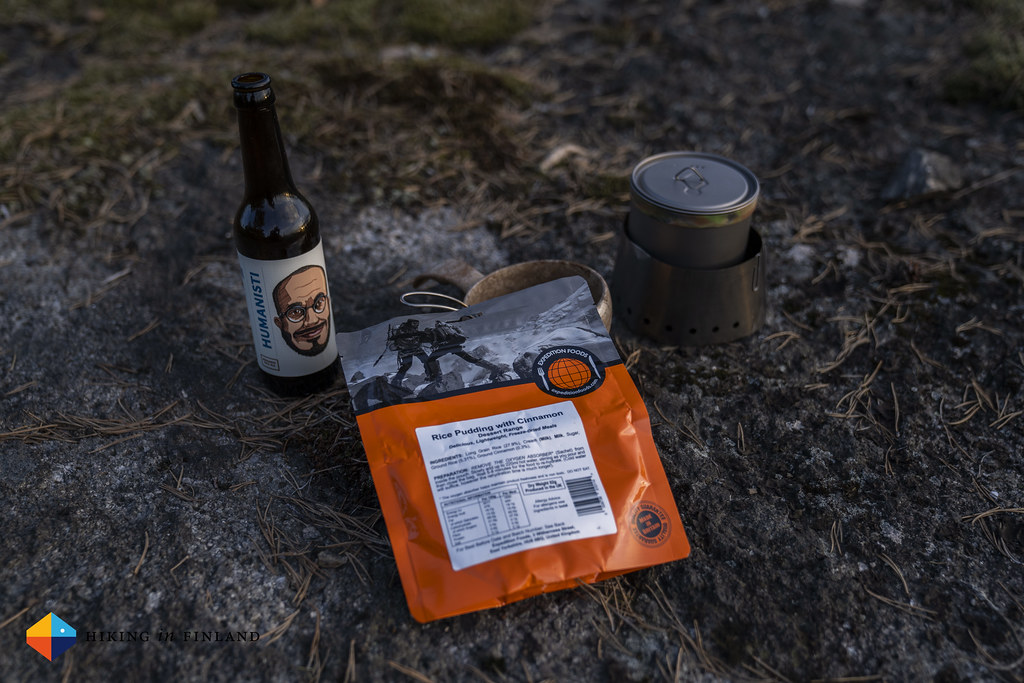 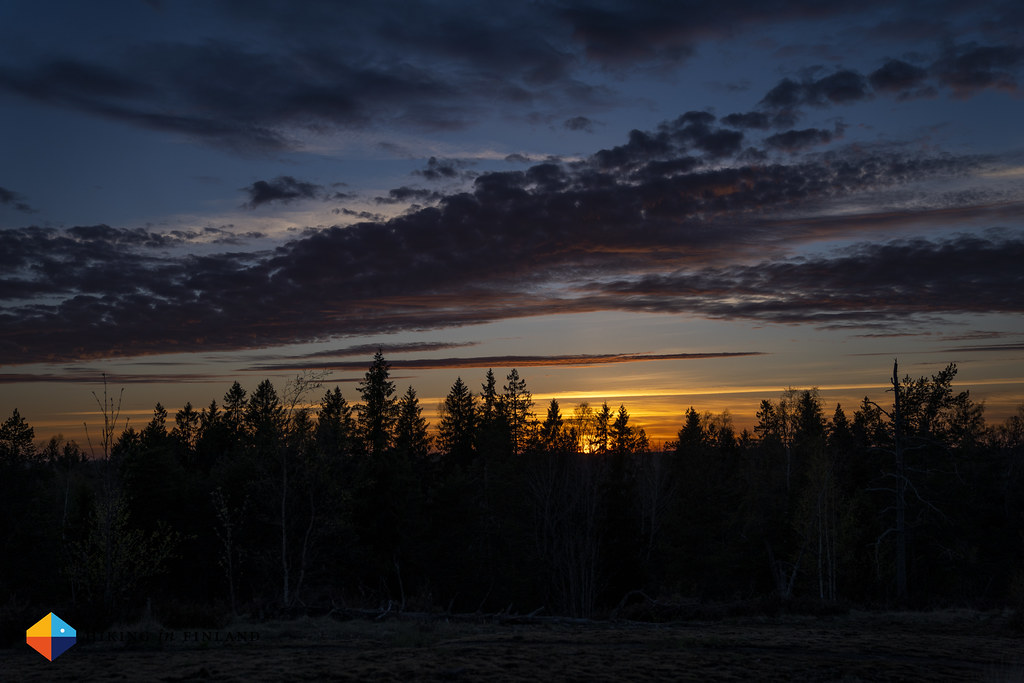 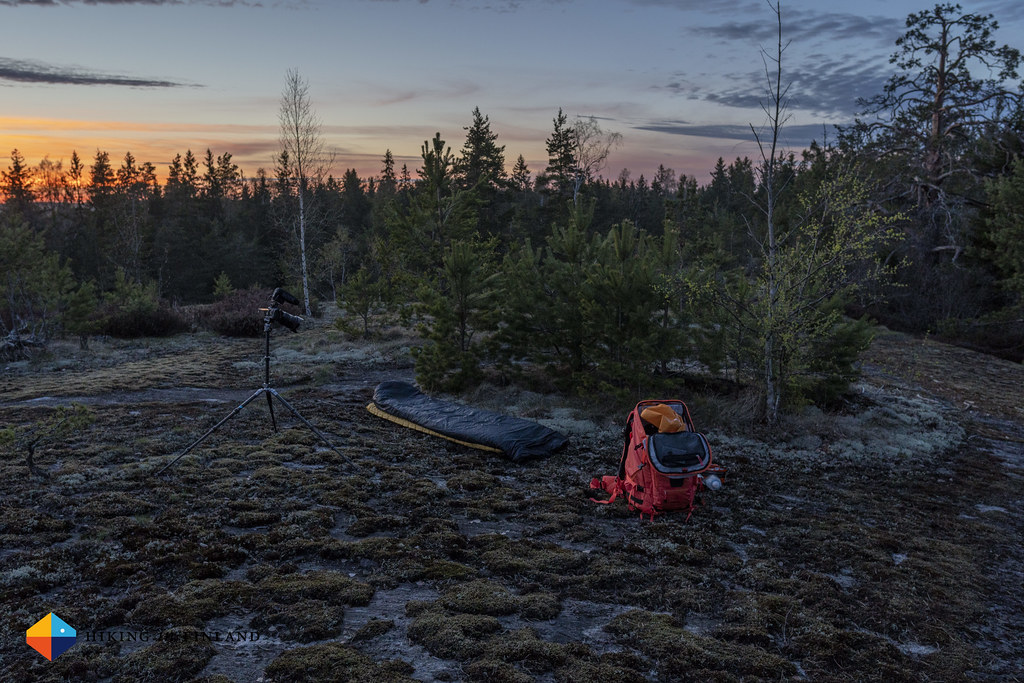 I slept shortly that night - because I got up at 1:00 o’clock to photograph the stars, and low-and-behold, I got very lucky as I even captured some Northern Lights! In May! The next morning I slept in as long as I could before the sun was just too warm, made breakfast, shot a video about the As Tucas Sestrals quilt and then ran back to the Bus stop to catch the Bus back to Helsinki - I had a Design Tour to attend and didn’t want to meet that! 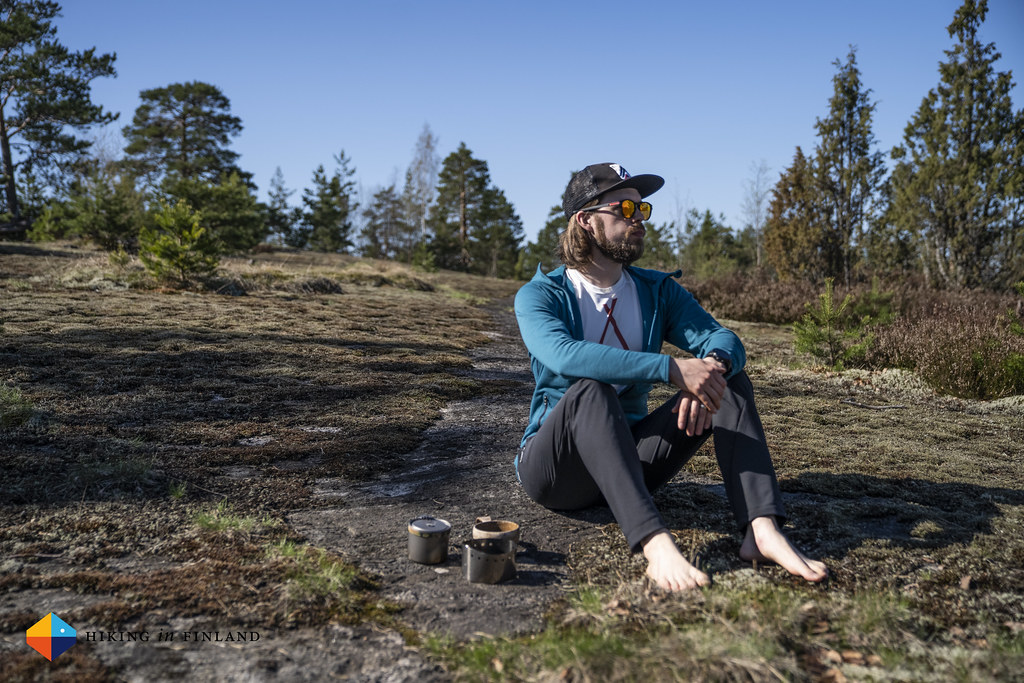 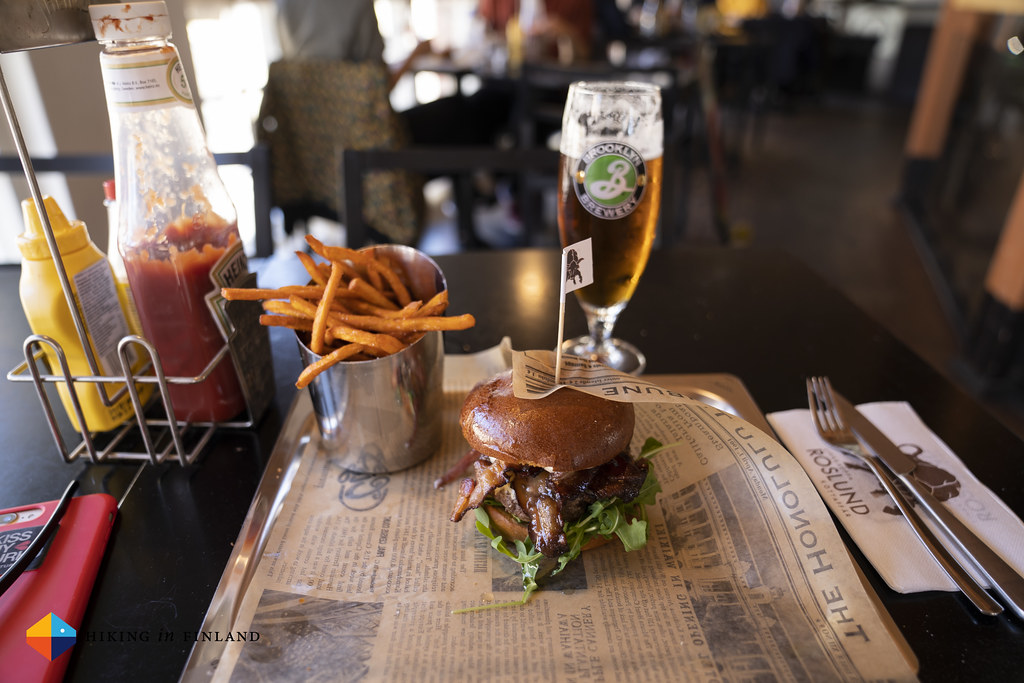 All in all it was a fantastic little trip: Beautiful warm T-Shirt weather, stars and Northern Lights, beautiful nature and lots of fresh green on the ground and trees! If you come to Helsinki, Espoo or Vantaa (or life there!) and have an extra day, do it like me: Take along your Ultralight backpack, some food and hop on the Bus to Sipoonkorpi National Park! 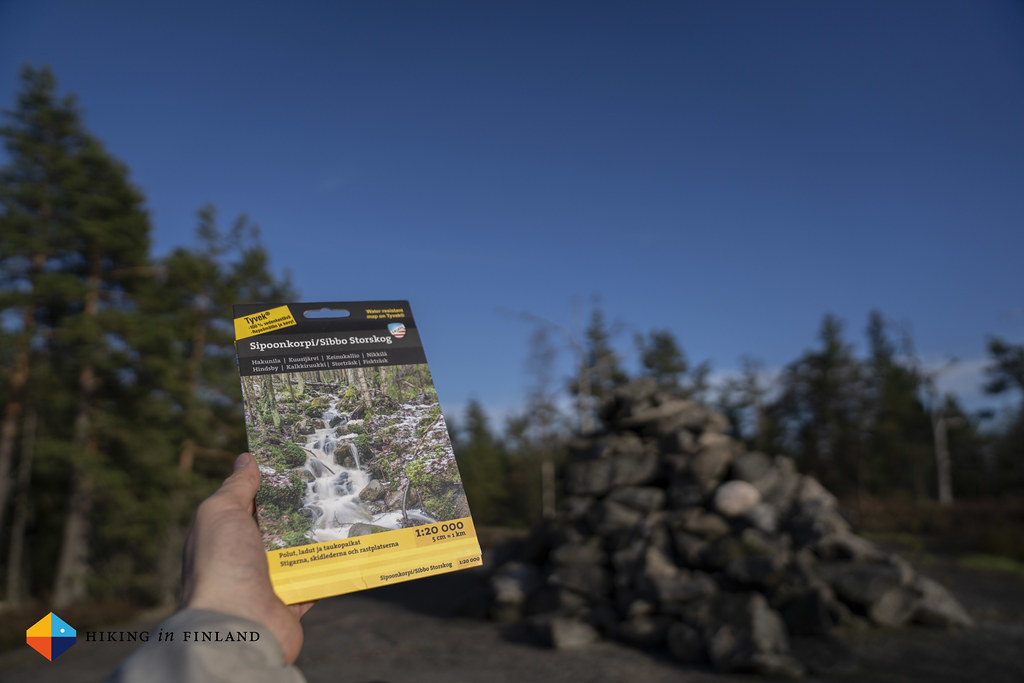 How to get there & what you need

I took Bus 717A from next to the Helsinki Railway Station to Sotunki, Google Maps or the Reittiopas Website are recommended to find the times when the bus goes and see where you have to get off (which is Kalkkiuunintie and should be displayed in the Bus, too). From there follow the sign which says Trollberga and Traktori- ja Konemuseo and after around 250 m you’ll see the blue Sipoonkorven Kansallispuito sign above. From the bus stop the complete nature path is around 8 km in length, and you can hike it either direction. A water bottle and some snacks are recommended for a day trip, if you want stay for the night bring a mattress, quilt and bivy which are appropriate for the season, and possibly a tarp or tent if you do not want to stay in one of the lean-to shelters. Questions? Ask me on Twitter of Facebook!

How much did you spent on your last piece of outdoor gear? And how much did you support your favourite blogs in the last months? If you enjoyed this trip report & video buy me a coffee - I work Full-Time on Hiking in Finland to bring you inspiring trip reports, in-depth gear reviews and the latest news from the outdoors. You also could subscribe to the rarer-than-ever Newsletter and follow along on Instagram, Twitter and Youtube for more outdoorsy updates!