Finally I find some time to get a review out about the gear I used on the last trip, or in this case, since a lot longer. Back in September 2009 I got a nice package of Woolpower gear, and I have been wearing the contents ever since. 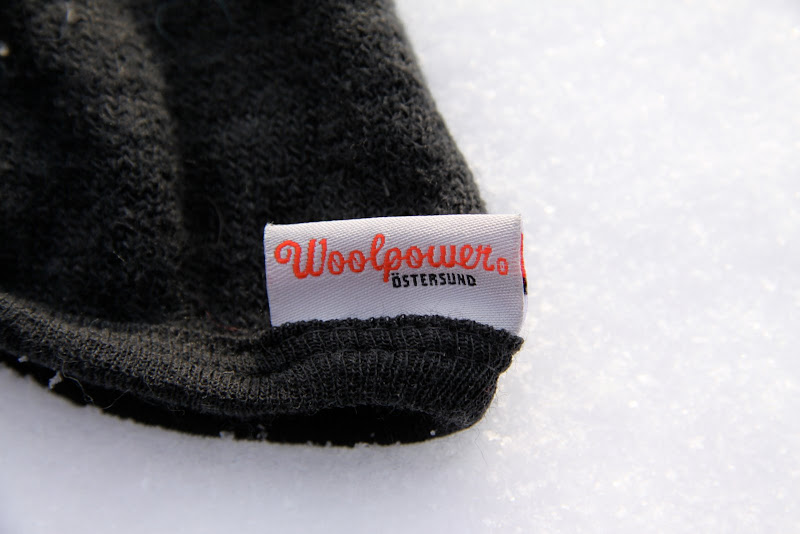 From Sweden with love.

The package contained a merino baselayer in 200 g/m² quality, consisting of a long john and a crew neck, as well as a pair of socks in the 400 g/m² quality. I have worn them since it got colder on every trip, sometimes to sleep, sometimes during the day, or as on the last trip, 24 h (ok, minus Sauna time =) for the whole six days we were away. I actually like it so much that I wear it also in daily life, as I don't belong to the segment of hip fashion folks who put looking good over being comfortably warm.

So what is there to report on the "Woolpower Merino Awesomeness"? Well, as you might know, merino doesn't smell. If you're only out for a night or two, that's an issue you can neglect, but if you're on the trail for more than that its good to know that once you come back into civilization that you're not smelling like crazy and people will walk a big circle around you. I have used synthetic baselayers, but since going for merino I will not look back, the no-smell factor alone is a winner for me. But there is more which speaks for merino, I find it is comfy on the skin and its obviously very warm. I do sweat quite a bit, summer as winter, so the warming while moist properties (Hygroscopic it's called) of merino are a further benefit which speak for it. 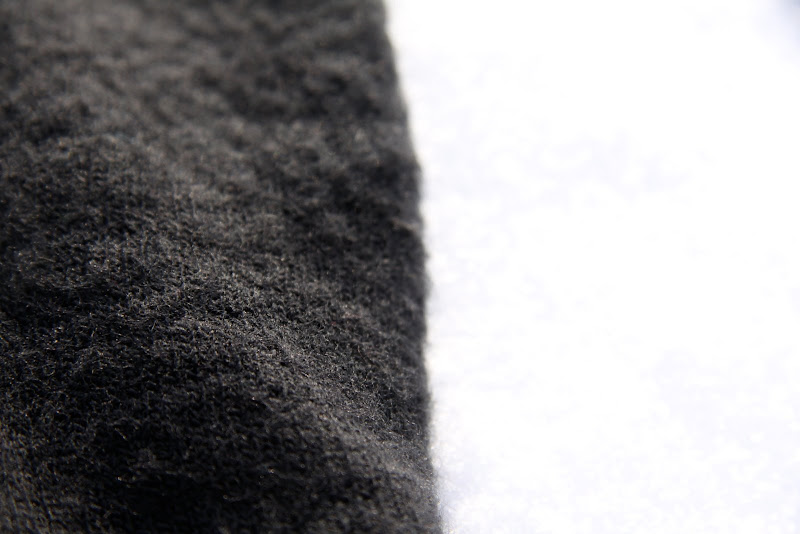 Outside of the Ullfrotté material.

However, and now comes the big twist, Woolpower garments are made of an material called Ullfrotté. Its basically a mix of merino with polyamide/ polyester and air. Yes, air. Like in the air we breath to stay alive. The secret is that the garments have a lot of what are called terry loops on the inside, and these are very lofty and thus trap a lot of air. Air is the thing you want to have around your body, as it retains your body heat, and Ullfrotté helps you with retaining that body heat. What is also nice about the Ullfrotté material is that it's Öko-Tex certified, which makes my environmentalist heart beat faster =) And being a mix of merino (usually around 70%) it has all of the above listed benefits. 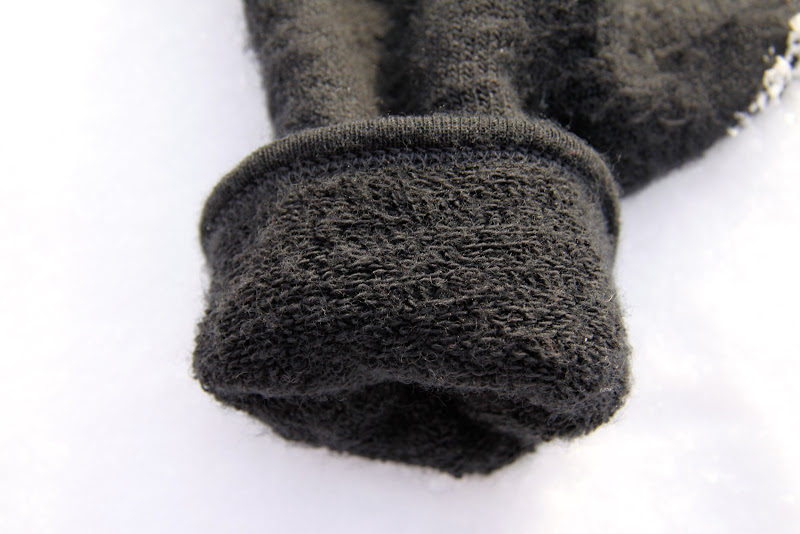 Close-up of the terry loops of the Ullfrotté material, this is how the inside looks.

But where there is light, there is also darkness. The Ullfrotté material doesn't like velcro and similar materials, so keep it away from them velcro straps at all costs. Which I find easy as I really don't like velcro. And yes, that's honestly it if it comes to not so awesome things to say. 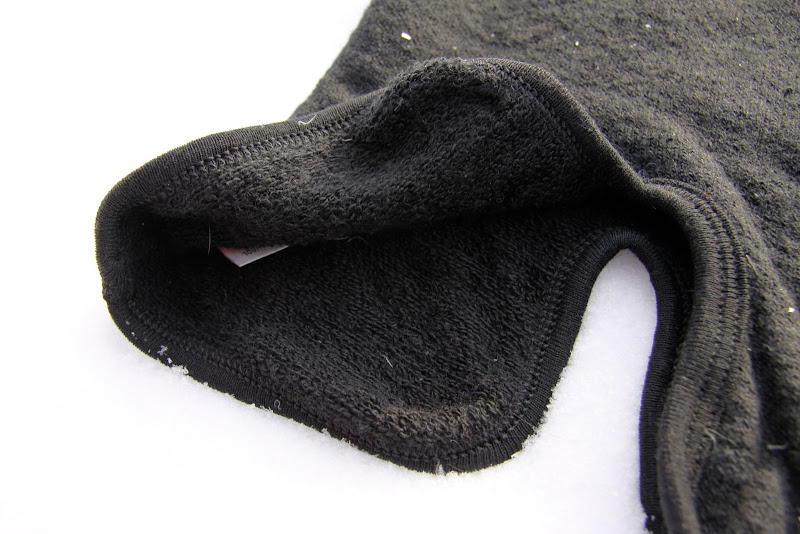 Another example of the terry loops and the outside. 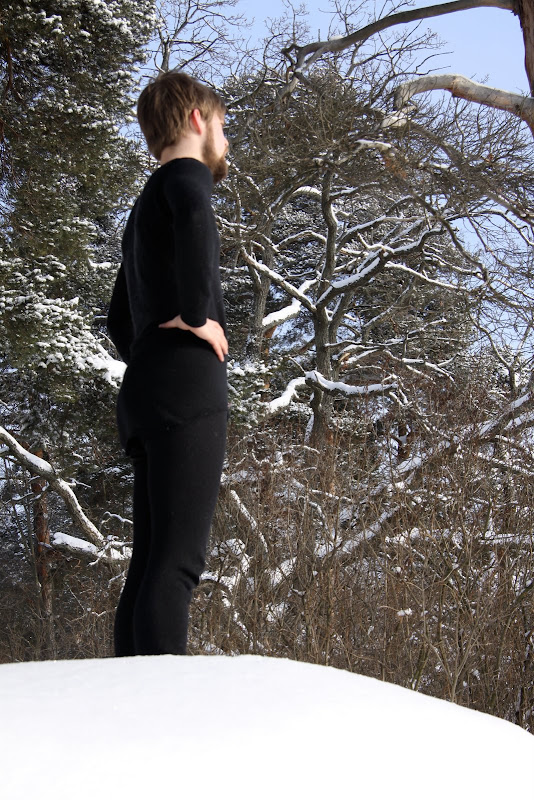 You can notice the long cut of the crew neck in the back.

The long john weighs in mere 161 g in Size S. The legs have wide cuffs at the end, and on top you have a fly in case nature's calling. The crew neck is 173 g in Size S, and has the previously mentioned long cut back. It helps to avoid gaps between the two layers and also to keep your buttocks warm when you sit down. I like that. What's very special about the garments is that they are made in Sweden and that each garment has a label, which besides the washing instructions and size, bears the name of the person who made the garment. So for example my crew neck is made by Eleonor Lubell while the long john is made by Irene Wilhelmsson. In times of globalization where many companies produce in the Far East under very dubious conditions, I find this extremely praiseworthy and a great initiative of the Swedes. 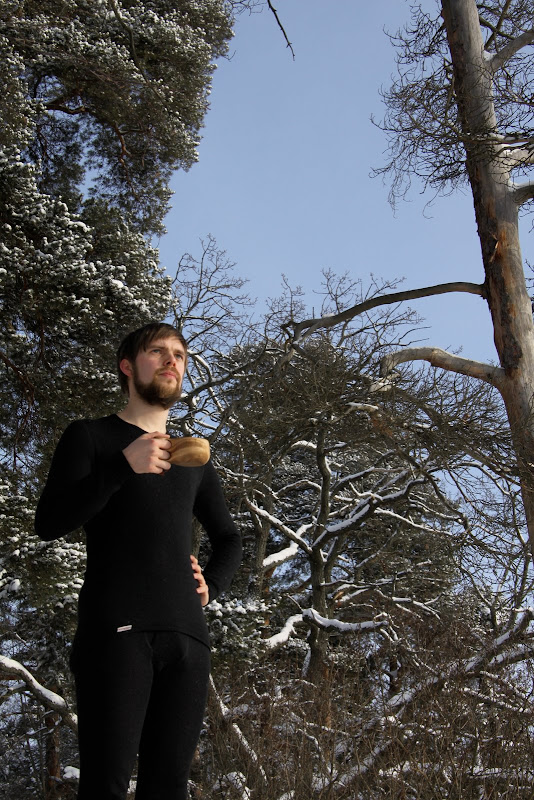 Morning coffee in the sun.

I was so convinced of the Woolpower garments that for the winter I decided to get a pair of mitts, a balaclava, as well as 600 and 800 socks so I can dress in the Ullfrotté loftiness from top till bottom.

The mitts are 400 g/m² material, and are actually two mitts in one. I find them too warm when walking and only wore them in breaks or at camp, or while we were building the igloo. They kept my hands warm and dry, even without the eVent mitt I ordered to protect them. At 108 g for the pair they have an unbeatable warmth-to-weight ratio, if you have stood outside in the wind by -17°C there's nothing better than putting your hands in these mitts. 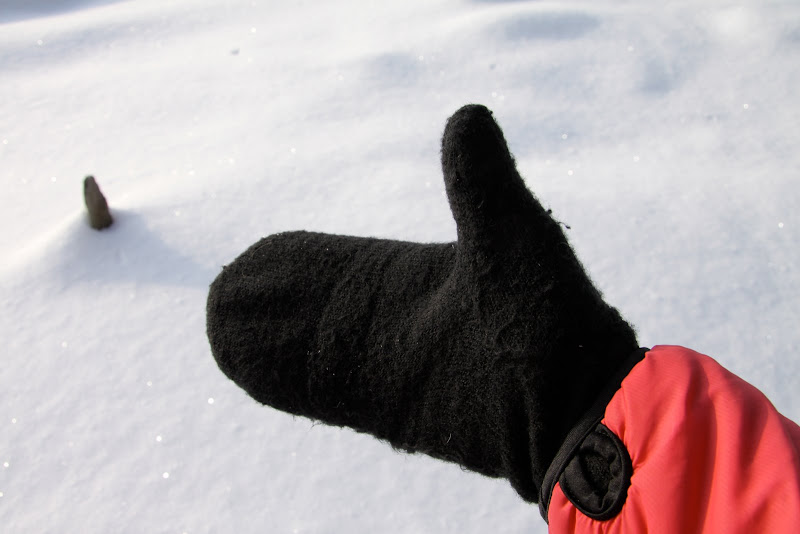 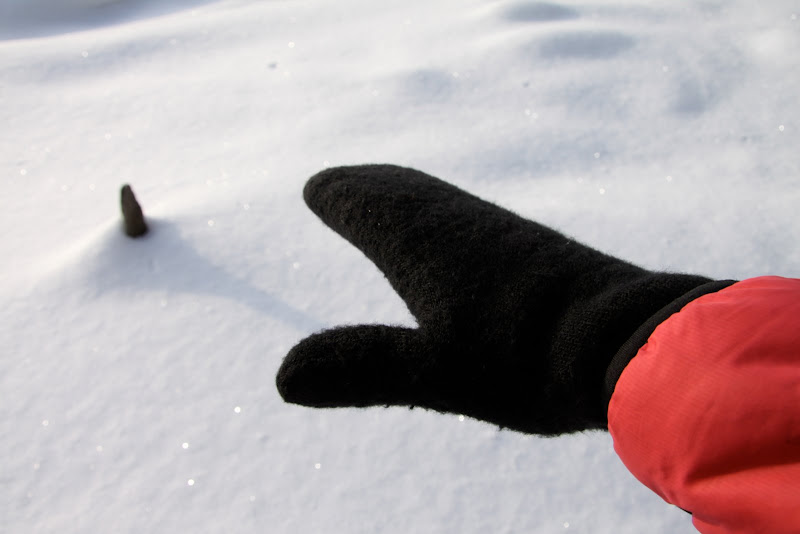 The balaclave is also of the 400 g/m² material, and again it was too warm for me to wear during the day (I run hot very easily). I wore it thus for sleeping, and again it kept me warm and comfy during the night. The 83 g it weighs I carry with gusto during the day, knowing that in camp and at night my brain won't freeze. I have tried to wear it on my training snowshoe trips when we had around -14°C and it was very windy, but still then its too warm so that I switch to my merino buff. The opening for the face is variable, you can either look like a ninja and only have your eyes free, or you can pull it down under the chin and look less dangerous. Down the neck it has two long flaps, which I usually put under the crew neck to avoid any exposed spots. 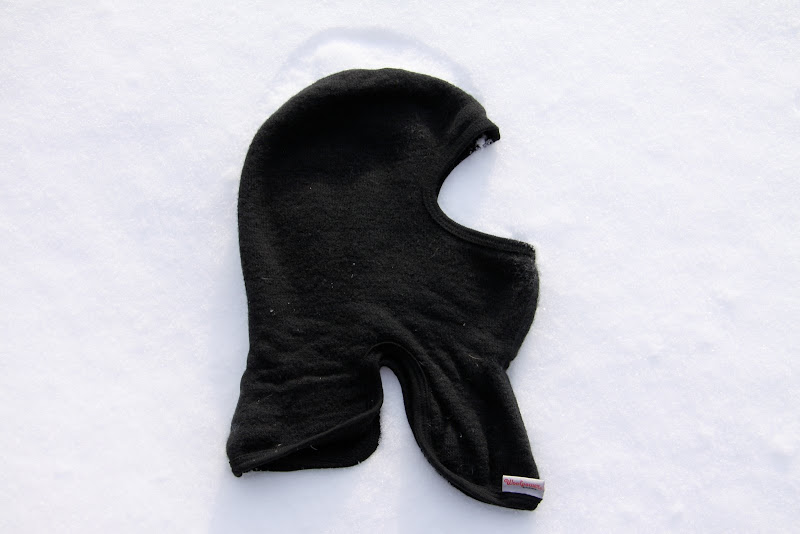 The socks weigh 72 g for 400 g/m² pair, which I wear from spring till autumn. The 600 g/m² socks are my day socks in winter (night socks in the summer) and bring 116 g on the scale, and I wear them together with a pair of liner socks which are 38 g for the pair. At night in winter I slip into my Woolpower 800 g/m² socks, and those are 184 g for the pair. I might update the post later on with a photo of all the socks, but this morning I didn't feel like walking barefoot in the snow with -11°C.

If I now sparked your interest, you can check the Woolpower site for a dealer near you. In Finland you also could go and visit Retkiaitta in Helsinki, they have it on the shelfs. Finally, if you're a shop in Finland looking to carry Woolpower, contact the nice folks at Berner Sport who will help you sort out getting the gear in your shop. 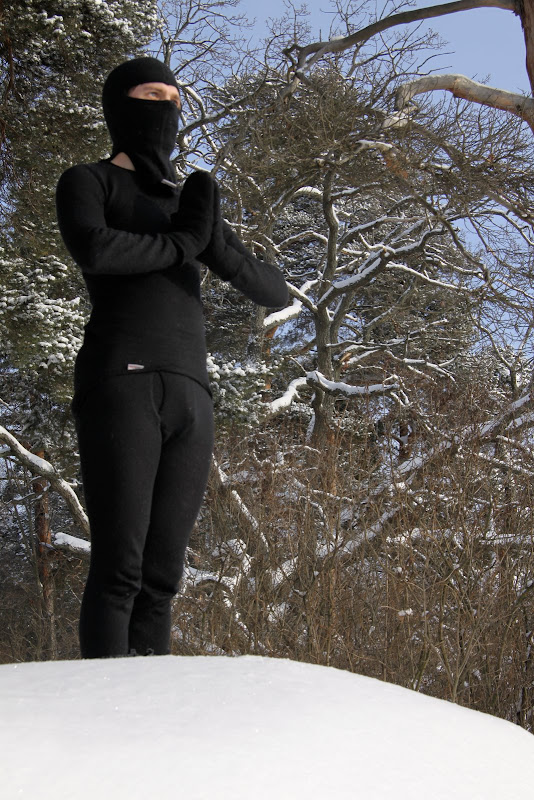 The Woolpower Ninja thanks you for reading this far.