Time flies if you're busy. Imagine running your own business, studying to become a wilderness guide and keep on top of other things as well. Yeah, you'd be mighty occupied. Well, I knew it wouldn't be easy from the start, so I don't complain. I will continue in the previous style and shortly tell what we did in the last weeks, and then talk a bit more broadly. 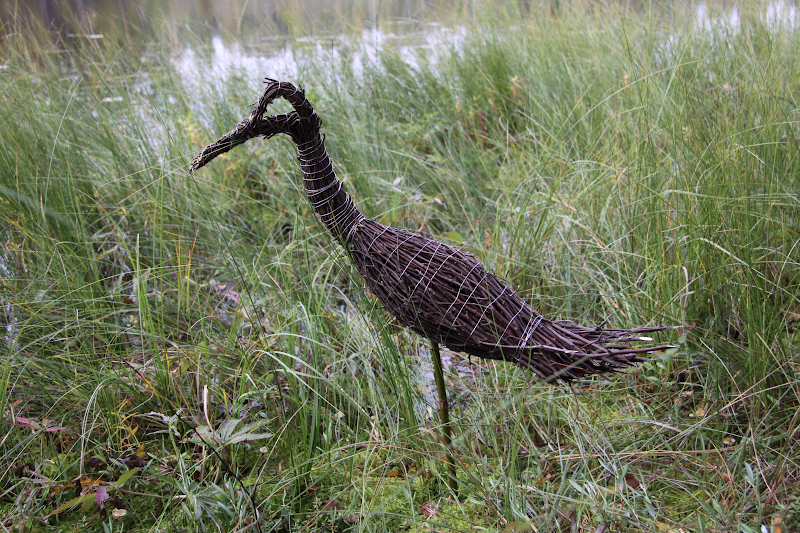 Week five was a nice week again, we had the most excellent teacher who taught us traditional wilderness skills, like making a willow frame backpack, a raft for crossing rivers and lakes, hunting spear and throwing arm (can't remember the name), traps like you can see on the above photo, and also we made wobbler, which I enjoyed heaps. The teacher is definitely the best one thus far, I like his humour, style of teaching and how he treats the students. We also collected a good five dozen different mushrooms at the end of the week and identified them.

Week six we did a First Aid 1 course. It was OK, I personally would have expected more, it was fairly relaxed with too much breaks for my taste. But we learned practical skills and some theory, so all is well. Finnish education is after all usually just giving you a brief taste of something and expects you to study more in-depth yourself. We learned about knots and ropes also, and did some orienteering exercises - day and night. A brief excursion into how a GPS works rounded out that week.

Week seven and eight we were in Russia, our first of four expeditions. 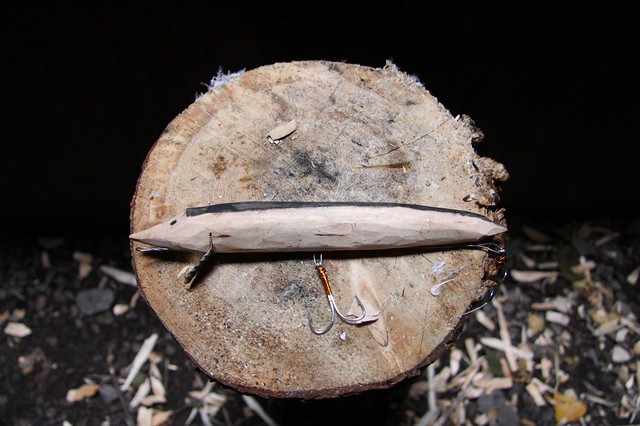 Back from Russia we had our First Aid 2 session over two days with an exam (Passed), and also feedback on the expedition. The feedback session itself was too short in my opinion, there was more to be said but we were cut short and did something else. Week ten was the autumn holiday week, so nothing much happened =)

Week eleven then, we had our orienteering exams - day and night. I failed the night examination as I wasn't able to locate the final flag, even if I was at the right spot. Discussing doesn't help passing exams, though, so I will need to do it again. Day orienteering exam was passed without problems. We had our first Hygiene Passport lecture, as we might be handling food for customers this is a legal requirement for anyone working with food in Finland. Another very good teacher, though the subject itself can be passed by using common sense. A visit to Tampere and a museum visit to an exhibition about Bears concludes that week. 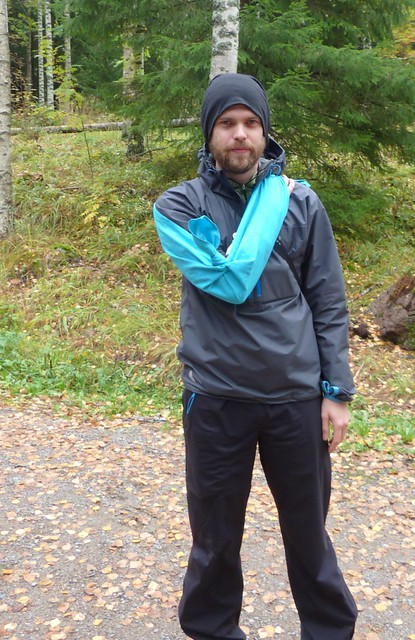 In the twelfth week we had another Hygiene Passport lecture, learned about all kind of different sorts of hunting in Finland, identifying tracks and droppings of animals and how foreigners (think possible customers) can hunt in Finland. We had our first nature knowledge exam, in which we needed to identify thirty mosses, lichen and mushrooms - haven't heard anything about it yet, though I think I passed.

Week thirteen we then had the Hygiene Passport examination (Passed) and learned about snowmobiles - how they work, theoretical fixing, different models, traffic rules for them, etc. Each student is part of one organization group, and I am in the Bear Ski group, which plans the solo ski expedition in April 2011. Together with my three group mates and the teacher we met, got briefed and shared tasks.

That weekend we were having the annual IWG Meeting, in which the current students prepare a weekend with lectures, activities, food and drinks et al. for the Alumnis. A great way to meet fellow wilderness guides, make connections and get tips. It was a nice weekend, even if I was sick. 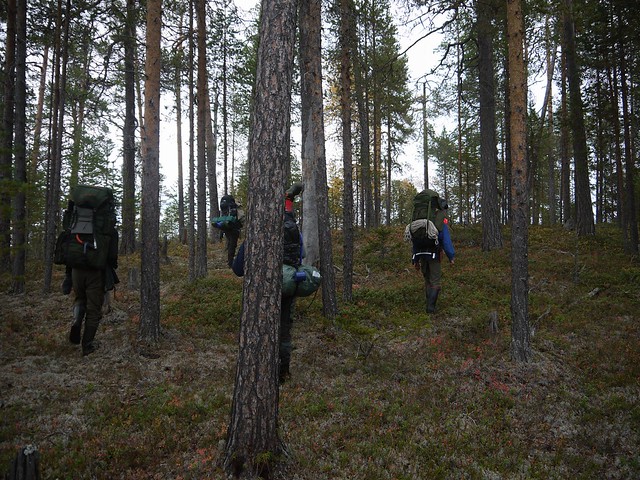 Week fourteen and fifteen I was sick - I had a bronchitis already since two weeks and didn't sleep well, coughed all the time and there was no sign of it getting better. So the doctor told me to stay at home, while my classmates forged their own puukko knifes - something I am quite disappointed to have missed - and the other week they learned more nature knowledge. 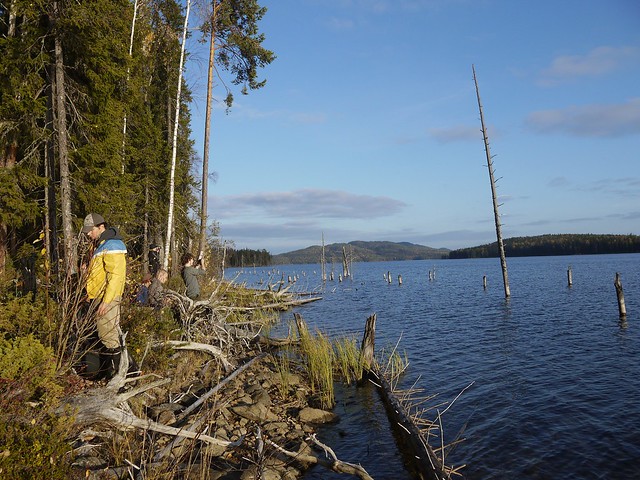 So that were the lectures. I should be doing an internship for three weeks now, but because mass tourism is not my cup of tea (I hate it) and tasks like cleaning husky kennels and taking tourists on a two kilometer sleigh ride to see Santa and back are not what I plan to do in the future, I skipped this. In the spring I will be working for a bit over three weeks at a great, little company called Upitrek. It is great because the clients ski/ snowshoe/ hike/ paddle so it is a natural way to be in nature (versus sitting on snowmobiles, for example). If you're not sure yet what you gonna do in February/ March, check their trips and maybe we will see!

Off to the other things about school. Social skills are key. The teachers seem to pick their students to be as different from each other as possible, so you get a very varied mix of classmates. Before Russia tempers were often running high, but that first expedition was great in building camaraderie and team spirit among our group. The thinking here seems to be that we as a guide need to be able to handle very mixed and difficult groups, and we best learn that by being in a very difficult group and learn to lead them. I think it is really nice to see how we now look much more out for each other and work better together, and it is a on-going process.

Living in Kuru. It is a 2900 people community, has two supermarkets, a library, one gas station, one pharmacy, one café, one lunch restaurant, one bar & pizza place, another bar, a hardware store and a fleamarket. It is in the middle of the forest next to a big lake great for fishing, and the people in the village are (in my perception) friendly and helpful (the people in the shops speak perfect English as nearly everywhere in Finland, so no worries if you don't speak Finnish). The student dormitories are 95€/ month and you get a room which you share with another person, each flat has four such rooms so it is crowded. The eight persons share one kitchen, one shower and two WCs. If you have hygienic standards, you might want to leave them somewhere else if you move into the dorm =)

Anyway, I was living three months in Kuru, driving there on Mondays and back on Fridays to Tampere to be with my partner and in a more peaceful environment. As I was higher-than-average sick while living in Kuru, and also missing my partner and home, I decided to move back to Tampere and will now commute in the next six months to school and back. This makes my days an additional three hours longer for the going-return commute, but for being at home that is a trade-off I am willing to take.

If you don't have a partner in Tampere, you're well recommended to move to Kuru. One classmate lives in a privately rented flat which is more expensive than the dorm, but having privacy can be worth that. Otherwise there's not much to say about Kuru - there is plenty of hiking around it, the town being pretty much in the centre of the Pirkan Taival Trail. There is pretty much every evening sauna (wood heated!) and you can go swimming in the lake/ ice hole, which is a definite plus for living at the school. 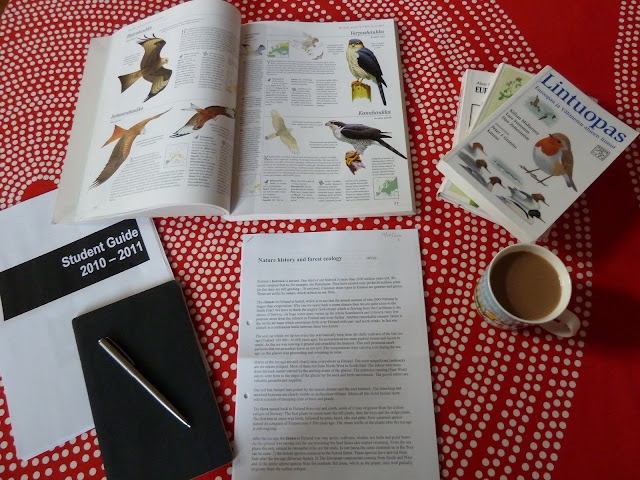 The teaching is OK. I am someone who likes fast, informative lectures without many breaks, so for my taste the lectures at IWG are too slow and have too much breaks - almost every hour a ten to fifteen minutes break and a one hour lunch break. It feels for me that the information could be easily disclosed in four hours instead of the seven to eight hours. Here the teachers try to suit the different styles in the class, there are pupils who like this long days with much breaks, so one needs to adapt and learn as the majority does.

What is positive is that the methods are very varied, so from a lecture over group work & practical stuff to giving a own presentation and planning an expedition, as well as self-study (learn five species a day!) and should suit everyones learning way.

The future, or where do I plan to do with this education. Those questions have been asked before, and I will continue to shroud myself in mystery until I am ready to announce it. It is going to be exciting news, be assured of that!

If you have additional questions, please feel free to ask.