Do I need a GPS Watch? was the first thought that went through my head when Garmin asked me to try their latest creation, the fēnix. Curiosity got the better part of me, and over the past twelve months I have enjoyed having this multifunctional gadget on my wrist. 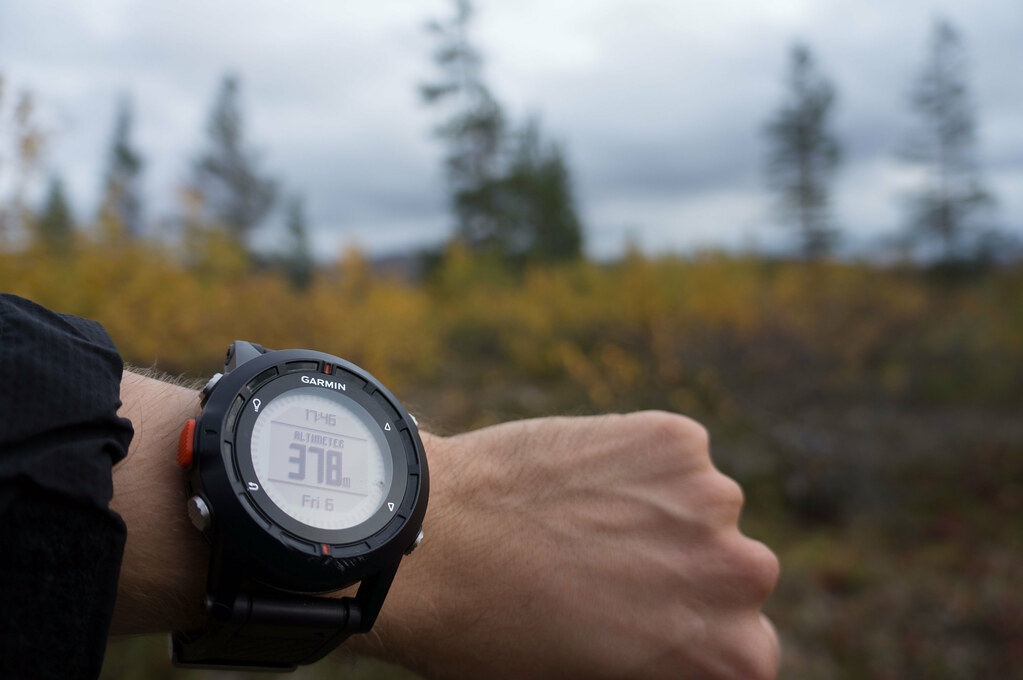 The fēnix arrived in October 2012 and has been on every hiking, backpacking, climbing and skiing trip in the past year with me. Additionally I wore it when trailrunning and also occasionally as a watch when I didn’t want to carry the phone.

Where to start? The fēnix’s most basic function is to let you know what time it is. But then there’s a long list of other stuff that it can do - as you can see under features. The most useful I found to be the compass, thermometer, altimeter and the speed/ distance measurement. Which means you can use this watch also for navigation and keeping track of where you went. In combination with the Heart Rate Monitor you also can measure your heartbeat or pulse, which is great for working out. 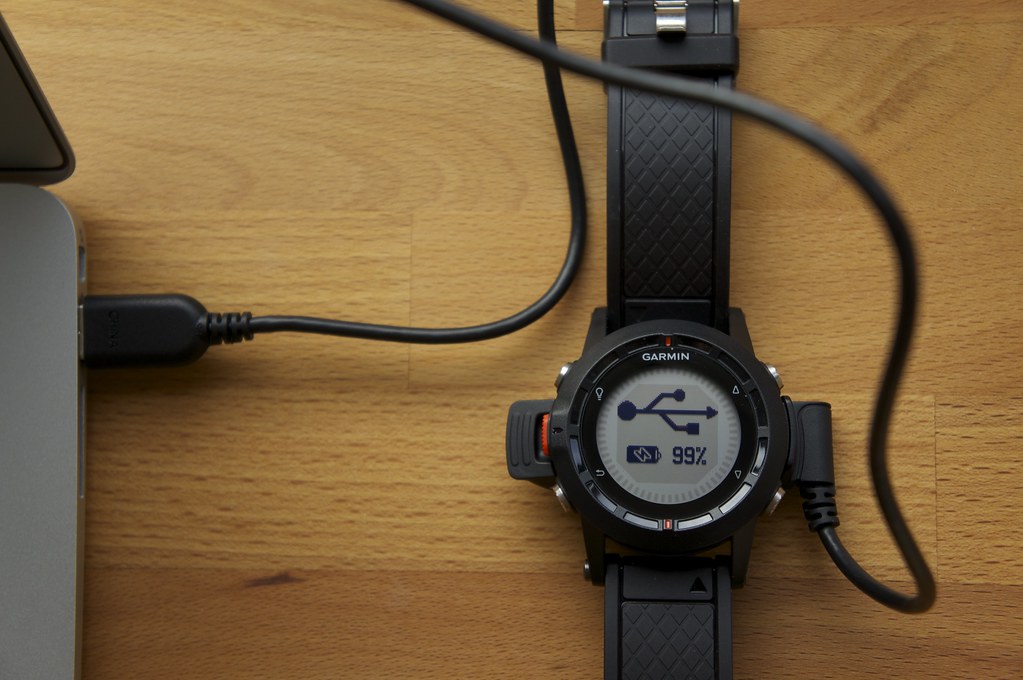 The fēnix packs a massive amount of function in its small housing: 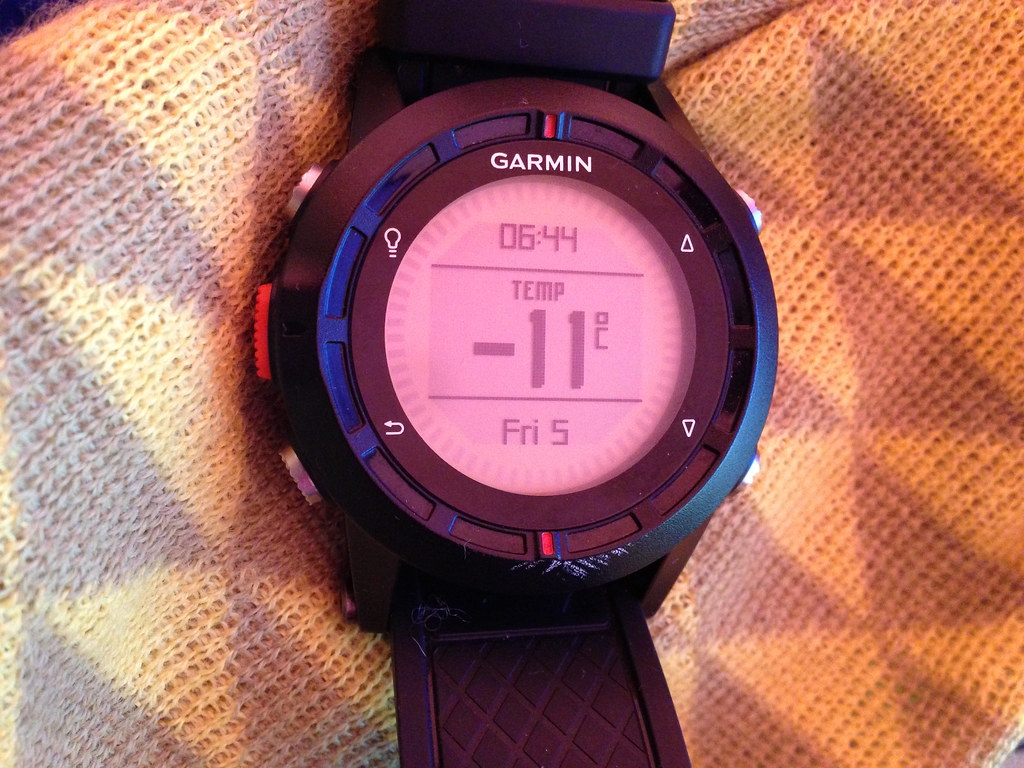 I have very thin wrists, but the fēnix fits me surprisingly well - better than my Suunto Core. It doesn’t feel heavy, though after a couple of days out I like to get it off, clean it and my arm a bit - some grime and sweat collects on the back so it’s good to clean it and then put it back on. It does also not bother me when wearing it, though it can get into the way if you wear gloves or many layers. If that’s the case I usually just put it on on top of the jacket, that way I also always have the watch ready and don’t need to dig for it.

To be able to pack this amount of technical functions in such a small package, on your wrist, is an innovation. 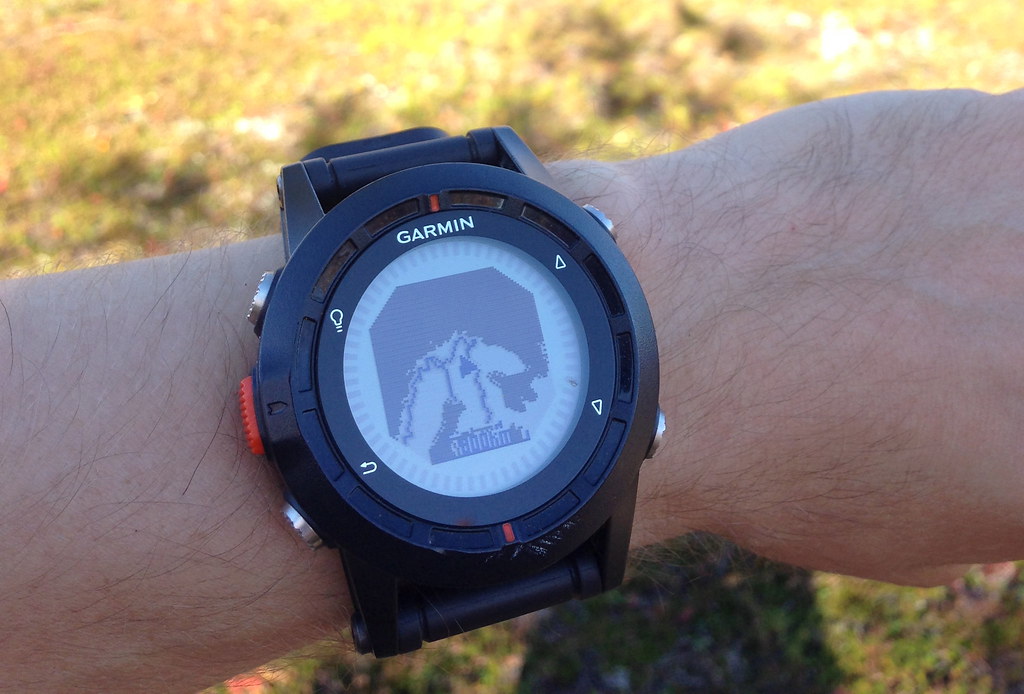 The build quality of the watch is excellent. It has seen a fair amount of bumps, rock contact, been swimming, and laying in the snow at low temps, and has been working flawlessly at all times. It’s rugged but at the same time stylish, so you can wear this when you go to the Banff Mountain Film Festival, no question!

The fēnix weighs 84 g all in. Maybe some weight could be saved by using a thinner/ lighter band, though for me it was good as it was and didn’t bother me when outdoors.

If you check out Garmin’s About Us website you’ll find a page on Environmental and Social topics, including conflict minerals and how to safely dispose of your Garmin product. That should help you to find out how to recycle your fēnix if you don’t need it anymore. 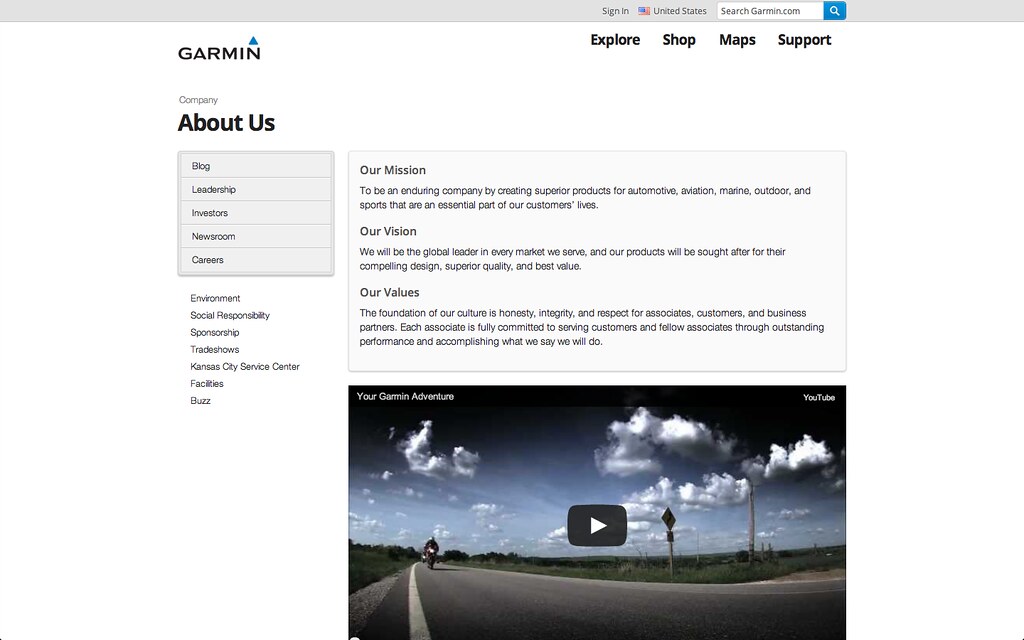 If you buy a fēnix the first thing you should do is download the Manual as the included Quickstart Guide isn’t enough. It really just gives you the most basic overview of the watch, but as it packs so many functions you really want the manual to find out the things you need. You likely also need to update the OS once in a while, so you might as well download the Webupdater and a few of the other free Garmin Apps so you can start right away when you unpack the watch. The USB connector, with which you also charge the watch, is very good (and 34 g light) and easily connects to the watch. 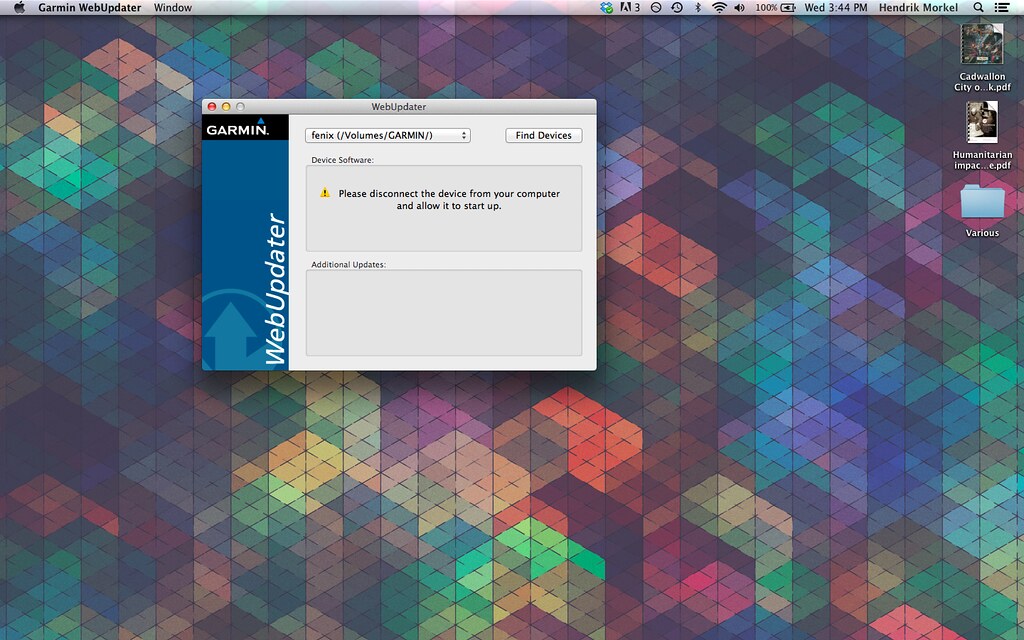 The fēnix is compatible with Strava and you can send your activities to the service and share them easily with your friends, which in the days where everyone seems to be enjoying these kinds of things is a nice feature. It’s fairly straight forward - plug in the watch via USB, visit the webpage, and let it import your activities. Muy bueno! 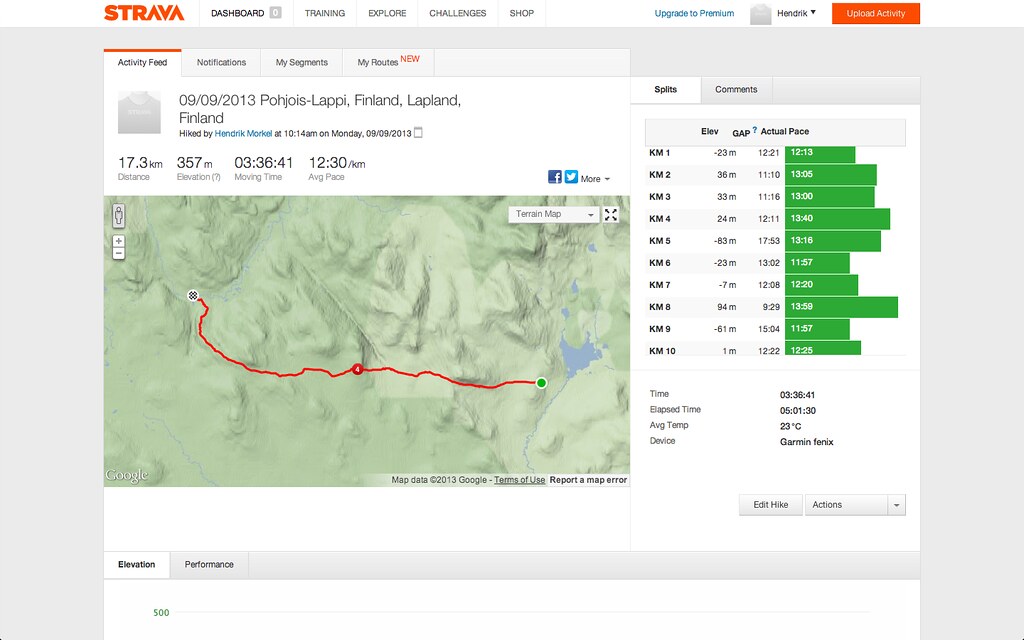 Another option to dump the data you collected is Basecamp, Garmin’s own software. While this software is free (Yay!) to actually being able to use it to plan routes you’ll need to purchase the maps for your region (nay). As these cost between $50 and $190 per Region for Finland, I didn’t use it that much so I can not comment in detail on Basecamp. It’s fortunate that you can also add points & routes on the watch itself, though that does get quite fiddly. On the other hand you have Garmin Connect & Garmin Adventures and the free iPhone Apps which provide Google Mapping, so I don’t get why Basecamp does not have that - sure, Garmin wants to earn money with maps, but if you spend 400€ on a watch which wants to be used in the wild, it would be great if at least the Basecamp map for your region, or Google Maps, would be available in Basecamp.

Which brings us to the Menu. As an OSX & iOS user you could say I’m a bit spoilt - these operating systems are pretty intuitive, something I can’t say about the OS of the fēnix. There is layers and layers in the Menu, and finding out at the beginning what is responsible for what - especially if you want the GPS tools - is only really easy after you consult the Manual. However, after you have used the functions you needed for a couple of times, and have maybe played around and scrolled through the Menu, it gets easier and then using the watch is a lot more straight-forward than when you have it new. All the basic information on the other hand are death easy to view: You use the up and down buttons on the right to access the compass, altimeter, barometer, see the temperature, your heart rate if you wear the HRM belt and possibly the time in different time zones if you have set these.

The fēnix offers plenty of options for many different outdoor needs:

And much, much more. It really packs a lot of functions, though for backpackers, trailrunners and alpinists the ABC + GPS functions are probably most useful. I have used the fēnix for navigating in the wild, though I use it in combination with a compass and map to get the bearing and then use the compass of the watch to follow it.

Lets talk about finding satellites: You should, depending on where you are, give the fēnix some time to connect to them. This will not work when running in the forest, but if you’re stationary it usually finds them in a few minutes. If you pause the tracking, and then start it again, it usually is connected in seconds again. But running + forest, hmm, no luck. So start the GPS in time and all is fine. 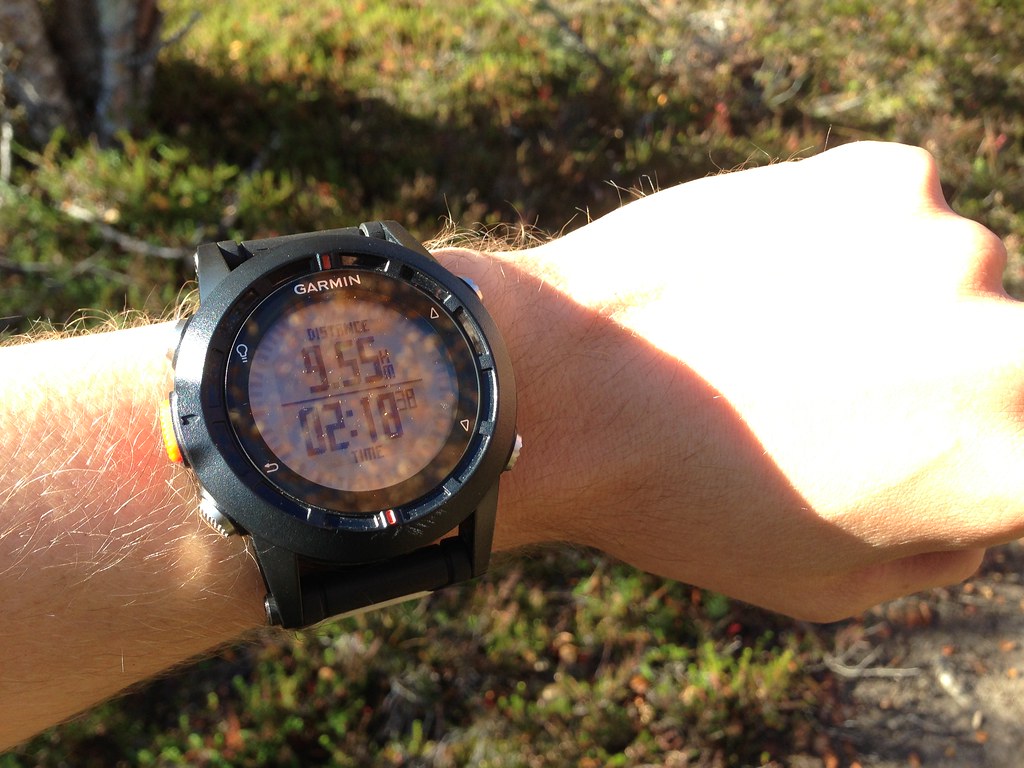 The GPS is nice, and also will suck your battery empty in hours. In the winter at -13°C I could track about 30 to 40 km of snowshoeing with it before it started to tell me that it’s running low on battery (that was at 20%). So in the winter I reckon some 16 hours of GPS use are the maximum, in warm temperatures some more. If you use just the basic ABC functions (so no GPS) the watch will be fine for a couple of weeks before it needs to be charged again.

Very nice for trailrunners, joggers and fitness people is the combination of fēnix and Garmin Heart Rate Monitor. It was the first time for me to use a HRM device and it’s pretty exciting to see how your fitness increases during your training - where at the beginning I’d get to a 185 BPM when trailrunning I am now down to 150 BPM. I also used it during my Swiss SUL trip and it was a great way to track that adventure and see the combination of speed, ascent, descent and heart rate.

Finally, also a plus is the large display which reads very well during activities and at night, the illumination is splendid as has a nice blue light which is easy on the eyes in the dark. 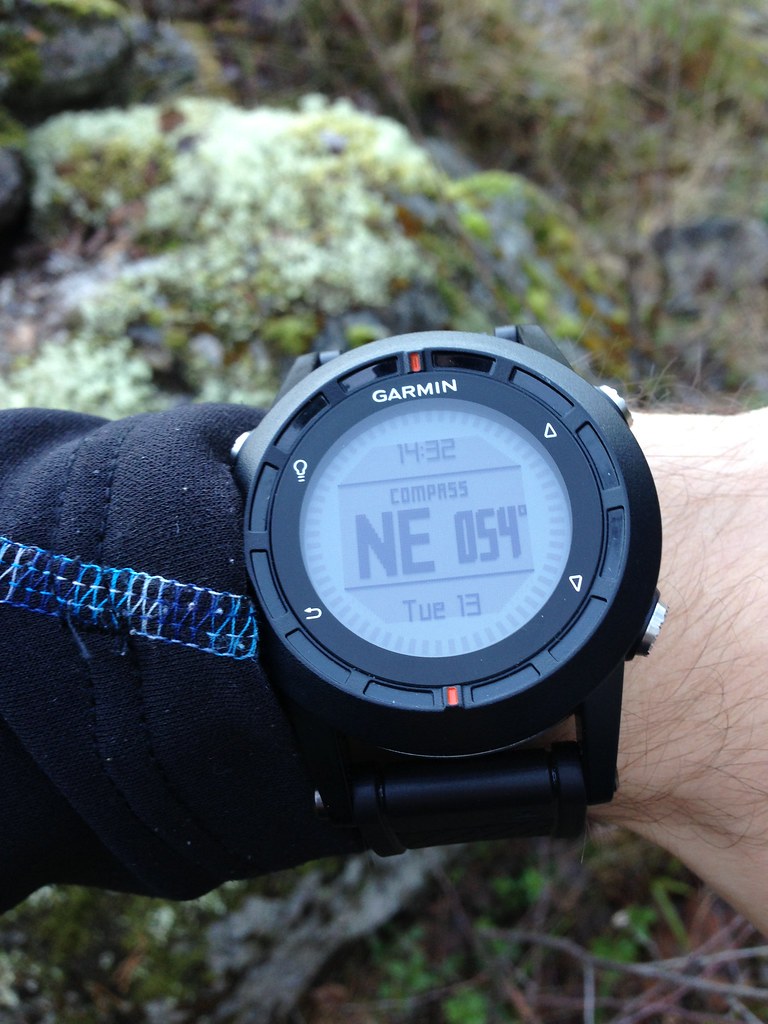 Yes, there is one direct competitor: The Suunto Ambit (2). The 2nd incarnation packs a lot of the same functions as the fēnix but is heavier.

Lee gives it 3,5 Stars, DC Rainmaker reviews it from a running POV with over 13.000 words and Travis reviews it in a video.

Well, do I need a GPS Watch? I’m still not 100% certain. I pretty much never wear a watch in everyday life as my phone can tell me the time. Comparing it to the phone is actually quite apt, as they both have a similar feature set - although the fēnix does offer much better ABC functions and a GPS which works far away from phone towers, so in the wilderness.

And that’s where it ultimately was used, and liked, and needed for me. On my UKK tour I used all the features useful to backpackers: GPS Route tracking, thermometer, altimeter, compass, and sunset & sunrise times. It’s rugged and takes a beating and you don’t need to be afraid to bump it somewhere, but at the same time does look good on your wrist.

Also on my trail marathon I had the fēnix with me and happy to have an easy way to check the time (because of cut-off points) and distance. And during training it was great to stop laps and see how I’m improving. When out on guided trips I often use the compass to check on the navigation of the clients while they navigate with compass and map.

So yes, I really do like the fēnix and feel I need it when going outdoors. The “basic” functions - for me compass, thermometer, altimeter and watch - are very useful, and the GPS functions are a superb extra to track routes, navigate to destinations, and TracBack. It can not replace compass and map on long wilderness trips - unless you charge it via a USB battery pack on the trail, which is easy and works well - but can replace a handheld GPS and/ or (smart)phone. So if you need a GPS + ABC watch, I can strongly recommend the Garmin fēnix.

Where to buy the Garmin fēnix 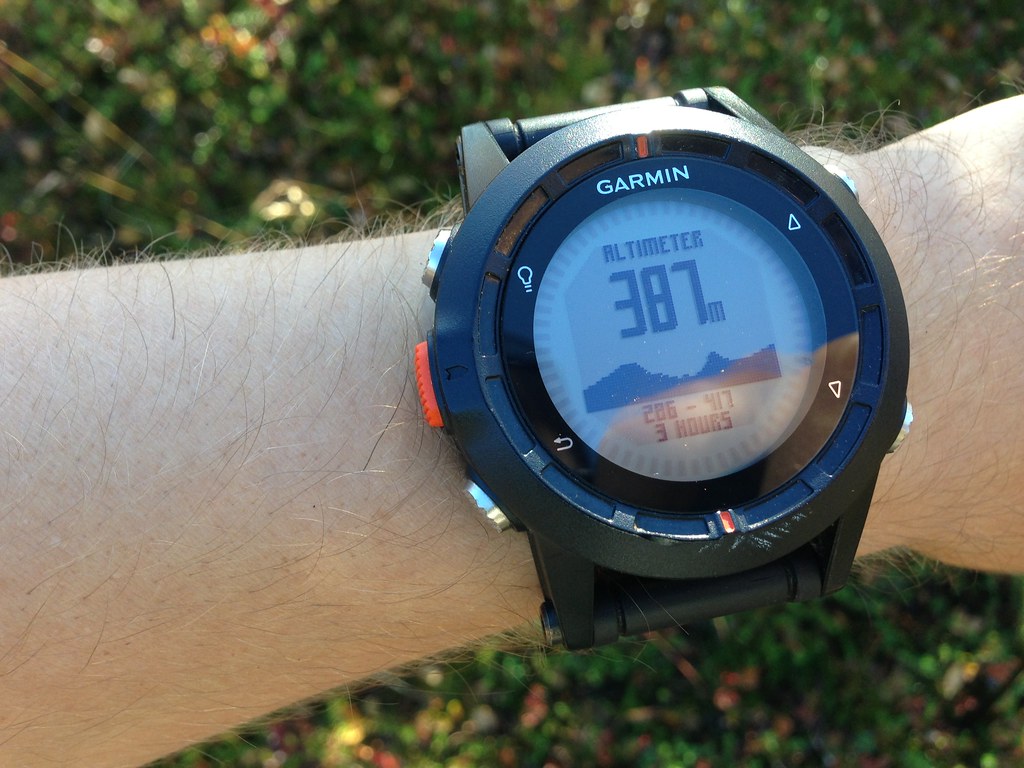