Kronplatz is known for its skiing and grand views on the Dolomites, but it also has a lot to offer when the snow is absent. Vincent and me visited it earlier in May and went paragliding, hiking and almost did a Via Ferrata! 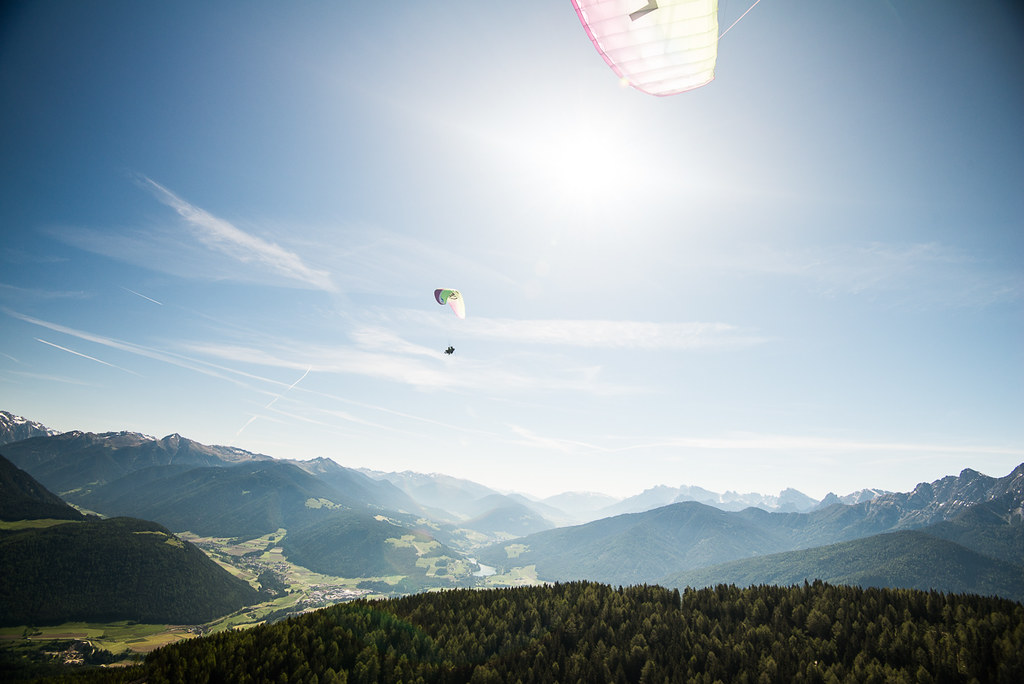 After an enjoyable journey to Bruneck in South Tyrol via München Airport it was time to explore the region. I had quite a lot of things planned for the three days I was there, but that first afternoon I was “free” and so just went for a stroll through the fields surrounding the Hotel Rudolf and checking out the Sauna. Well rested, it was off to bed early. 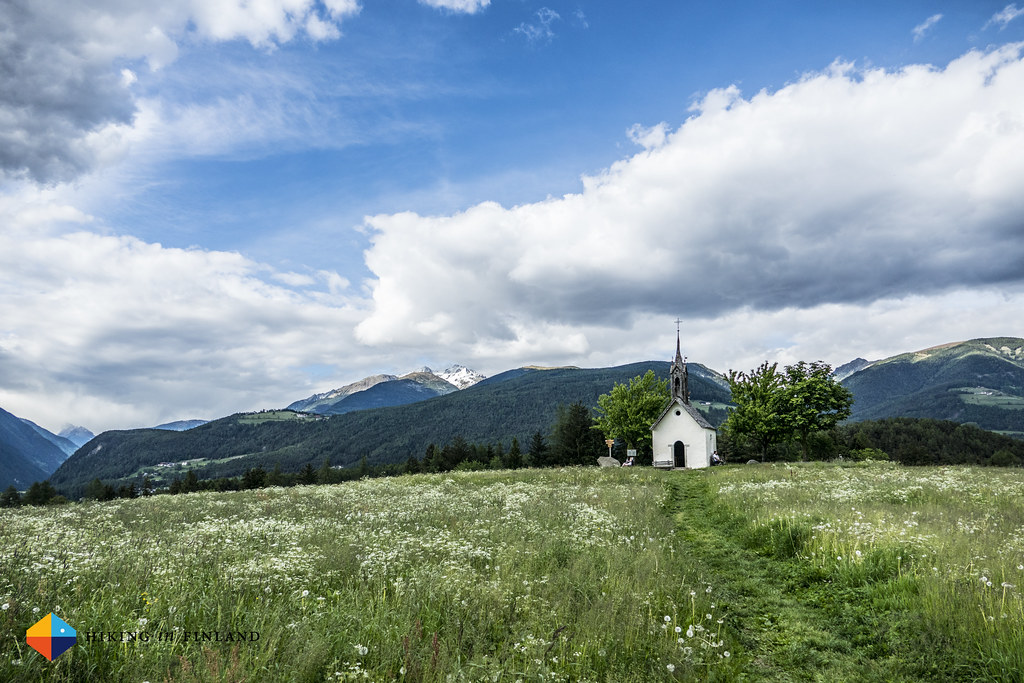 Or: Hiking in the Fanes-Sennes-Prags National Park. The Furcia Rossa Via Ferrata was the main reason for this trip, and Mountain Guide Matthias Larcher picked me up early in the morning. We got along well right from the start, both being dads and loving the mountains we had plenty to chat about on the drive to the Fanes-Sennes-Prags National Park. We arrived to an empty parking lot, packed the last bit of kit and then were off. The trail was steep from the start until we reached a high valley, where we hiked on nice wide trails to the start of the Furcia Rossa. 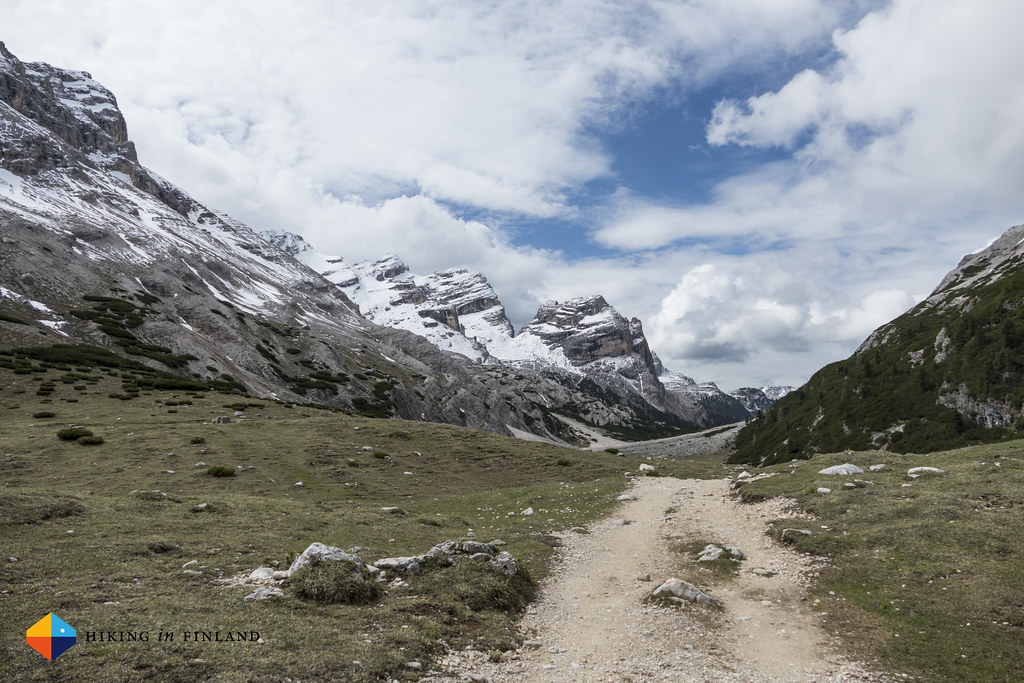 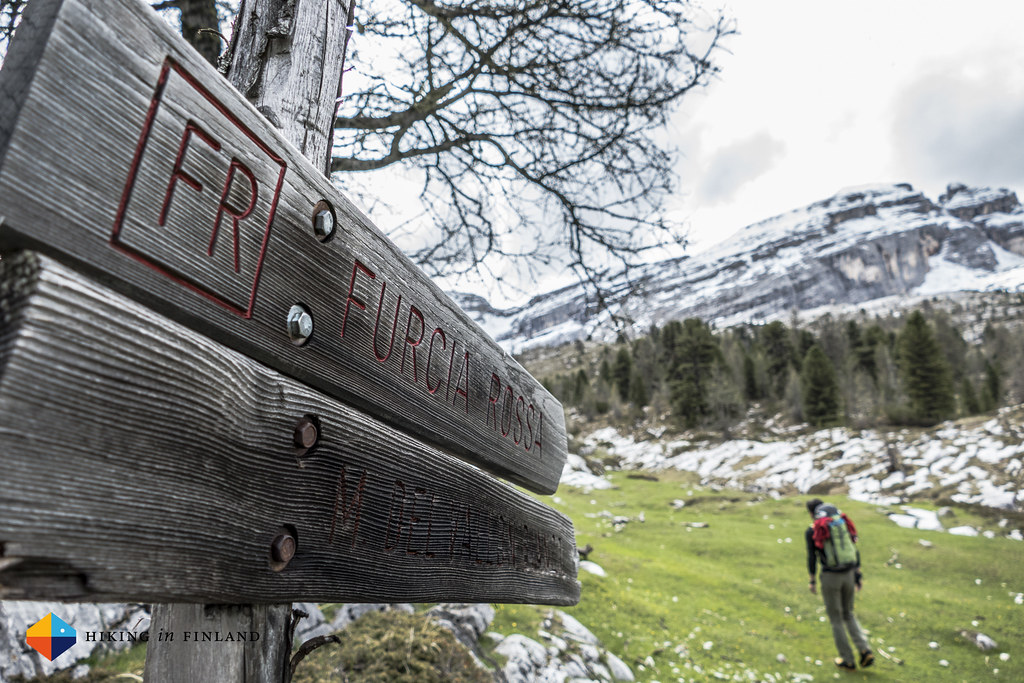 Snow had fallen up higher during the previous night, and Matthias wasn’t sure if we would be able to actually do the Via Ferrata completely. After we took a turn and followed the a sign to the Via Ferrata, we came across the first fresh snow patches. The higher we got the more snow there was, and while I was once again wearing approach shoes which had good grip in the snow, it looked like a not very smart undertaking to continue further up - Matthias thought the steel wires likely will be covered underneath quite a bit of snow, and while it is an easy Via Ferrata it is very long and takes a whole day to complete. 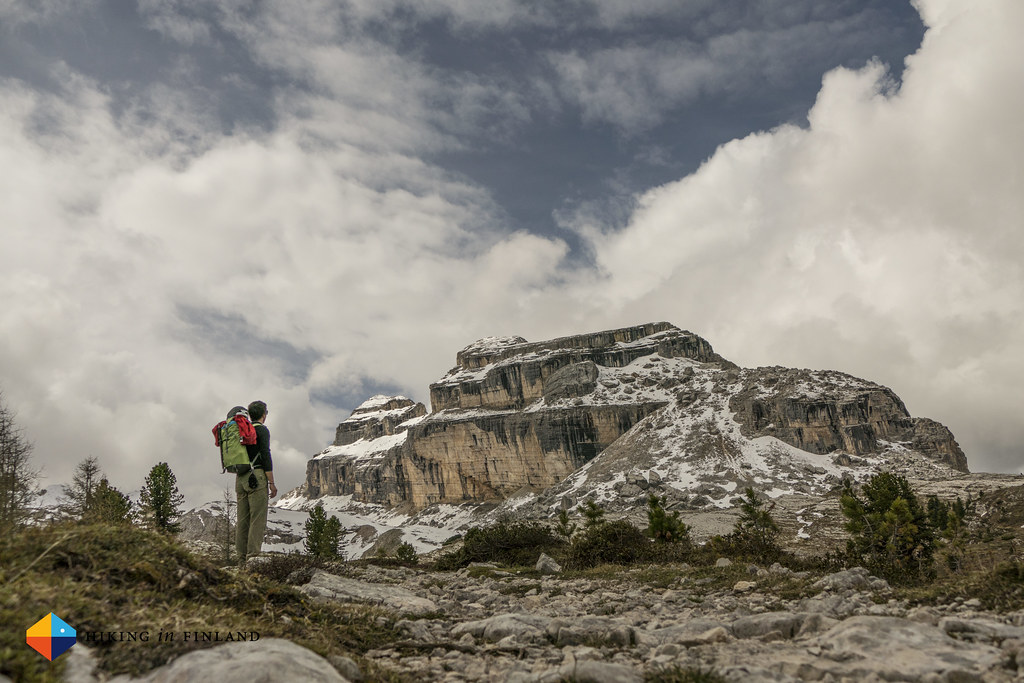 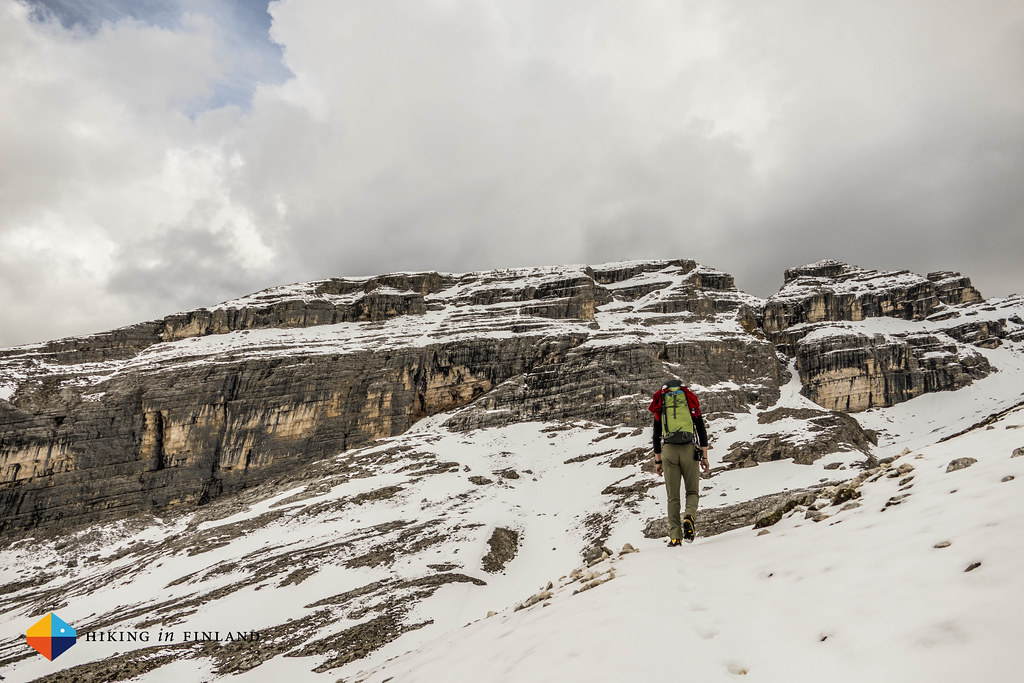 As the snow got shin deep and the weather looked like it will turn to the worse, we decided together to call it a failed attempt and just turn around. We had a wee lunch as we were back at the main trail, and then just enjoyed the lovely scenery which we had all to ourselves on this late May day. In the early afternoon as we were back at the car we had clocked in some 18 km and lots of nice views. Also the Fanes-Sennes-Prags National Park looked well off the beaten track and Matthias told me that while it gets busy in the main summer months, pre- and post-summer you almost can have the trails to yourself. Definitely a Nationalpark I want to check out more in the future. 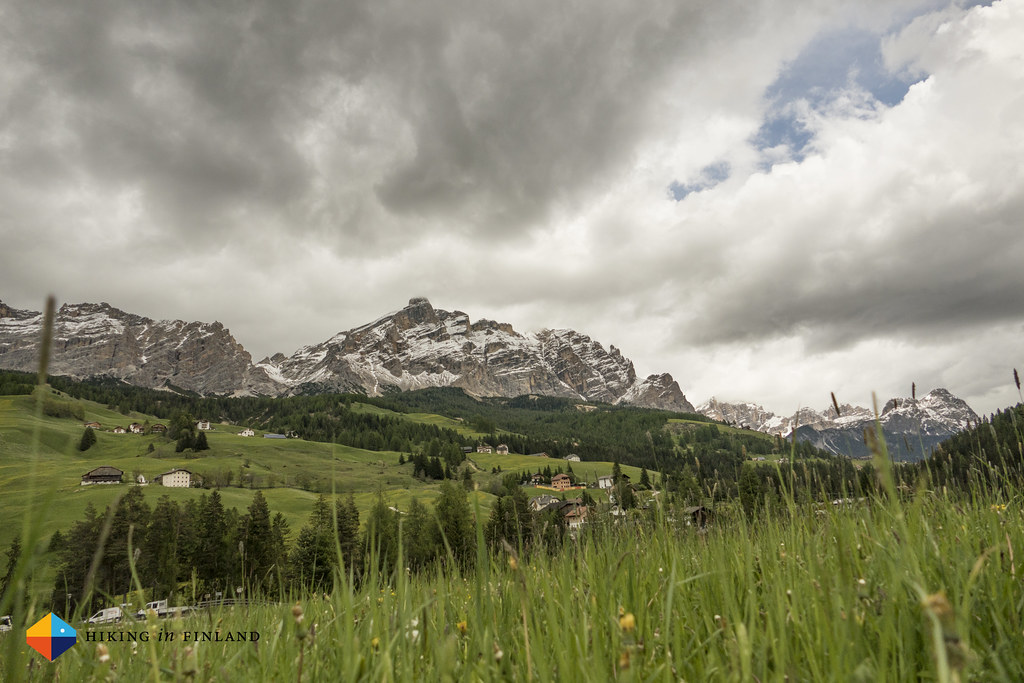 There are six Messner Mountain Museums and the region Kronplatz has two: Ripa in the old, beautiful Bruneck castle and the brand-new Corones which opened this summer after my visit. We went to Ripa and really enjoyed it, especially the Meditation cellar with the beautiful music was a real highlight for me, and I could spend more time in such a place:

At Ripa the exhibition presents mountain people from Asia, Africa, South America & Europe, and reflects on their cultures, religions and tourism activities in their regions. There’s quite a bit if original art which was very beautiful and inspiring, as were the different views on the cultures and how the mountain people have lived. The main tower has a viewing platform which has a great view of Kronplatz Mountain, Bruneck and the valley. 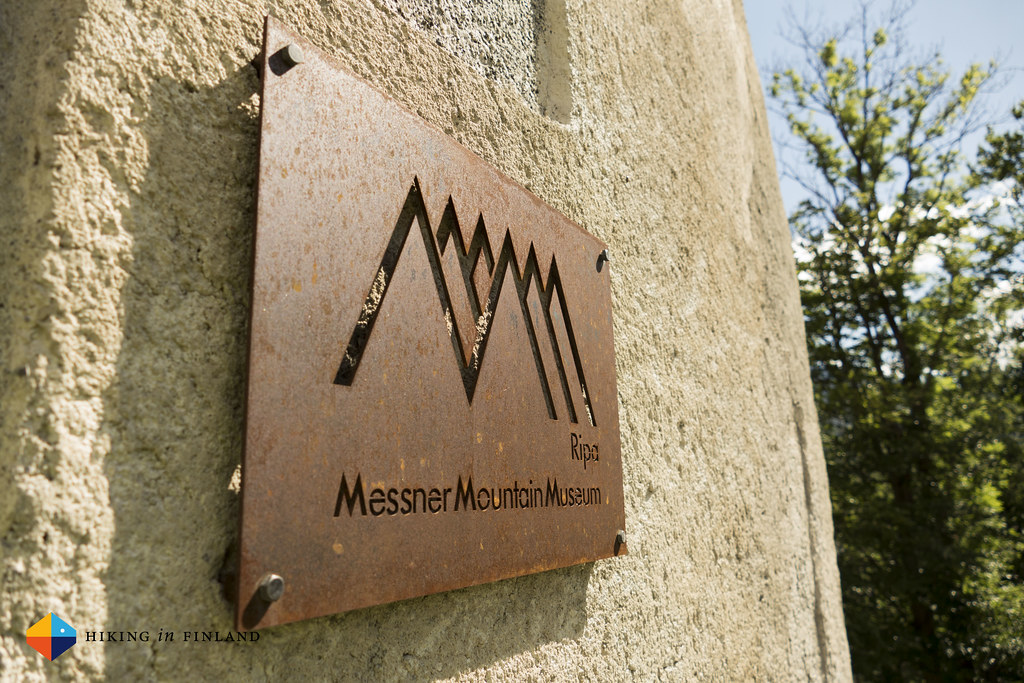 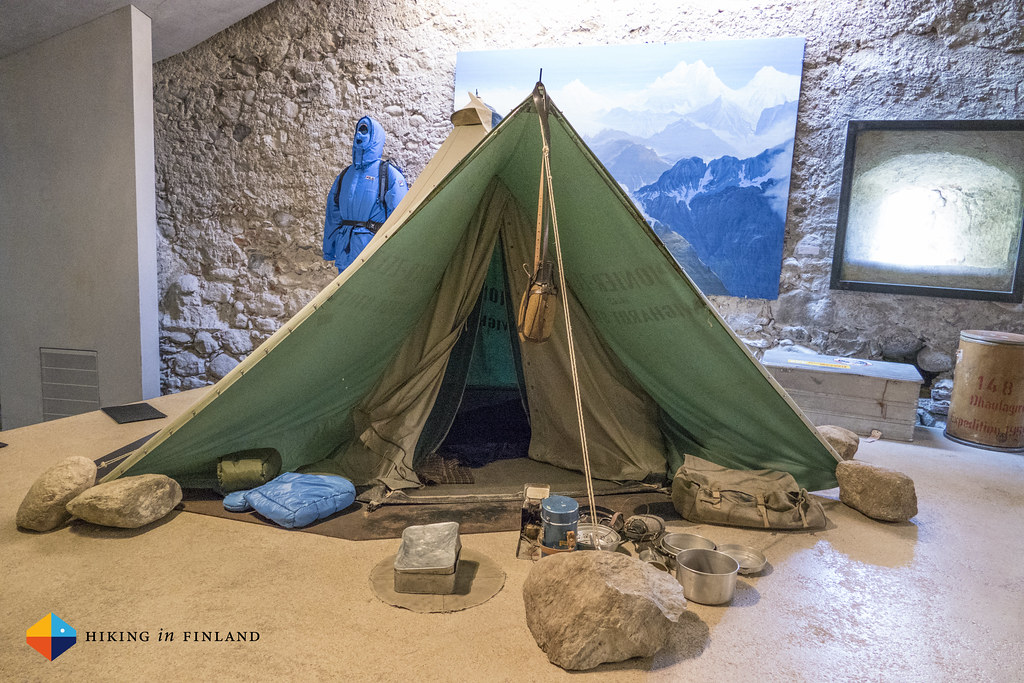 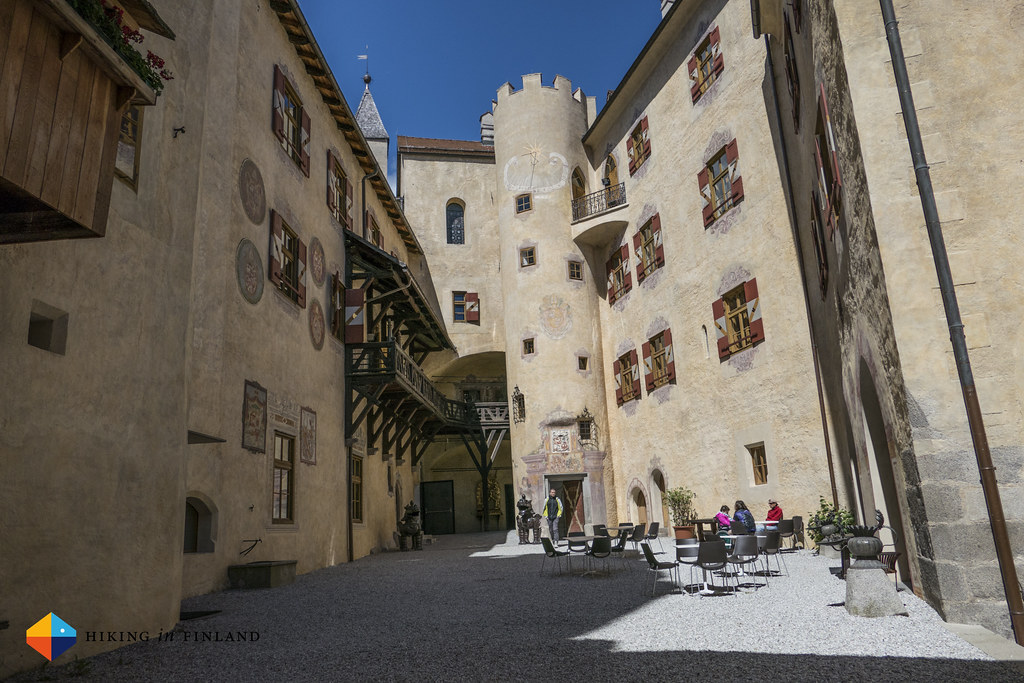 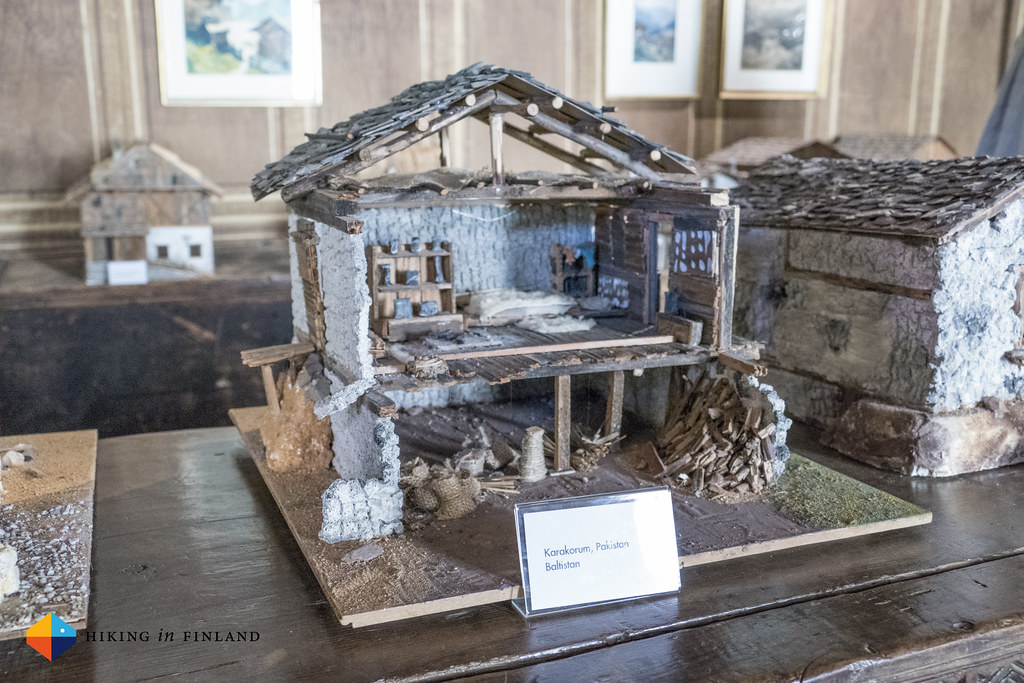 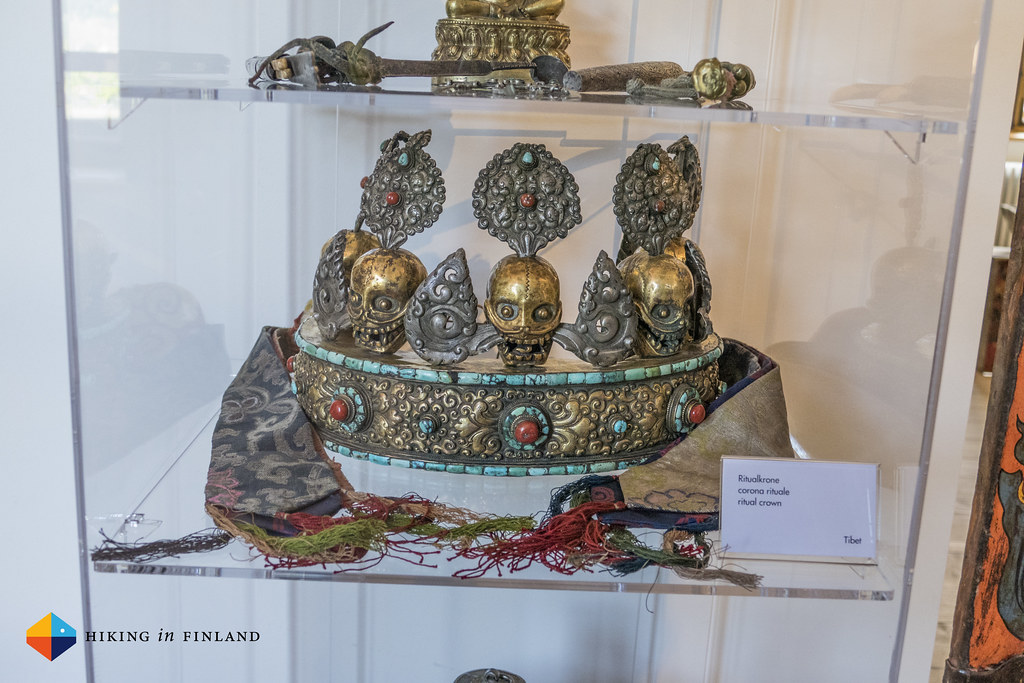 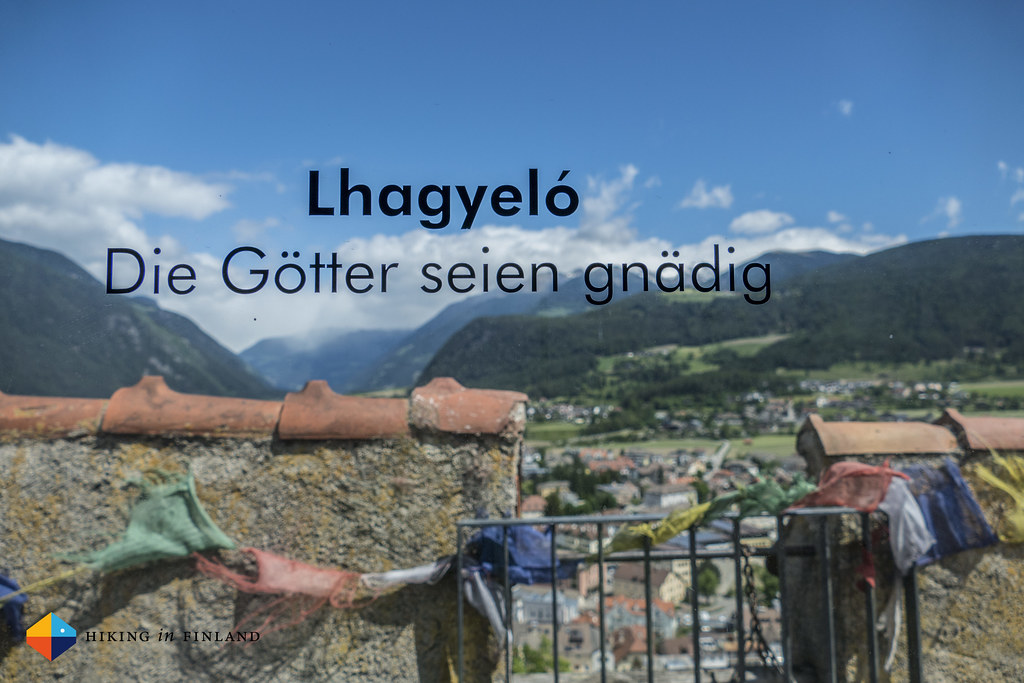 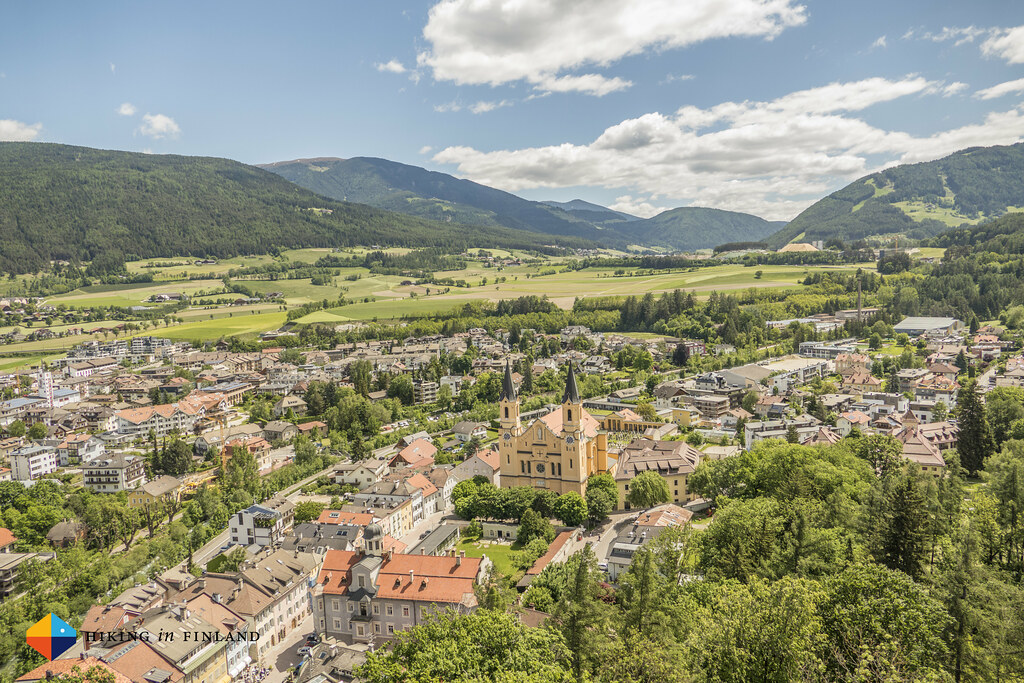 Hiking up to the Kronplatz

After the visit to the MMM we went for a stroll through Bruneck, had some light lunch and a coffee and then decided to hike up to the Kronplatz. After 14 o’clock we left the hotel with our light packs for the summit, and the staff was a bit concerned that we might not make it to the top and back as it was supposed to be a long walk. The signs suggested that one needs four hours from Reischach to the summit, though we did it in about two hours. 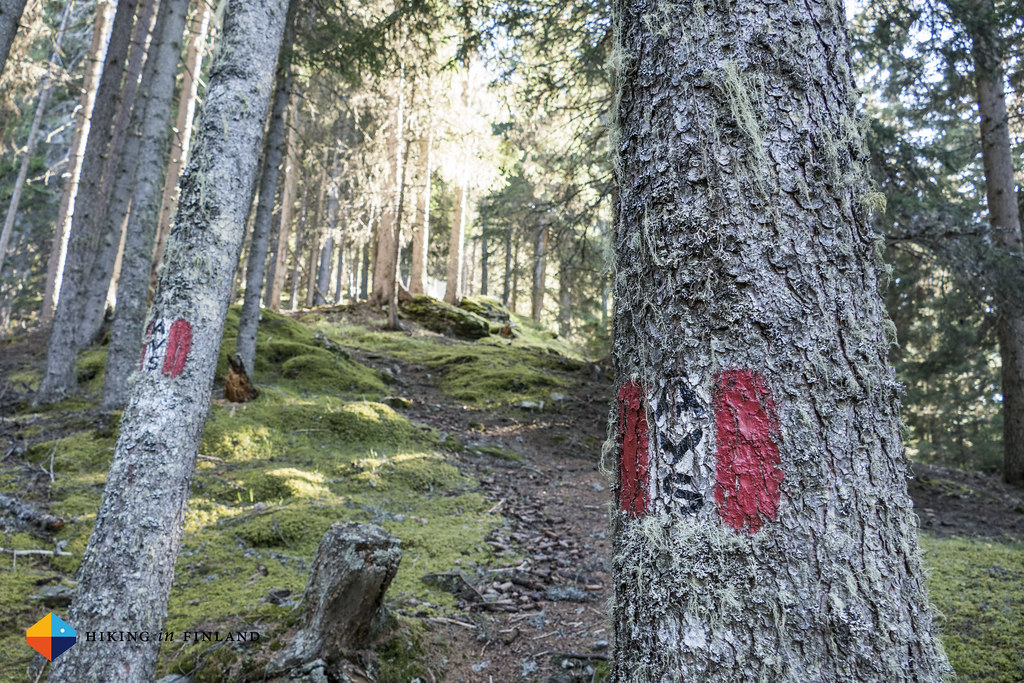 The AVS trail up was OK, it was a tad boring at times but it was an efficient trail which didn’t make any detours, which at least I appreciate. At the top it was windy, and the noise from the construction site for the sixth and final Messner Mountain Museum also wasn’t pleasant, but the views were great. From the top of the Kronplatz you have a great view on the Dolomites - if you don’t mind the ski lifts and water reservoirs. Alas, those are a part of the modern ski business. 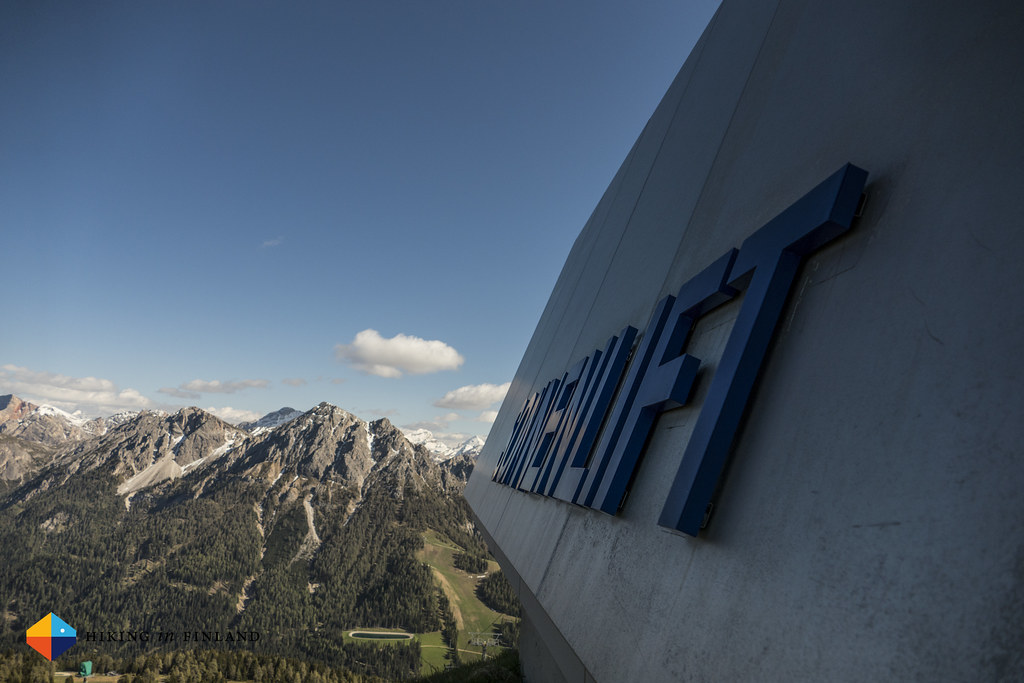 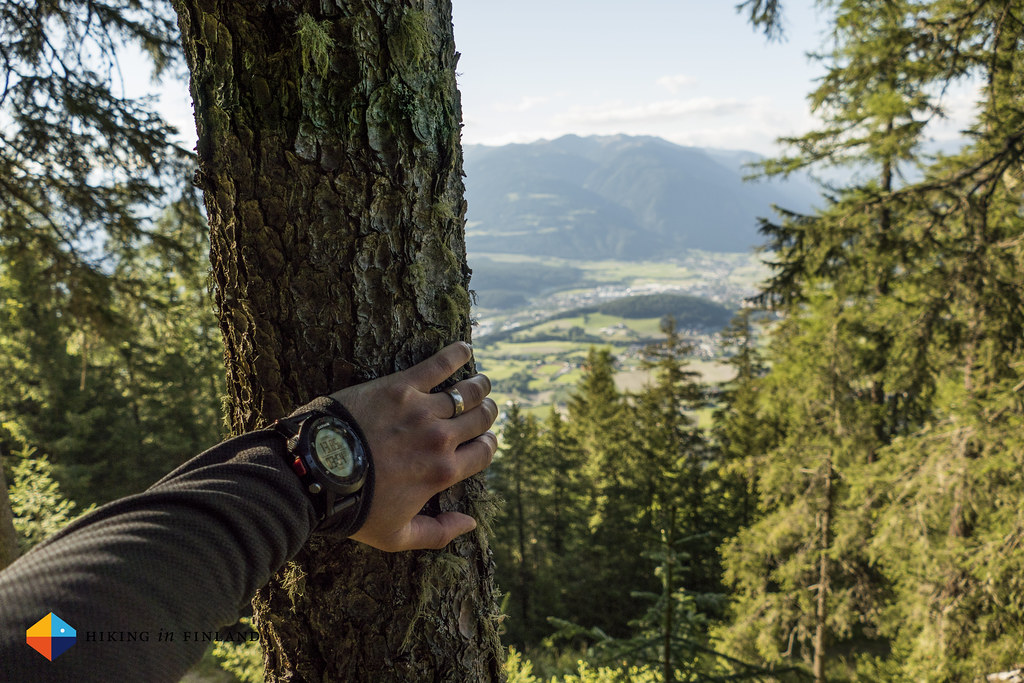 After hanging out at the summit plateau for a while we headed down again, and the narrow trail sections were so awesome that I just needed to run parts of them down! The light of course was getting much better the lower we got, and we both lamented that we needed to head back down for dinner! In the end we did the ~1000 m of ascent in around 5 hours up and & down, so if you’re a fit trailrunner who looks for some vertical this might be a nice hill to run up and down. 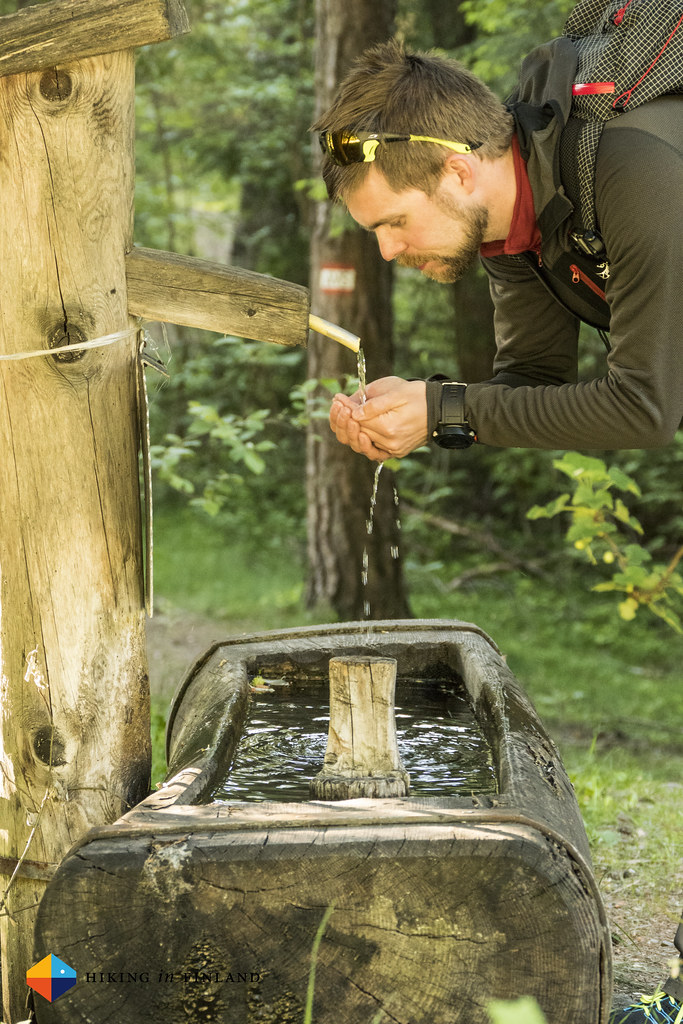 We actually wanted to fly the previous day, but the strong winds didn’t allow us to start. At 7 o’clock in the morning, three hours before our train would leave again, Chris messaged me to let me know that he’ll pick us up at 8 o’clock and we would go paragliding! Vincent and me were ecstatic that it would work out after all. Punctually Chris and Leo from tandemflights Kronplatz picked us up and we were in no time again at the summit of the Kronplatz where we had been just the previous afternoon. Just that this time we would be flying down instead of running the trails =) Leo & Chris had the paragliders deployed in a couple of minutes, gave us instructions of what to do during take-off and landing, and then we were just waiting for the right wind. Once that moment came we were off in the air. 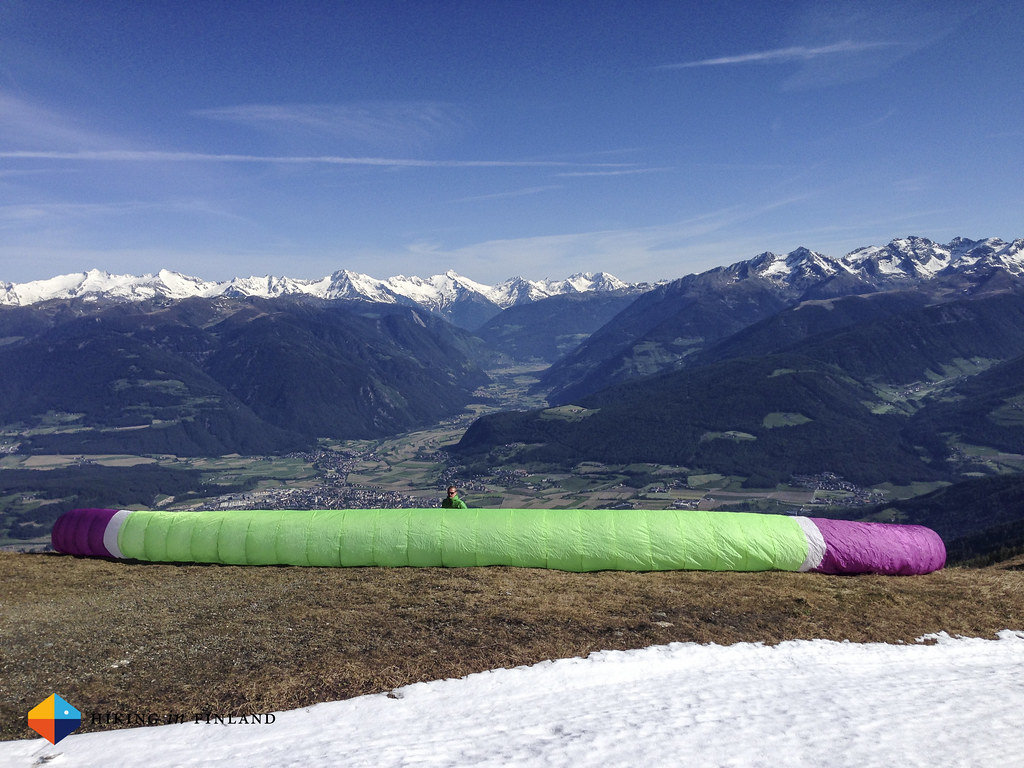 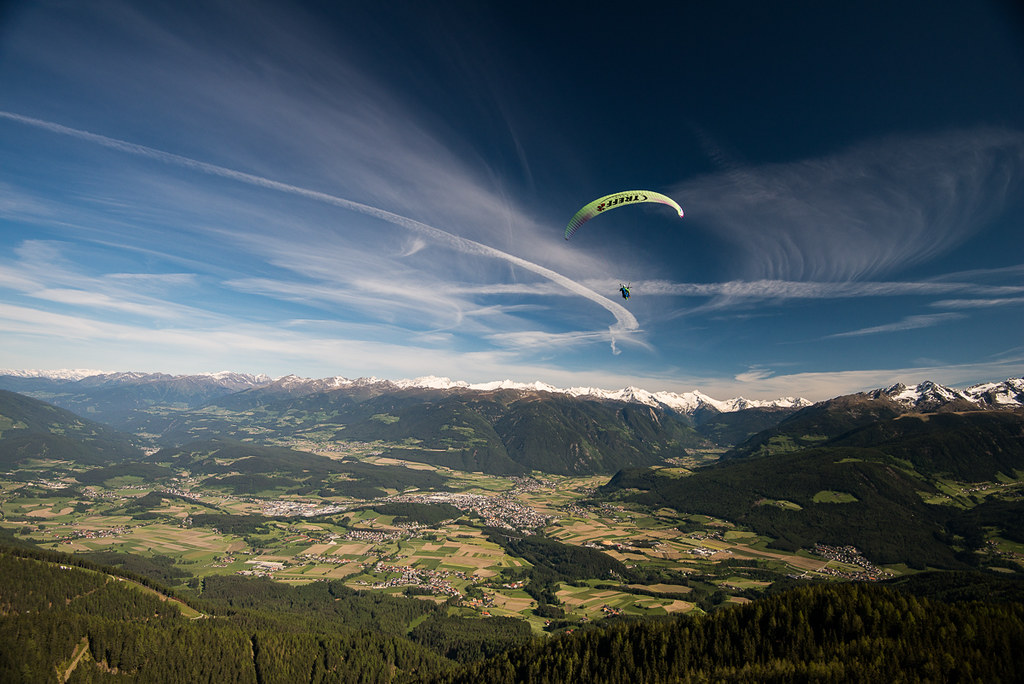 This was my second time paragliding and it was just as exciting as the first time. Even Chris and Leo, who have tens of thousands of flights between each other, had big smiles and were enjoying the great wind & weather on this spring morning. We were some 15 to 20 minutes in the air until we came closer and closer to the ground, flying over freshly cut fields and walkers on their way to the summit. 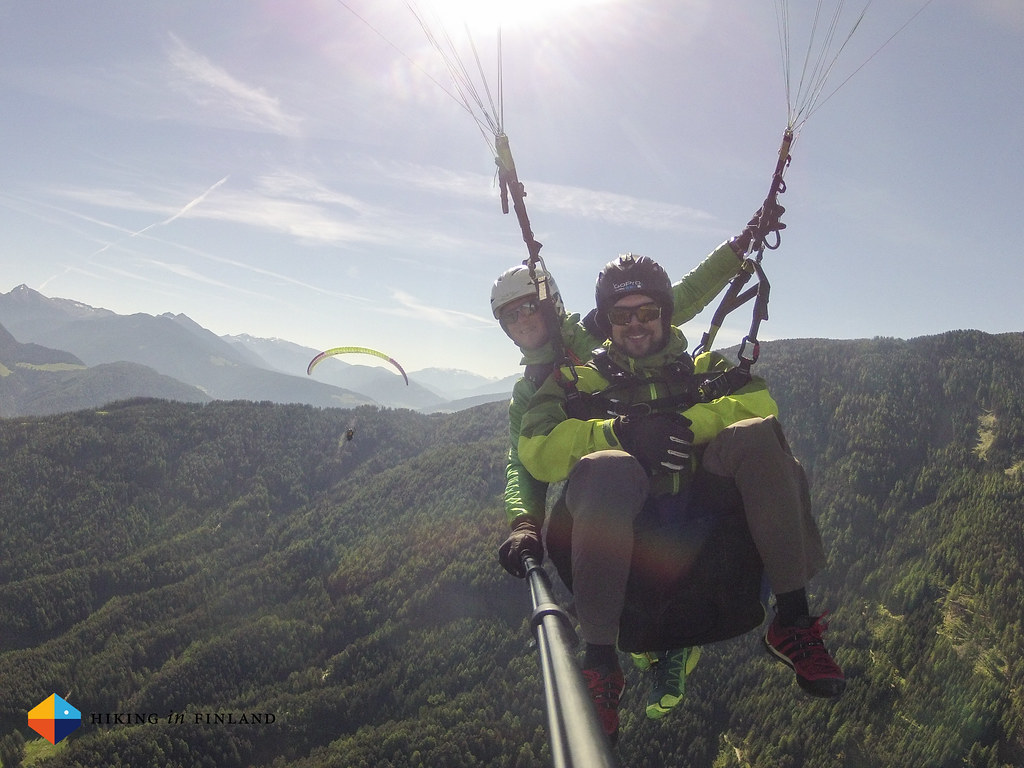 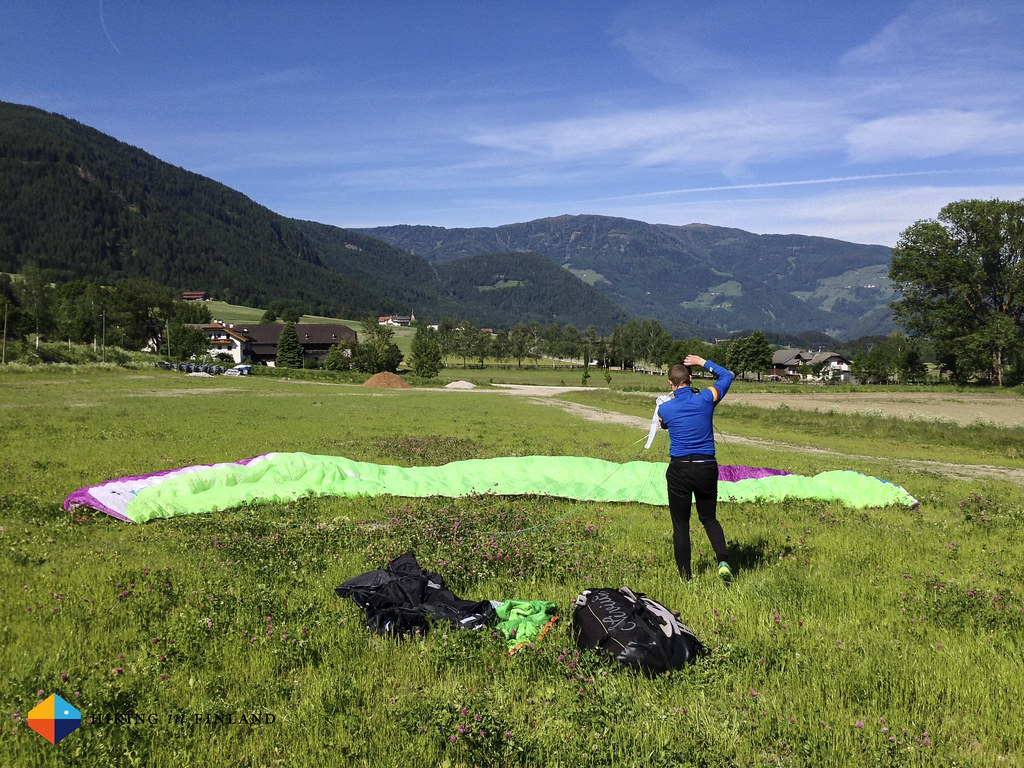 Off to South Tyrol

I love South Tyrol. I imagine it has to do with the family holidays that I spent there as a child, the friendly people, tasty food, the Dolomites and wonderful scenery. If I’m free to go wherever I want, chances are I will pick Südtirol. And if you like mountains, beautiful nature, great National Parks and trails, friendly locals and delicious food, chances are you too will love South Tyrol - so give it a try on your next holiday. 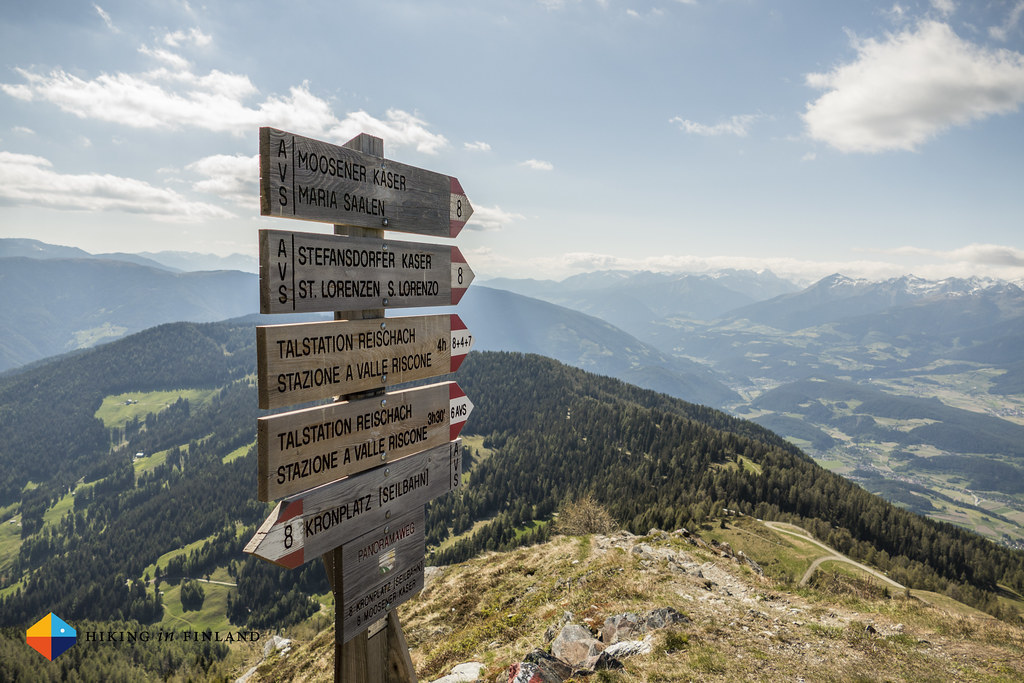 I travelled to South Tyrol via München and then took the train. It is a pleasant journey and if you’re in no hurry then I can recommend this. The Mobilcard Südtirol allows you to travel with all busses and trains in the region and is ideal if you arrive with public transportation. You can take bikes along in the trains which makes bike tours through the valleys very easy - drive to your destination and hop on the train back or vice versa. Best of all, if you stay at a hotel in Südtirol you will often get the Card for free. 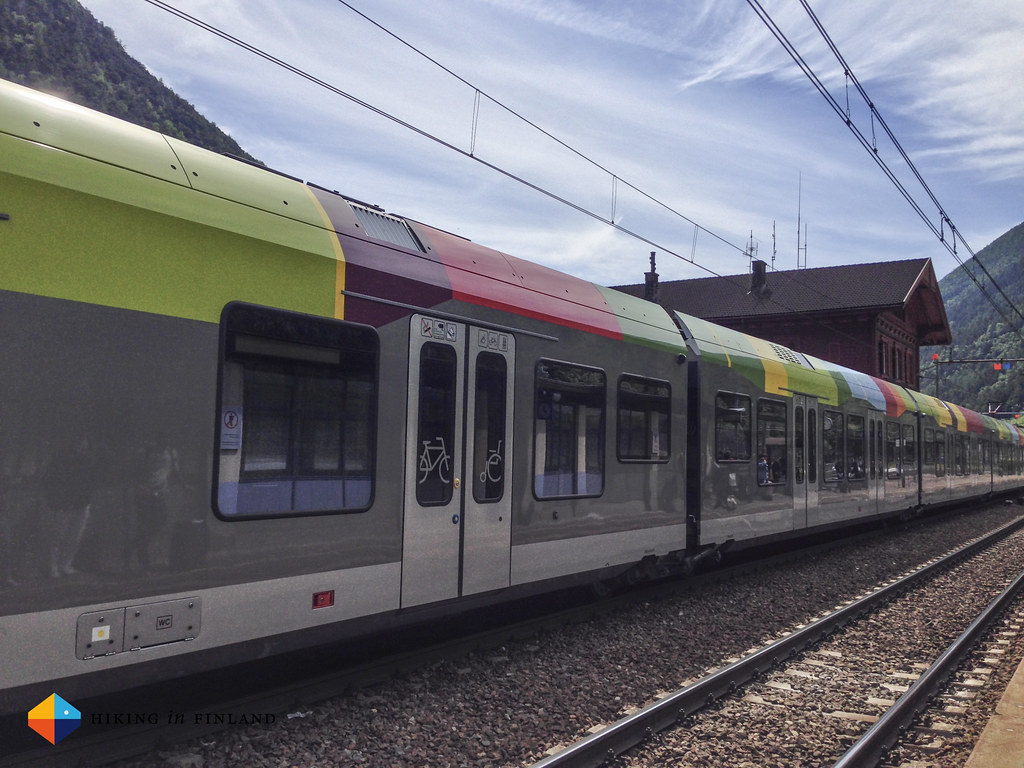 I stayed at the superb Rubner Hotel Rudolf which delighted me with its very friendly staff, tasty food, comfy bed and relaxing sauna. It’s a great hotel 15 minutes walking outside of Bruneck in Reischach and an equally long walk to the lift station, so in a great position. They have affordable prices for summer so would make for a great hotel to base yourself for a week - the Sauna and swimming pool were superb and very clean, and make for a great way to end a mountain day - be it hiking, climbing or paragliding. A shuttle to the railway station and back is included, too!

Bruneck is a lively town which has everything to offer what you might need for an active week in South Tyrol. I counted a handful of outdoor and sports shops, a dozen cafés and a few supermarkets for snacks and local delicacies. It has its own railway station and also is easy to reach by car if you prefer that. 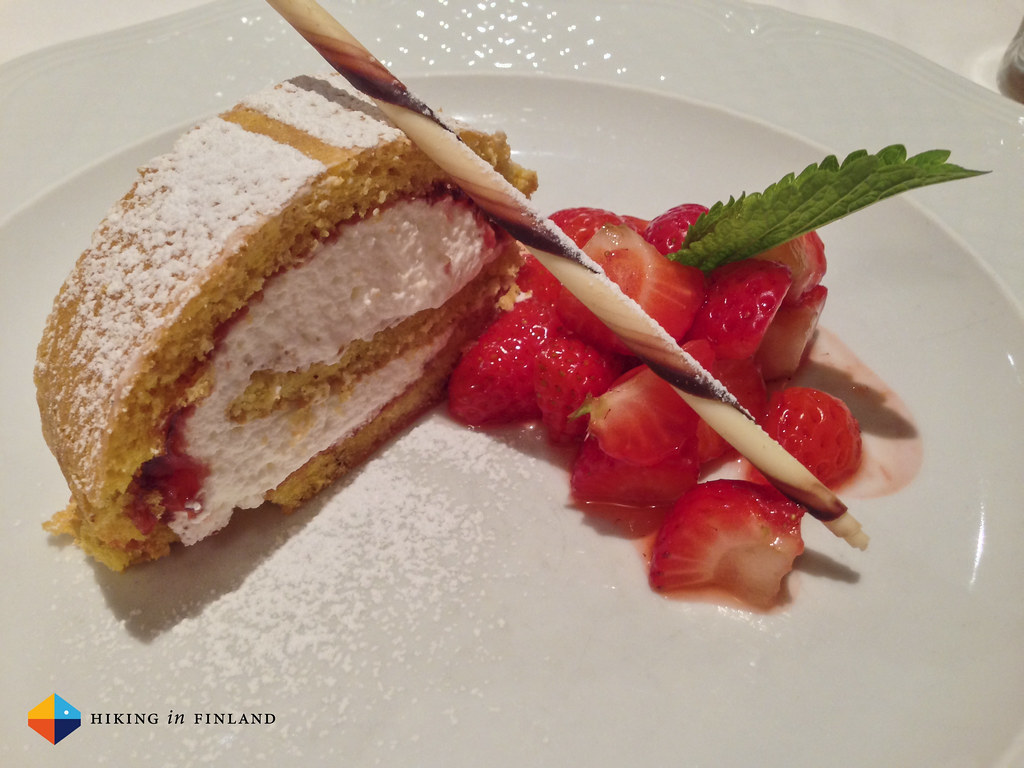 Thanks to Kronplatz and Maro and Partner for making this trip possible.