The whole story started last year in September, when some of the members of the trekking-ultraleicht.de forum were looking for a destination for their inaugural winter tour, called TUFWT 1.0 (stands for Trekking-Ultraleicht Forums Winter Tour, in case you're wondering). I threw Finland into the round, the people liked it and so planning and organizing commenced. 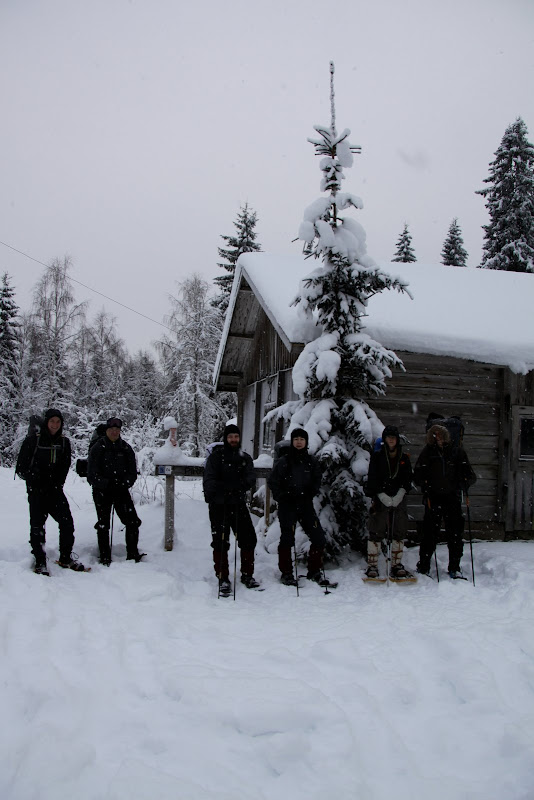 Six brave UL backpackers arrived on January 29th in Tampere, and after making the last errands they all lay down to sleep in my apartment. Saturday morning I served them a good breakfast, and at 11 o'clock we sat in the bus to Kuru, from where we would start our journey. The first day we walked 12 km, and for whom this sounds not much let me tell you that if you have seven persons in total you are smart when you plan short distances, as different people have different speeds, need breaks at different times, and generally the whole process is a lot slower as if you're alone or with just one other person on the trail. Anyhow. 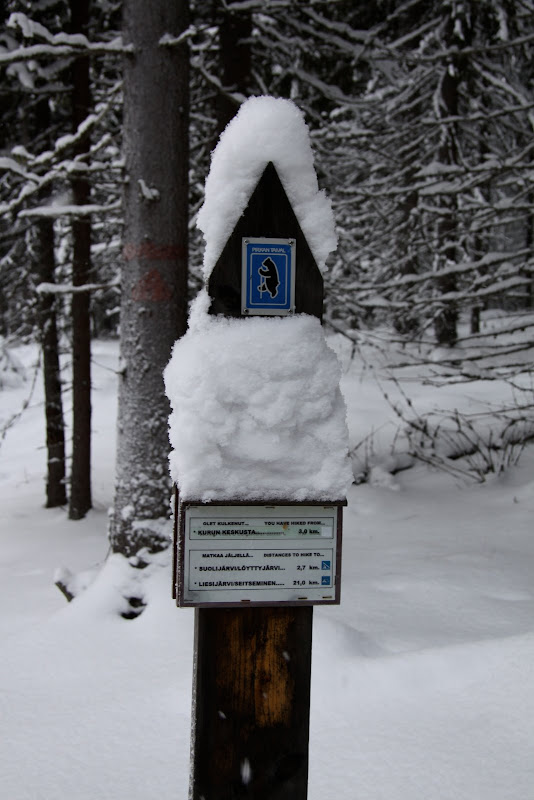 The first kilometers along a street were easy and quick. 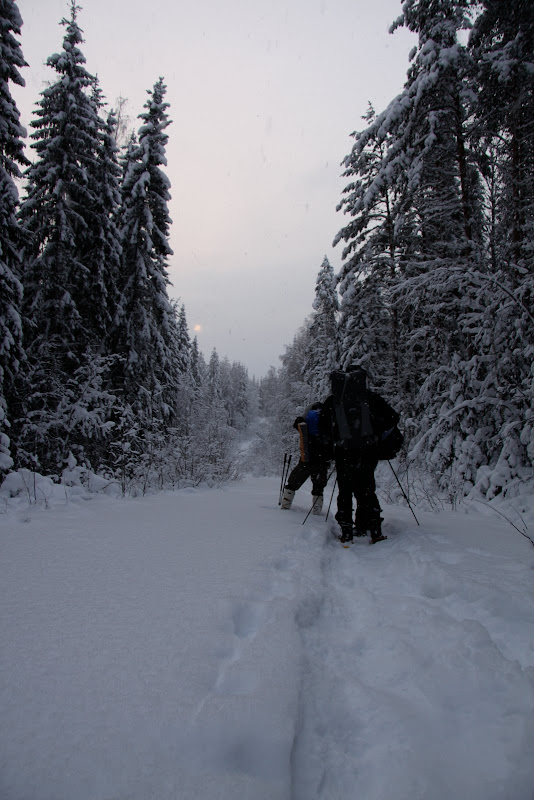 But soon we were walking in the forest, and the speed decreased.

We arrived at dusk at the lean-to shelter, and quickly a fire was made and the sleeping spaces picked - all seven slept in the laavu that night! Snow was melted, some beers were opened, food was made, and laughter and chatter could be heard over the hill till late at night. 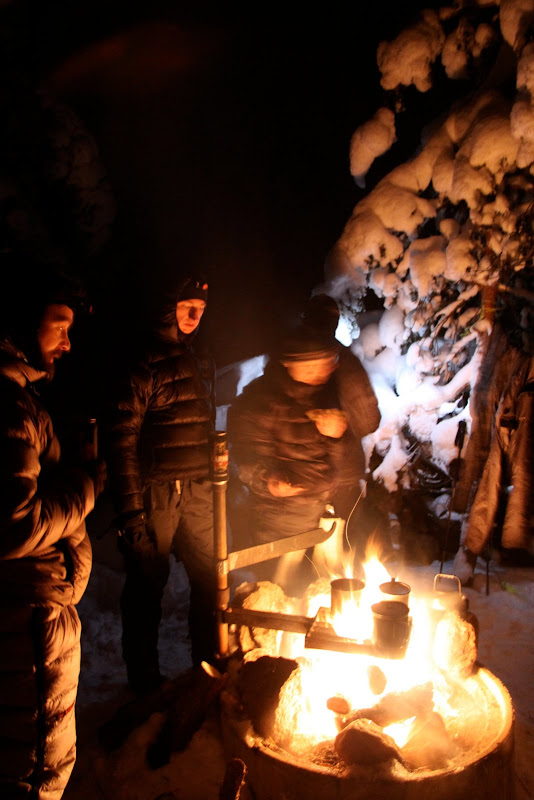 The party gathers around the fire. 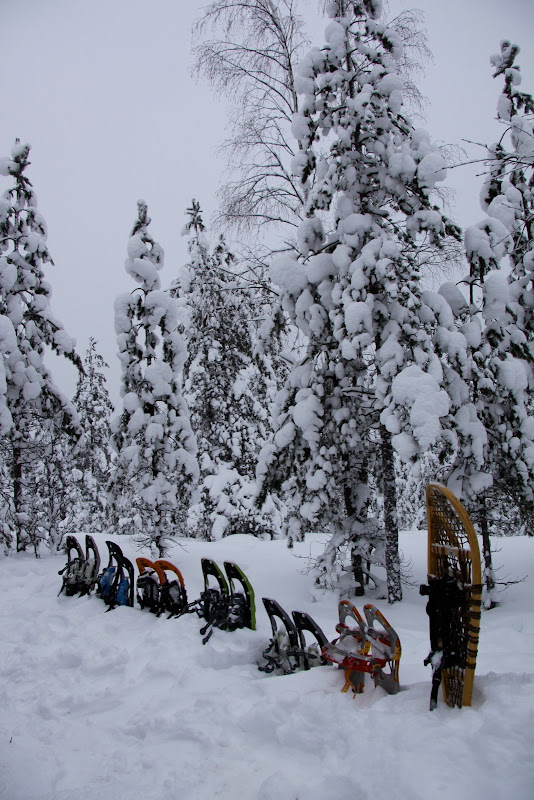 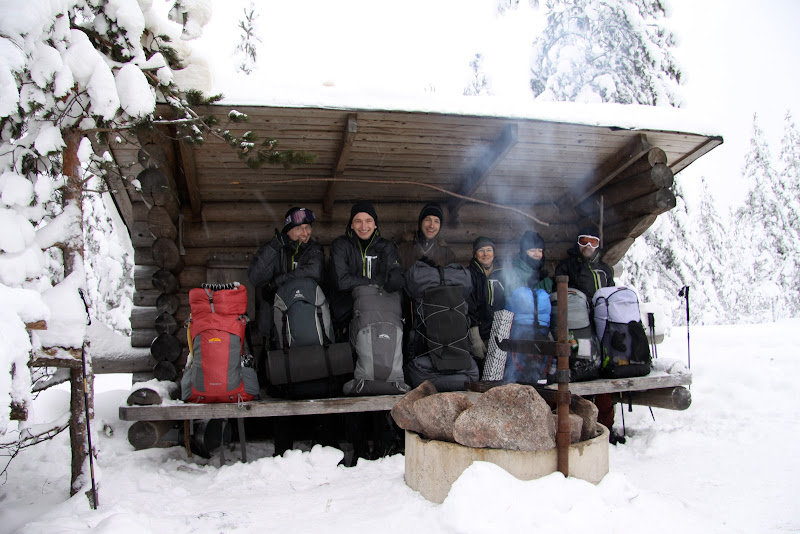 The crew behind their backpacks, in front of the first night's camp place.

It took me a while to get them six all packed up, fed and ready to walk the next morning, but by noon we were finally on the trail. Photo breaks, re-hydration breaks, and snack breaks all took their time, and around four o'clock in the afternoon we reached a lean-to where we made a lunch break. By the time we left the lean-to we still had five kilometers to walk, while night fell. Four of the seven had a Fenix HP 10, which is a splendid headlamp if you need to walk at night - my Tikka Plus is rubbish for night hiking, and a Fenix HP 10 shall find its way to me soon. 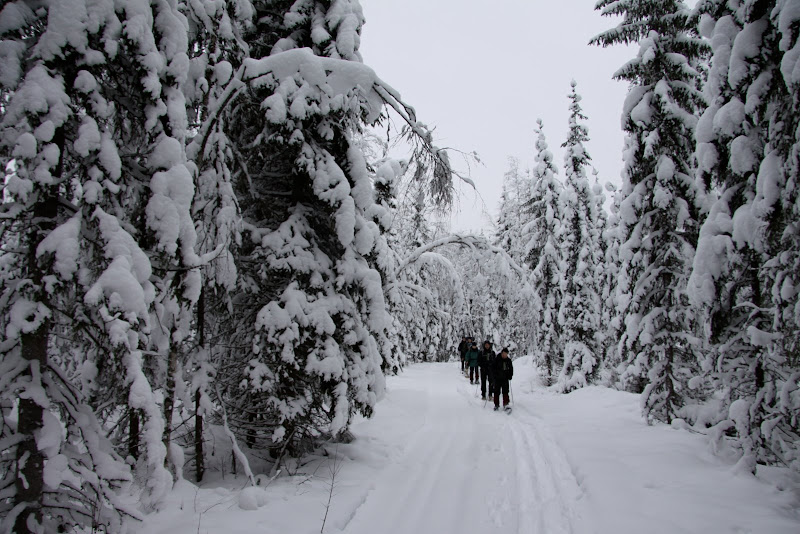 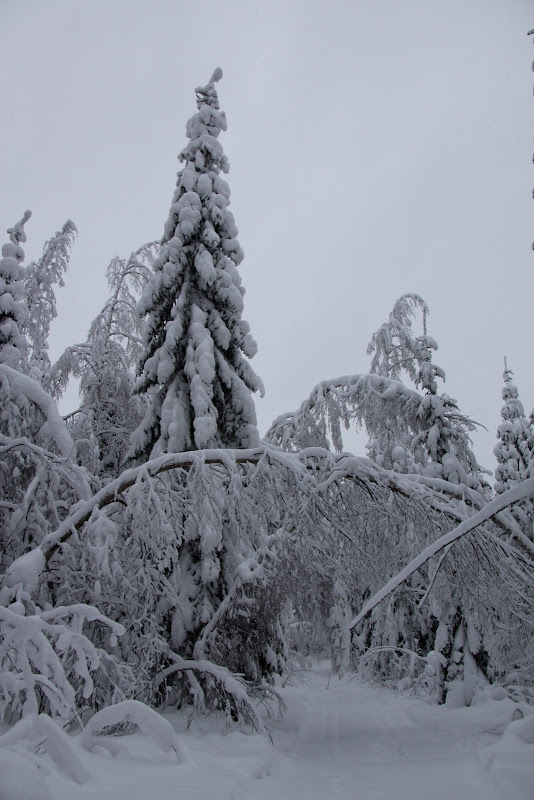 It was around eight o'clock when we reached the campsite in the Seitseminen National Park, and pitching the shelters started. A Gatewood Cape, a Vaude Power Lizard, a MYOG Laavu and three (!) Laufbursche Tanzpalast shelters soon stood on the ice and under the trees. A fire, very welcome with the strong wind and snow we had, was made and the group huddled around the flames while food was made.

Well fed we all crept into our sleeping bags and quilts and called it a night. I was sleeping under a Laufbursche Tanzpalast, a tarp/ shelter hybrid made of silnylon. The weather forecast said that we wouldn't have lower temperatures than -6°C, so that I only packed my GoLite Ultra 20° for the trip, together with my Klättermusen Loke and Rab Microlite Vest for the torso and a MYOG down pants which I borrowed from Markus. The missing piece in this list was the VBL suit I planned to make but didn't have the time for. Around five a clock in the morning I woke up, quite cold from above (my mats kept me super warm from beneath!). The GoLite Ultra 20° had collapsed and I could feel the ice between the inner and outer layer. Realizing that I could forget about sleep now, I got up and started a fire again, which worked after the second try. Warming myself up, I watched the moon disappear behind the trees and cherished the sun which rose. A look on my small Suunto thermometer told me the temperature was around -17°C that morning. 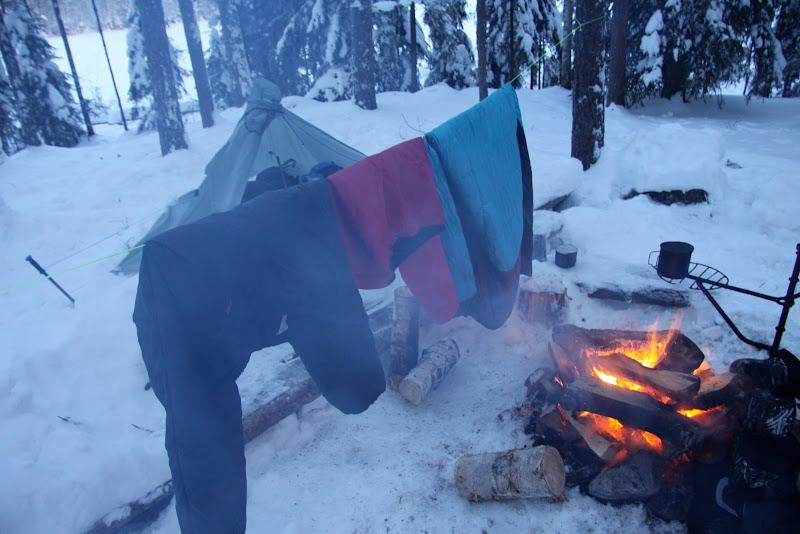 Drying the Ultra 20° and my Primaloft clothes for the coming day. 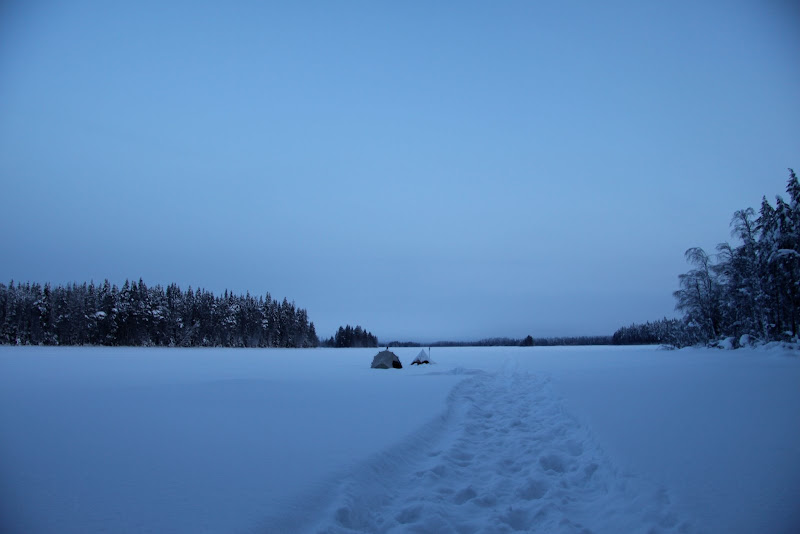 Two brave UL backpackers pitched their shelters on the middle of the lake, on 30 cm thick ice. 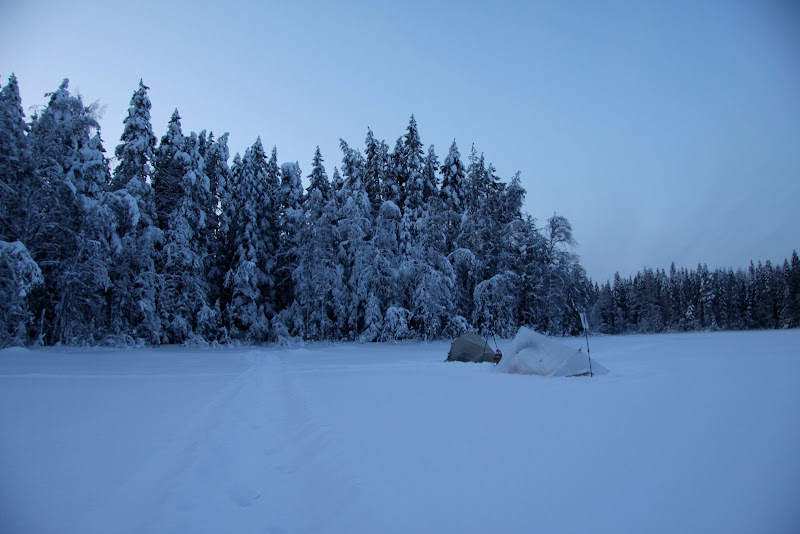 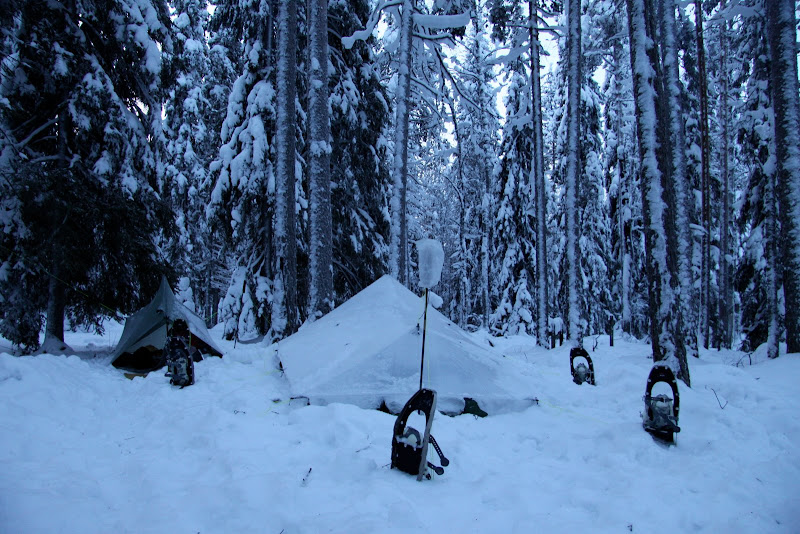 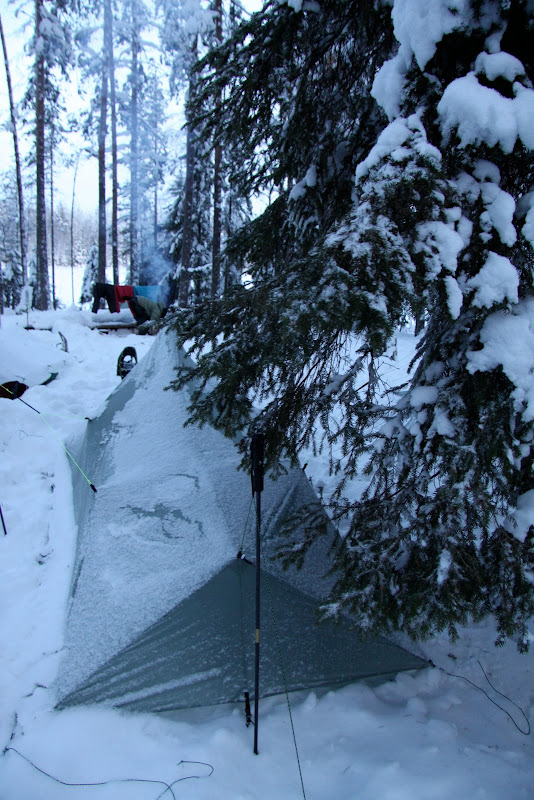 After all were up, melting snow and eating breakfast commenced, and by 11 o'clock we were again on the trail. It was a sunny yet misty day, and we walked in peace through the National Park. We made our lunch stop at the old Kovero croft at three o'clock, where my feet started to get cold from the lack of movement which kept them warm during the afternoon. Again not having VBL socks made me realize that its an important piece of equipment in this time of the year. Happily my fellow backpackers came to my aid, and gave me 6l plastic bags and a pair of dry liner & merino socks before I would have gone ahead with my stupid idea of pouring hot water over my shoes (Why is that stupid, you ask? Mpemba Effect, they told me). With fresh socks and a VBL my feet soon were warm again, and the last five kilometers to the Teerilampi Cabin we walked in a good mood, knowing that a Sauna, fresh vegetables and beer would be waiting for us. 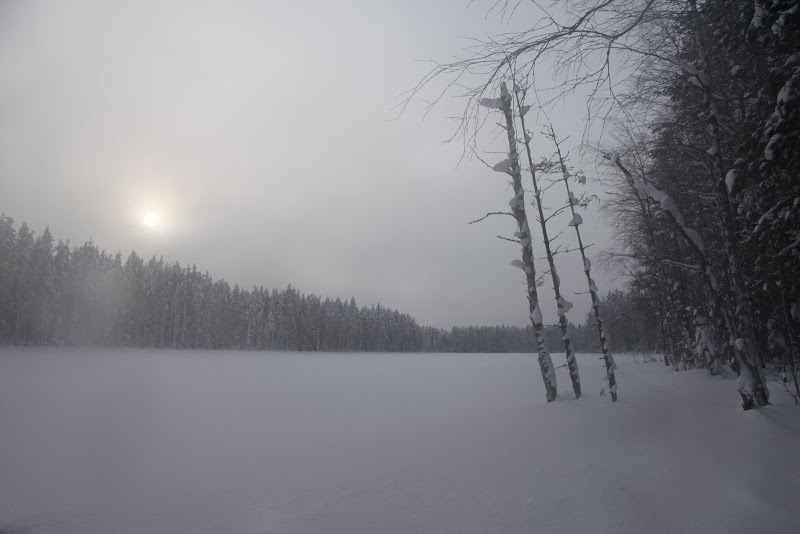 On a snow covered lake, the sun shines down on us. 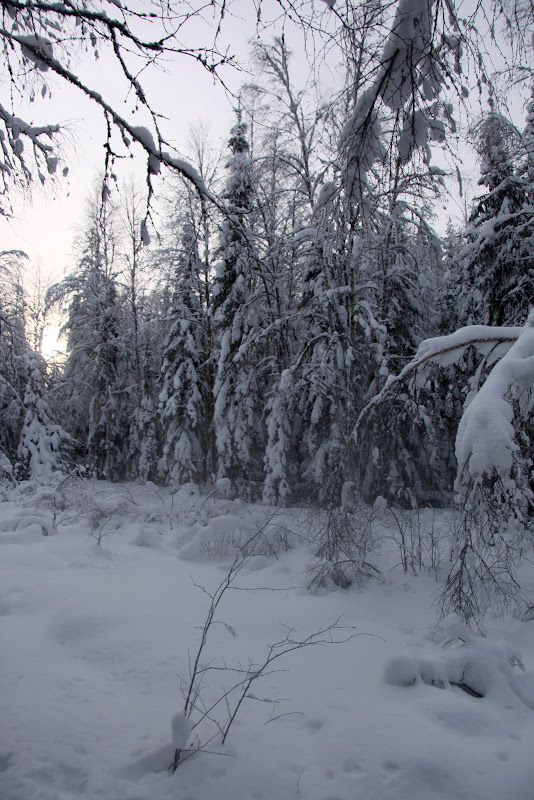 The next four days and nights we spent at the cottage, talking gear and trips, went ice fishing, build an igloo, went to the sauna and swimming in the icehole every night, and enjoyed the pleasant surroundings of not seeing anyone else around. Small daytrips from the hut were made, playing Carcassonne and enjoying the good food; we really had a good time in fantastic company. 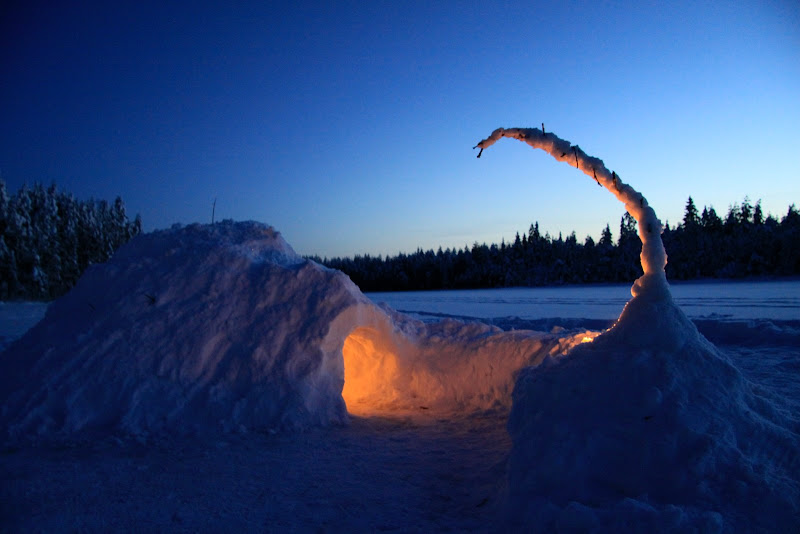 Our quinzee at dusk.

Lessons learned? Skills and knowledge are more important than gear. I reckon if I hadn't been able to get a fire started after my quilt collapsed, things could have taken a turn to the worse. Fire making is an essential skill if going to the outdoors, to be able to melt snow/ boil water/ cook food/ get warmth is so important that I will practice making fire now even more.

It wasn't too smart of me to trust the weather forecast and only take gear which kept me warm till around -12°C. The missing VBL will be made asap, and no winter tour will take place without one for me in the future. Also the idea of having a Platy filled with a hot bouillon when going to bed, from which one can take a mouthful when waking up at night, will be adopted by me for future trips. At some point my body just doesn't produce any warmth anymore, and a mouthful of warm soup will be enough to keep my body going and produce more warmth for the rest of the night, giving me a good sleep. 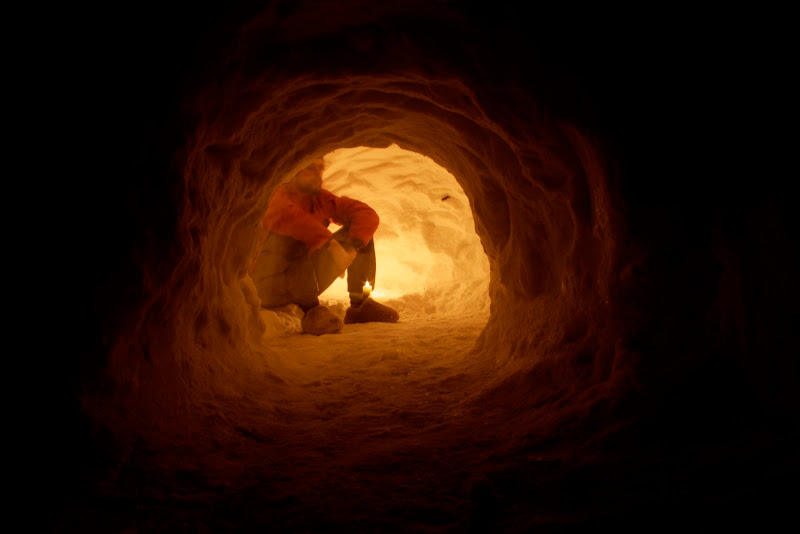 More on gear that worked and gear that didn't this coming week, when I find the time between getting healthy and work. However, most importantly, I'd like to thank the six for coming here and go hiking in Finland Winter Wonderland with me. We were strangers as we met, but left as friends. So thank you, and I hope we meet soon again for more UL madness!